Woman, 35, who was ‘groomed’ by QAnon, says her ‘worldview collapsed’

A high-flying PR executive who claims she was “groomed” by QAnon says her “entire worldview collapsed” after she stumbled upon the online conspiracy theory group on yoga and wellness pages.

Melissa Rein Lively, 35, of Arizona, made headlines last year after images of her went viral in which she destroyed a display of face masks before telling police she was a “White House and QAnon spokesperson.”

She was indoctrinated into QAnon – a conspiracy movement that believes Donald Trump was waging war against a cabal of satanic, cannibalistic pedophiles who are forming a “deep state” and pulling the strings of governments around the world.

Isolated during lockdown, Melissa first came across the group’s content while browsing “spirituality, wellness, health and yoga groups” on social media – but soon fell down a dangerous rabbit hole.

When she appeared on Finding Q, a podcast exploring the shadowy figure behind the movement by British journalist Nicky Woolf, she said she was suicidal after joining the group and that the thrill of the experience ’20 years of her life cost life’.

“I know it’s really easy to see this at first glance and say, ‘These people are idiots,’ but I’m telling you these are some of the best-produced, well-written stuff that was very plausible, and I realize that there is a huge industry for conspiracy theories.’ 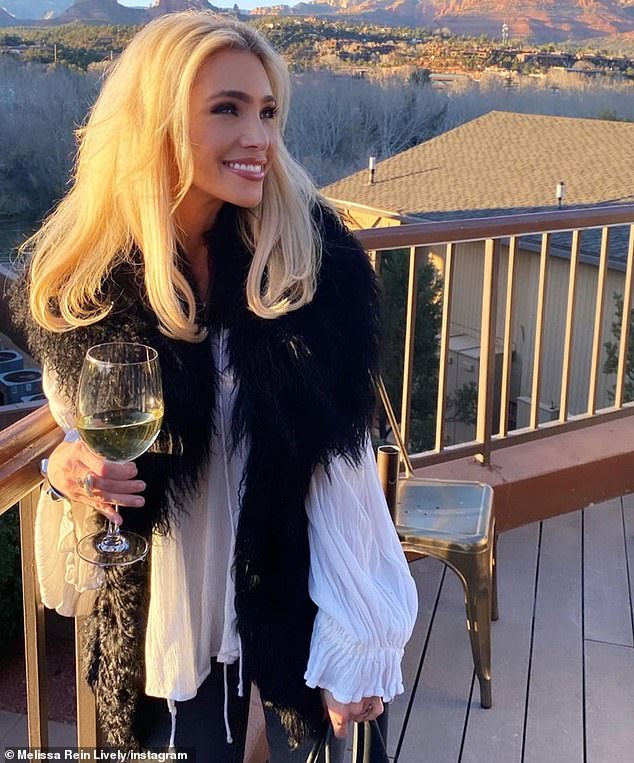 Melissa Rein Lively, 35, from Arizona (pictured) claims she was ‘groomed’ by QAnon after encountering the online conspiracy theory group on yoga and wellness pages

“I definitely call it a cult in every way,” she said. “It completely destroyed me, collapsed my worldview and ended up in a psychiatric evaluation facility.

“For me, as a successful person in my life, I never thought I would be in a situation like this and it was a low point.”

Melissa first learned about Covid-19 in January when her brother called her from China, panicking and warning that a new virus was rapidly spreading across the country.

Melissa, a self-confessed germ phobe, was terrified and followed her brother’s advice to buy masks and gloves en masse — an attitude she later said was “totally reversed” after she joined the conspiracy group. 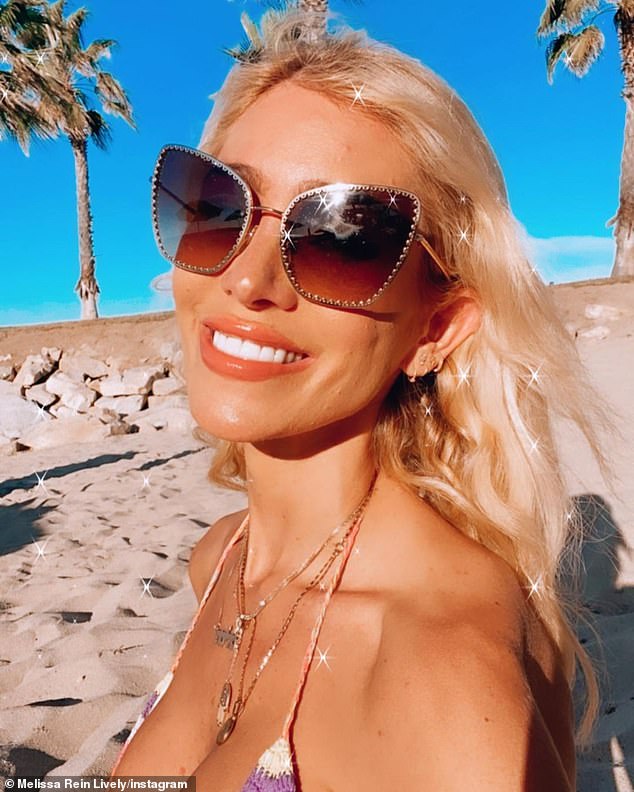 During the lockdown, Melissa admits she was ‘lonely’ at home and spent a lot of time online, soon stumbling upon seemingly innocuous messages from the conspiracy movement on pages related to her interests.

“If they call it a rabbit hole, it starts at the top, on the surface with very innocuous information and as you click and click and click, the algorithm does its thing,” she said.

Over time it becomes more and more extreme and the confirmation bias you experience changes the way you think and causes you to believe a separate set of beliefs that you previously held.

“If I had seen it right away, Hilary” [Clinton] being a baby-eating pedophile, I was like, “Okay no.”

She says one way users are indoctrinated by the group is by linking certain conspiracy theories together — telling browsers that if they believe one, of course they should believe the other.

“It’s incredible and amazing how effectively QAnon has managed to create an umbrella over every conspiracy theory imaginable,” she said. ‘Thus thinking is really transformed and nurtured.

“When I look at a Venn diagram, there’s an area in the middle where all those interests and beliefs come together. One of the ways QAnon appealed to people, which I realized was the starting point for QAnon, was “vaccines are dangerous.”

As her food was dripped with group content, Melissa became less in touch with reality and began to believe the content she was consuming fully,

‘You stop looking critically at things, ‘is this true, is this true?’ especially in times of crisis. You start to look at everything from the perspective of “What else are they lying about?”.’

Internet users who browse QAnon content often see messages asking them if they want to “take the red pill” – a reference to the 1999 movie The Matrix, taking the red pill means being willing to take a learn potentially troubling or life-changing truth.

‘We don’t want to do this anymore’: the expletive breakdown that led to Melissa being hospitalized

The video was uploaded to the Instagram account of Melissa Rein Lively, who ran a public relations firm in Scottsdale, Arizona, and was reposted to Twitter on June 4, 2020.

‘At last we come to the end of the road. I’ve been looking forward to this all my life,” she said as she filmed a rack selling various face masks in a Target store.

She then aggressively rips the masks off the shelves and throws them to the floor.

Two Target employees then approach her as she makes her mess and say, “Ma’am, can you please stop.”

A second video, filmed on Instagram Live on the profile of The Brand Consortium, the marketing brand Lively is the CEO of, shows police arresting her at home after the Target incident.

In the clip, Lively claims she is a spokesperson for QAnon and the White House.

“I’ve been hired to be the QAnon spokesperson,” she said in the clip, adding that police can “call Donald Trump and ask him,” claiming not to share “classified information.”

“I can’t remember the exact moment I took the red pill,” she said. “I remember seeing those graphics, which were basically screenshots from that movie, and I remember thinking, ‘Of course I’m going to take the red pill because I want to know the truth.'”

After taking the ‘red pill’, Melissa became completely absorbed in the core of the group, including that ‘a shadow government pulling all the strings behind the scenes’.

“I believed there was a mechanism of that shadow government to perform a genocide on the world’s population by carrying out a health crisis, a man-made bioweapon like Covid-19.

“I believed there was a massive pedophilia gang in which politicians and business elites participated in human trafficking and child sacrifice for personal satanic use.”

Her view of Covid also changed, with the PR executive admitting she was sucked into the “completely alternative view” of the pandemic and claiming the crisis was a hoax created for political reasons.

As Melissa’s relationship with her husband deteriorated, her health also deteriorated, and on July 4 she was living in a hotel, having panic attacks and being online for up to 20 hours a day.

“I was just alone in a hotel room,” she said. “Without my family, without my dogs, without my husband, I felt so much anger and rage about everything that had happened, everything in my life piled up on that day, as I saw my life in ruins.”

On that day, Melissa uploaded an Instagram video of her throwing masks on the floor and yelling at two Scottsdale Target employees, while bragging about her $40,000 Rolex.

In a second video, Lively filmed police arriving at her home after her husband alerted authorities when she told officers she was a spokesperson for the White House and QAnon and had been calling Donald Trump “all the time.”

When asked about her memory of the incident, she said, “It was a complete blackout. The things I did and said, it was so far out of my character.

“It was absolute rock bottom and I needed help. There was no way I could get out of that situation.”

She says the “breaking point” came when her husband sat down and gave her an ultimatum — forcing her to choose between the conspiracy group and her family.

“At that moment I felt that I had stepped into my own mission and if the world ended and they came to take us all to concentration camps, I would fight tooth and nail to save people and especially children,” she said. .

“So I looked at my husband and said ‘no’. I will definitely choose my mission because I know what to do, doomsday is now every day.’

After her husband performed an intervention, Melissa was hospitalized where she was diagnosed with post-traumatic stress disorder and spent weeks in therapy. 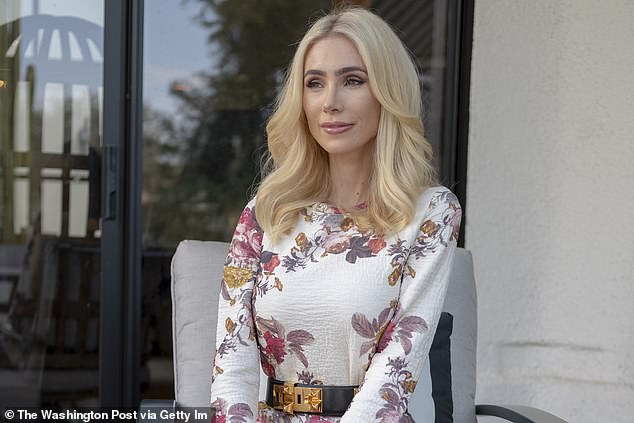 Now, eight months after the incident, Lively (above) has spoken out to reveal how her actions were the result of “radicalization quite effectively” by QAnon, ultimately “robbing her of my life.”

Melissa says she “absolutely” wants to know who the person or group is behind the cryptic posts of a character called “Q,” who first appeared on the anonymous user site 4chan in October 2017.

“I believed the whole story, that it was someone with Q-level approval close to the president in the government with access to declassified information,” she said.

She added: ‘I’m sure this probably took 20 years of my life. The level of stress, the level of utter humiliation, clearly the enormous financial cost, the mental and physical toll this took on me personally, at one point in this experience I contemplated suicide. ‘