Volunteers are working to excavate hundreds of houses covered in toxic ash on La Palma, as the island was struck last night by the strongest earthquake since a volcanic eruption nearly a month ago.

Volunteers in face masks can be seen desperately using shovels to expose the buildings.

The surrounding hills are also covered in ash, with treetops peeking out from the mounds.

The camera pans to reveal that as far as the eye can see, the landscape is completely black from ashes.

Volunteers are excavating hundreds of houses buried in toxic ash on La Palma as the island was hit by the strongest earthquake since a volcanic eruption nearly a month ago last night. 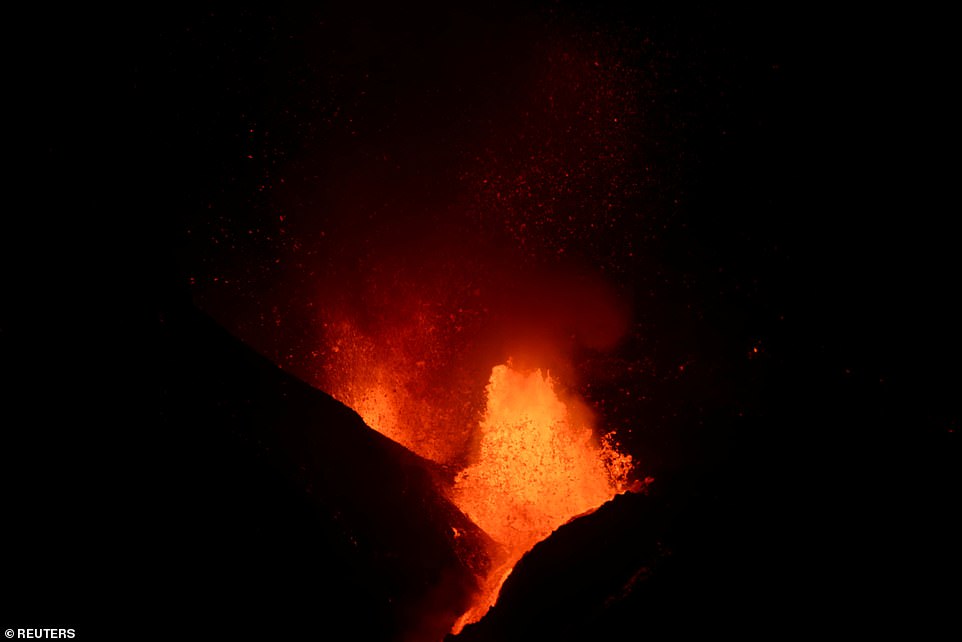 The video appeared as the island was rocked by a magnitude 4.5 earthquake — the strongest since the Cumbre Vieja volcano began erupting on Sept. 19. Pictured: A Thursday morning eruption 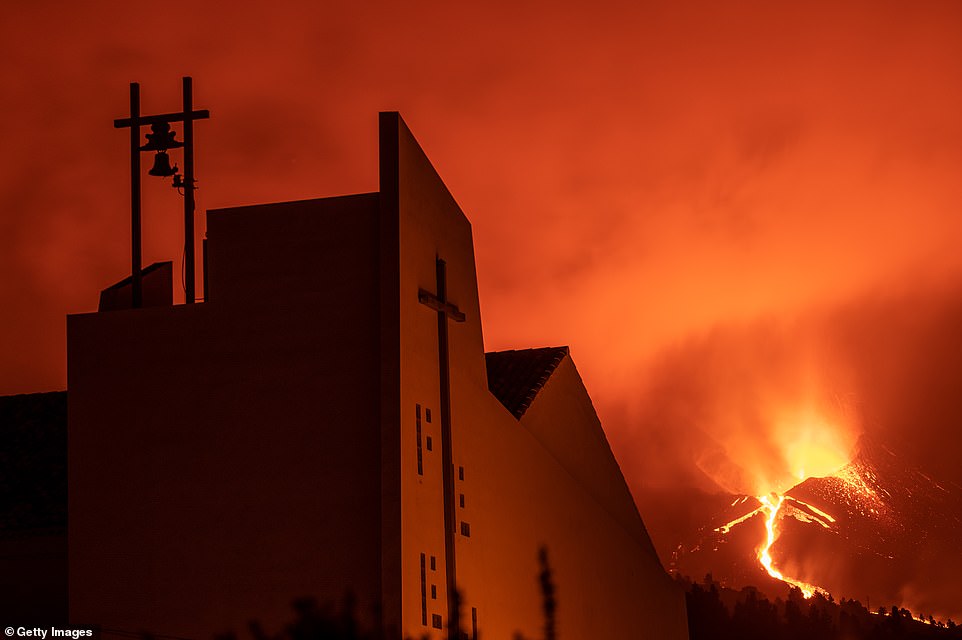 “If anyone wants to know how much ash is left around the volcano La Palma, watch this video,” Hernandez said.

Blocks of red lava, some the size of three-story buildings, rolled down the slope when the La Palma volcano collapsed on Sunday.

Volcanic ash has jagged edges that can irritate the eyes, nose and lungs, making it difficult to breathe.

Clearing the roads is an important task for the volunteers, as the thick layer of ash prevents the vehicles from moving.

One viewer Dave said: ‘Oh my Lord, that’s an infinite amount of work, snow is melting but this…’

Another said: “I haven’t seen a catastrophe like this for at least ten years since the 2011 tsunami in Japan, I hope the island can recover from this.”

The video appeared as the island was rocked by a 4.5 magnitude earthquake — the strongest since the Cumbre Vieja volcano began erupting on Sept. 19.

Scientists recorded more than 60 earthquakes on Wednesday night, the largest of which was felt across the island. 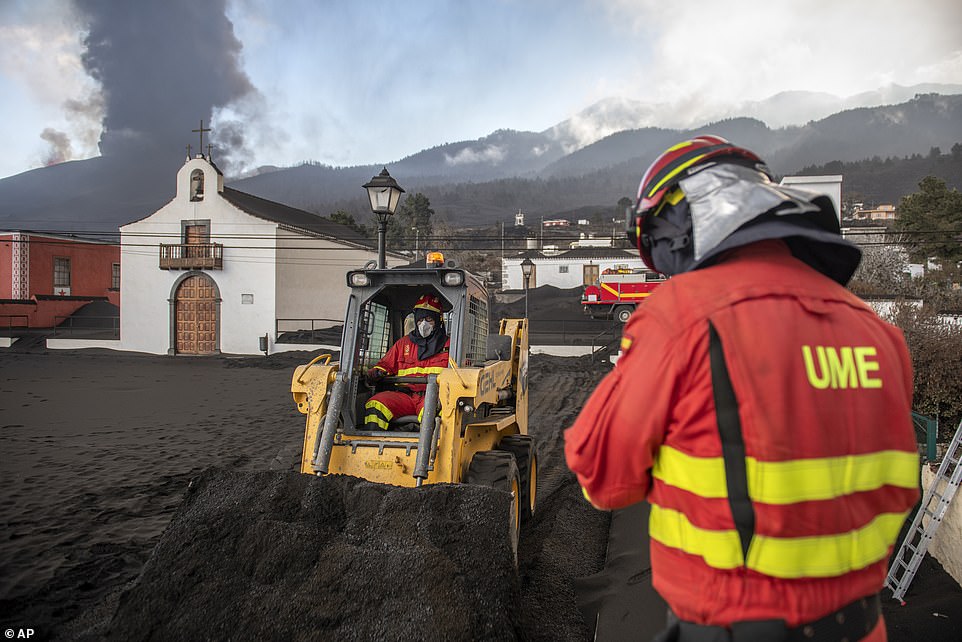 Military emergency unit personnel are also helping to clear the ash from the volcano, which is currently covering the island’s streets 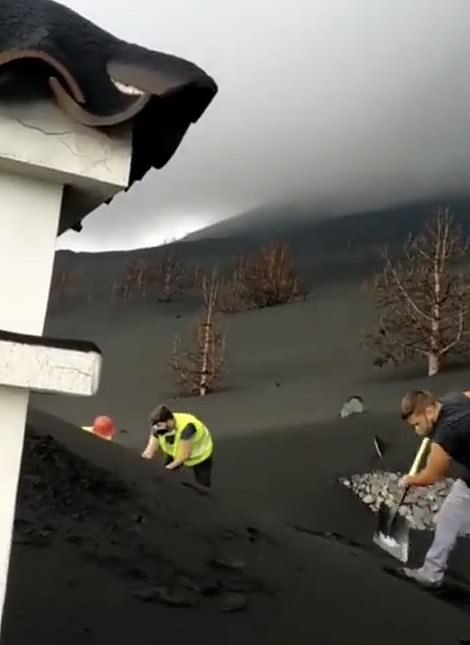 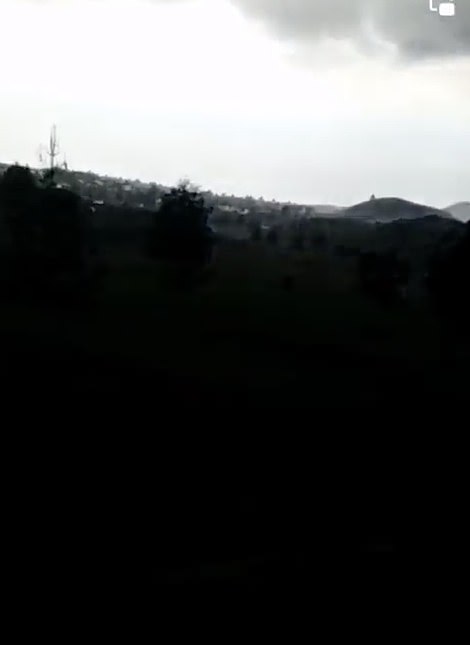 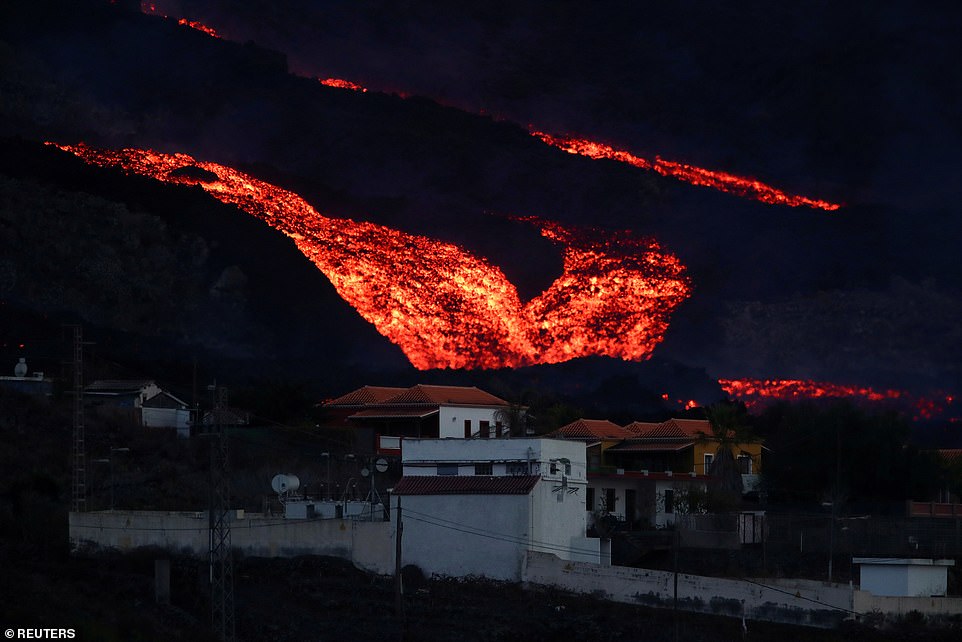 Three lava tongues are now emerging from the volcano, one of which is moving at a speed of 50 meters per hour. Pictured: Lava pours out of the volcano on Wednesday evening 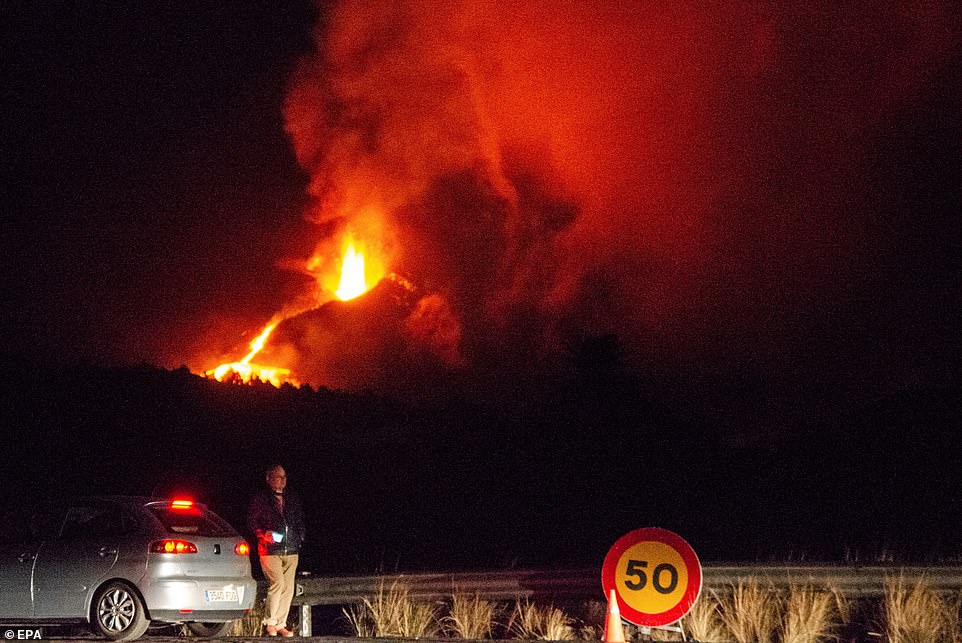 The National Geographic Institute’s 24-hour volcanic surveillance network has recorded a total of 55 earthquakes since midnight around the eruption of Cumbre Vieja volcano, eight of which were magnitudes greater than three.

The earthquake measuring 4.5 on the Richter scale hit the municipality of Villa de Mazo, in the southwest of the island at 2:27 am.

“I was in bed watching TV and I felt the bed move. It was like someone was walking on the roof, the windows were shaking and it woke my dog ​​up,” one island resident recalls.

Scientists say volcanic activity is unlikely to end “in the short or medium term.”

“The volcano is emitting a 3,000-meter plume of gases with large amounts of sulfur dioxide, 17,774 tons a day, and that size would have to drop to 100 to think the eruption is coming to an end,” a spokeswoman for the Canary Islands said. Volcanic emergency plan, said María José Blanco.

Three lava tongues are now emerging from the volcano, one of which is moving at a speed of 50 meters per hour.

Last night, the Special Plan for Volcanic Emergencies of the Canary Islands (PEVOLCA) ordered the evacuation of new districts in the municipality of Los Llanos de Aridane.

The air quality is described as good and an easterly wind is expected, allowing the axis to move west towards the sea. At the moment all Canary airports are fully operational. 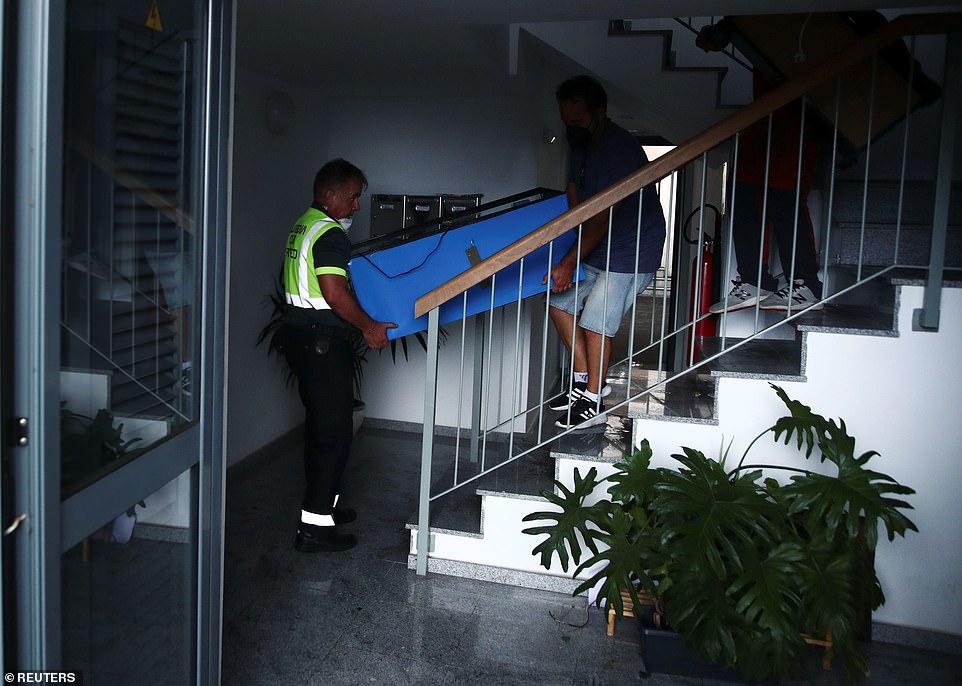 The eruption has evacuated 6,400 people. Pictured: An officer of the Spanish Guardia Civil helps residents get their belongings from their homes on Tuesday 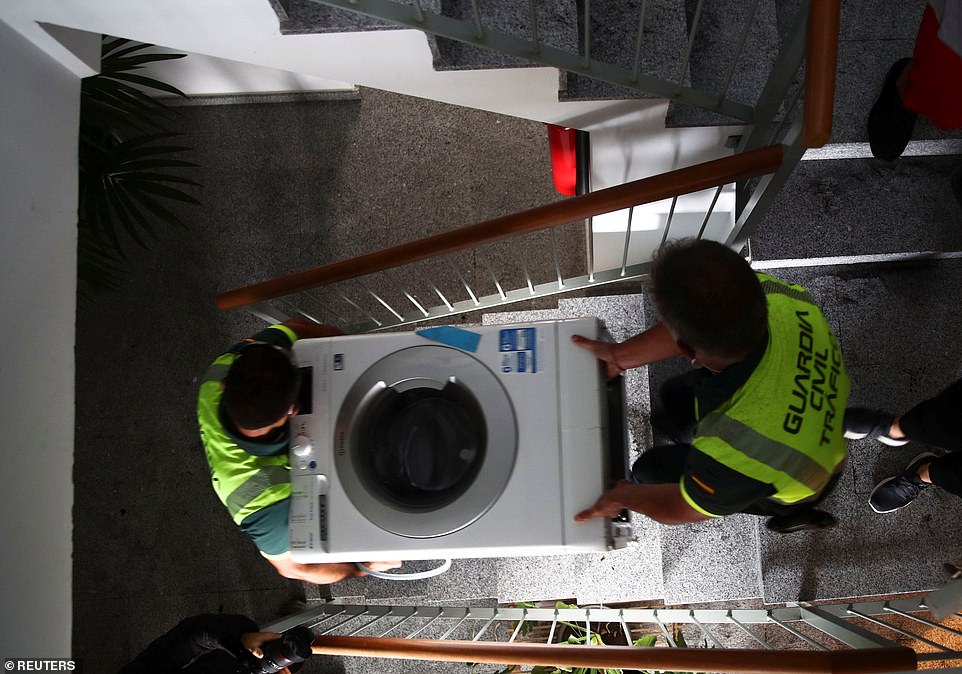 Some residents and tourists have been evacuated to the nearby island of Tenerife to escape the lava flow. In the photo: Civil Guard officers carry a washing machine from the house of an evacuating resident 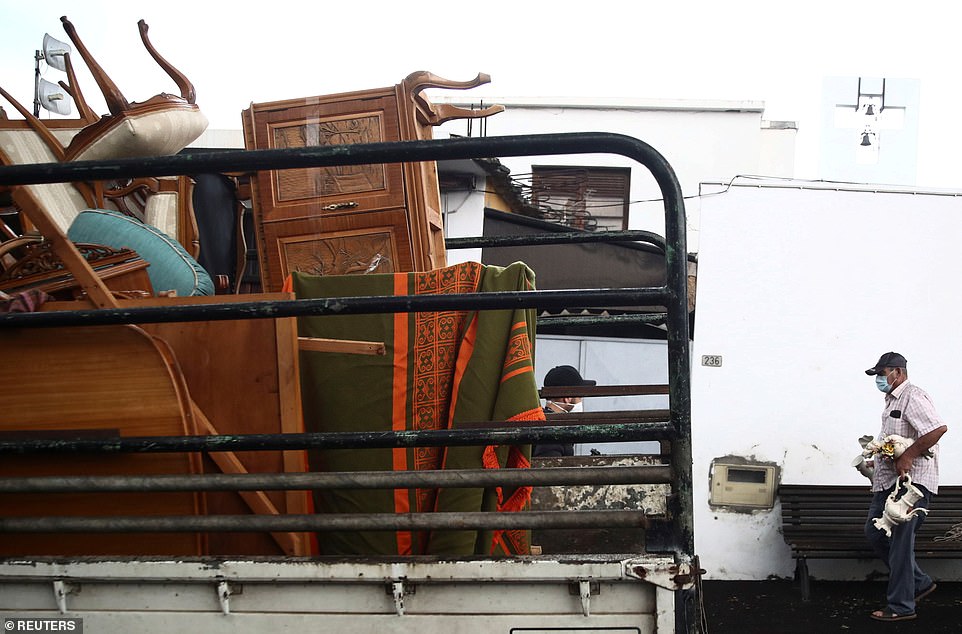 Pictured: Items belonging to Enrique Gonzalez and his family piled on the back of a truck as they prepare to leave their home in La Laguna, La Palma on Tuesday

So far, 680 hectares have been affected by the lava and 1,500 properties have been destroyed. Nearly 100 homes were devoured in the past 24 hours.

The lava also destroyed about 90 hectares of banana trees in the coastal area of ​​the Aridane Valley.

The eruption has evacuated 6,400 people, 5,700 of them in the first phase of the eruption and another 700 on Tuesday.

About 6,000 residents and 400 tourists among the evacuees were transferred to Tenerife. Of these, 280 people are housed in the Princess hotel in Fuencaliente.

Weather forecasts suggest the airport’s operations will not be affected for the next three days, as a Saharan wind will blow off the continent and divert the ash to the west.

However, dry air and a likely reversal could cause poor air quality tomorrow and the day after. 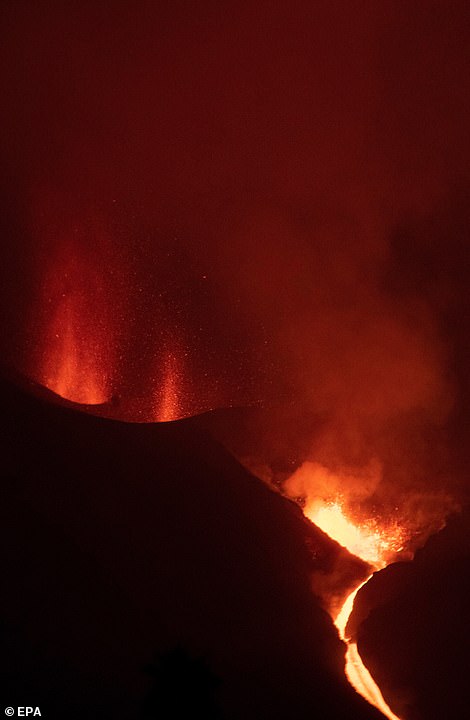 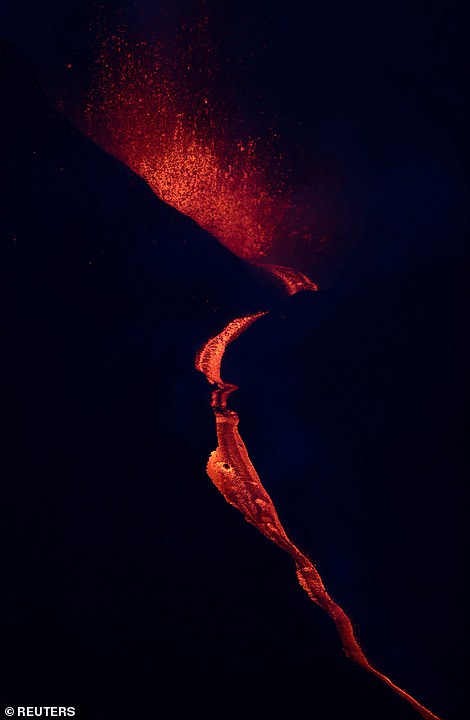 So far, 680 hectares have been affected by the lava and 1,500 properties have been destroyed. Nearly 100 houses were devoured in the past 24 hours 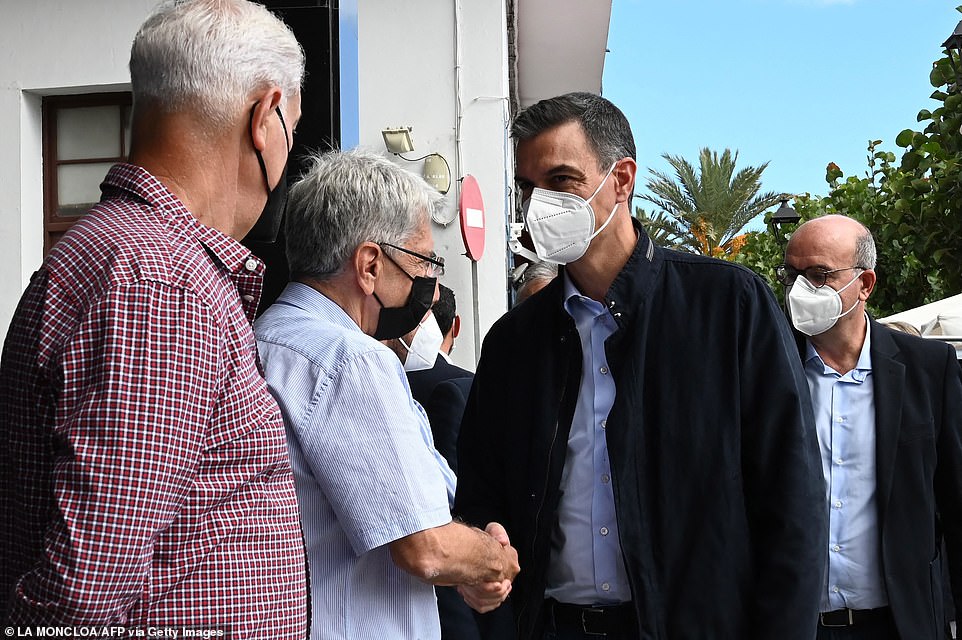 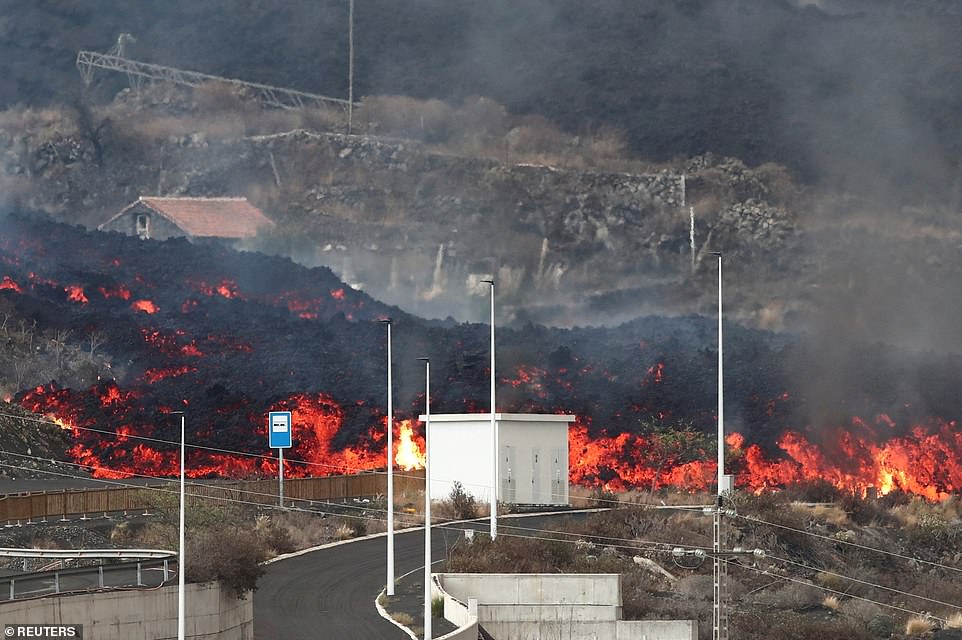 Lava rolls onto a road in Los Llanos, La Palma on Wednesday, burning bushes in its path

Student arrested for ‘planning mass shootings’ at her…