WHY Dan Andrews had to shut down Victoria’s construction industry – leaving 300,000 furious crafts out of work

By Eliza Mcphee For Daily Mail Australia and Monkey

Victorian Prime Minister Daniel Andrews has controversially shut down the state’s construction sector after 403 Covid-19 cases linked to the sector.

There are now 300,000 craftsmen out of work for two weeks after the shutdown, with hundreds taking to the streets in Melbourne Monday and Tuesday to protest outside the offices of construction union CFMEU.

The state’s health minister has revealed that the hundreds of cases found within the industry are related to 186 construction sites.

Before workers can return to the tools on October 5, they must prove they have had at least one Covid vaccination — a measure that has sparked outrage among many.

Numerous protesters who donned high-visibility vests and jackets on Tuesday were told to back off by police. 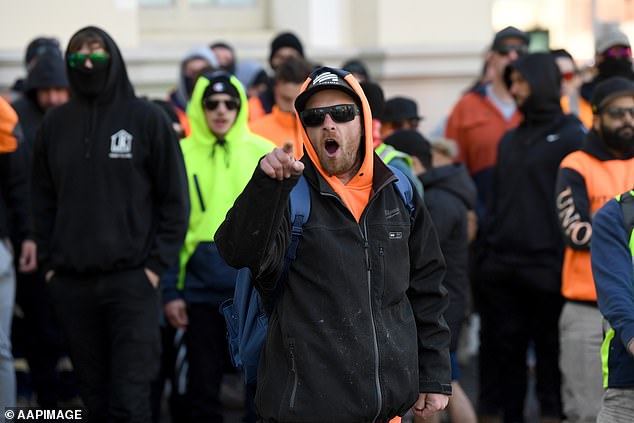 “Note, this is a public order warning from the police. You have been ordered to leave before,” an officer in a row of riot police and mounted officers told the crowd.

“Go away now or there will be violence. There are no more warnings.’

The group of protesters at the intersection of Elizabeth and Victoria Street in Melbourne’s CBD responded Tuesday with “every day” chants.

They oppose a Victorian government mandate requiring all construction workers to be vaccinated against Covid-19.

The group, dressed in hi-vis, chants ‘f*** the jab’, ‘f*** off (Premier) Dan Andrews’ and other expletives, but is blocked from entering CFMEU headquarters by a line from Victoria Police officers.

On Monday, riot police were called in to disperse a group of about 500 protesters, who threw bottles at Victorian CFMEU construction secretary John Setka and smashed the door of the office.

Setka said on Tuesday that the protesters were not all CFMEU members and blamed “neo-Nazis and right-wing extremists” for hijacking the event.

“There was a small minority of construction workers, some just walked out when things got violent. It was hijacked by the professional protesters,” Victorian construction secretary John Setka told ABC Radio National on Tuesday morning.

He said the CFMEU was “pro-vax” but had always supported freedom of choice regarding vaccination.