The number of COVID-19 cases among children in the US continues to fall after reaching record highs.

More than 225,000 American children and teens tested positive for the virus last week, according to a new report from the American Academy of Pediatrics (AAP).

The figure represents a seven percent drop from the approximately 243,000 under-18s who contracted Covid the week before.

This brings the total of pediatric coronavirus cases to more than 5.5 million since the start of the pandemic.

Children also accounted for 25.7 percent of all US cases recorded last week, having made up for 28.7 percent of infections the week before.

However, most pediatric cases are not serious and virus-related childhood deaths are rare, with pediatric deaths accounting for just 0.1 percent of all COVID-19 deaths.

Because of children’s low risk of serious illness and death, parents and doctors are split 50/50 on whether or not to vaccinate children. 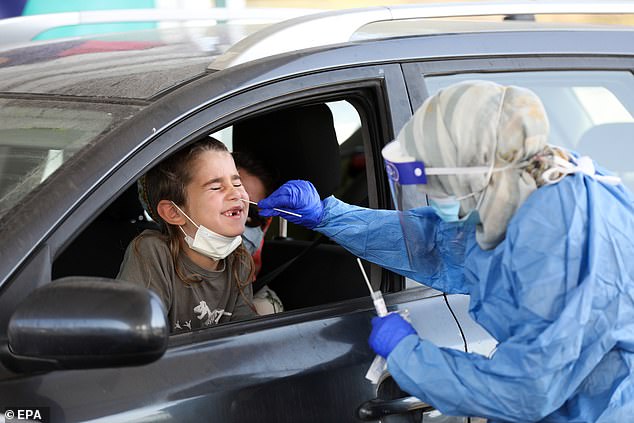 Under 18s were 25.7% of all U.S. cases recorded last week, totaling 5.5 million since the start of the pandemic. Pictured: Medical staff take a sample from an Israeli child at a coronavirus testing and driving complex in Jerusalem, September 2021

According to the AAP report, 225,978 cases of COVID-19 in children were reported between September 9 and 16.

Vermont has the most with more than 22 percent of all cases of the state among the youngest residents. 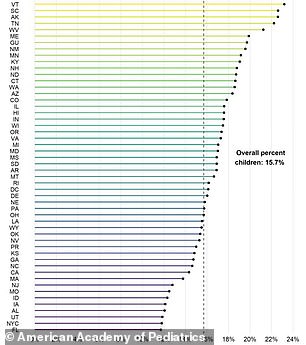 Children are responsible for at least 18% of all COVID-19 cases recorded in 14 states, with Vermont leading at 22%

When it comes to regions across the country, the South has the most childhood cases reported with about 110,000.

Meanwhile, the Northeast had the least number of cases with fewer than 20,000 weekly cases.

Children never accounted for more than 0.25 percent of deaths in any state, and seven states reported zero infant deaths.

A total of 480 children have died from COVID-19 since the start of the pandemic, about 190 of them after the Delta variant began to spread rapidly.

“Right now, it appears that severe illness due to COVID-19 is uncommon among children,” the authors wrote.

“However, there is an urgent need to collect more data on the long-term effects of the pandemic on children, including ways in which the virus may harm the long-term physical health of infected children, as well as its emotional and mental health effects.”

American parents are split 50/50 on whether or not to vaccinate their children.

The South has the most weekly Covid cases for children with about 110,000 reported (green), while the Northeast had the least with about 10,000 (blue)

Some doctors have also suggested that children should not be vaccinated because of their low risk of serious illness and death.

In an April 2021 poll conducted by the Kaiser Family Foundation, parents were asked whether they would have their child vaccinated once a COVID-19 vaccine is approved and available for their child’s age group.

However, 40 percent of parents also said it was “unlikely” that their children would be vaccinated.