A bird flu prevention area has been declared across the country after a number of cases of the virus were discovered in captive and wild birds in England, Wales and Scotland.

Farms and bird keepers have been ordered to tighten their biosecurity measures after bird flu (H5N1) was observed in poultry at multiple sites across the UK.

The Avian Influenza Prevention Zone (AIPZ), which was enforced from: 5:00 pm today, keepers will see with more than 500 birds must restrict access for non-essential humans to their sites.

Workers will need to change clothes and footwear before entering the bird enclosures, and on-site vehicles should also be cleaned and disinfected regularly to stop the spread of the disease.

UK health authorities have said the risk to public health from the virus is ‘very low’ and that bird flu also poses a ‘very low food safety risk to UK consumers’.

It comes as a flock of poultry that tested positive for avian influenza was culled today in Angus, Scotland. 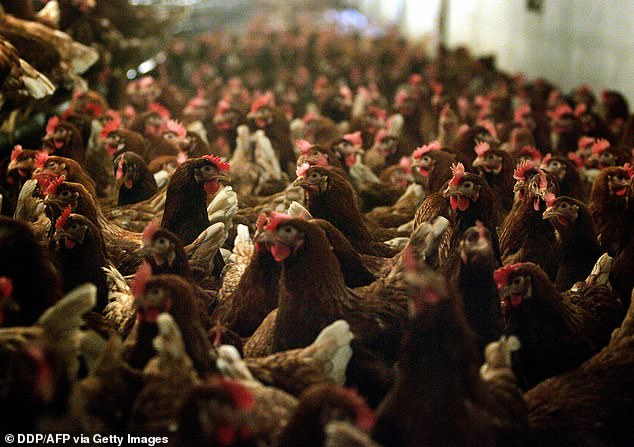 In the Avian Influenza Prevention Zone (AIPZ), keepers with more than 500 birds will be required to restrict access for non-essential people to their sites. (Stock Image)

Avian flu naturally circulates in wild birds and when they migrate from mainland Europe to the UK in winter they can spread the disease to poultry and other captive birds.

UK health authorities have said the the risk to public health from the virus is very low and the UK food standards bodies advise that avian influenza poses a very low food safety risk to UK consumers.

In a joint statement, the Chief Veterinary Officers for England, Scotland and Wales said: “Following a number of avian influenza detections in wild birds across Britain, we have declared an Avian Flu Prevention Zone across Britain.

“This means that all bird keepers must take action now to prevent the disease from spreading to poultry and other domestic birds.”

Whether you keep a few birds or thousands, you are now legally required to introduce higher biosecurity standards on your farm or small business. It is in your interest to do this to protect your birds from this highly contagious disease

‘The UK health authorities have confirmed that the risk to public health is very low and UK food standards bodies are advising that avian flu poses a very low food safety risk to UK consumers.’

Earlier today, the Scottish government confirmed that a flock of poultry that tested positive for avian influenza (H5N1) had been culled.

A Scottish Government spokesman said: ‘Appropriate restrictions have been placed on the property to limit the further spread of disease. 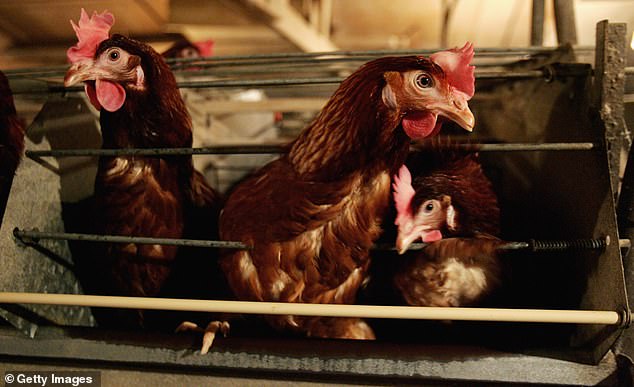 Today, the Scottish government confirmed that a flock of poultry that tested positive for avian influenza (H5N1) had been culled in Angus. (Stock Image)

“The remaining birds on the site will be humanely culled and temporary control zones of three and ten kilometers have been established around the infected farm to limit the risk of the disease.

‘All kinds of different controls are now available within these zones. These include restrictions on the transportation of poultry, carcasses, eggs, used poultry litter and manure.’

Rural Affairs Minister Mairi Gougeon said: ‘With the recent confirmations of disease in wild and captive birds in the UK, it is not unexpected that bird flu is found here in birds.

“Temporary control zones have been established around the contaminated buildings and we ask the public to remain vigilant and report any findings of dead wild birds.”

Sheila Voas, Scotland’s Chief Veterinary Officer, added: ‘We are conducting further tests to determine the pathogenicity of avian influenza H5N1 in a flock of birds in the Angus constituency.

‘We have already made it clear that all bird keepers – whether large companies or small keepers with only a few birds – must ensure that their biosecurity is in order to protect their birds from disease.

“Holders concerned about the health or welfare of their flock should seek veterinary advice immediately.

Private veterinarians, or the local office of the Animal and Plant Health Agency, can also provide practical advice on how to protect birds from infection.

‘If one dead wild water bird (swans, geese or ducks), one dead bird of prey, or five or more dead wild birds of another species (including gulls) are found at the same time in the same place, it must be reported to the Defra National Helpline .

“Don’t touch or pick up dead or visibly sick birds.”

Dolphin herd leaps out of turquoise sea off Cornwall in stunning…

Raphael Varane ‘could be another MONTH’ with hamstring injury

Colorado hospitals are nearly full as the state struggles with a growing caseload.