After the collision on Victoria Street in Wetherill Park on Thursday at 6:30 am, huge plumes of smoke were seen in the air.

Both drivers suffered minor injuries and were treated at the scene by paramedics while the fire service was busy extinguishing the fire. 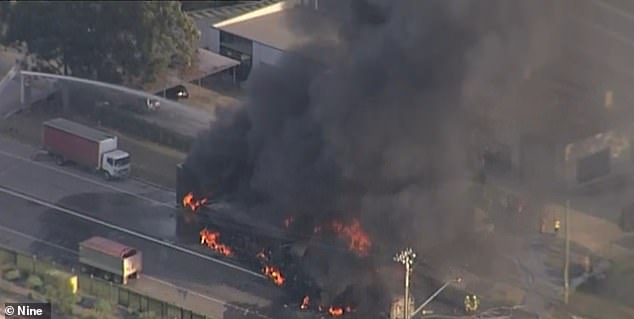 After the collision on Victoria Street in Wetherill Park on Thursday at 6:30 am, huge plumes of smoke were seen in the air.

While NSW agents confirmed to Daily Mail Australia that two lorries were involved in the collision, firefighters at the scene suggest a third vehicle is involved.

Fire and Rescue NSW has deployed more than 60 firefighters to the crash, while motorists have been urged to avoid the area.

The nearby Cowpasture Road and Victoria Road have been closed and local traffic diversions have been put in place.

Fairfield City Police Area Command officers remain on the scene and are investigating the circumstances of the incident.