Critics have criticized Twitter after the fact-checkers added a ‘misleading’ warning to an obituary about a young woman who reportedly died after contracting a rare blood-clotting disease caused by the COVID-19 vaccine.

Twitter user Kelly Bee shared the obituary for Jessica Berg Wilson, of Seattle, captioning “an exceptionally healthy and vibrant 37-year-old young mother with no underlying health conditions,” who died of COVID vaccine-induced thrombotic thrombocytopenia. She didn’t want to be vaccinated.’

Twitter flagged the tweet as “misleading” with a link to an article on “why health officials consider COVID-19 vaccines safe for most people.” The tweet was also “shadow banned,” meaning it can’t be commented on, shared, or liked.

Wilson, a 37-year-old mother of two, died on September 7 of Vaccine-Induced Thrombotic Thrombocytopenia, a rare blood disease in which small clots form throughout the body that destroy platelets and prevent the blood from reaching vital organs. to the obituary. 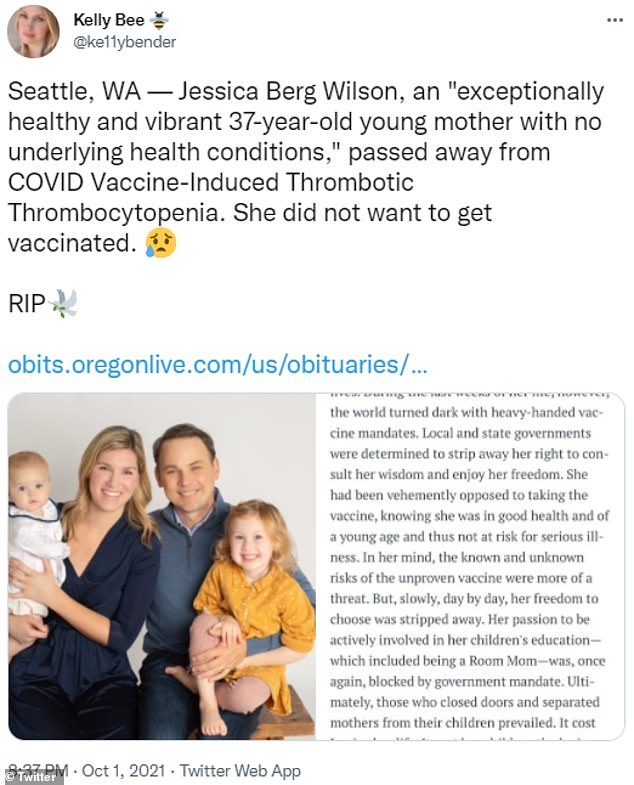 Most critics were disgusted that Twitter “censored” an obituary and responded by encouraging their followers to let it go viral, despite the company’s warning. Kelly Bee posted it Friday, and Twitter has since removed the “misleading” label and lifted the shadow ban. The tweet received 7,193 quote tweets, 4,167 retweets and 4,222 likes on Sunday evening.

After posting it Friday, Kelly Bee followed up with another tweet, writing: “Twitter has shadow banned this obituary because it’s ‘misleading’. It’s not. Please RT so this BS hits back at them.’

Republican Texas Rep. Chip Roy tweeted the obituary with the caption “For [on Twitter] we are not afraid to follow the truth wherever it leads unless, of course, it contradicts what Dr. Fauci or the enlightened government and tech overlords say you must do for your health care… #HealthcareFreedom.’

Sebastian Gorka, who worked at the Department of Defense under former President Donald Trump, tagged Twitter CEO Jack Dorsey in a post asking what’s misleading about the obituary. He wrote: ‘Hey @jack, Jessica was well and died. Why are you censoring that fact as “misleading?” ‘ 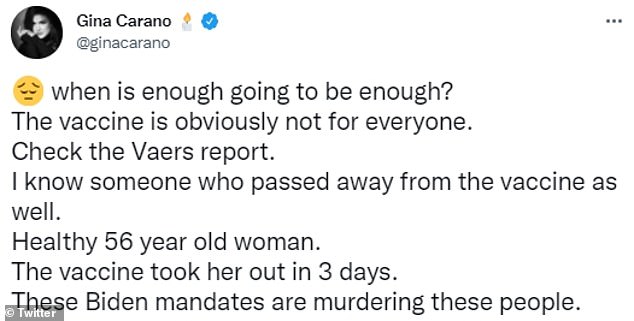 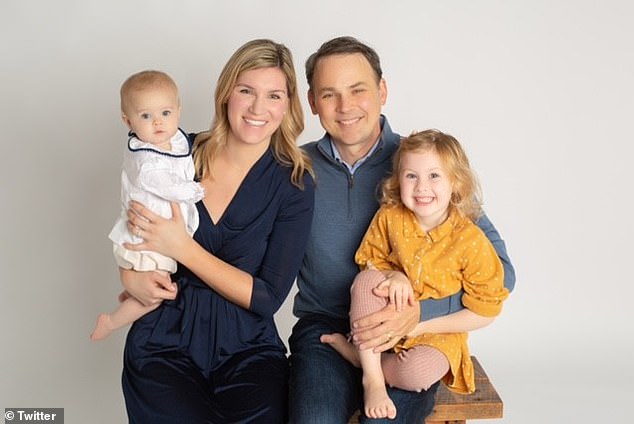 Twitter’s fact-checkers have added a “misleading” label to an obituary about a young woman who died after contracting an illness caused by the COVID-19 vaccine. The woman, Jessica Berg Wilson, is pictured above with her husband Tom and their daughters Clara (left), 3, and Bridget, 5

A number of conservative bloggers have also retweeted the obituary, including Ben Domenech, a writer for The Federalist, who wrote: “Who decided @Twitter it’s okay to say an obituary is ‘misleading’?”

Tyler Cardon, the CEO of Blaze Media, tweeted it with the caption: “There’s nothing inaccurate or misleading about this Tweet, but Twitter wants you to believe it is.”

Outspoken conservative actress Gina Carano shared the obituary, tweeting, “When is enough enough? Of course, the vaccine is not for everyone. Check the [Vaccine Adverse Event Recording System] report. I also know someone who died from the vaccine. Healthy 56 year old female. The vaccine took her out in 3 days. These Biden mandates are killing these people.”

Carano referred to the VAERS, a government website where users can share any side effects they experienced after being vaccinated.

Another Twitter user named Penny, whose biography reads simply “anti-Communist,” shared the tweet with the caption: “Marking Obits as misinformation is a new low, even for Twitter.” And Twitter user Brian, whose biography mentions that he is a law student, tweeted the obituary with the caption: “Social media censorship won’t let you retweet the original tweet. Let’s make this tweet go viral.”

Jessica Berg Wilson’s biggest goal in life, according to the obituary, was to “be the best mother possible” to her daughters Bridget (5) and Clara (3).

“Nothing would stand in the way of her being present in their lives,” it reads. During the last weeks of her life, however, the world went dark with heavy-handed vaccine mandates. Local and state governments were determined to strip her of the right to consult her wisdom and enjoy her freedom. She vehemently opposed taking the vaccine, knowing she was in good health and of a young age, so she was not at risk of serious illness. In her view, the known and unknown risks of the unproven vaccine were a greater threat.’

The obituary continues to scorn government vaccination mandates as leading to Berg Wilson’s death, stating: ‘But slowly, day by day, her freedom to choose was taken away. Her passion to be actively involved in her children’s education — including being Room Mom — was once again blocked by government mandate.

In the end, those who closed doors and separated mothers from their children won. It cost Jessica her life. It cost her children the loving embrace of their caring mother. And it cost her husband the sacred love of his devoted wife. It cost God’s Kingdom on earth a very special soul who made her love felt in the hearts of so many.’

In lieu of flowers, Berg Wilson’s family requested that those who mourned her be donated to the Sacred Heart Shelter for Families.

The obituary does not mention what vaccine Berg Wilson received, when she was diagnosed with VITT or whether she sought treatment for the disease before she succumbed to it.

The blood clot disease does not occur in patients receiving the Moderna or Pfizer vaccine, but has been reported in 0.9 million people who received the Johnson and Johnson injection and 3.6 million people who chose the Astra Zeneca vaccine, according to the American College of Cardiology.