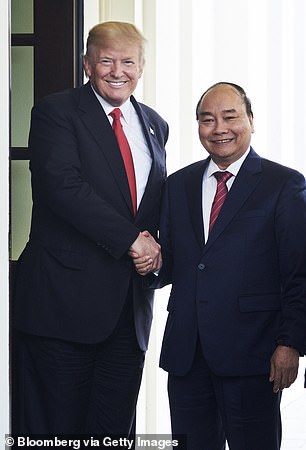 Former US Ambassador to Vietnam Ted Osius said ‘nothing could have prepared’ [him] for the strangeness” of the ex-president’s May 2017 White House meeting with Prime Minister Nguyen Xuân Phúc in part of his forthcoming book on US-Vietnam relations.

Osius only met Trump just before the meeting, he claimed in the excerpt released by Salon. He said he stepped into a crowded Oval Office where he “stared at a stiff helmet of orange hair.”

The diplomat said Trump told him he was “lucky” to have such a “good job.”

He agreed, adding, “I love my job and feel privileged to do it.”

Shortly before the planned state visit began, Trump asked him, “So, who are we going to meet?”

A senior national security official apparently foresaw trouble and tried to help the ex-president pronounce the name of the head of state.

“Nguyen Xuân Phúc,” they said, according to Osius. “Rhymes with book.”

“You mean like Fook You?” Trump reportedly replied before following the racist comment with an unsolicited tangent.

“I knew a man named Fook You. Actually. I rented a restaurant for him. When he picked up the phone, he replied “Fook You.” His business ended badly. People didn’t like that. He’s lost the restaurant,” he said. 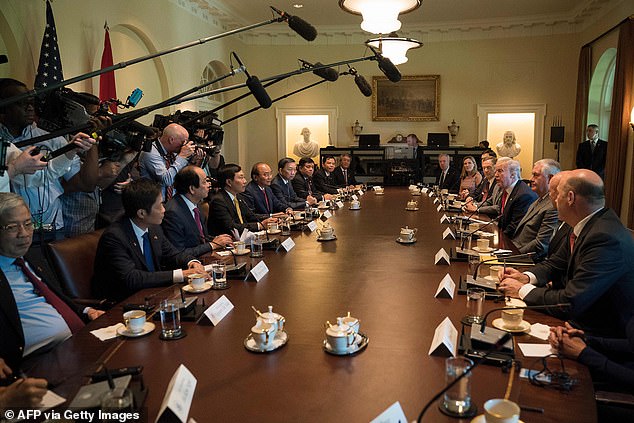 DailyMail.com has reached out to a spokeswoman for Trump and the Trump Organization for comment.

The former president was known for making racist statements even before taking office. When Barack Obama was in the White House, he insisted on the “birther” theory that the Democrat wasn’t really born in the United States.

Grisham claimed at a G20 summit in 2019 that he asked Turkish President Recep Tayyip Erdoğan if he had seen the film Midnight Express, adding that “that’s a dark film for you” to the Turkish leader and his aides.

The 1978 film is about an American who is imprisoned in Turkey after trying to smuggle hash out. It has been criticized for its violent portrayal of Turks. 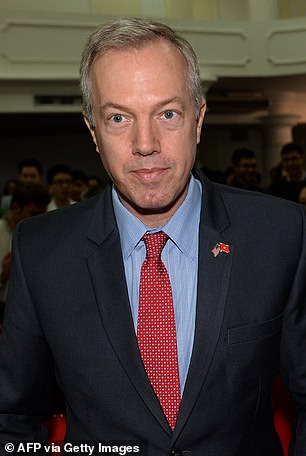 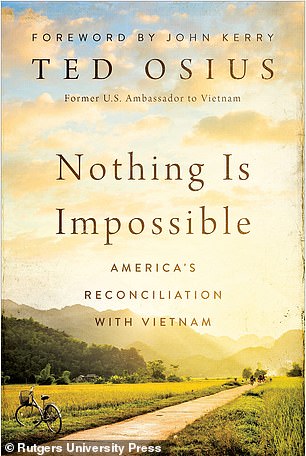 Ted Osius recounted Trump’s May 2017 meeting with the Vietnamese Prime Minister in his forthcoming book, Nothing Is Impossible: America’s Reconciliation With Vietnam.

Osius is an accomplished diplomat with decades of experience in embassies in Asia. He has also worked under Bill Clinton, George W. Bush, and Barack Obama, but was Trump’s ambassador only until November 2017.

He resigned in protest at the Trump administration’s proposal to expel Vietnamese refugees who had lived in the US for decades.

In his memoir, Nothing is Impossible: America’s Reconciliation with Vietnam, Osius describes firsthand how the US built relations with Vietnam after the years-long fallout of the Vietnam War.

In Tuesday’s excerpt, Osius outlined several incidents during the Vietnamese Prime Minister’s trip that made him stand out against his nearly 25-year career.

The day before the presidential meeting, Osius accompanied Phúc to a “disturbing” meeting with Secretary of Commerce Wilbur Ross.

The eighty-one-year-old secretary seemed lost, unable to find his place in his briefing notes or determine which trade challenges to highlight. His translator was also unhappy and we had to rely on the Prime Minister’s,” Osius wrote. 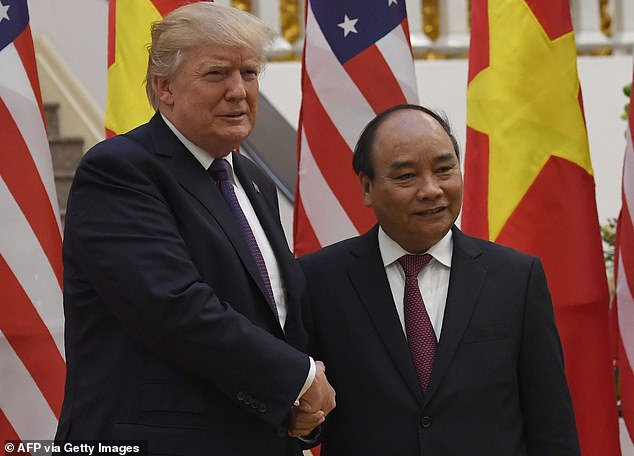 Trump would forget or not know that he had a planned visit to Vietnam in November 2017, just six months before it was due (Photo: Trump at the 2017 rally)

His subsequent meetings with Secretary of Agriculture Sonny Perdue and U.S. Trade Representative Robert Lighthizer were much more productive, the diplomat claimed.

While scheduling the meeting with Phúc in the Oval Office, Trump instructed Lighthizer to “cut the US trade deficit with Vietnam to zero in four years.”

Osius noted it was an “impossible task” and said Lighthizer was trying to shift focus to asking Trump about a new embassy for Hanoi and a possible groundbreaking ceremony during the president’s trip to Vietnam.

But Trump was taken by surprise and asked, ‘I’m coming to visit?’

He went on a planned trip to Vietnam in November 2017, but no groundbreaking ceremony took place. During the November visit, the White House instead praised an “agreement” to secure land for a new compound.

In his book, Osius seems to argue that Trump’s son-in-law, Jared Kushner, had a part in the delay.

After Trump “disappeared into another room” when he learned of his planned trip, Osius claimed Kushner asked how much the embassy would cost. 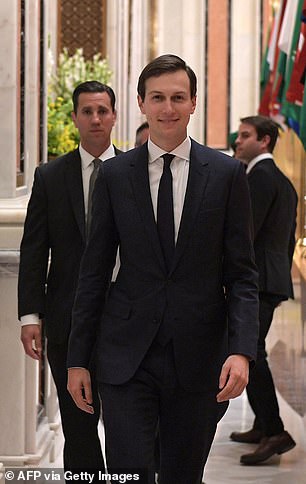 Osius told him it would probably cost “half as much” as the newly built $1 billion embassy in Beijing.

But Kushner was not satisfied, and Osius commented that he “seemed surprised.”

‘That’s a lot. Why do we spend so much? If we’re going to give them that, we should get something in return,” Kushner is said to have replied.

Osius commented, “I wondered if he understood that we were trying to build a new embassy for the United States and not for Vietnam.”

He warned Trump’s family member who became an adviser that the existing embassy — where Osius operates when he’s in Vietnam — was meant to be temporary and lacked the necessary security features.

‘It is not safe. A truck bomb could drive right up to it and blow us up in the blink of an eye. Like in Benghazi,” he advised, recalling the devastating attack that left a black mark on the legacy of Obama and then Secretary of State Hillary Clinton and killed four Americans, including the US ambassador to Libya.

But he said Kushner shook off the potentially life-threatening need for repairs and repeated his father-in-law’s impossible task.

“We need something in return. Tell them we’ll build it if they cut our trade deficit to zero,” the adviser replied.

Osius wrote: “I repeated my argument about security for American citizens, but Kushner’s dark eyes had gone elsewhere. He stopped listening.’ 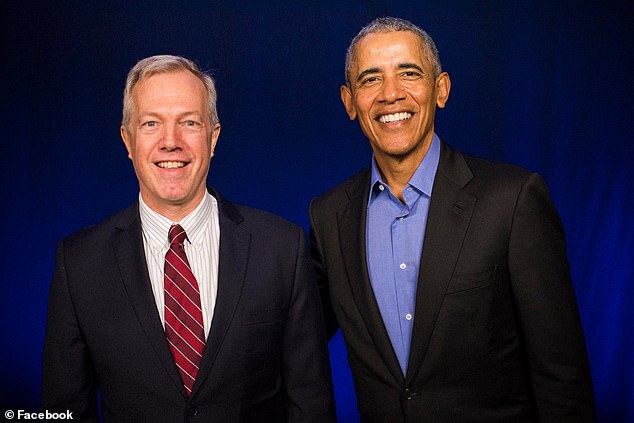 Barack Obama nominated him to serve as U.S. Ambassador to Vietnam, a position he held under Trump until November 2017. Another example of Trump’s racism was when he fueled “birther” conspiracy theories that the Democratic president was born outside the US

Another aide Trump influenced during the meeting, the career official claimed, was senior adviser Stephen Miller.

During the Trump administration, Miller is said to be behind some of the White House’s more controversial policies, often accused of racist charges, such as the Remain In Mexico policy for asylum seekers.

The diplomat said Miller was behind Trump and demanded that the leader of the Vietnamese communist government publicly “praise the virtues of free and fair trade.”

His other demands for Phúc, in addition to cutting the trade deficit to nothing in four years, include urging the country to step up pressure on North Korea.

Trump pointed out to the prime minister that “Saudi Arabia had placed orders worth $450 billion during the president’s recent visit there.”

Trump said to him: ‘Jared’ [Kushner] and Rex [Tillerson] worked very hard’, according to Osius’ account.

He urged Phúc to “make more progress” with his requests before coming to Vietnam in November.

The diplomat wrote: “The message was clear: Presidential visits came with a price.”