Unhappy meal: Bizarre moment when two men argue outside a McDonald’s for rush hour traffic – but it’s the cop walking behind them who has everyone talking

A brawl has broken out outside a busy McDonald’s, but it didn’t seem to deter a police officer who casually strolled after the fighters.

Footage uploaded to TikTok on Wednesday shows a man on the run from a McDonald’s in Otahuhu, Auckland, New Zealand, while two others give chase.

The man is filmed fleeing on foot before another man, dressed in a red shirt, tries to grab him to the ground.

The third person falls into a signpost near the busy intersection before the man in red is knocked to the ground by the swift attacker.

But it’s the cop casually sauntering behind the background brawl that has captured attention online.

“The cop taking a Sunday walk,” joked one TikTok user.

“The cop doesn’t seem to like running away,” another commented. 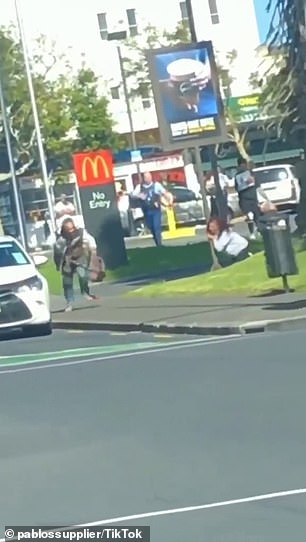 Others suggested that one of the men would be better suited to the rugby field, with one user writing: ‘Someone needs to sign him for the Warriors team’.

“Give him a shot at the Warriors, at least he can defend,” another advised.

Economic and earnings problems start to weigh on equities