The prospect would terrify most people: plunge into a series of pitch-black caverns dotted with narrow creepers, underground rivers, vertical shafts up to 150 feet deep, and countless “wells”—long and deep underwater tunnels so obscure that, even if you a powerful light, you could not see a hand in front of your face.

But Chris Jewell and Jason Mallinson were about to do just that in a record-breaking attempt to complete the longest possible journey into underground Britain.

We stood at the easternmost entrance to the longest caving route in the country through the 84 miles of the Three Counties System, which winds its way through North Yorkshire, Lancashire and Cumbria.

High on the slopes of Gragareth, a heather-clad trap fell into the Yorkshire Dales, the vertical opening takes you to a cave known as Large Pot. 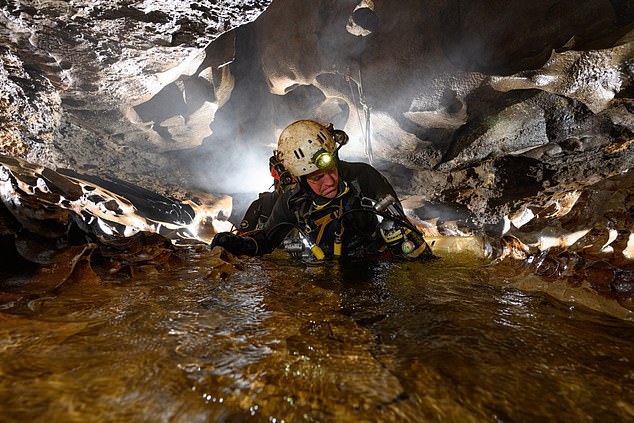 Down there is the Holy Grail of British caving. This extraordinary attempt to conquer it was the culmination of nearly 100 years of exploration, during which new caves were discovered and routes joined together – often by diggers who spent years clearing blocked passageways – to take the adventurous on the country’s greatest underground journey. to offer.

While completing it, the speleologists had to swim more than a mile underwater, through seven separate wells; they had to bend their bodies around the tightest curves, sometimes creeping forward in desperately confined spaces on a journey of seven miles and more.

The skill and stamina required for nearly 20 hours have been considered more than even the best in the industry to date.

It’s no wonder Jewell admitted to being “a little apprehensive”, adding: “If we get this done, it’s going to be a once-in-a-lifetime trip.”

He smiled . . . then suddenly disappeared along the rope, swallowed by the earth. Jewell, 39, an IT consultant from Cheddar in Somerset, and Mallinson, 53, a rope access technician who lives in Huddersfield, are both experienced cave divers.

The pair suddenly became world famous three years ago when they played a crucial role in the rescue of the 12 boys and their football coach from the flooded Tham Luang cave in Thailand.

On three consecutive days, both men dove through a mile of underwater tunnels to the room where the boys were trapped.

The 13 were performed one at a time, a heroic feat that is the subject of two feature films: The Rescue, a documentary by Oscar winners Elizabeth Chai Vasarhelyi and Jimmy Chin, due out next month; and Thirteen Lives, a drama version from Apollo 13 director Ron Howard, set to premiere next year. 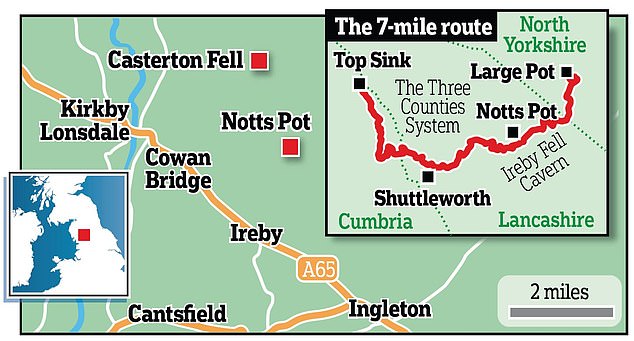 The Thai rescue had the highest possible stakes. But the sheer difficulty of what the two men attempted last weekend — starting on Saturday — was much greater.

“As for the caving, it’s more difficult,” Mallinson said. “The dives are longer and deeper, and the water is much colder. And there is a lot of tiring, dry passage.

“On the other hand, it does make a difference that you don’t have the responsibility to try to swim while carrying a child under anesthesia.”

Until last weekend, no one had seriously thought of doing it all at once. It was too scary.

When Mallinson and Jewell entered Large Pot, they weren’t just dealing with that seven miles of caving, over a mile of which was underwater. But also the seven wells, the longest of which had never been dived from start to finish.

The record attempt required a huge logistical effort to transport diving equipment to various locations and store it together with food, rigging the vertical sections with rope and then, starting Sunday, pulling the equipment out again.

On Saturday, about 50 cavers were involved in supporting roles – including me. Kevin Gannon, 62 and secretary of the northern part of the Cave Diving Group, came up with the master plan. Another 20 played their part in the preceding weeks.

At the team briefing in a parking lot in the village of Ingleton in North Yorkshire, he previously compared it to an ‘underground K2’, a reference to the pyramid-shaped mountain in the Himalayas that is considered the ultimate challenge for the world’s best mountaineers.

“But after the months of lockdowns,” he added, “what a great way to bring British cavers together and put us back on the world map – as long as nothing goes wrong.”

Some of the hardest dry caving is early, through the narrow twists and turns between Large Pot and Ireby Fell Cavern.

Before taking the plunge, Mallinson and Jewell had to visit them to make sure their bodies were small enough to get through.

Photographer Bartek Biela, his wife Paulina and I planned to meet the couple three times, the first time coming from a well at the end of a cave called Notts Pot 2.

We descended the vertical entrance shaft into a long stretch of underground river, more than half a mile long, with a vaulted tunnel and a gleaming crystal roof.

At the upstream end we stood by a pool where the roof plunged below the surface of the water – a sump.

After a few minutes, the thin nylon line laid through it — the vital thread cave divers grab to navigate when the water is too cloudy to see — began to vibrate. Someone would come.

First Jewell, then Mallinson, broke through. They changed their neoprene diving gear to a dry caving kit (one-piece fleece undersuits and waterproof PVC overalls) brought in by the support team.

We were hundreds of feet underground – and I did my first underground interview for the Mail. Then they were gone again. 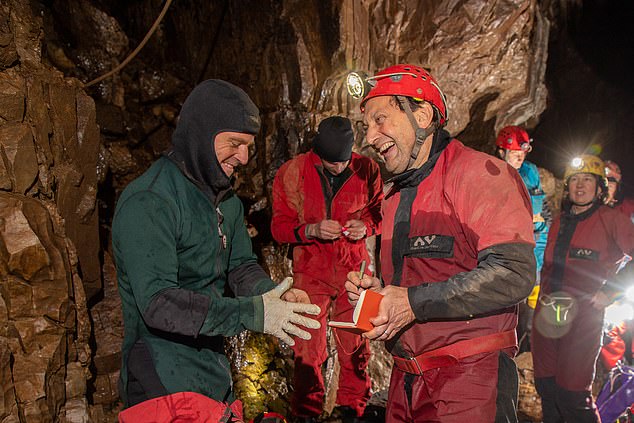 Bartek, Paulina and I went out and plodded up the hill to the next place we wanted to meet, Shuttleworth Pot, where we rappelled into a huge, echoing cavern with a river and a rumbling waterfall.

For Mallinson and Jewell, this would provide just a short breather between their two longest dives.

The first – a 900m dive from Lost John’s Cave – had never been attempted as a ‘through dive’ before.

It was Mallinson who first connected the Shuttleworth line to a line previously laid by divers from Lost John’s, but he hadn’t gone all the way from start to finish.

We waited. And we waited. We were damp and the chilly air of the cave was beginning to penetrate. After almost two hours, our fear grew. But finally the line vibrated and there they were.

For the longer dives, Mallinson and Jewell used “rebreathers” – high-tech units that allowed them to carry less bulky gear.

The machines recycle exhaled carbon dioxide by ‘scrubbing’ it with a chemical, allowing the air to be reused.

But halfway down the well, with plenty of water and bedrock overhead, Mallinson’s unit malfunctioned, an event he related with distant, factual calm. One of the machine’s automatic valves was feeding too much oxygen into the system, causing his lungs to overinflate and giving him “hamster cheeks.”

If he hadn’t been able to deal with it, it could have rendered the rebreather useless—and if he had panicked, he would have drowned.

If their equipment fails, cave divers can only survive if they stay freezing cold. “I just turned the valve off and did its job manually instead,” Mallinson said.

He still had three wells to go and would have to stick to this more demanding method the entire time, but giving up was “not an option I considered,” he said.

We carried the diving gear through a short, low passage to the next well, where the river came out. The divers sat by the shore, sipping hot Ribena and munching on energy bars.

After a few minutes they stepped into the water, donned their gear and disappeared again.

They still had a long way to go. Hours later, we ran into them for the last time, after their last, grueling dive.

Now it was past midnight and they looked tired. “The last five hours were pretty tough,” Jewell admitted. Regardless of the distance we had traveled, my body was telling me this was the time I needed to sleep.’

Five hours later, 17-and-a-half hours after entering Large Pot, they emerged from Top Sink to the fall of Cumbria. They made it! There was a welcoming committee – and festive beers.

“I’m glad it’s over. It was hard,” Mallinson said later. “It wasn’t the diving, even though visibility was only 5cm in places, it was all that crawling.

“I feel elated and privileged,” Jewell added. “It was unbelievable that so many people wanted to help us.

And some connections between the various entrances required years of hard work, by excavators removing rocks and mud from passages that had long been blocked. We were busy building.’

Meanwhile, there are hopes among speleologists that a way will eventually be found to connect the Three Counties system to the 20km network that lines both sides of the next valley to the east, Kingsdale.

This creates space for an even longer and heavier journey.

“If it happens, I’d love to be a part of it,” Jewell said. “What we’ve done is the most demanding journey in British caving, but I very much hope that won’t always be the case.”

Can these shampoos wash away misery?