A teenage mother has been left brain dead after being shot in the back of the head by a school security officer while trying to flee a fight.

Mona Rodriguez, an 18-year-old college student, would not survive, according to her family.

Rodriguez, who has a five-month-old son, is on a ventilator after the shooting, which happened Monday as she drove away from Millikan High School in Long Beach, California.

That afternoon, Rodriguez had gotten into an argument with a 15-year-old girl, the New York Post reported.

She was shot while leaving school in a car with her brother, 16, and the father of her child, Rafeul Chowdhury, 20.

The two men are under investigation for their involvement in the brawl, police told KTLA.

Mona Rodriguez, a teenage mother, was left brain dead after being shot in the back of the head by a school security officer while trying to flee a fight 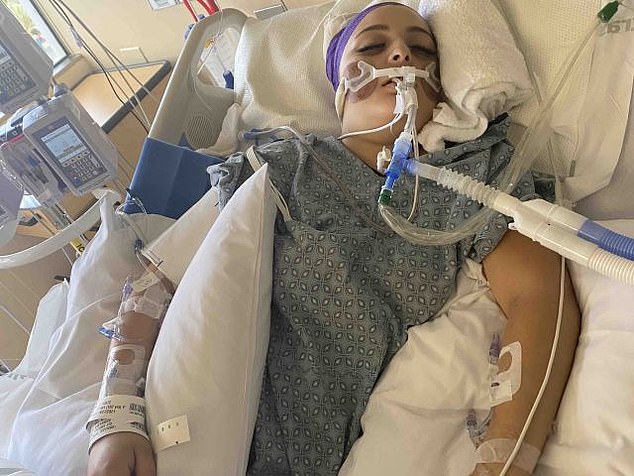 The 18-year-old student is on a ventilator and is not expected to survive, according to her family

The Post reported that video obtained by the outlet shows the officer firing two shots at the car, nearly hitting it as it exits the parking lot.

Long Beach Police are investigating the officer’s use of force and the school’s security officer, who has not been named, has been placed on leave.

Chief Inspector Jill Baker told KTLA that security officers are “highly trained and held accountable for the established standards of their profession.”

Rodriguez’s family, who spoke outside the school on Wednesday, demanded action.

Chowdhury told reporters that the officer had threatened the two girls with pepper spray.

He claimed that the girls stopped fighting and that the officer had not warned them that he would use his gun before firing.

“All we did was just got in the car and left,” Chowdhury said. “He never told us to stop quickly, and the way he shot us wasn’t right.”

KTLA reported that Chowdhury added that he and Rodriguez had been trying to have a child for a while.

‘Now we do, and they’ [Rodriguez]is gone,” he said. “Now I just have to play the part of mother and father and keep my son strong.”

Civil rights activist Najee Ali also spoke outside the school on Wednesday, saying there was “no excuse, no justification” for the officer’s actions.

“There is no excuse, no justification for this officer firing into the passenger-side rear window of a car with a woman who is unarmed. Everyone in the car was unarmed,” he said.

Long Beach Police are investigating the officer’s use of force and the school’s security officer, who has not been named, has been placed on leave. Pictured: Millikan High School where the shooting took place

“The fact is, he shot someone in the passenger seat with no regard for someone’s life in the car.”

“The only way we can stop these security agents from shooting and killing unarmed people is to have them prosecuted and held accountable for what they have done to members of the community.”

The family has set up a GoFundMe page to help cover funeral and legal costs and to support Rodriguez’s son.

“She was smart, beautiful, loving and everyone who knew her knew how big her heart was, how full of life she was and how much she loved her family, but especially her son who was proud and joyful all her life,” she says. Yessica. Loza, Rodriguez’ cousin wrote on the page.

‘We are all heartbroken and in pain we never thought we would lose'[sic] her so or so soon she had her whole life ahead of her and a careless act of a school guard left a 5 month old baby boy without a mother and we all lost someone we loved so much.’

Ciara impresses in a silver dress above the thighs for dinner