Peter Fray-Witzer, a student enrolled at Oberlin College in Ohio, wrote an op-ed in a campus newspaper complaining that “cisgender men” were installing radiators in his “safe space” dormitory

A student at an $80,000-a-year ultra-liberal university in Ohio is being ridiculed online after saying he was “angry, scared and confused” because “cisgender men” installed a radiator in his “space space” dorm.

Peter Fray-Witzer, a student enrolled at Oberlin College, posted an article in Friday’s issue of The Oberlin Review addressing school administrators for briefing him on the installation at short notice.

Fray-Witzer writes that he asked a campus official if he could be exempted from installing a radiator in his room to prevent the “break-in.”

He also complains that he felt “slightly violated” and “a little annoyed” when the contractors returned to his dorm the next day to “check the insulation.”

According to Fray-Witzer, on Oct. 7, he and other residents of the Baldwin Cottage dorm on campus received an email saying that “contractors will enter rooms the next day” to install radiators.

“This means they will be in your room for a while to complete the work,” Josh Matos, the area coordinator for multicultural and identity-based communities, wrote in an email.

Fray-Witzer wrote in response: ‘Before this email, I had not been contacted about radiator installation, so the word ‘update’ immediately struck me as false.

“I started to worry when I read the second line, which told me I had less than 24 hours to prepare for the installation crew to arrive, and I was further disturbed by the ambiguous ‘for a while’ .’

He added that he was “very averse to people entering my personal space.”

“This fear was compounded by the fact that the crew would be strangers, and that they were more than likely cisgender males.”

“Cisgender” is a term used to describe someone whose gender identity is the same as the sex assigned to them at birth.

The word is considered the antonym of “transgender” – meaning a person who identifies as a gender opposite to the gender they were assigned at birth.

The dorm where Fray-Witzer lives, Baldwin Cottage, is known as ‘the home of the women’s and trans collective’.

Oberlin, the 3,000-student liberal arts college, describes the dorm as “a close-knit community that provides women and transgender people with a safe space for discussion, community life, and personal development.” 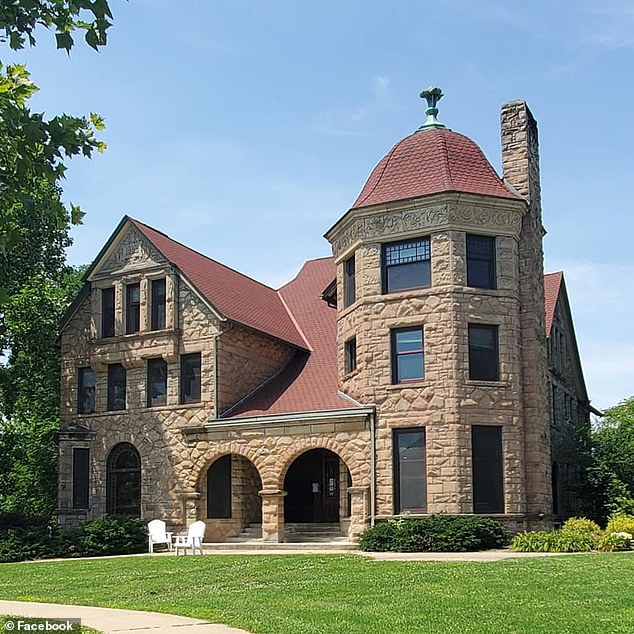 Fray-Witzer is a resident of Baldwin Cottage, an on-campus dormitory in Oberlin that is restricted to “anyone who identifies as female or trans, regardless of race, nationality, religion, assigned gender, or sexual orientation”

According to the school, Baldwin Cottage, home to 30 students, is “open to anyone who identifies as female or trans, regardless of race, nationality, religion, assigned gender or sexual orientation.”

The Oxford Dictionary defines a ‘safe space’ as a ‘place or environment in which a person or category of people can be confident that they will not be subjected to discrimination, criticism, harassment or any other emotional or physical harm’.

“Safe areas” are normally located on college campuses. They have sparked criticism from many who say they are being used to silence campus political debate and censor unpopular views.

Fray-Witzer writes that “cisgender men are not allowed to live on the second and third floors, and many residents choose not to invite cisgender men into that space.”

He added: ‘I was angry, scared and confused. Why did the College not complete the installation over the summer when the building was vacant?

‘Why couldn’t they tell us exactly when the workers would be there?

“Why didn’t they notify us until the day before installation was due to start?”

Fray-Witzer describes how the contractors arrive at the dorm. Before they showed us, he writes, “he waited anxiously.”

“The workers started to settle in common areas and I immediately saw that they were all men,” he writes. 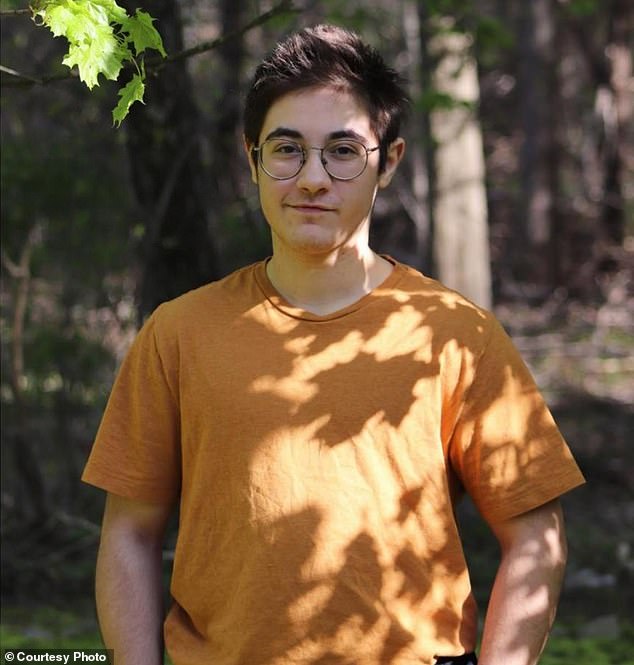 Fray-Witzer writes that “cisgender men are not allowed to live on the second and third floors, and many residents choose not to invite cisgender men into that space”

“It was clear that the College had made no special request not to allow male workers on Baldwin’s upper floors.”

Fray-Witzer continues: ‘Predicting when they would reach my room was pure guesswork.

“I was trying to anticipate whether I would be in class when they arrived, or whether I would have to welcome strangers into my room and then be ejected to give them space to work.”

When the contractors arrived, they knocked on the door of Fray-Witzer’s dormitory.

He writes: ‘When there was finally a knock, I scrambled to put on my mask and repeatedly shouted, ‘I’m coming!’ through the door.

“Four or five construction workers stood outside, accompanied by someone I could only hire from—by his neat polo shirt and clipboard—as a college emissary.

“We stared at each other for a moment before I stepped aside to let the workers in.

“The emissary began to put out platitudes that the work would not be long and encouraged me to prop my door open.

‘I meekly asked if I shouldn’t have a radiator installed in my student house.

“I knew the answer was no before I even said it, but hey — worth a try.”

Fray-Witzer writes that when he returned from class, “Polo Man warned me” that “they would come back later in the week to check the insulation.”

“I couldn’t help but think that while there were other dorms that were affected by the installation, Baldwin Cottage was one of the worst places for it to happen,” writes Fray-Witzer.

“There are countless reasons for wanting to live in Baldwin Cottage, but many people – myself included – choose to live there for an added measure of privacy and a sense of security and protection.

“A significant proportion of students choose to live in Baldwin because they have been victims of sexual assault or abuse, have experienced a history of invasion of privacy, or have some other reason to fear cisgender men.” 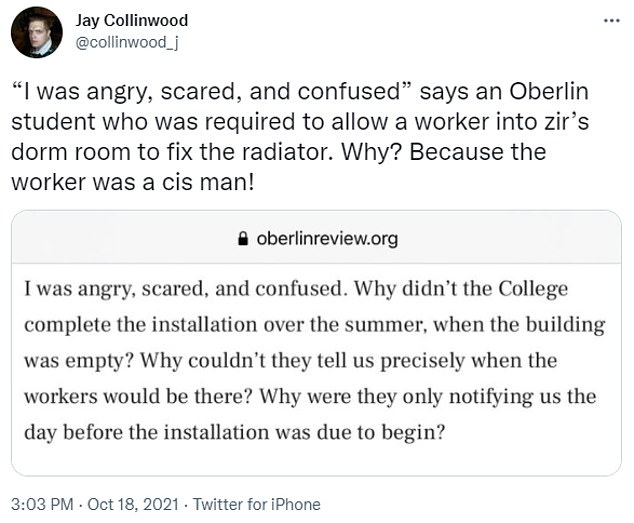 Fray-Witzer claims that other students shared his concerns about “being subject to the whims of the contractors.”

‘Of course I understand that these kinds of installations are routine; the College needs to improve its facilities from time to time, and who am I to stand in the way of that?… But why not finish the project during the four months of the summer semester, when the building was empty? Why don’t you warn us about the break-in sooner?’ Fray-Witzer writes.

“They should have taken steps to keep students comfortable and safe — especially those who chose to live in a specially designated safe space.”

“This guy who is “afraid, angry and confused” that he might be forced to interact with another man who is straight or gay (ie non-binary) is top Oberlin,” one Twitter user wrote.

Journalist Glenn Greenwald tweeted: “Students in Oberlin, who cost $80,000 a year to participate, are angry and worried that the low-paid white-collar workers sent to fix their radiators are cis men.

Perfect illustration of how damned identity links not only ignore class oppression, but amplify it: Reflect on the rotten roots of an ideology that convinces highly privileged and wealthy students at elite colleges that the guys who come to fix their radiators are their oppressors, and that those whose families pay 80k/year are the oppressed.’

Another Twitter user commented: ‘Simple solution for the workers: don’t install radiators in the rooms of students who don’t want you in their rooms. It’s not your problem.’

Another joked: ‘Gosh, what an awkward situation. My thoughts are with those who are traumatized lol.’

Another commenter wrote, “Will they be survivors of some sort after this?”

One Twitter user wrote that the writer’s opinion amounted to “a public admission of the need for therapy.”

NRL: Phoebe Burgess doubles down on her damning all-encompassing interview on Sam

Sinister SELFIES by Fred and Rose West’s ‘House of Horrors’

Jack Dorsey goes on the road