A surgeon’s poignant sketchbook from World War I has been unearthed more than a century later, along with never-before-seen photographs of Britain’s bloodiest conflict.

Captain Theodore Howard Somervell treated hundreds of wounded British soldiers in a field hospital at the Battle of the Somme as a member of the Royal Army Medical Corps.

He was one of only four surgeons to work in full in a tent while dozens of victims lay dying on stretchers outside.

The first day of the 1916 offensive was the bloodiest in British military history, with nearly 20,000 killed and a further 37,000 wounded.

Capt Somervell, a talented artist, later drew sombre images of some of the grim scenes he encountered, with his historic sketchbook set to go up for auction this week in Gloucestershire.

One of his finest works is a pencil sketch of a soldier on the operating table, surrounded by a nurse and doctors.

Another watercolor shows the bodies of soldiers lying on a swampy battlefield on the Western Front.

Captain Somervell, who was honored by being mentioned in Despatches, drew ruined monuments, including churches reduced to rubble in the deadly barrage. 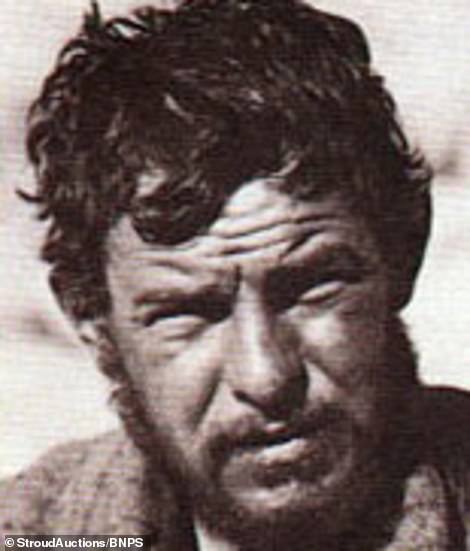 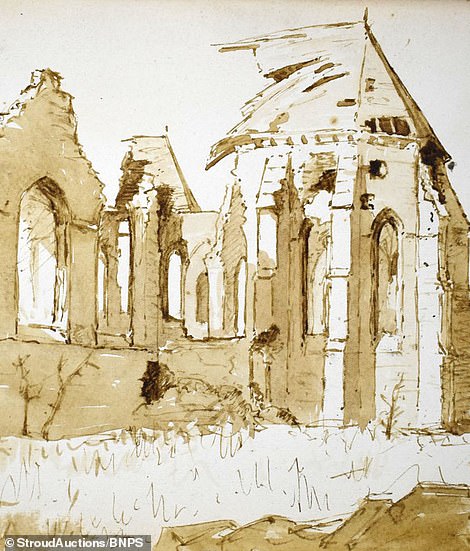 Captain Theodore Howard Somervell (left), a talented artist and surgeon, drew bleak images of some of the grim scenes he encountered during World War I, with his historic sketchbook going up for auction this week 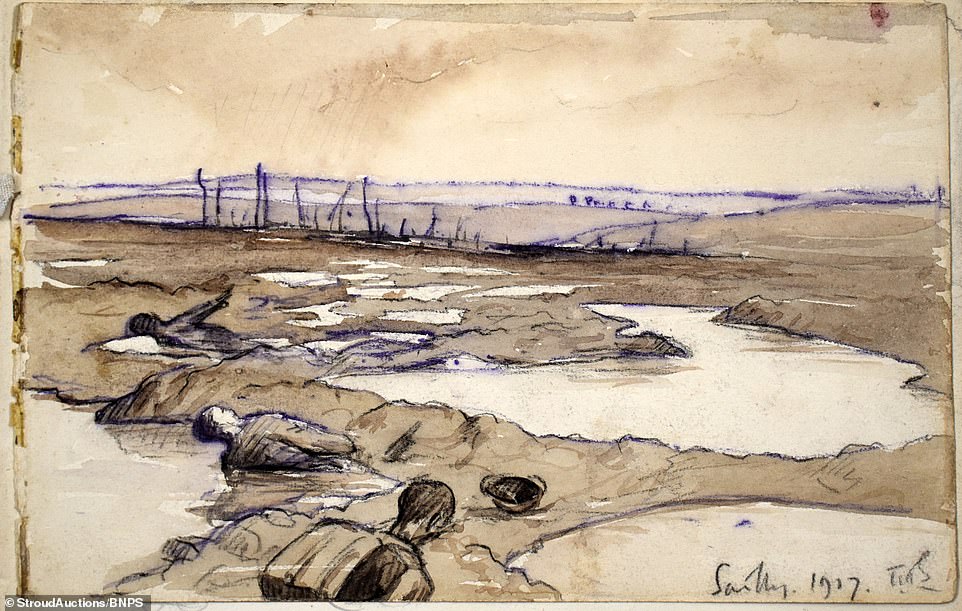 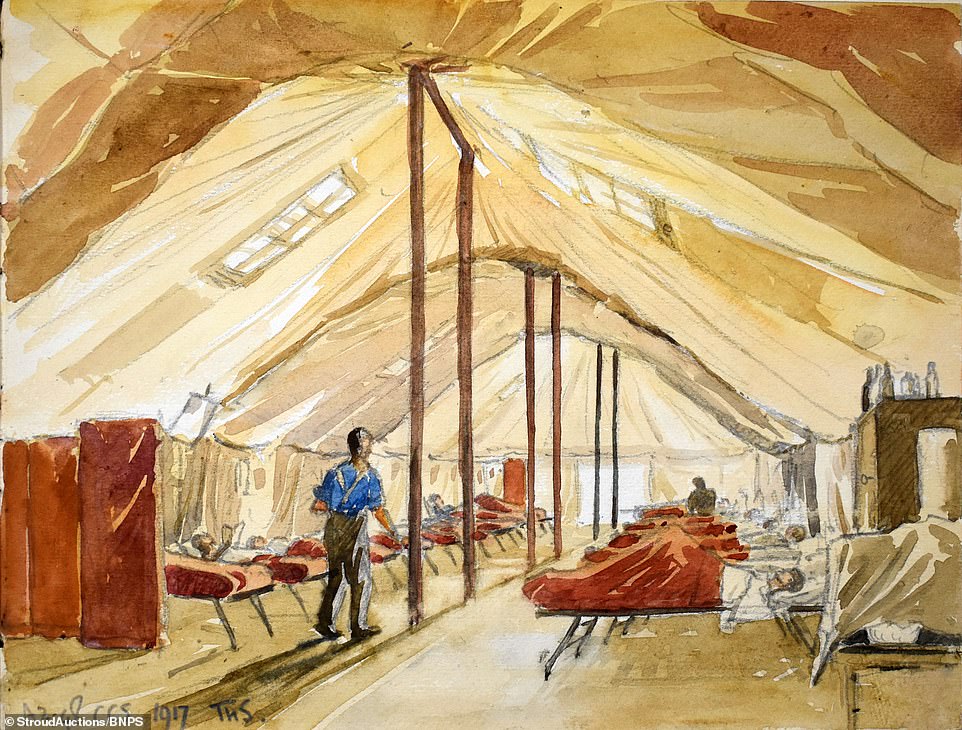 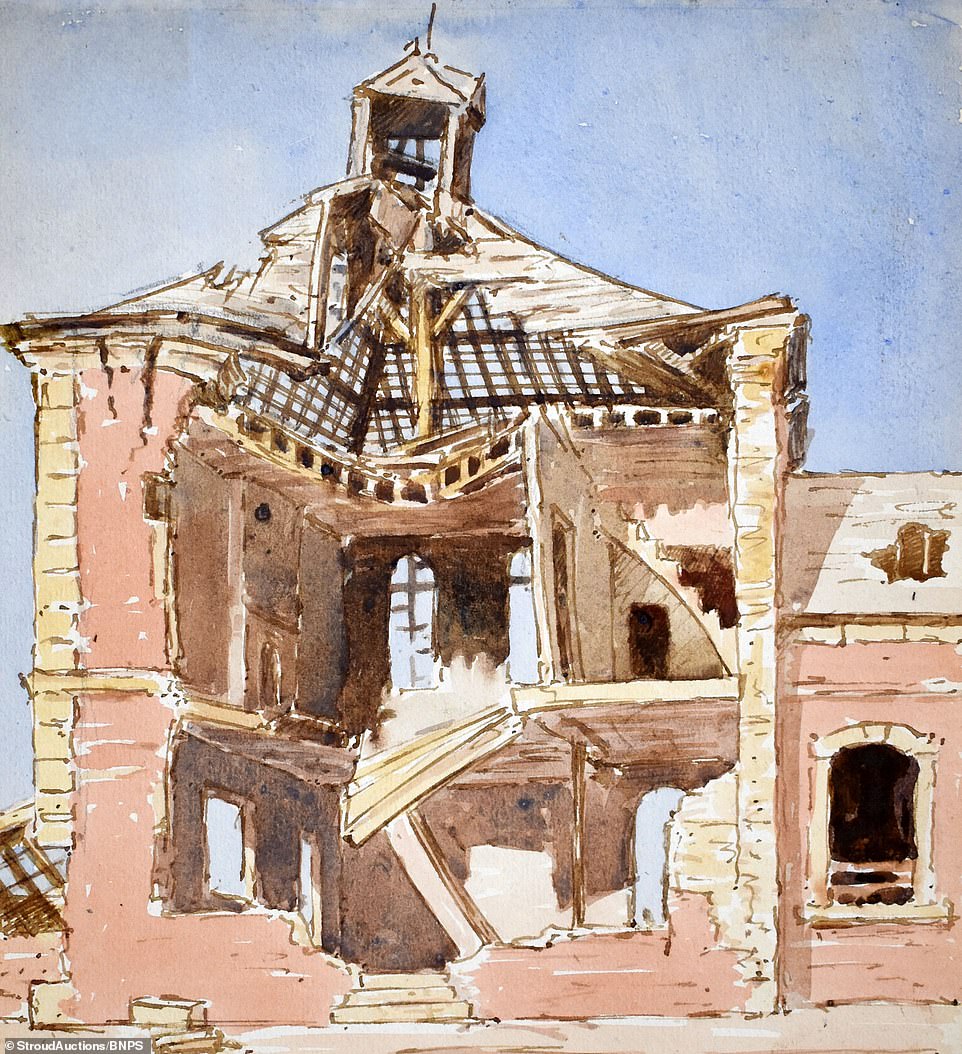 Captain Somervell, who was honored by being mentioned in Despatches, drew ruined monuments, including churches reduced to rubble during the Battle of the Somme

Howard Somervell: Surgeon, Olympian, and Artist whose sketches reveal some of the unseen horrors of World War I

Howard Somervell was born in Cumbria in 1890. He studied natural sciences at Cambridge University (1911-1913).

During World War I, he served as a captain in the Royal Army Medical Corps and treated wounded British soldiers at the Battle of the Somme.

His post-war exploits earned him his qualifications in surgery from University College Hospital in London.

But he was also an avid mountaineer who was part of two British-led expeditions that planned to climb Mount Everest in 1922 and 1924.

His efforts in 1922, where the group was within 500 meters of reaching the summit, earned him a gold medal at the 1924 Winter Olympics.

David Somervell, his son, told The Guardian in 2012, “The problem with my father was that he was a very good surgeon, a very good artist, a good musician and also a very spiritual man.”

He also sketched captured tanks, machine guns and howitzers, as well as the German front line.

Capt Somervell’s work brilliantly captured the scenes of Marcellave, Miramont, St Quentin and Beauvais in northern France as the horrors of the First World War rage on.

In total, his sketchbook contains 50 of his drawings made between 1915 and 1918, as well as some sketches of his recovery in the Lake District in his native Cumbria.

He also took previously unpublished photos of frontline life, including a handful of shots taken in a live operating room.

But the horrors he experienced during the war turned the budding artist into a pacifist, and he would later travel to India in the 1930s as a missionary and physician to spread a message of peace.

His other notable achievements include his Olympic gold medal, awarded in 1924 for achievements in mountaineering, for being part of the Mount Everest expeditions in the 1920s that came within 500 meters of reaching the top of the mountain.

Captain Somervell, who served in the Royal Medical Corps, died in 1975 and his sketchbook and other artifacts are sold by a direct descendant of Stroud Auctions, of Gloucestershire.

The sketchbook is tipped to sell for £800.

Auctioneer Mark Rozelaar said: ‘Somervell worked in a field hospital at the Battle of the Somme and you can imagine what he saw was horrific.

His sketches do not hide the horrors he faced and his war experience made him a pacifist.

It is said that he was impressed by the British victims who never asked to be treated first, regardless of their suffering. 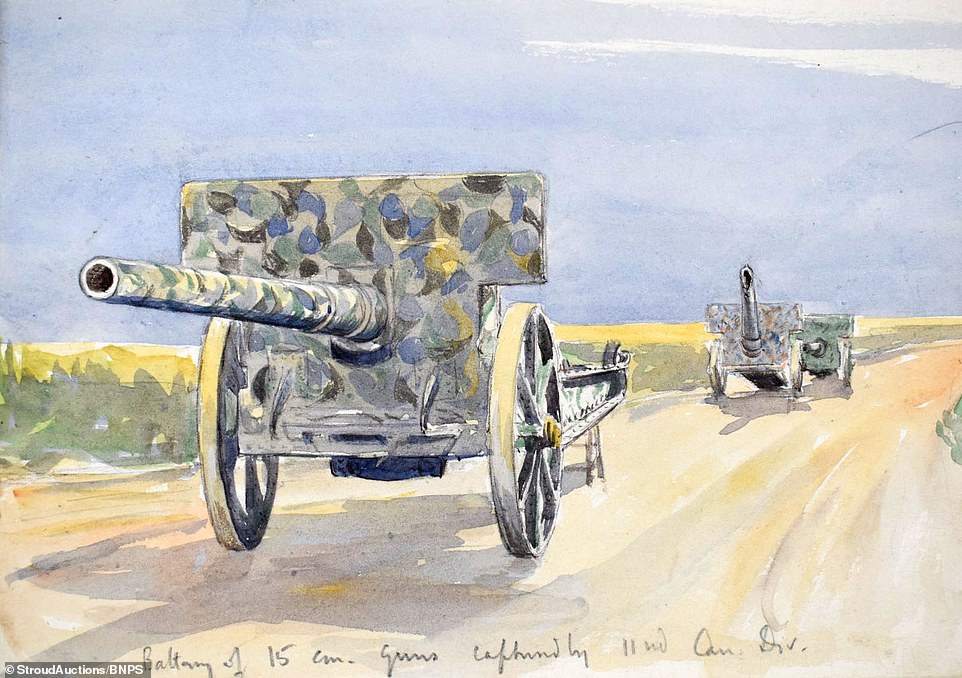 Capt Somervell also outlined captured tanks, machine guns and howitzers as well as the German front line during his tour 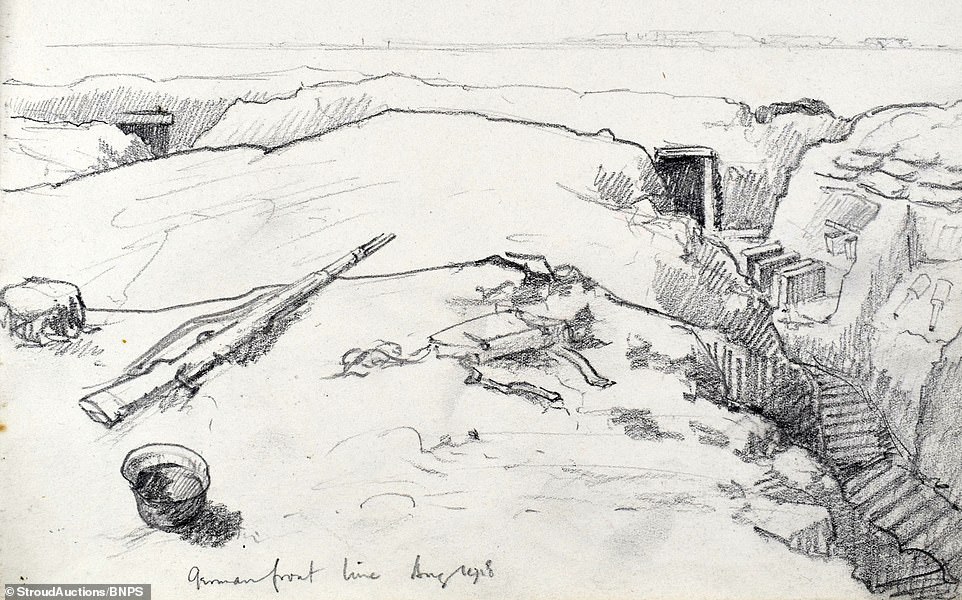 Capt Somervell’s historic sketchbook will be sold at auction for £800. Pictured: A pencil sketch of the Allied front line in France. 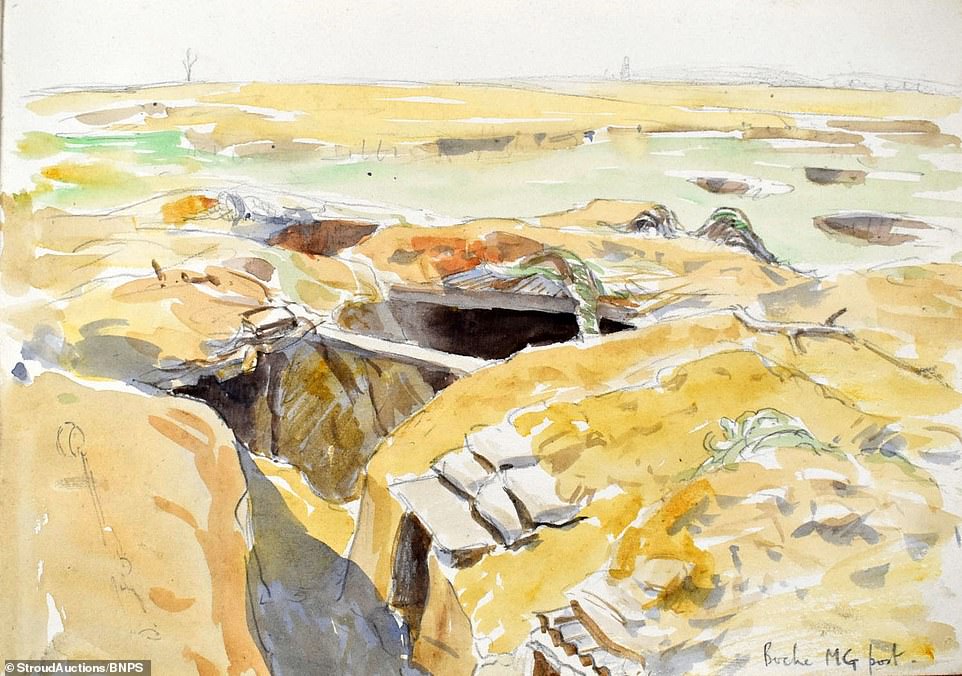 Capt Somervell’s work brilliantly captured the scenes of Marcellave, Miramont, St Quentin and Beauvais in northern France as the horrors of World War I rage on 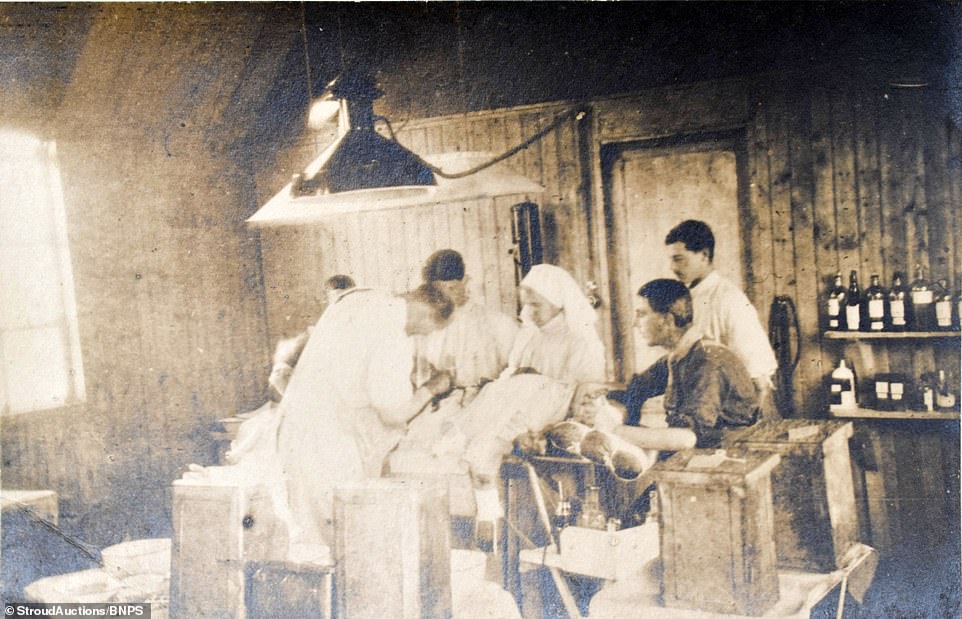 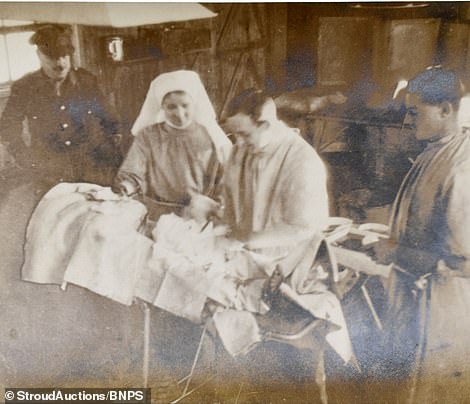 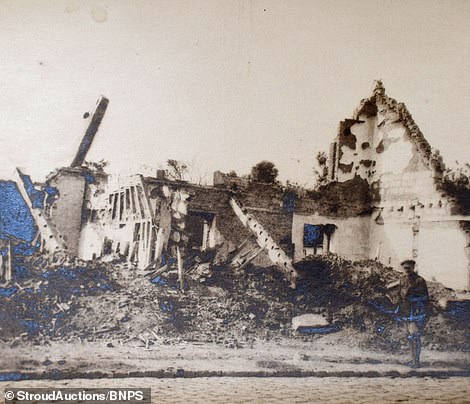 The horrors he witnessed during the war turned the budding artists into a pacifist, and he would later travel to India as a missionary and physician in the 1930s to spread a message of peace.

“His archive is being sold by a family descendant from the Gloucestershire area.

“While he may have exhibited some of his artwork during his life in the Lake District, these sketches may not have been seen for years.”

The sale will take place on Wednesday.

Battle of the Somme: one of the deadliest battles in history

The Battle of the Somme, which lasted 141 days, was the bloodiest battle of the First World War.

An estimated 24,000 Canadian and 23,000 Australian soldiers also fell in the four-month battle.

The British and French joined forces to fight the Germans on a 15-mile front that left more than a million dead or wounded on both sides.

The battle began on July 1, 1916 and lasted until November 19, 1916. The British managed to advance seven miles, but failed to break through the German defences.

On the first day alone, 19,240 British soldiers were killed after going ‘over the top’ and more than 38,000 were injured.

But on the last day of the battle, the 51st Highland Division captured Beaumont Hamel and captured 7,000 German prisoners.

The plan was for a ‘Big Push’ to relieve the French troops, who were besieged further south at Verdun, and break through the German lines.

Although it took the pressure off Verdun, it did not bring about a breakthrough and the war dragged on for another two years.

Anorexic Survivor Finally Gets Everything Free After Getting 2 Stones