Protester, 41, filmed kicking a dog during an outrageous anti-vaccine riot that turned Melbourne into a battlefield, is finally charged five weeks later

An anti-vaccine protester has been tracked down and charged five weeks after he was filmed kicking a dog during a violent riot in Melbourne.

RSPCA Victoria has charged a 41-year-old man with animal cruelty over the images during the protest outside CFMEU headquarters on Elizabeth Street on September 20.

Shocking footage shows the protester trying to lunge at a man during the chaos before seeing the man’s leashed dog kick. 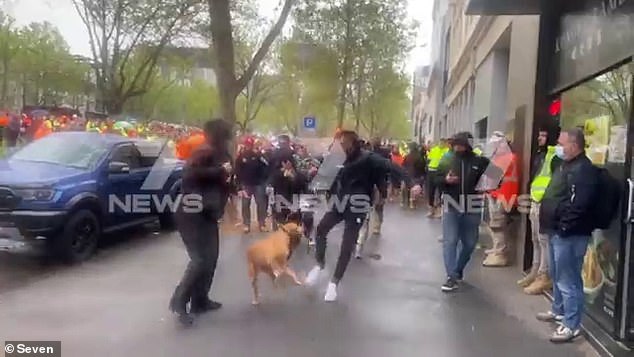 A wild mob then surrounded the accused animal abuser as he pushes one of the men trying to confront him.

After the video of the kick started circulating on social media, RSPCA Victoria Superintendent Michael Stagg said it was inundated with reports of animal cruelty.

“Many concerned Victorians reported the incident to both the Victoria Police Department and the RSPCA Victoria’s Inspectorate, which has the authority to enforce Victoria’s animal cruelty laws,” he said. 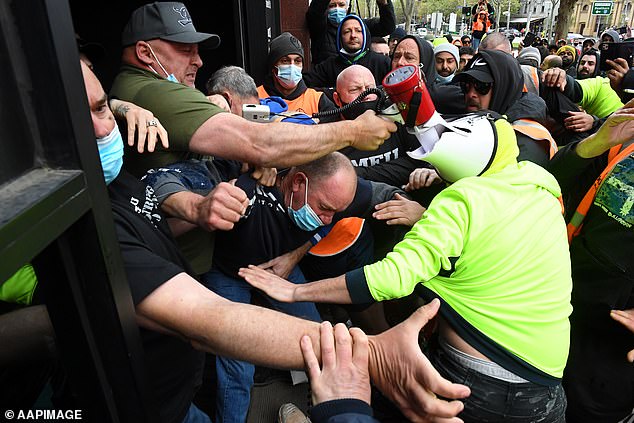 “Every incident of animal cruelty is serious and the Victorian public is the eyes and ears of the RSPCA when it comes to these matters.

He said the RSPCA was determined to hold animal abusers to account and insisted that all cases reported by Victorians would be thoroughly investigated.

The protester charged with kicking the dog could face up to a year in prison or a hefty fine of more than $45,000 if found guilty.

RSPCA Victoria conducted the investigation together with the Victoria Police Department and the case is now in court. 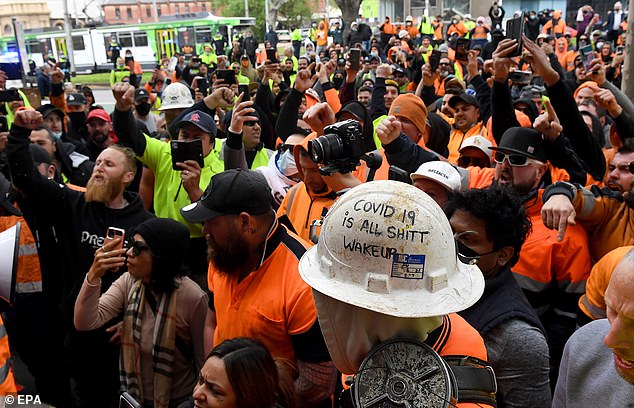 The protester could face up to a year in prison or fines of up to $45,000 if found guilty (photo, protesters gather at CFMEU headquarters in Melbourne)

“Kicking a dog is not an answer to a human dispute. I hope the culprit is identified,” said one woman.

Another added: ‘Anyone who attacks an animal just because it is there deserves to be done the same. There is absolutely no excuse to do that… NONE!

Anyone concerned about the welfare of an animal is encouraged to report it to RSPCA Victoria online or by calling 9224 2222.