A Portland city commissioner who has called to relieve the police has ordered the city’s Bureau of Transportation to use traffic barrels in an effort to curb gun violence.

Transportation Commissioner Jo Ann Hardesty ordered the Bureau of Transportation to install the orange traffic barrels in a six-block area in the Mount Scott-Arleta neighborhood, which has seen a series of shootings in recent weeks.

Some are linked to high-speed drivers, the Portland Tribune reports.

Hardesty noted that there are no “easy solutions” to solving the shooting epidemic, saying officials need to bring a creative spirit of “all hands on deck” to combat the problem.

“I direct the PBOT to be more active and involved in holistic community security solutions that can complement the role of police and other agencies in this effort,” she said in a statement on Oct. 1. 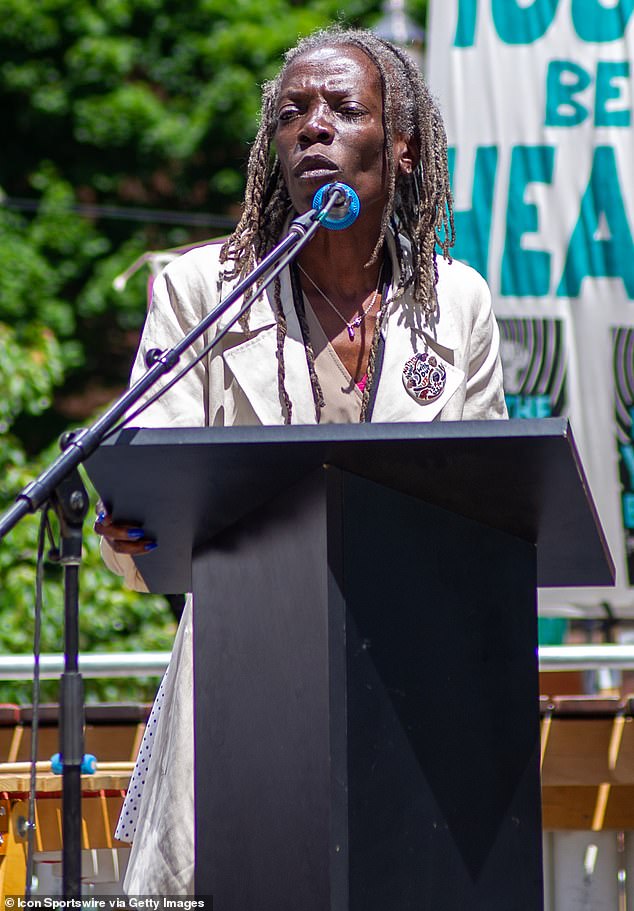 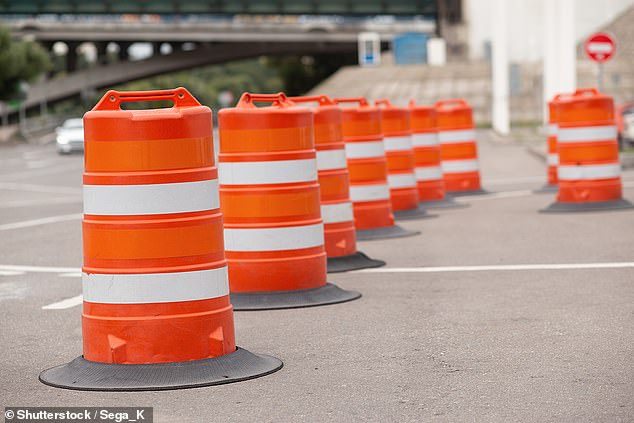 City workers have already placed eight traffic barrels nearby, the Tribune reports, and 18 more will be added next week.

After that, Hardesty said, she will evaluate the program and consider taking further action. The Bureau of Transportation estimates the cost of installing the new barrels at $2,000 to $3,000 in total.

“I understand there are neighborhoods all over Portland that would like to see this kind of close collaboration,” she said. “At this point, neither PBOT nor my office have the resources or capacity to make that happen, but if this pilot is successful, it will provide a budget proposal to enable more of this action.”

Local community activist Nadine Salama praised the move and said she contacted the commissioner in August about the increasing gun violence, and met with her staff the next day to discuss the matter.

“It’s been a nightmare for many of us,” she said. ‘We have been repeatedly told that the PPB cannot help due to personnel problems.

“We understand that this won’t solve everything,” she continued. “It’s one of the many steps we’re working on with the commissioner and her officer to bring about change.”

Derek Sims didn’t seem too happy with the plan, though.

He told the Tribune that he planned to sell his house and move to Florida after witnessing three drive-by shootings in two weeks.

“The barrels are sprayed and broken down every night,” he said of the cones already placed nearby as part of the Safe Streets strategy — designed to reserve more lane space for cyclists and pedestrians. 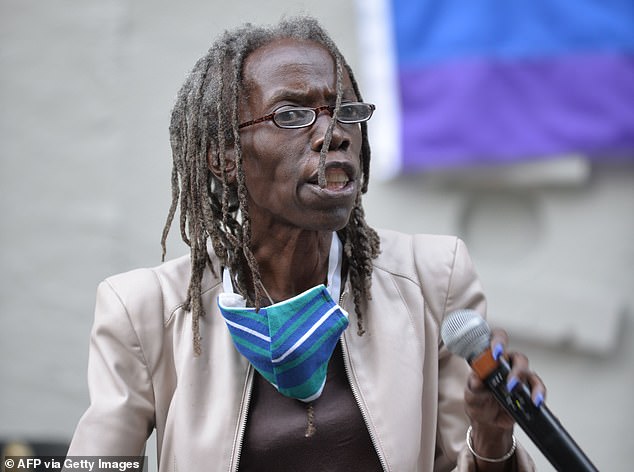 Portland City Commissioner Jo Ann Hardesty has called for the police Rapid Response Team to be formally disbanded after all members resigned in protest. 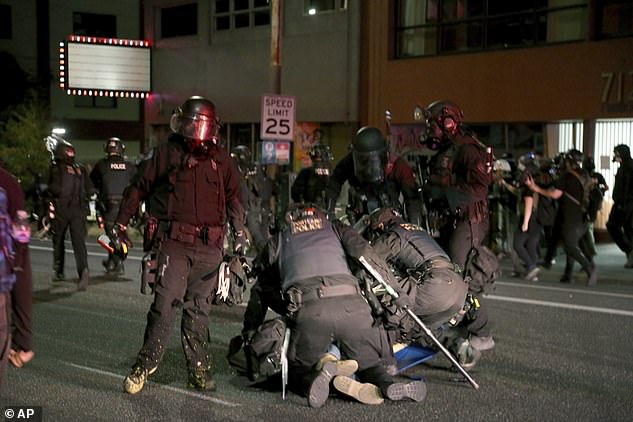 All 50 members of the team resigned after Officer Corey Budworth was charged with beating a photographer during an August 2020 protest. The photo shows officers tackling a rioter in Portland the same night.

Hardesty has previously stated that most 911 calls are unnecessary and was one of the city’s leading advocates for saving $18 million from the Portland Police Department’s budget.

In June, she labeled the 50-strong Oregon city riot police, which resigned in protest as a “rogue paramilitary organization,” and called for its formal dissolution.

The team had resigned in the summer in protest after officer Corey Budworth was charged with allegedly beating a photographer during an August 2020 protest.

She said in a statement the resignation is a sign that “the good old boy network is crumbling and we can either be part of the change or part of the status quo — but the arc of justice is bending fast, and it’s absolutely necessary for Portland City Council to end up on the right side of history.”

But last year, she’d faced hypocrisy when, in the midst of her efforts to punish the police, she called 911 to report that a driver had dropped her off at a gas station she claimed was closed for the night.

The Lyft driver refused to close the windows for her in November 2020 due to concerns about COVID, and when Hardesty complained, he canceled the ride and told her to get off at a gas station on the side of the road.

She repeatedly claimed in the aftermath that the Chevron station was closed, despite shipping records showing it was open at the time of the 911 call.

In the aftermath, she published an open letter addressing the incident and once again insisted that the gas station be closed.

“That night I faced several threats: a Lyft driver threatening to call 911 and the potential to be stranded alone, late at night on the side of the highway at a closed gas station,” she wrote.

“The potential outcomes of both situations were not only terrifying, but potentially deadly.” 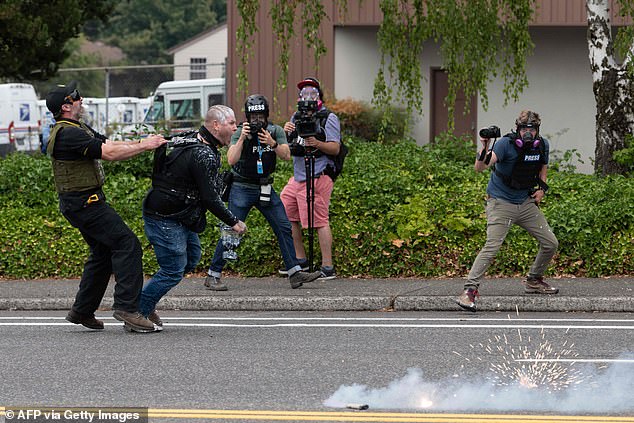 Members of the Proud Boys clash with anti-fascist activists during a far-right demonstration on Aug. 22, 2021 in Portland, Oregon 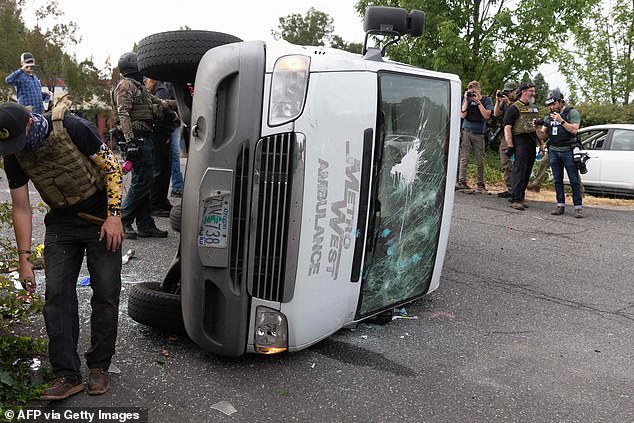 An overturned van lies in a parking lot after an altercation between members of the Proud Boys and anti-fascist activists following a far-right demonstration on Aug. 22, 2021 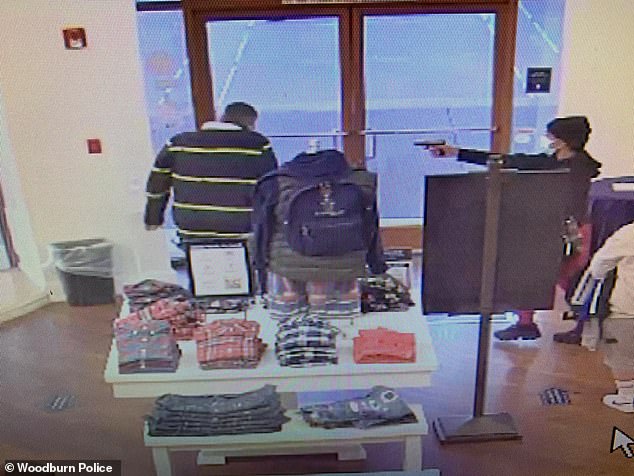 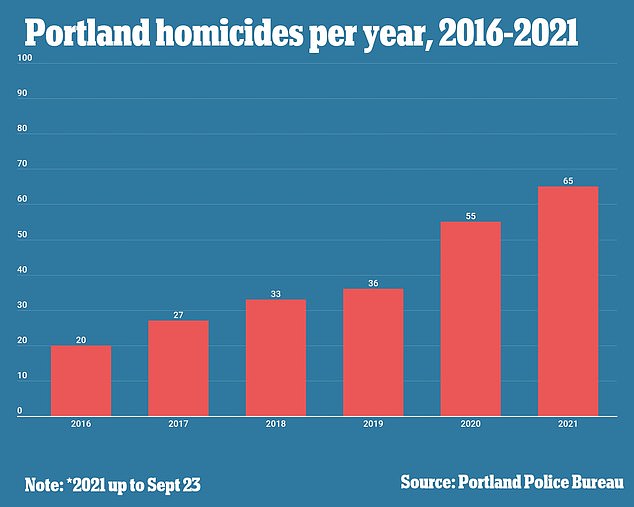 The city’s murder rate has risen, and the city expects to experience its deadliest year on record

Meanwhile, Portland is on track to experience its deadliest year yet, according to KATU, with 837 shooting incidents between January 1 and August 31.

The largest year-on-year increase was reported in the Northern District, where there were 383 shootings as of August 31 — more than double the number in the same period in 2020.

There were also 60 reported homicides during that time period, according to Portland Police Department statistics.

Then, in early September, Oregon Live reports, there were nine shootings that took place over the course of 16 hours between August 31 and September 1.

Sergeant Kevin Allen said at the time he didn’t know if that was a record: “But our concern is not the number, because even one shooting causes trauma to our community and multiple shootings like this exacerbate that trauma.”

A few weeks later, however, there were seven more shootings that took place over a 15-hour period, with three wounding between 2 a.m. and 7 p.m. on September 21.

And in the Mount Scott neighborhood, where Hardesty proposes installing traffic cones, a neighbor captured the sound of gunshots from a nearby shooting in early September, and two weeks later two bullets hit a car containing a mother and son. and recreational truck was also shot in the September 29 incident.

On Friday, just after 6 a.m., a man was killed in southeast Portland. According to police, the suspect had left before the police were called and no arrests have been made.

It was the 66th murder of the year.

A man who lived near the shooting told KATU that he had compiled a file of photos and videos of all the nearby shootings that have taken place in recent months.

“I’ve lived in Portland for 35 years and I’ve never witnessed such gun violence as we see,” said the man, who declined to be identified.

“In the past three months, I’ve called 911 at least 8 times about shootings within two blocks of my apartment,” and I haven’t called for 50 other shootings that occurred during the same time frame.

Over the summer, he said, a bullet flew through his window and “came within two inches to kill me.”

Just a few weeks later, he was out walking his dog when “three shots rang out in the middle of the night.

“I hit the ground with my dog,” he said. “I grabbed my phone. I started filming.’

But all he could do was catch the moving car.

“It’s insane to think we live in a city or a city or society where that’s acceptable behavior.”

He said he no longer lives in Southeast Portland, but is just surviving.

“Even for myself, I had to take PTSD medications and antidepressants to cope with the effects of being shot multiple times and hearing gunshots at night,” he said. “It’s not just unfair, it’s not just unjust, it’s unthinkable.”