PETER HITCHENS: We’re in the age of curfew – and there’s no getting away from it

Prepare to be banned from travel and required to show wads of paper or allow intrusive apps to be installed on your phone.

I can’t say when this will be. But after last week’s parliamentary report on the Covid panic, you can rest assured that it will happen. Next time it might not be Covid. But that doesn’t matter.

A terrifying principle has been established that shutting down society is a wise and proportionate response to disease.

If you want to know how bad this can be in a supposedly free country, take a look at what is happening over and over in the Australian state of Victoria and especially the once glorious city of Melbourne.

Prepare to be confined to your home again. Prepare to be prevented from working and receive state benefits. Prepare to destroy your education. (Above, an empty street in Leicester in March 2020)

A bullying and overbearing police force has allowed themselves to be used to enforce the orders of an unintelligent head of government. Life was miserable, limited and supervised.

And no one knows when this will end or if it will start again.

I mention this because I am pretty sure that the next time our country goes for a national shutdown, it will be much better prepared and have much less loopholes than last time.

Those into this sort of thing will have looked closely and will have noticed how some people have managed to stretch the rules a bit to make life more bearable. There won’t be. Show your papers, have them scanned or else.

And all based on what? Parliament’s Science and Technology Committee and the Health and Social Care Committee simply assume that shutdowns work. 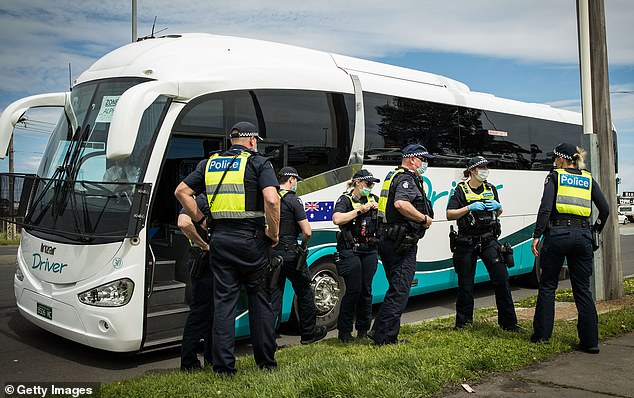 If you want to know how bad this can be in a supposedly free country, take a look at what is happening over and over in the Australian state of Victoria and especially the once glorious city of Melbourne. (Pictured, Victoria Police in early October)

This belief is now the conventional wisdom, the groupthink that these MPs strangely claim affects others.

Evidence from around the world does not support this at all. From Japan to Sweden, countries that instead used light restrictions did not do significantly worse than those that placed their people under rigid house arrest.

And the hardliners didn’t do particularly well. Take the Czech Republic, for starters, much praised by shutdown enthusiasts.

It went into lockdown on March 16, 2020, slammed tight controls at its borders and issued Europe’s first mask decree. But that fall, the disease returned and stopped again — and the process repeated itself in December.

It currently has the sixth highest number of deaths per million, 2,860, compared to quiet Sweden of 1,451. And that despite the fact that Sweden, like us, has treated its care homes badly.

Studies from around the world show that there is no clear link between shutdowns and containment of the disease. In addition, this is the first time in human history that the healthy, rather than the sick, has been quarantined.

What we need are better MPs and more vigilant media. But without them, we’ll soon be back in the days of the Sunbathing Squad, the Picnic Squad, the Front Garden Squad, and drones flying over remote moors following hikers trying to get away from it all.

This is the age of curfew. I wonder what other part of the Middle Ages will they reintroduce next?

On a rare trip on the London Underground, I suddenly realized that a public address announcement had just told me to make sure my shoelaces were tied.

I braced myself for a motherly voice telling me to tuck in my shirt, or maybe a mechanical arm sticking out to wipe my nose for me.

I’ve never really liked the phrase “Nanny State” because it’s unfair to nannies, who often do a good job.

But the face mask and hand sanitizer era has brought us back to our infancy and has given authorities some pretty weird ideas about what their business is now.

The good life now gets a nasty side

A sordid stage version of the TV classic The Good Life shows just how confused our national minds have been by dope.

In the play, which was previewed in Bath, but I’m afraid it’s destined for a London theater, the Goods smoke marijuana and give cannabis-infused bread to their respectable neighbours, the Leadbetters. Tee hey. Very funny, isn’t it.

In fact, this drug was already far too common in the English middle class in the 1970s. But then and for many years after, those who used it were often either embarrassed or afraid to admit they did it. 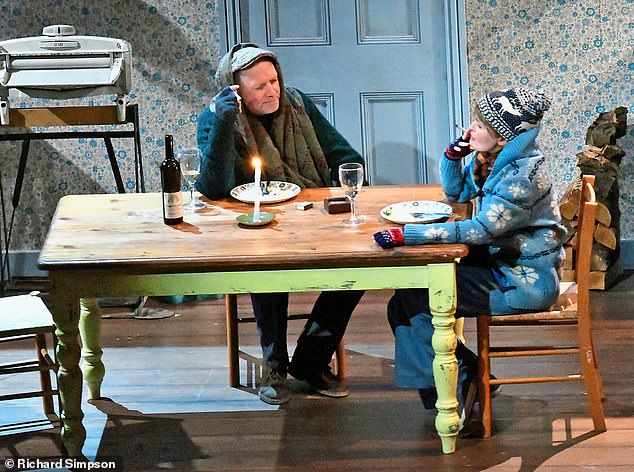 A sordid stage version of the TV classic The Good Life shows just how confused our national minds have been by dope. In the play, which was previewed in Bath, but I’m afraid it’s destined for a London theater, the Goods smoke marijuana and give cannabis-infused bread to their respectable neighbours, the Leadbetters. Tee hey. Very funny, isn’t it. (Above, Rufus Hound as Tom and Sally Tatum as Barbara in the production)

In the intervening half century, hashish has become less and less of a joke. A terrifying number of people have developed mental illness after using it, and it is increasingly associated with insane violence.

The suspect in the bow and arrow mass murder last week in Norway was quickly found as a known marijuana user.

Is there another example where a drug becomes more acceptable because it also becomes more apparent that it is dangerous to users and society?

I’m amazed at how little we’ve heard from the Royal National Institute of Blind People (RNIB) about the threat of e-scooters.

After all, these pesky little motorized toys, so often driven on the sidewalk, pose a greater threat to the blind and partially sighted than to almost everyone else.

Well, now I learn that the RNIB – an organization I normally admire a lot – has received fees from e-scooter companies for ‘consultancy’. They told me, ‘We do provide consultancy services for which we charge.’

But when I asked how much these fees were, they replied, “We can’t go into detail on those fees.” When I said this might have affected their attitude towards e-scooters, they said it didn’t.

They argued: ‘While we work with e-scooter operators to make the industry more inclusive, that doesn’t stop us from campaigning on key aspects of the e-scooter debate and making it clear that there is behavior like driving on the sidewalk, that cannot be tolerated. 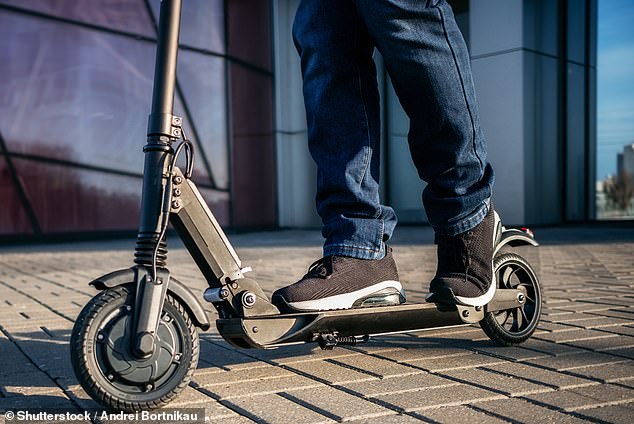 I’m amazed at how little we’ve heard from the Royal National Institute of Blind People (RNIB) about the threat of e-scooters. (File image)

RNIB believes that a combination of campaigning, influencing, training and advising offers the best opportunity to effect change.’ Well, I don’t agree. When e-scooters are legalized, they will be everywhere.

The police, largely absent from the streets, will do almost nothing about it. Smaller organizations than the RNIB warn that legalizing e-scooters will make our roads and sidewalks much more dangerous.

But they have had little influence on Transport Secretary Grant Shapps. He shows every sign that he is determined to unleash this additional misery on our streets next year. Alleged “experiments” across the country undermine existing law, banning them completely.

Even the police are confused about what the law is. Last week, when I confronted an illegal e-scooter rider driving down a sidewalk, he sneered that it would soon be legal so I could get lost.

Meanwhile, a slick PR campaign is working, falsely claiming that e-scooters are green and will reduce car use. If only the full power of the RNIB were against it, I think things would change.

If they stop taking money for e-scooters and set up such a campaign, I’ll be happy to rattle a can for them to help make up for what they’ve lost.

If you want to respond to Peter Hitchens, click here

The Batman trailer: Robert Pattinson shows off his blistering chemistry with Zoe Kravitz. from Catwoman

Is a Cambridge president right in warning her students against putting off pregnancy?