Is God Is (Royal Court, London)

So tennis rackets for air guitars, hairbrushes for microphones and earplugs for health and safety: Rock Of Ages is back on the road. Starring Strictly’s nicest dude, Kevin Clifton, as the worst dude in this 80s rock musical parody: Stacee Jaxx.

Yes, it’s all in the worst possible taste – and post-show tinnitus is guaranteed. The cheerfully made-up story tells of Sherrie from Kansas who arrives on the Sunset Strip in Los Angeles with a dream of becoming an actress.

She falls for shy wannabe rock god Drew and is seduced and pushed aside by the legend and love rat Stacee. 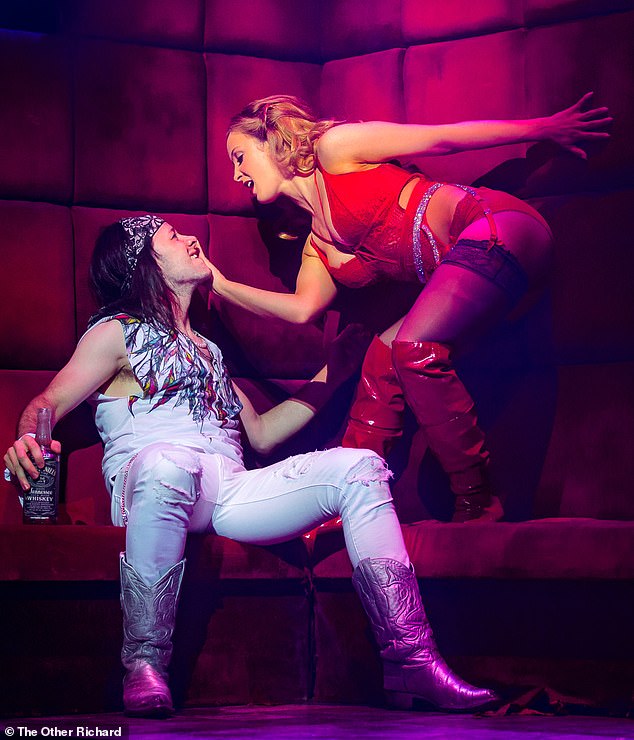 Wonderfully horrific: Rock Of Ages is back on the road. Starring Strictly’s nicest man, Kevin Clifton, (pictured with Rhiannon Chesterman) as the worst man in this 80s rock musical parody: Stacee Jaxx

Let’s be honest; no one is here for the story. The largely female crowd on the night I went were clearly excited for the glam metal belters.

They came to chat and cry – and they did right from the start (first: Starship’s We Built This City).

They waved along with Sherrie and Drew to Foreigner’s Waiting For A Girl Like You; and turned positive vulpine for I Want To Know What Love Is, when Stacee takes Sherrie on a “date” in the men’s lavvy.

And yet the story gets in the way, reducing the songs to snatches that rarely settle down.

Lonny, Joe Gash’s narrator, could do more to keep up the tempo between songs, rather than making lame jokes.

Sweet and melodic Rhiannon Chesterman lifts the energy as Sherrie; and Clifton is amazingly hideous as the oversexed Stacee, in a rock wig, white jeans and cowboy boots with winks. But it’s Luke Walsh, as Drew, who stops the show by holding a rising note for what feels like a whole minute. Otherwise Nick Winston’s loud and lewd production is too often too loose and there are way too many willy gags.

Andrew Carthy’s Franz is a camper than a row of tents. Maybe two rows. But he’s almost worth it for the sentence, “I’m not gay, I’m German!”

A dazzling play at the Royal Court!? Believe it. Be it by accident or by design, the flop factory has finally found something worth checking out: a twisted Kill Bill-style Tarantino-esque revenge story called Is God Is.

Our femmes fatales are twin sisters from Kentucky who discover that their long-lost mother is still alive, but living in a nursing home with horrific burns after their father tried to kill her 18 years earlier.

The mother looks like Davros from Doctor Who and orders her girls to take revenge on their father.

What unfolds is a buddy story/road trip with the unrelenting logic of Greek tragedy. 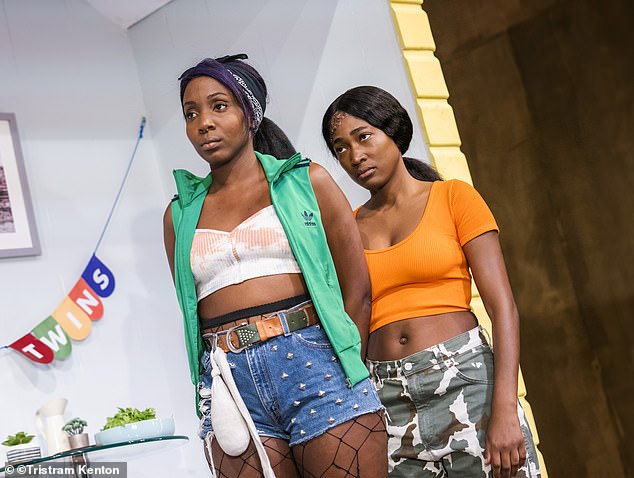 Chilling: The Royal Court has finally achieved something worth watching: a twisted, Tarantino-esque, Kill Bill-style revenge story called Is God Is. Pictured: Lawrance with Adedayo in Is God Is

That’s matched by Ola Ince’s spirited production and Chloe Lamford’s cartoonish design – including a photo of a winding desert road, adorned on a huge curtain that hangs behind the girls’ fateful destiny: a roll-on yellow house with teal shutters. , somewhere in California.

And Cecilia Noble cools the blood as their bedridden, pagan deity Mama, who demands that they make sure their father is “really dead… completely dead.”

That mix of dippyness and darkness makes this show very niche, but also a twisted delight.

Siegfried was a fascist summer camp in Long Island, New York, where ex-pat German Nazis took their kids for sports, hiking — and political indoctrination — in the 1930s.

In addition to shorts, brown shirts and Teutonic entertainment, children were introduced to German culture, anti-Semitism and the cult of Adolf Hitler.

The American writer Bess Wohl tells all this in the form of a holiday romance between a penetrating Aryan youth and a clumsy young woman with a passion for Latin poetry. 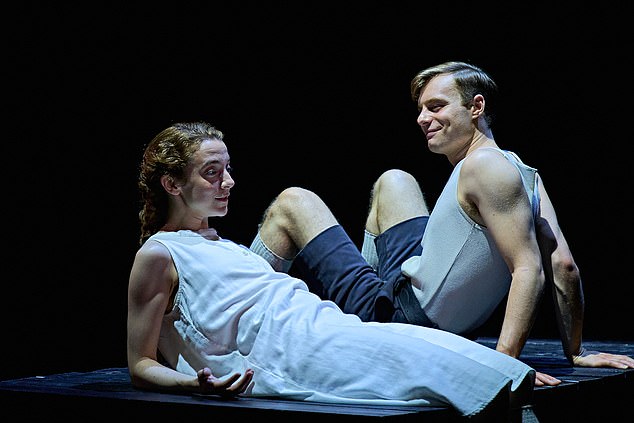 Bond: Patsy Ferran and Luke Thallon at Camp Siegfried in The Old Vic

He thinks he’s doing her a favor when he picks her up at a camp dance, but he’s soon head over heels when they bond as they chop, brick, and chat around a bonfire.

She becomes pregnant – shockingly – but then really surprises him with a Nuremberg Rally-style speech on the “German Day” of the camp.

Wohl’s message is that humans have an infinite capacity for self-deception that can easily spiral out of control; and we must all examine our consciences, lest we also be carried away. More interesting than that, though, are her two young characters, with whom we form an uneasy bond—the idealism of their childhood that makes them seem both sympathetic and vulnerable.

Katy Rudd’s spartan production is set against a high fence of reclaimed wood planks, reminiscent of a nearby forest. It has the eerie effect of making the story feel like a fairy tale. . . maybe Hansel and Gretel.

As a young woman, Patsy Ferran is particularly hypnotic. Her 16-year-old character, who has already had an affair with an older man, has a strangely distant worldview (she likens sex to ‘cleaning your ears’).

Luke Thallon is a cheerful young conformist who flexes his muscles with a clear smile.

And despite the heat, there’s an edge to their budding romance (he calls her “dummy”; she lets it go quietly).

It is a small-scale yarn for such a large hall; and in some ways it’s just a few character sketches. But beware: it is steadily growing and filling the theater.