Osteopath: The Two Very Simple Tricks You Need To Know To Relieve Hip And Back Pain In SECONDS After Sitting At A Desk

An osteopath has shared two simple tricks that he says can relieve back and hip pain in seconds — without consulting a doctor.

Brendon Talbot, a Canadian health expert who specializes in bone and muscle tissue, says you can immediately reduce the tightness by sitting on the floor with your legs stretched out in front of you, then opening and closing them as you move them a few inches. off the ground.

In a now viral TikTok video, the osteopath also recommends lying on the floor with your legs pressed against a wall, then bending them inward before gently opening them as far as possible.

According to Mr. Talbot, the stretches not only reduce pain but also improve balance and strength in a wide variety of activities, including running, walking, squatting and lifting weights.

The medical expert warned that pelvic pain and stiffness can be exacerbated by sitting at a desk and working on a computer for long hours. 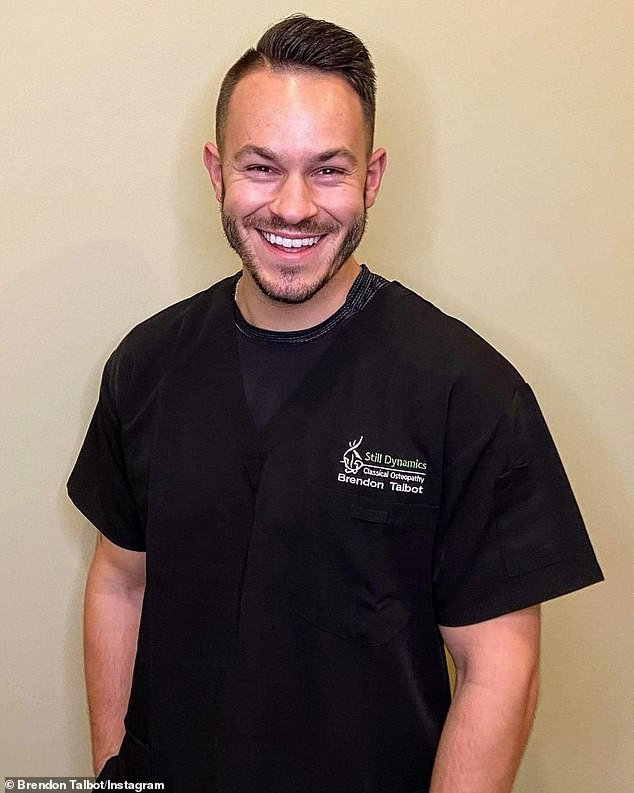 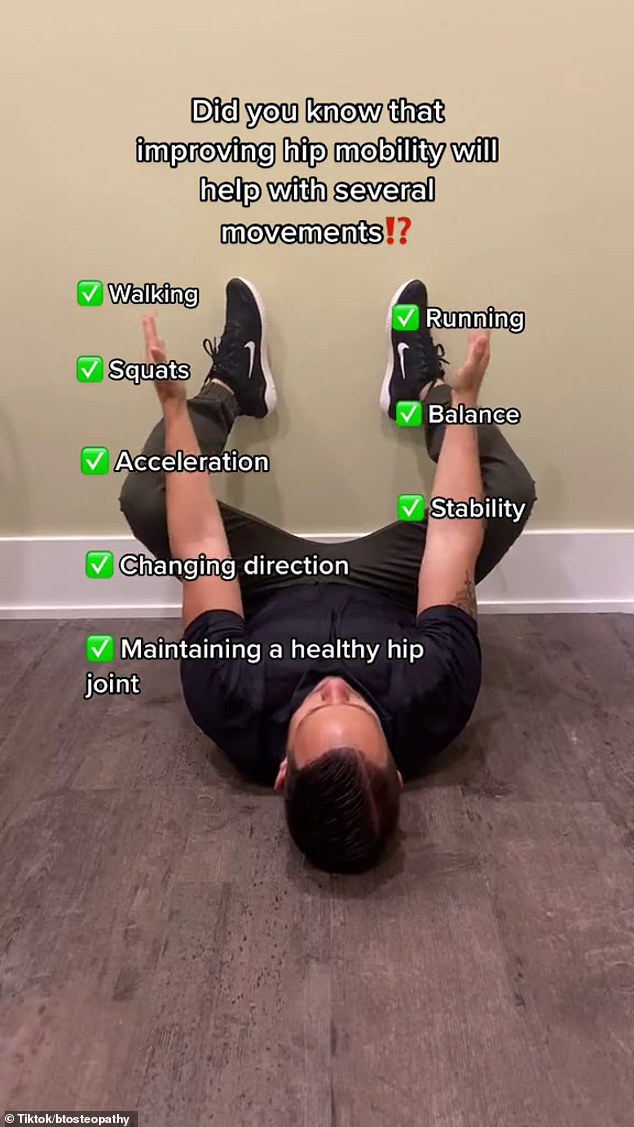 In a now viral TikTok video, the osteopath recommends lying on the floor with your legs pressed against a wall, then bending them inward before gently opening them as far as possible.

Talbot’s simple tips, which have racked up over 1 million views since its July 22 upload, sparked hundreds of appreciative comments from viewers who claim he changed their lives.

‘Thank you for making this video, I need this! I have already added so many of your suggestions and they help me immensely,” one woman wrote.

Another said, ‘Oh my god I NEED these, I can’t thank you enough!’ 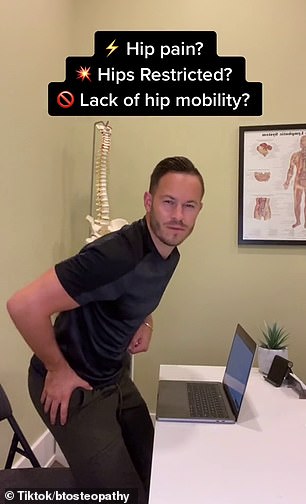 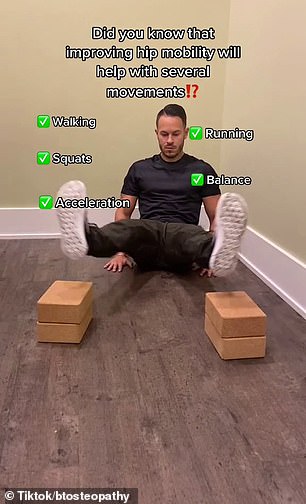 Mr Talbot (pictured) says you can immediately relieve the tightness by sitting on the floor with your legs stretched out in front of you, then opening and closing them while holding them a few inches off the floor

Others joked that they are so stiff that they could never perform the moves without breaking something.

“If I had to do that, I’d be on the floor,” one man wrote, while a second said, “Maybe you should help me up after that.”

Earlier this month, the osteopath sparked TikTok sensation with a simple trick to improve “head forward posture,” which is when a person’s head naturally leans forward, putting pressure on the neck and restricting blood flow to the brain.

The risky attitude is often exacerbated by the use of devices such as computers and smartphones. 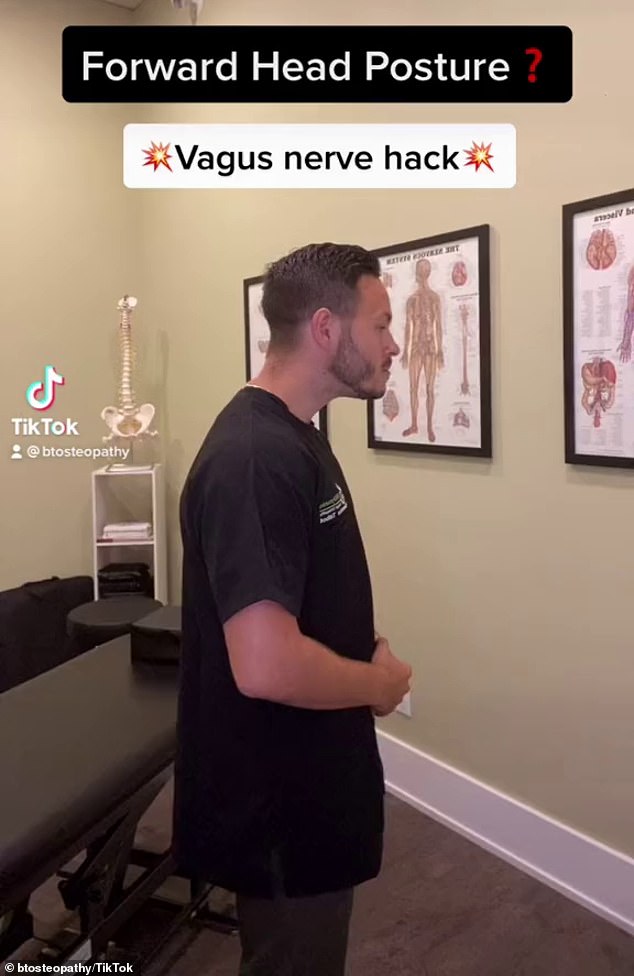 Mr Talbot (pictured) warns that ‘forward head posture’ can restrict blood flow to the brain, resulting in a host of serious health problems such as anxiety, depression and insomnia

What is the function of the vagus nerve?

The vagus nerve carries an extensive array of signals from the digestive system and organs to the brain and vice versa.

It is the longest and most complex of the brain’s 12 cranial nerves, extending from its origin in the brainstem through the neck and chest to the stomach.

The vagus nerve plays a role in the most important functions of the body, including breathing, speech, digestion, and taste.

Mr. Talbot says that performing a ‘trapezius twist’ every time you get up from sitting can alter your health by repairing the vagus nerve.

He claims that the movement — crossing your arms in front of your body and moving them back and forth, then over your head — changes muscle tone and opens the chest, leading to an immediate change in breathing and posture.

Prince William and Kate ‘normalize Prince Louis’ so he…

How do you get a Michelin star meal for HALF price?

Detective officer for Greater Manchester Police, 40, charged with a…

Boy, 11, dies after charging phone explodes during online class in…

Solskjaer rages over reaction to his suggestion Marcus Rashford should…

La Garrotxa: The Spanish region of 40 volcanic cones – and…

Boris unveils plan for Green Britain… but at what cost?