In India, a man has been killed after a monkey threw a brick at him from the second floor of a building.

Local police confirmed that 30-year-old Mohammad Kurbaan was killed yesterday after being hit in the head with a falling brick in the Nabi Karim area of ​​Central Delhi.

Kurbaan, who sold bags at a store in the area, collapsed after being hit with the brick and was taken to hospital, where doctors pronounced him dead.

A First Information Report (FIR) was handed over to an unknown person by police under sections of negligent death, the Indian Express reports. 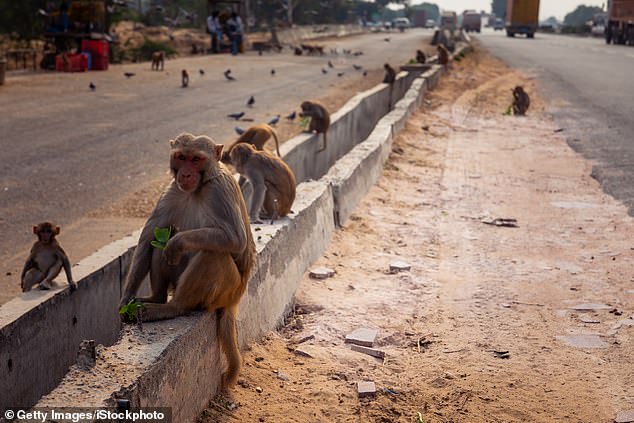 Local police confirmed that 30-year-old Mohammad Kurbaan was killed yesterday after being hit in the head by a brick thrown by a monkey in the Nabi Karim area of ​​central Delhi. Pictured: Monkeys in India Stock Image

During the investigation, police discovered that the owner of the building from which the stones were thrown had left two stones above a water tank to prevent monkeys from opening it.

Police said a group of monkeys managed to remove both stones, throwing one at Kurbaan and another on a nearby terrace.

The incident comes after the wife of a leader of a major political party in India was killed while trying to escape a monkey attack.

Sushma Devi, 50, was rushed to hospital but sadly died of her injuries.

She is the wife of Anil Kumar Chauhan, leader of the Bharatiya Janata Party (BJP).

The incident took place on September 9 when she was attacked by aggressive monkeys on the terrace of her home in Kairana city.

To evade the attack, she jumped off the terrace.

Wild monkeys have wreaked havoc in the Shamli district of Uttar Pradesh in northern India, with local authorities cracking down. 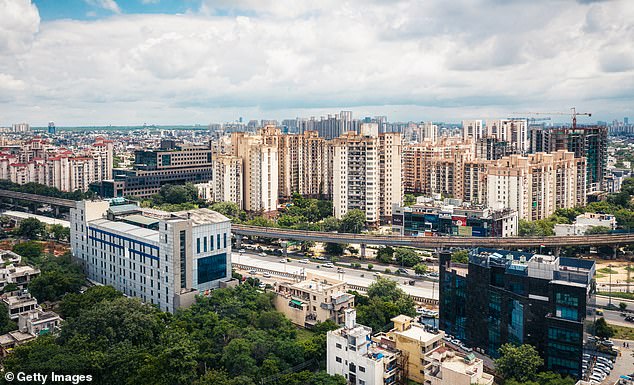 Kurbaan, who sold bags at a store in the area, collapsed after being hit with the brick and was taken to hospital, where doctors pronounced him dead. Pictured: New Delhi Stock Image

Municipality Commissioner Anunaya Jha for the city of Mathura said, “In the first phase of the program, monkeys would be captured from the Bankey Bihari temple area of ​​Vrindavan, Chaubia para and the Dwarkadhish temple area of ​​Mathura and they would be released into the forest areas.”

Local residents claim that there have also been daily monkey attacks on children.

Sushma was also a politician and was a member of the district panchayat, a district council in India.

She was cremated at Mayapur farm.

During the first attack, monkeys broke into a woman’s house while she was breastfeeding. Her child snatched the baby from her and bit him to death.

In the second attack, a 58-year-old woman was bitten by monkeys when she went to relieve herself outside her home on the outskirts of town and bled to death.

Monkeys have also accidentally caused death – in January last year, a woman who was hanging laundry on her roof died after monkeys attacked and she slipped and fell.

Elderly man chokes to death in his dentures after robber punches…