Wisconsin police have released dramatic body and dash cam images documenting a recent shooting in which they say an armed felon was killed after opening fire on an officer, leaving him critically injured in a chase.

Greenfield Police on Thursday released edited footage from the August 22 incident that resulted in the death of 31-year-old Tyran Lamb.

The video shows Lamb, who was an ex-con, fleeing from police after running a red light, crashing into another vehicle, ignoring multiple surrender commands, and then a male officer through the windshield shot from close range . 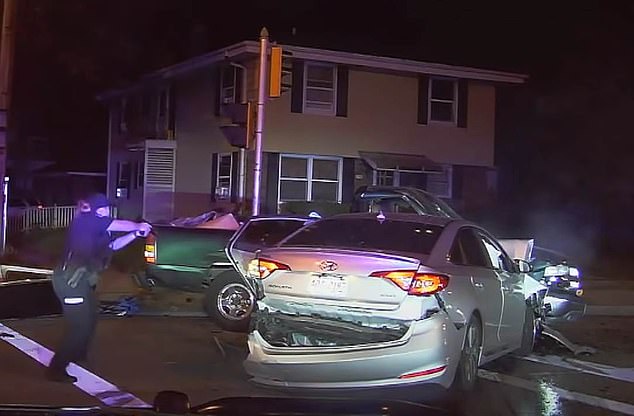 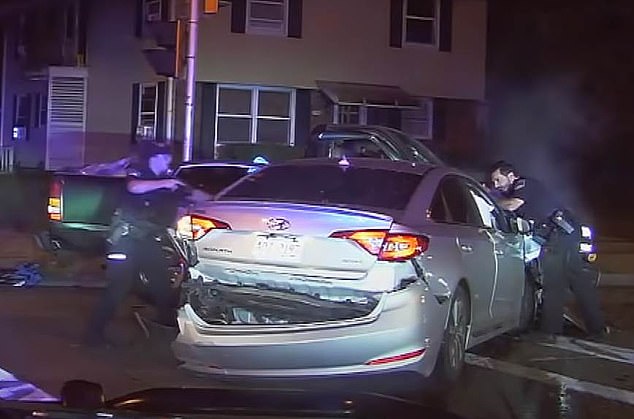 Police surrounded Tyran Lamb’s silver Hyundai after he fled a traffic stop, gave chase and collided with another vehicle 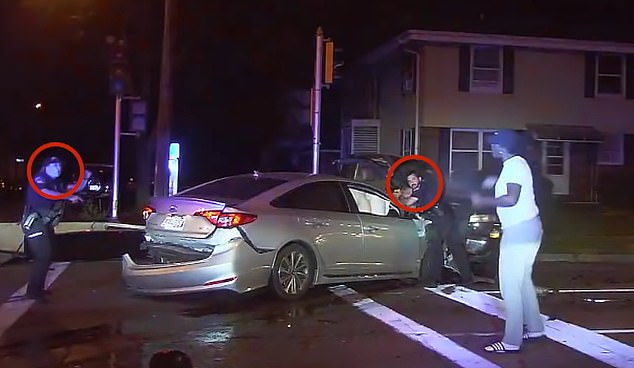 During the stalemate, a bystander tried to intervene, distracting the police 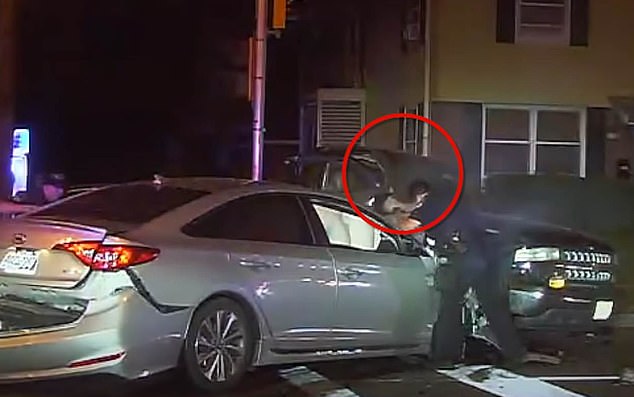 Lamb, a father of three, tried to flee on foot but was fatally shot by police.

The injured officer survived, thanks in part to the life-saving efforts of his colleague, as can be seen in the body-camera graphic footage. 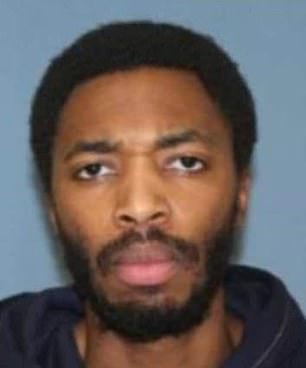 Lamb, 31, was under active community surveillance and banned from possessing a gun because he was a convicted felon

Police said the incident began shortly after 1:30 a.m. on Aug. 22 when a Greenfield police officer saw Lamb run a red light. The officer, referred to as “Officer 1” in the video, stopped at a traffic stop on South 35th Street and West Oklahoma Avenue.

Police used nail strips to stop Lamb, but he continued to flee until he hit another driver on South 27th Street and West Becher Street, leaving her with a broken vertebra.

The recently released bodycam and dashcam footage shows Officer 1 running to Lamb’s mangled car with his gun drawn and yelling at him, “Show me your hands right f***ing now!”

According to Greenfield Police Chief Jay Johnson, the suspect refused to show the officers his hands, despite being ordered 18 times.

Amid the tense standoff, a bystander appears and appears to attempt to intervene, causing police officers to briefly divert their attention from Lamb. 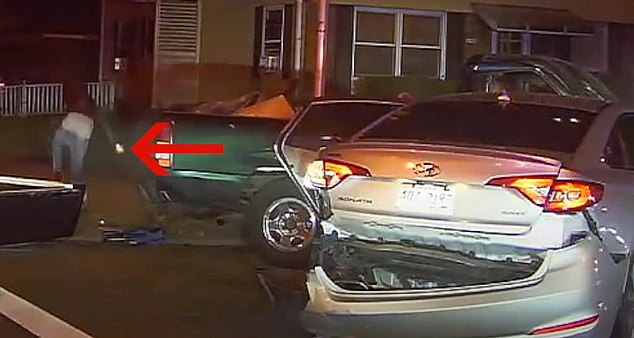 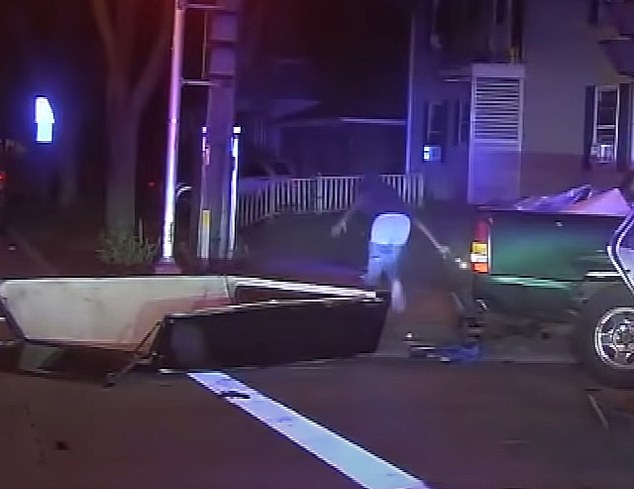 Agent 1 goes to the windshield to try to see both hands of the suspect, after which Lamb opens fire and shoots the male agent several times.

The officer falls backwards and takes cover behind a police car. He yells, ‘shot fired! I am hit!’

A backup officer fires at Lamb as he gets out of his car and flees on foot. During his flight, he jumps over the wounded officer and shoots him at close range.

Lamb collapsed a short distance away and was pronounced dead at the scene a short time later.

“Please don’t make me die, I beg you,” the injured officer begs his colleague as she applies a tourniquet to his blood-soaked leg.

The injured officer says he was hit in the leg, chest and hand. He tells his colleague that he is having trouble breathing.

Chief Johnson praised the young backup officer for saving the life of her badly injured colleague.

The 36-year-old officer with three years of experience was hospitalized in a critical but stable condition. He has since returned home and is expected to make a full recovery.

At the time of the shooting, Lamb was under community surveillance as a result of two previous convictions for fleeing officers. As a criminal he was not allowed to be in possession of a weapon.

“The suspect was an armed felon who made the decision to run from the police,” Johnson said. “He endangered our community, our citizens and our officers.”

Court records show that Lamb, of Milwaukee, was convicted of armed robbery in 2014 and sentenced to three years in prison.

Shortly after his release, Lamb reoffended and was convicted of fleeing from a police officer, earning him a year in prison. 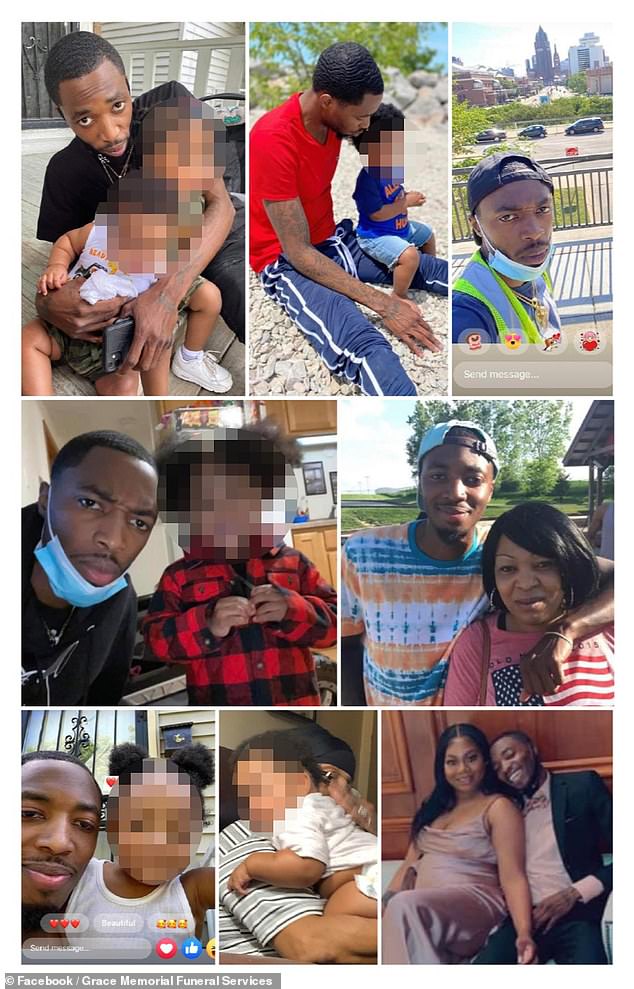 Lamb’s loved ones said he was a family man who lived for his two children. His girlfriend is currently pregnant with their third

Lamb was back behind bars in 2019 after he was again found guilty of evading an officer and was sentenced to a year in prison, followed by a year of community surveillance.

In the wake of the deadly shooting involving officers, Lamb’s family called the police to tell them what had led to the shooting.

Prior to the release of the body camera video, Lamb’s mother, Tahnisha Lamb, argued in an interview with WISN that her son did not shoot a cop.

She acknowledged that her son had previously run afoul of the law, but insisted that he turn his life around for the sake of his two children. His girlfriend is currently pregnant with their third.

“He loved his family,” Lamb’s mother said. “He loved his children and me and his grandmother. we were [sic] his world, his life, and they took him. They took his life.’

Greenfield Police said the incident is still under investigation.