A mother has been accused of teaching her daughters to be gold miners after admitting that she will tell them to consider a partner’s financial situation and not just marry for love.

The anonymous British woman, 43, said she thinks people with more money have fewer problems and their relationships are less strained than those who don’t earn as much.

To Mumsnet, she explained that her own mother told her money doesn’t matter when you’re in love, but she disagrees because couples who are struggling financially can’t hire anyone to do tedious chores and have less freedom.

She added that the people in her friendship group who chose a partner with money have “the much better deal” now that they are in their 40s, she said she will advise her daughters to consider wealth or earning potential.

While some commentators agreed with the mother that “love is not enough,” others said it was sexist and “no better than a man who chooses a woman who is good at housework.” 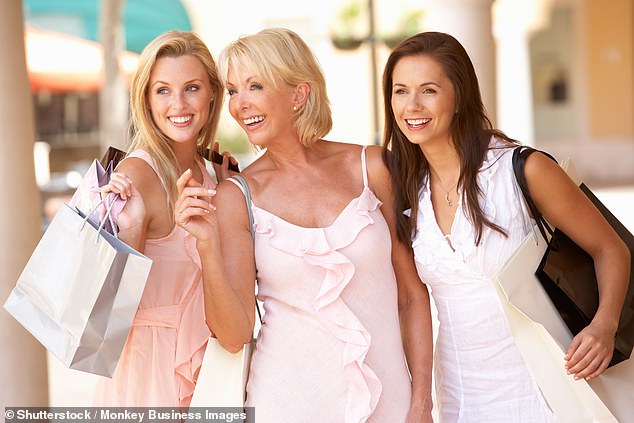 The woman explained that although her mother believed you should marry for love, she was lucky enough to fall for a man who was a surgeon when she was a young nurse.

But she said she’s seen for herself how things have turned out for friends who valued love over money.

“I’m 43 now and the life choices friends have made are all coming out.

“The reality seems that those of us who have chosen to spend our lives with men and women with money have by far the better deal,” she said. 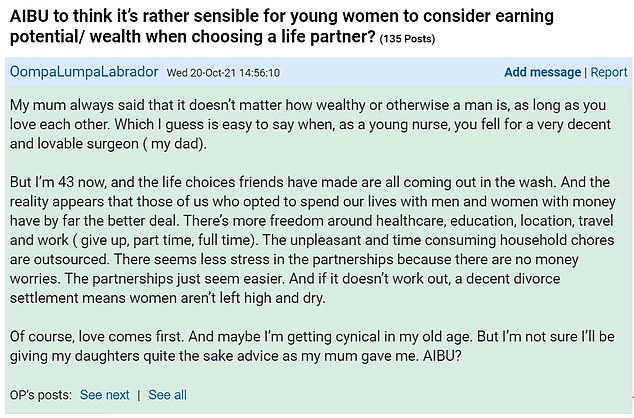 “There’s more freedom around healthcare, education, location, travel and work (give up, part-time, full-time),” she added.

She went on to say that wealthy couples can hire someone to do tedious and time-consuming household chores, which in turn means the partnerships “just seem easier.”

“There seems to be less stress in the partnerships because there are no money worries,” she added.

And she pointed out that if the marriage doesn’t work out, choosing a partner who is financially secure means a better divorce settlement.

Some people agreed with her, including some who were married for love and left high and dry.

‘I agree with that. I married for love and then had children with someone I was madly in love with. I got a royal f***** both times and now I’m struggling to make ends meet,” one said.

“Love is not enough. It really isn’t. I will tell my daughter to think long and hard before choosing a mate. My earning potential doesn’t mean I have to squat looking after two small children without a single family member or friend around,” she added.

“Of course it’s worth considering, and anyone who doesn’t think about it is rather short-sighted. Saying that isn’t the same as saying ‘you should deliberately marry a rich partner’, one argued.

“But aspirations, career goals, lifestyle goals, they’re all important things to consider when deciding to spend your life with someone, and different people will put different weight on different things,” she added.

“I’ll teach my daughter to think about her own income potential as I’ve been taught (I’m the main breadwinner in my relationship), but there’s nothing wrong with her having expectations about a partner’s earning potential,” said one woman. .

“I will encourage my daughter to think about her own earning potential and make sure she chooses a career that will allow her to maintain the standard of living she is accustomed to,” one explained.

“And yes, there are professions that I would advise her to think very carefully about because of the earning potential. I would recommend her to make sure that whatever she does, she always has a roof over her head and food on the table,” she added. 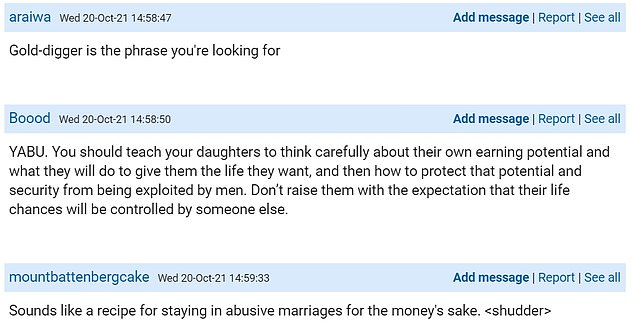 ‘I would also advise her to choose someone who wants to enjoy the same standard of living as she does (dining out, nice house, travelling, nice car, possibly domestic help) and who can afford it. I wouldn’t want her looking for a wealthy partner in particular, but I think a financial equal is at least a priority,” they continued.

However, some people disagreed with this view of the world, saying that the woman would turn her daughter into “gold diggers.”

“Gold-digger is the phrase you’re looking for,” one said to her.

“You have to teach your daughters to think carefully about their own income potential and what they will do to give them the life they want and how to protect that potential and that security from exploitation by men,” said one.

“Don’t raise them with the expectation that their life chances will be controlled by someone else,” she added.

“Sounds like a recipe for staying in abusive marriages for the sake of money,” said one.

‘This is no better than a man who chooses a woman who is good at the household. It sucks,” someone argued

One person who was marred by love strongly disagreed: “I’m married to someone I love more than anything else. He has a minimum wage job, will probably never work but on a production line,” they said.

‘I don’t care for a moment. We just about made it, and although we’ll never own a house, go on luxury vacations, etc., we’ve built a wonderful marriage on love and respect for each other,” they added.

‘No more than advising young men to think about the earning potential of potential partners. The bottom line is that you optimize your own potential – not depend on anyone else,” said one.

“Well, I’m the big earner in my marriage. My husband is completely passionate about his job which means he is happy and fulfilled and interesting and interested in life. He probably finds my stress level a little frustrating, but he likes the cleaner, the house, the holidays, etc,” said one.

“I think we would still be happy if I made less money. He is not materialistic at all. I am, but that’s why I deserve – I wouldn’t like to be the least earner, because then I would lose power,” they admitted.

Foodies Are Losing It Over These GIANT Mediterranean Breakfast Bowls