Sabrina Percy looked every inch the blushing bride as she tied the knot to fiancé Phineas Page at Chelsea Old Church, London this afternoon.

The illustrator and model, 29 – who is a distant relation of the Duke of Northumberland and his daughter, Hogwarts heiress Lady Melissa Percy – opted for an elegant lace square neck dress with puff sleeve detail, believed to be a Dolce & Gabbana design.

To complete her stunning gown, Sabrina dazzled in a diamond necklace, earrings and sparkling headband, and was seen clutching a cream, white and green bouquet. 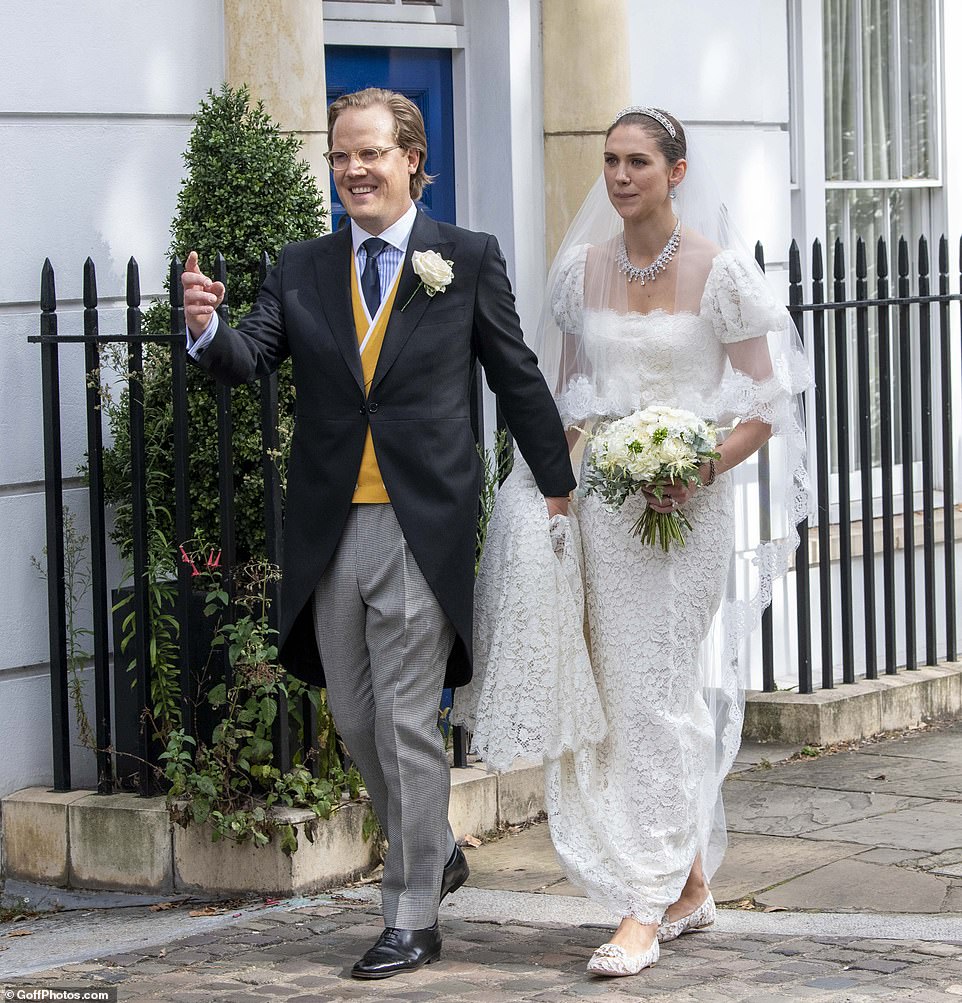 Sabrina Percy, 29, looked every inch the blushing bride as she tied the knot to fiancé Phineas Page at Chelsea Old Church, London this afternoon 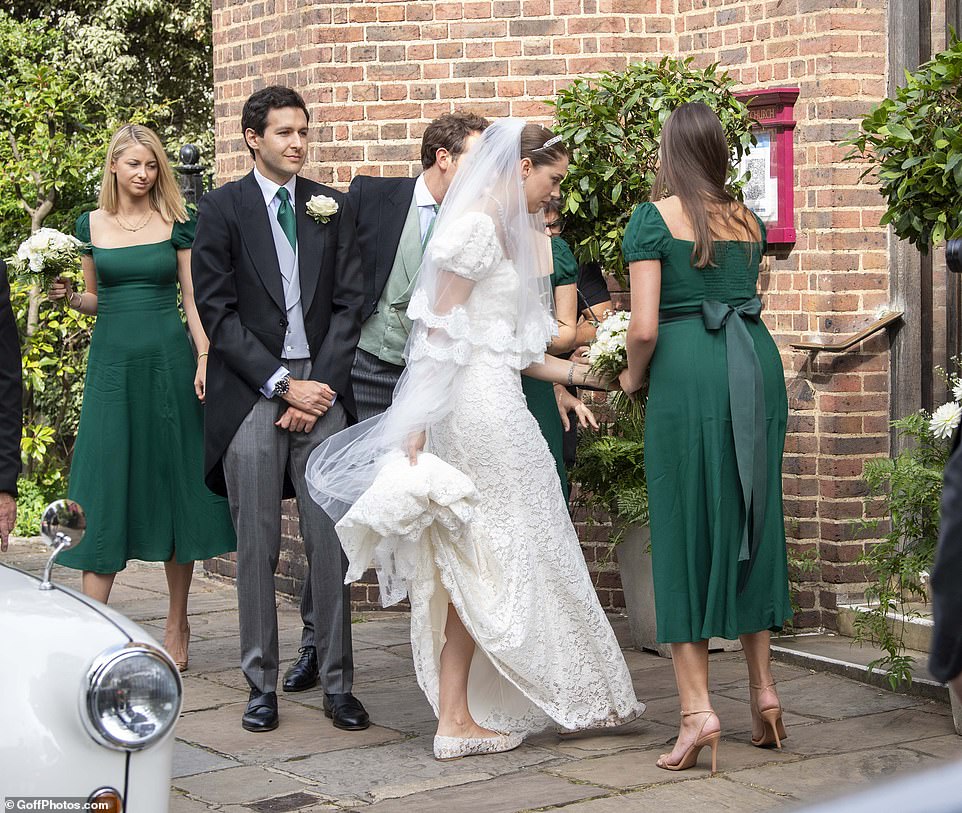 Sabrina Percy, who wore a pair of flat lace dolly shoes underneath her dress, had a helping hand from bridesmaid Amber Le Bon (pictured, together) 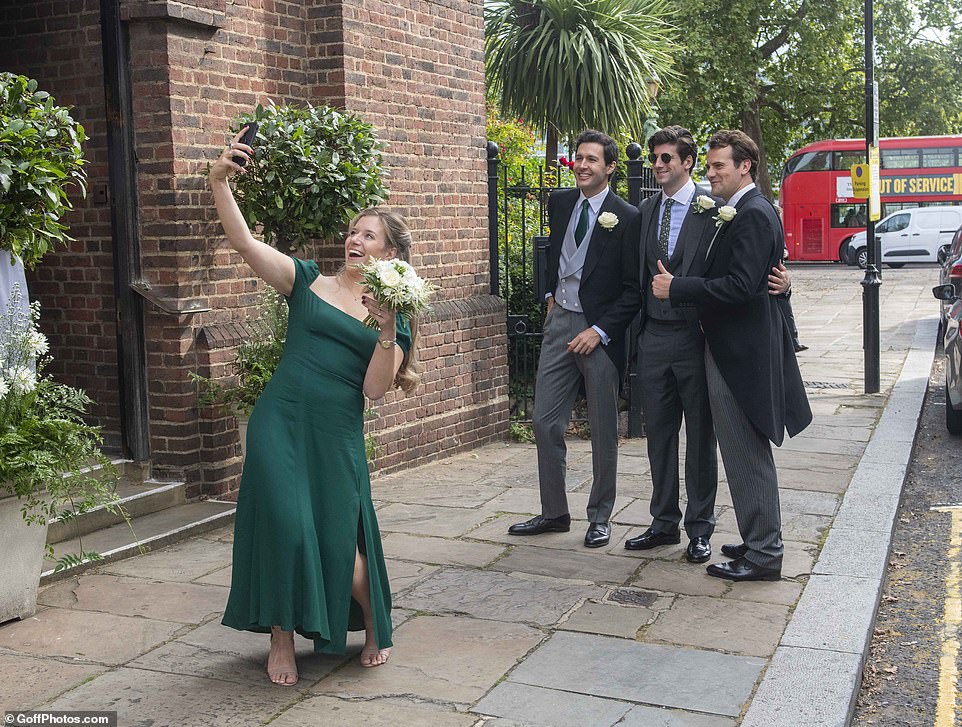 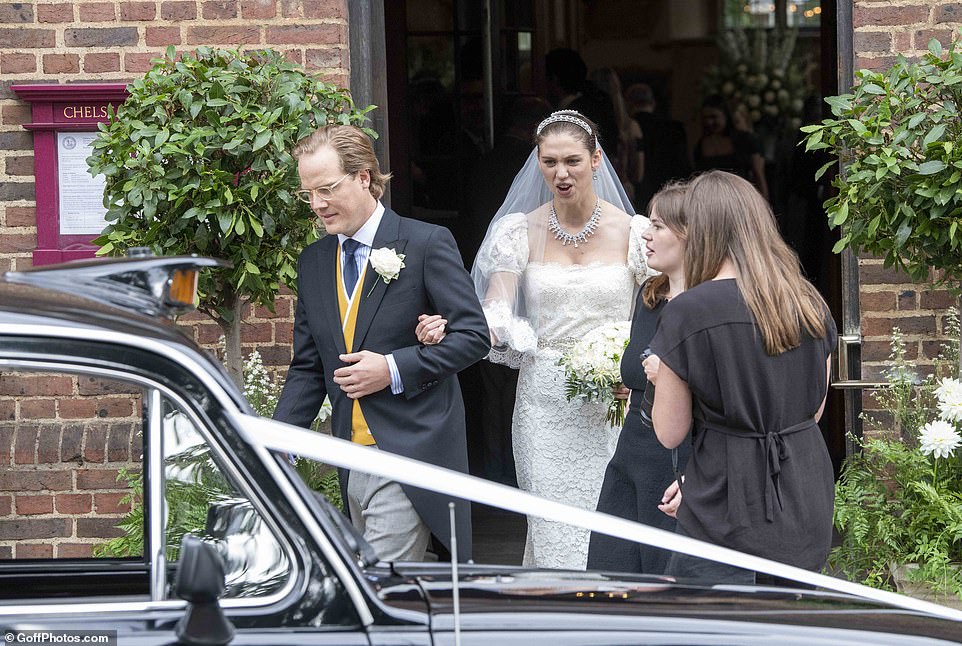 The bridesmaids – who included Sabrina’s close friends Amber Le Bon – daughter of Yasmin and Simon – looked in high spirits as they arrived at the venue in floor-length emerald gowns which featured slit detail.

They paired the square-neck dresses with different choices of open-toe beige sandals, adding their own unique touch to their outfits.

One bridesmaid was even captured taking a distanced selfie as guests and groomsmen posed in the background.

After the couple exchanged vows, they could be seen leaving the venue arm-in-arm, before being whisked off in a chic white taxi, complete with white ribbon to signify they had just got married. 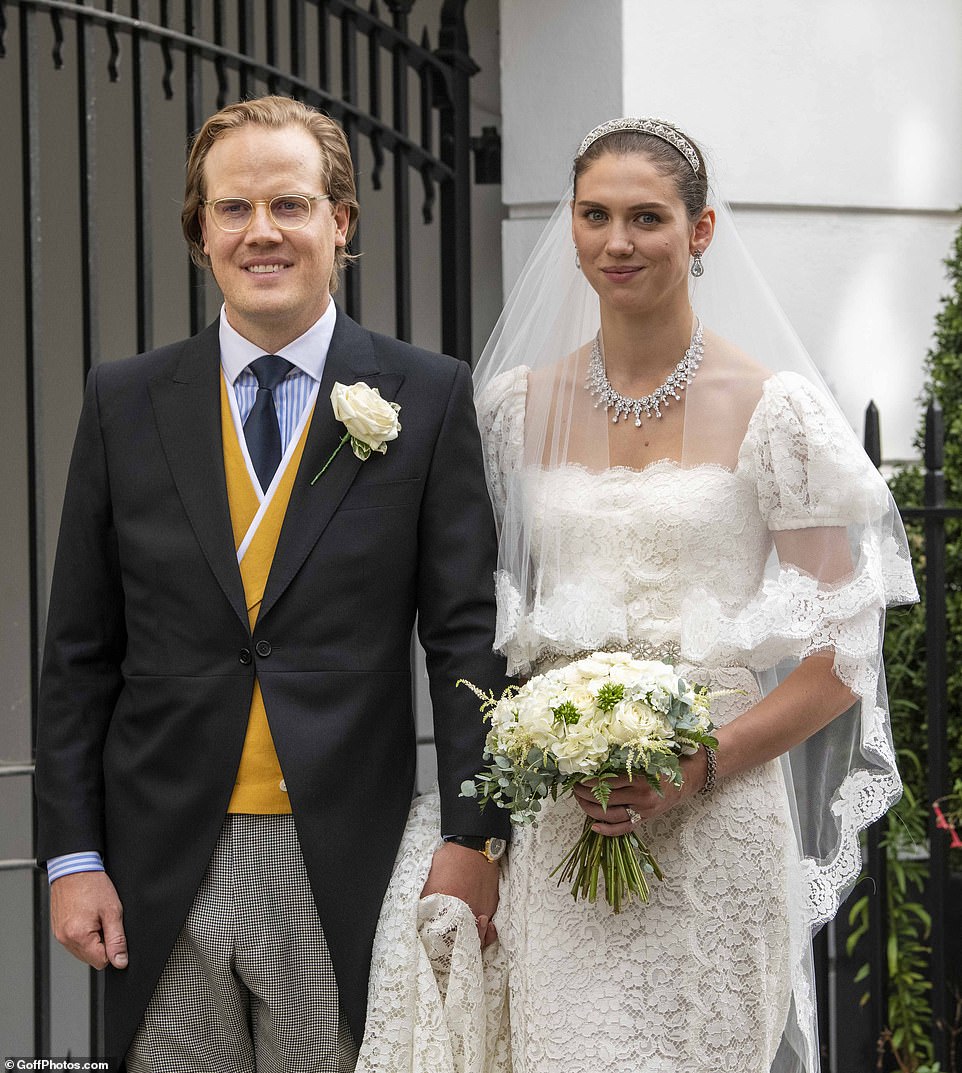 The illustrator opted for an elegant lace square neck dress with puff sleeve detail, believed to be a D&G design. Pictured, with Phineas 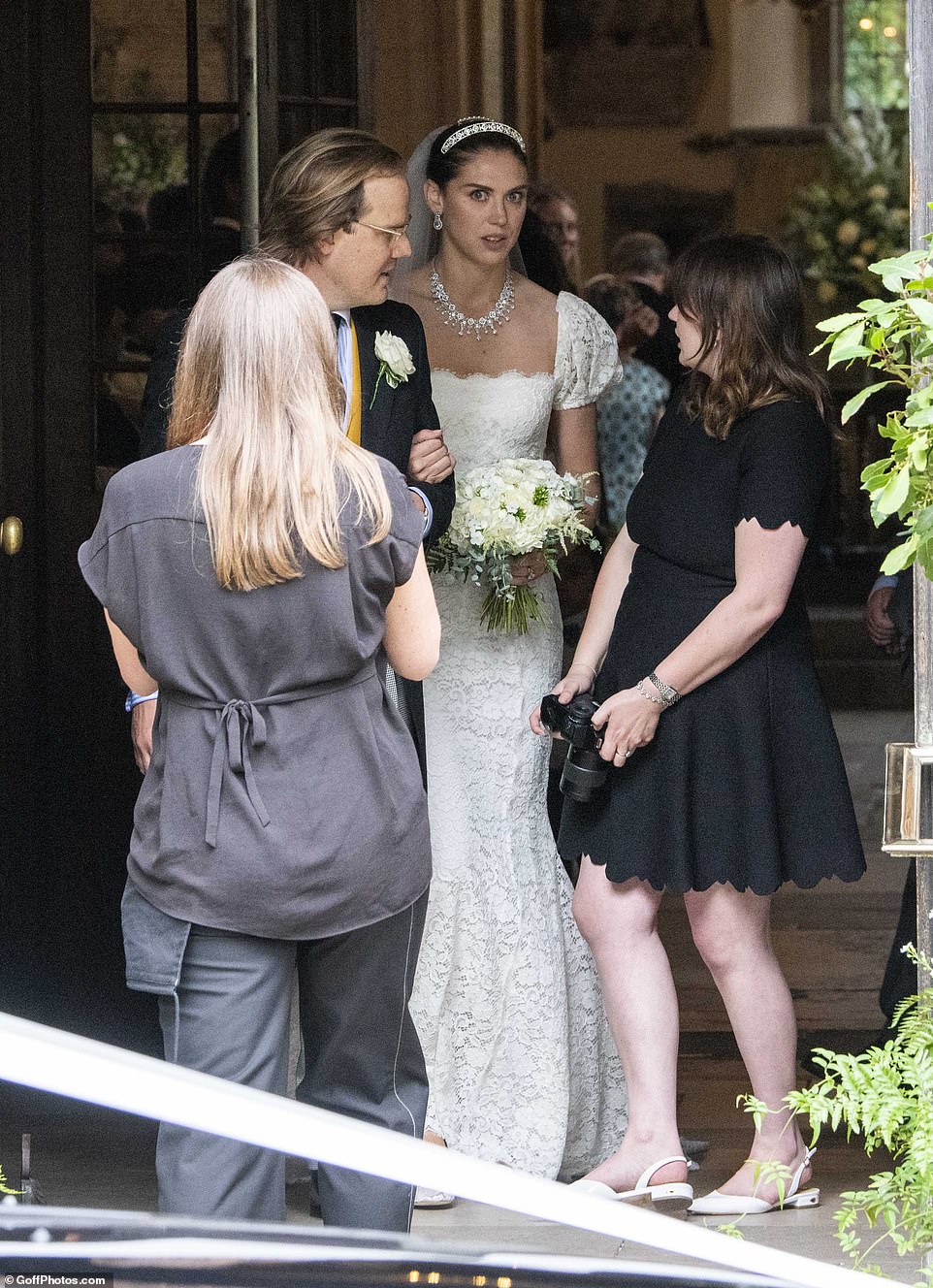 After the happy couple exchanged vows, they could be seen leaving the venue arm-in-arm (pictured) 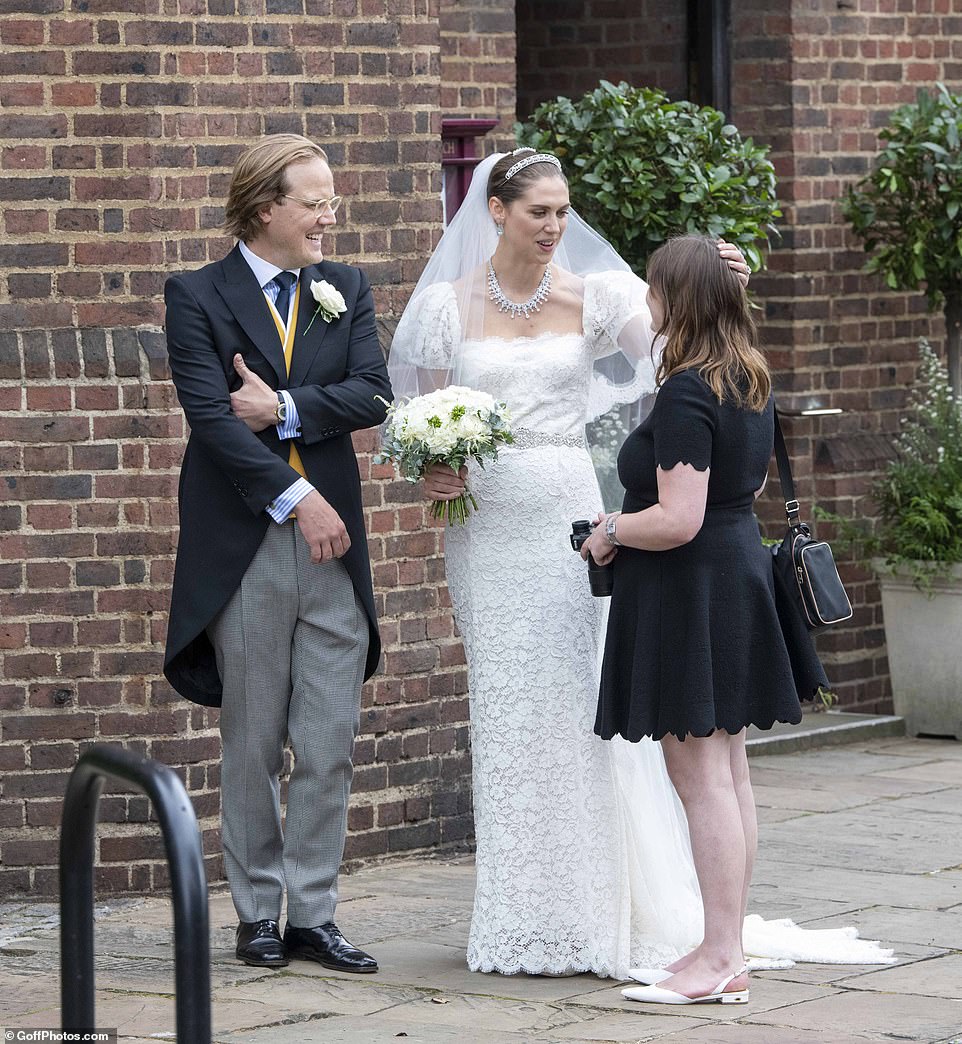 To complete her elegant gown, Sabrina (pictured, talking to a guest) dazzled in a diamond necklace, earrings and sparkling headband as she clutched a cream, white and green bouquet 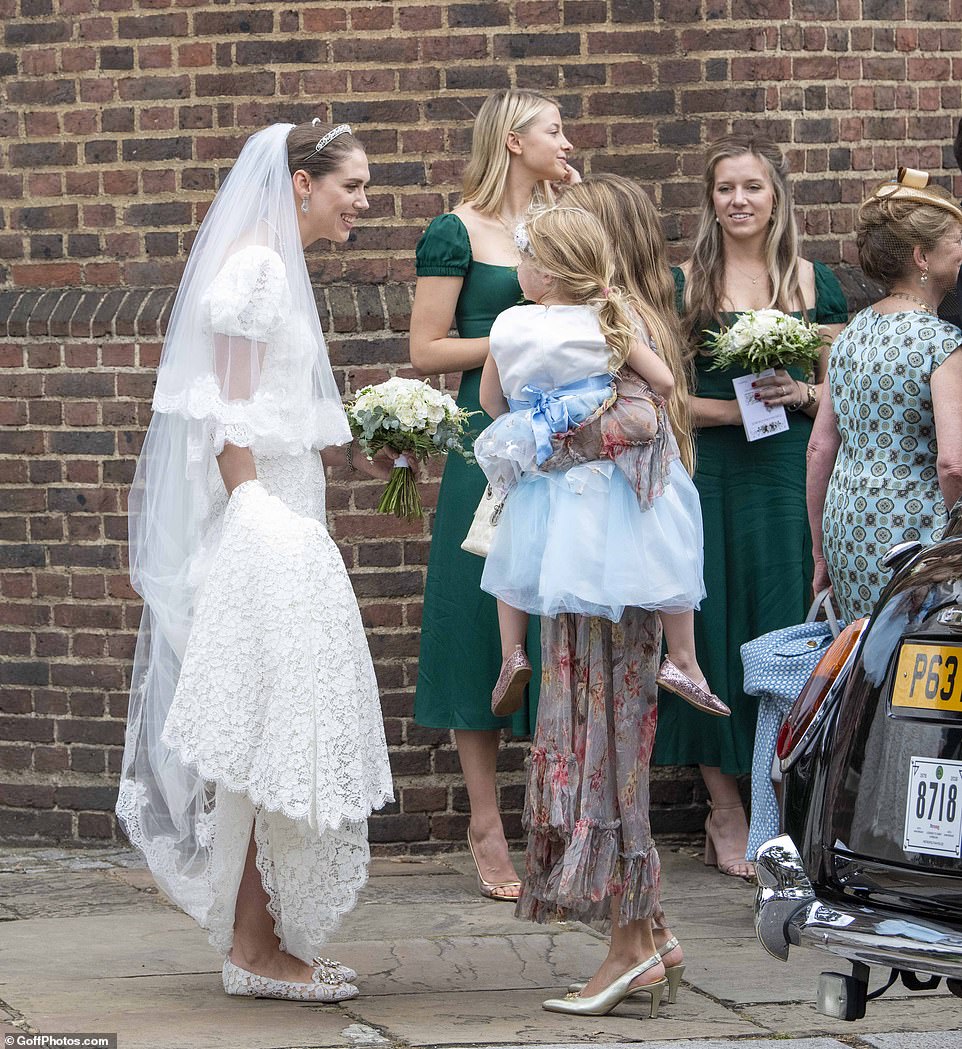 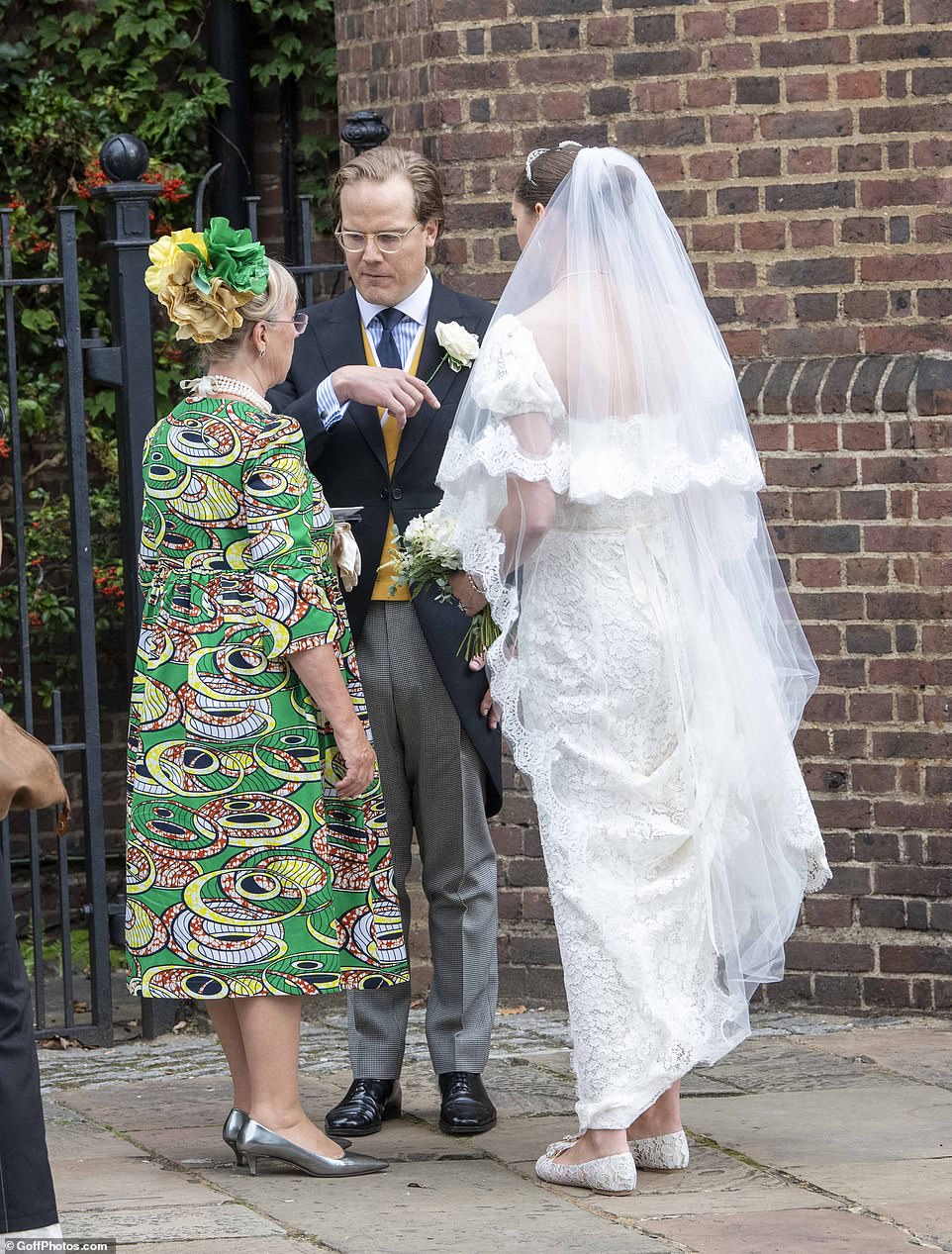 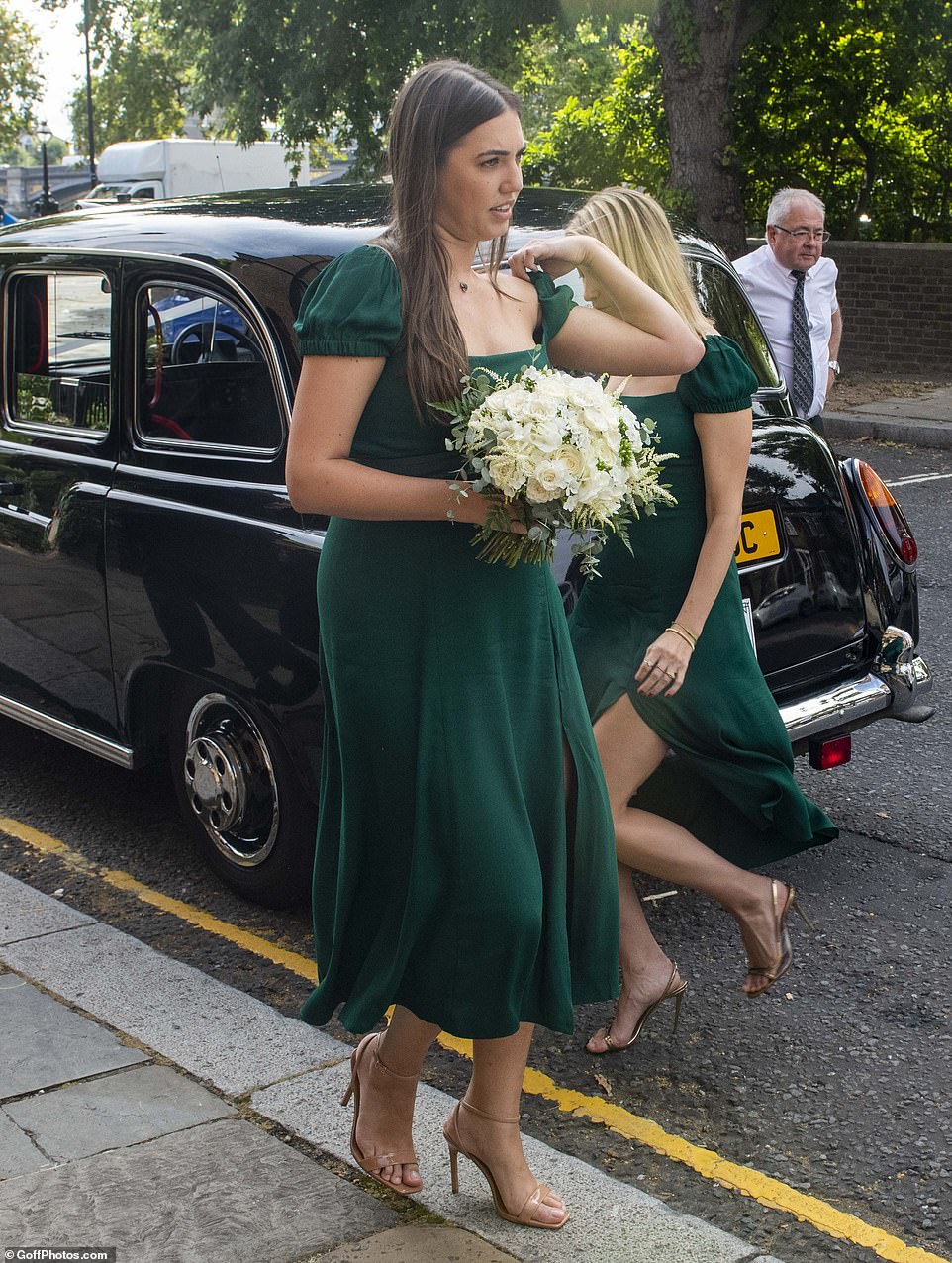 The bridesmaids paired the square-neck dresses with different choices of open-toe sandals to add their own unique touch to their outfit. Pictured, Amber Le Bon

The couple’s special day comes after they celebrated their engagement party in London in March, where Sabrina was the belle of the ball in her £3,300 frothy pink boudoir-inspired dress by Dolce & Gabbana.

Sabrina and Phineas were joined by a gaggle of glamorous friends for the festivities at Chelsea’s No. Fifty Cheyne.

The restaurant, which offers up high-end comfort food, opened last year and has fast become a favourite of London’s young society set. 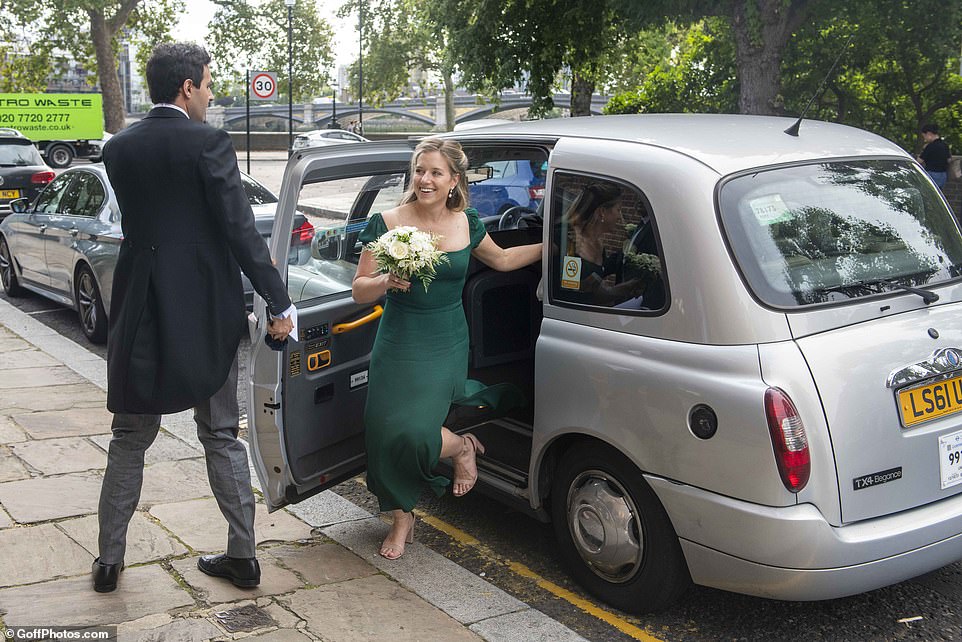 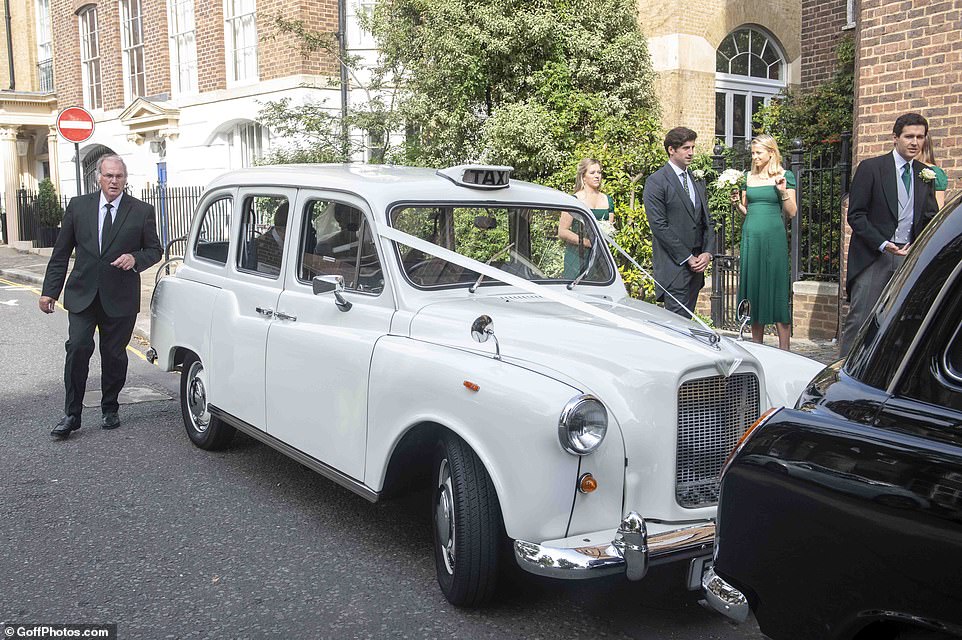 The newlyweds were whisked off into a chic white taxi, complete with white ribbon to signify they had just go married (pictured) 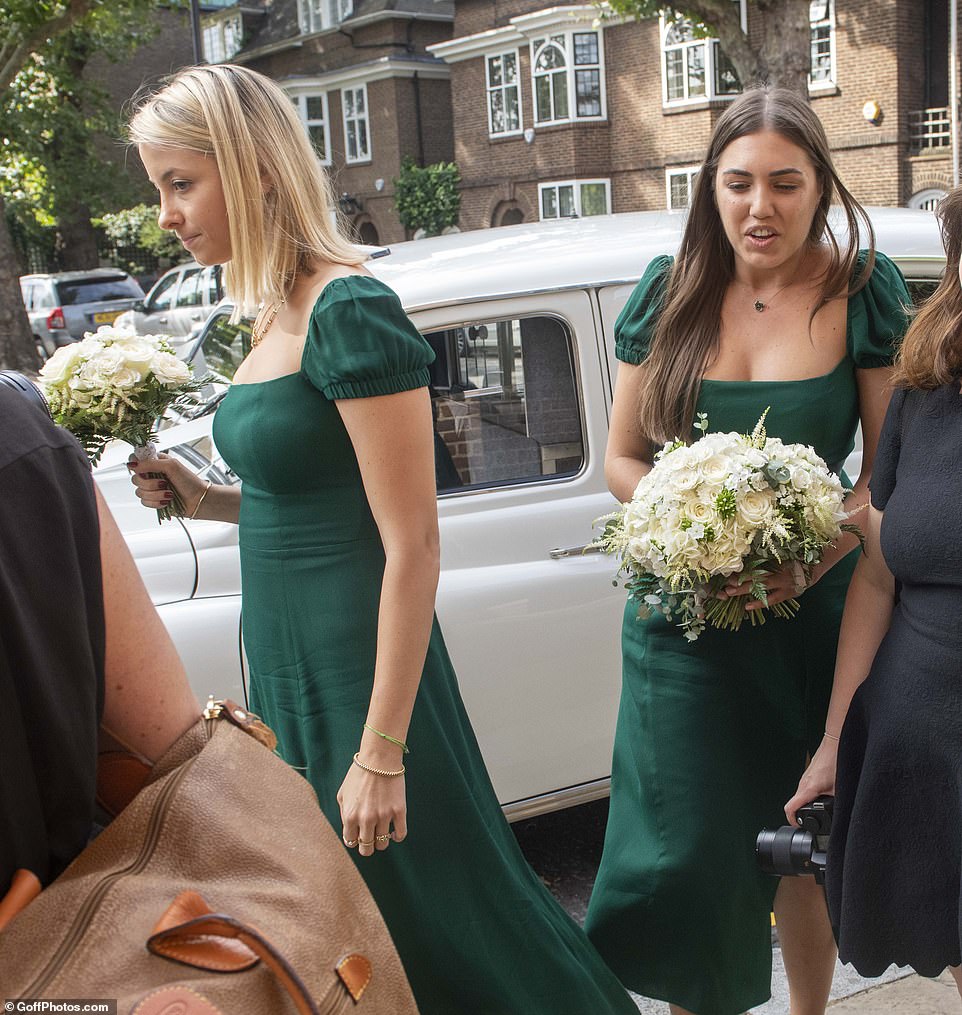 Natural beauty Amber Le Bon was all smiles as she fulfilled her role of bridesmaid for the day (pictured, left and right) 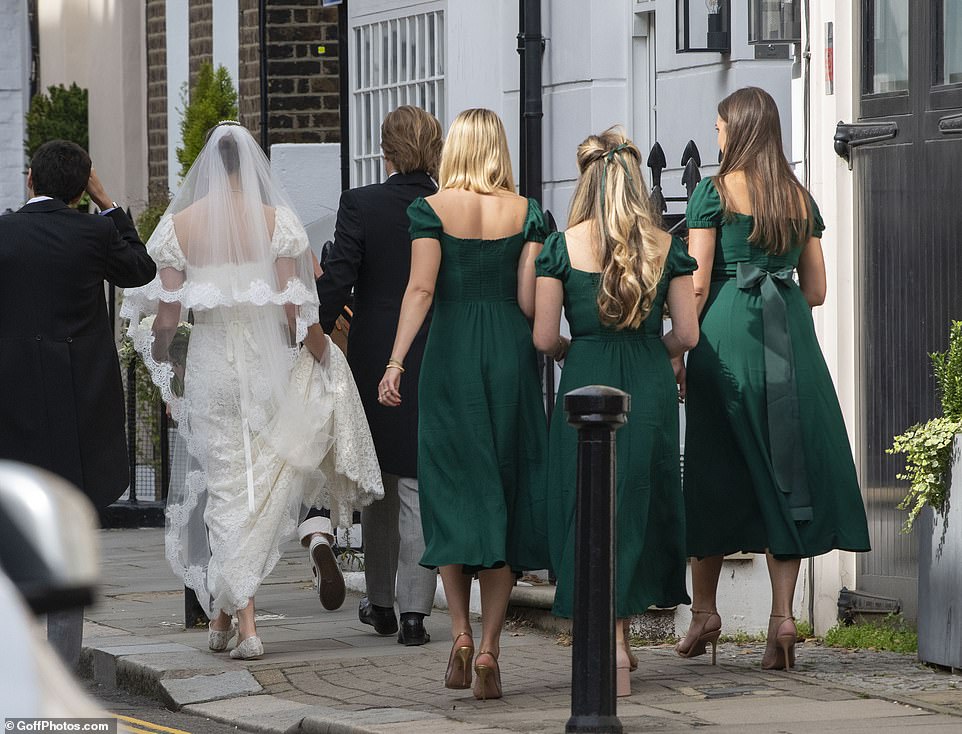 Sabrina, who was seen strolling alongside her husband, showed off her stunning veil which featured lace detail 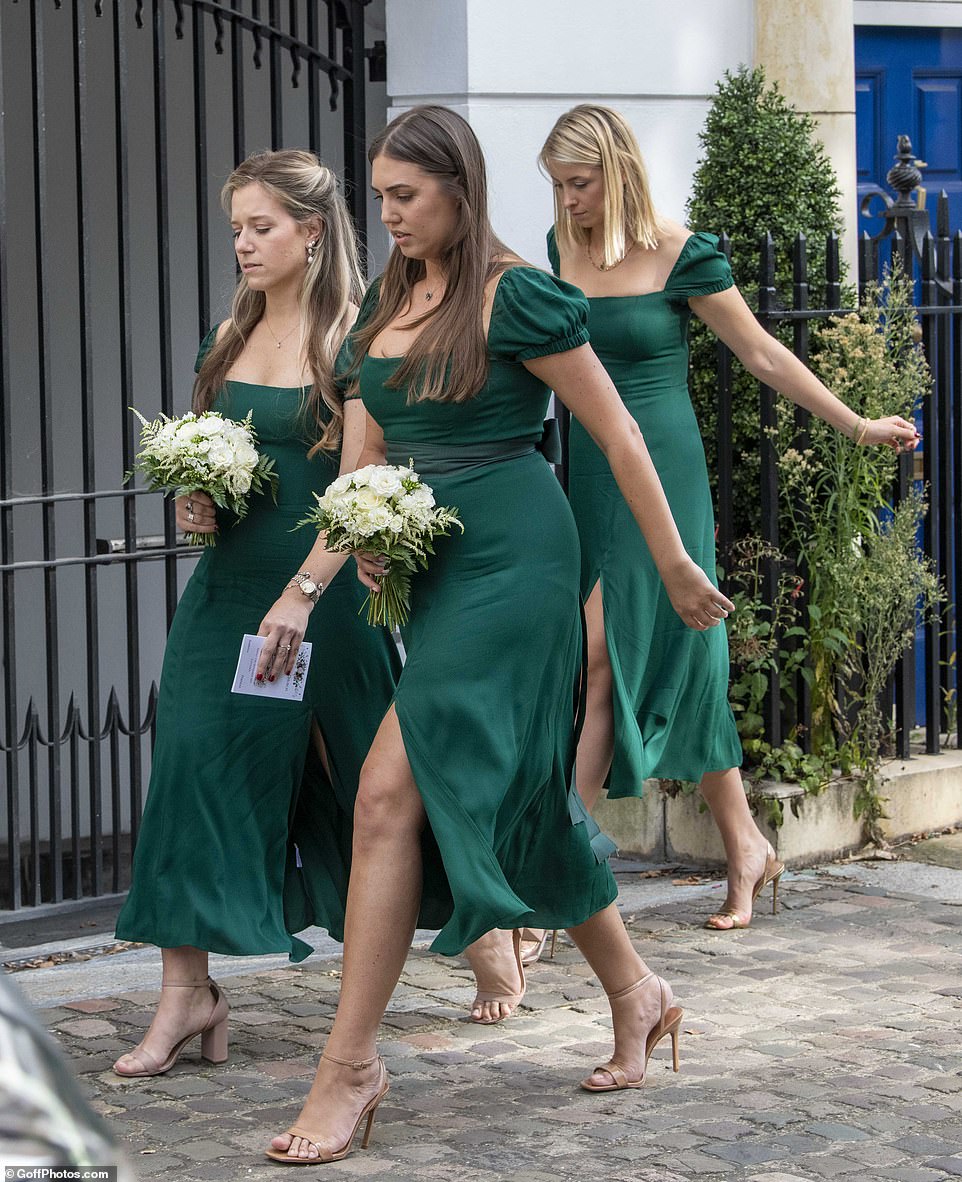 The bridesmaids, who opted for natural makeup, all accessorised with open-toe beige sandals

The brunette beauty, who has modelled for the Italian fashion label on a number of occasions, took to Instagram to thank the designers for the ‘incredible piece’, calling it the ‘dress of her dreams’.

It appears the label was also behind the dazzling necklace and chandelier earrings worn by the bride-to-be, who added a thanks for the ‘jaw-dropping jewellery set that came with it [the dress]’.

Despite being blue-blooded through and through – the Percys’ ancestral seat is Northumberland Castle, where Harry Potter was filmed – Sabrina is known for being down-to-earth and used to pull pints in a Chelsea pub in order to pay her way through college.

She went on to study at the London College of Fashion and now juggles a career as an illustrator – her clients include lulemon and Rolls Royce, as well as society pals – with modelling gigs, namely for D&G.

Sabrina has also graced the cover of Tatler in addition to being named as one of the society bible’s ‘Babe of the Month’. 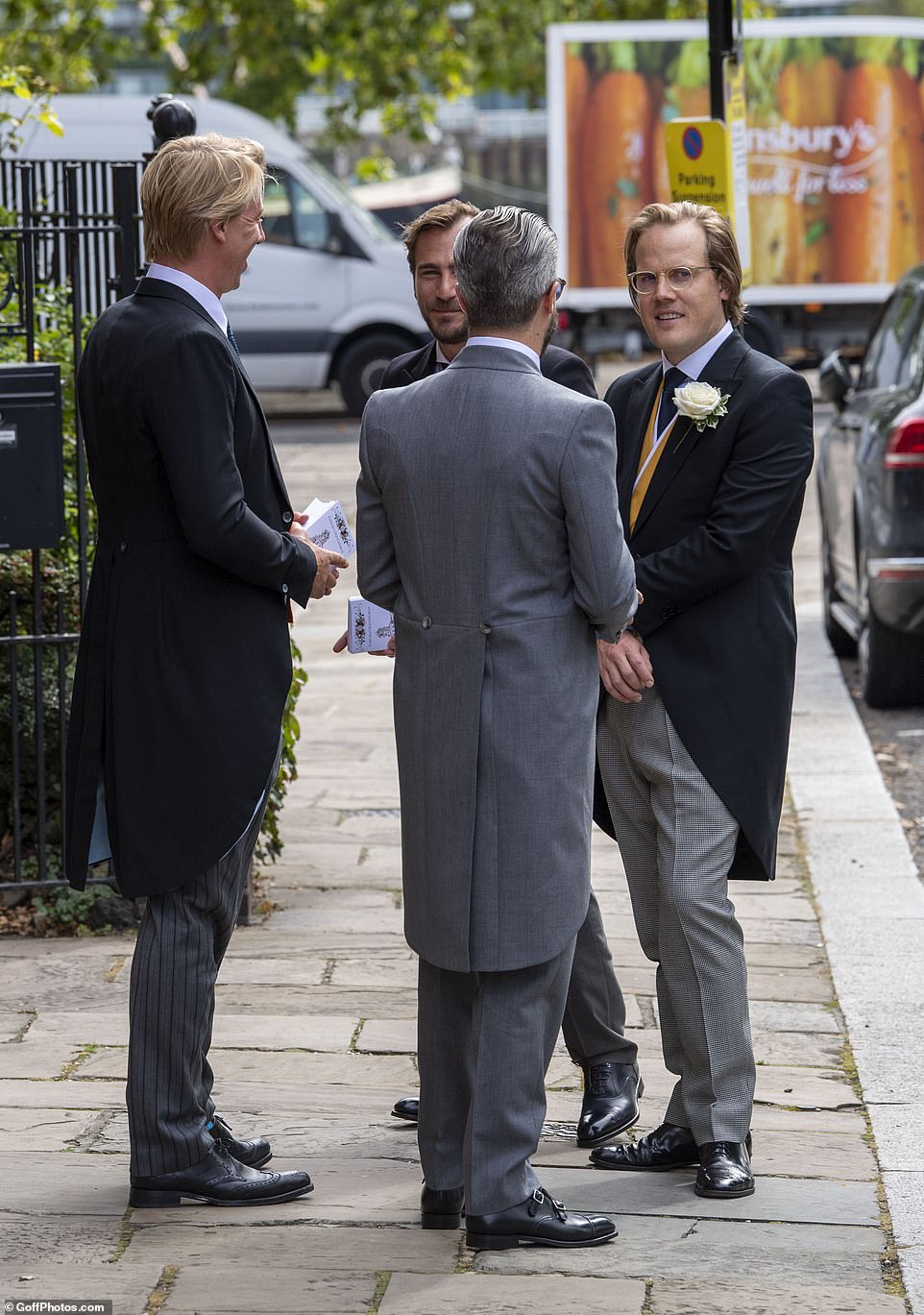 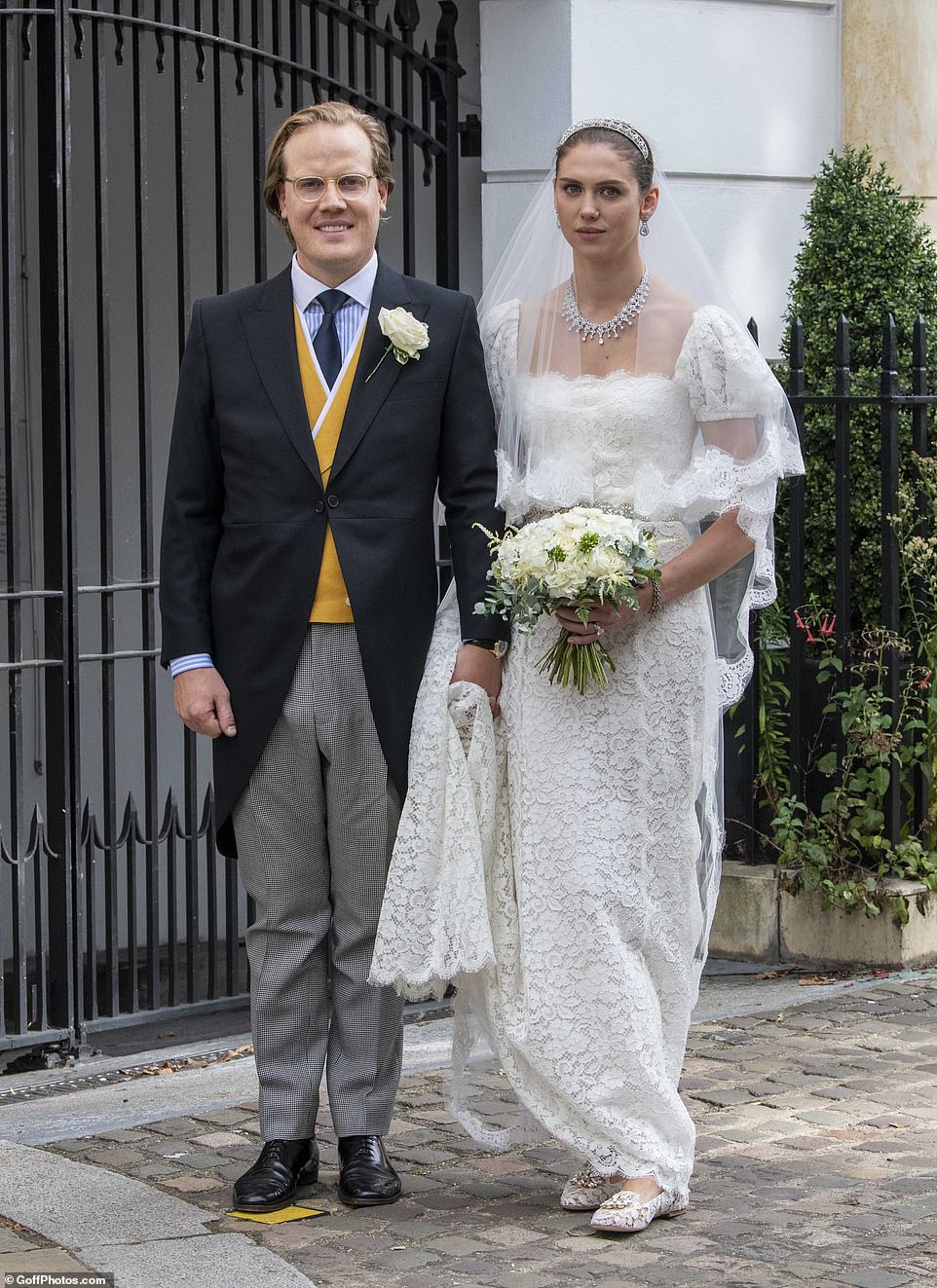 In one snap, Phineas could be seen holding up the veil of wife’s lace dress as they posed for a photograph 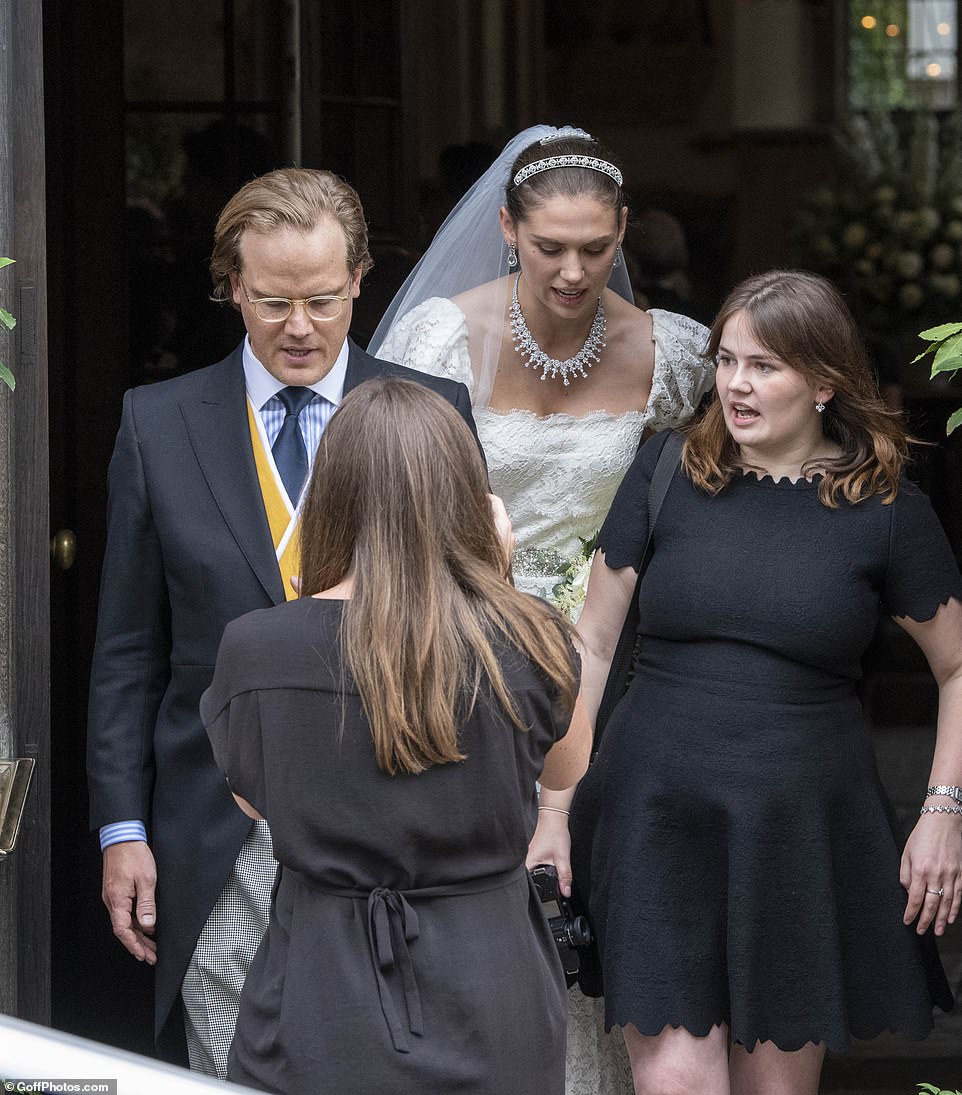 The happy couple exited the venue with their photographer, before being whisked off in a wedding taxi 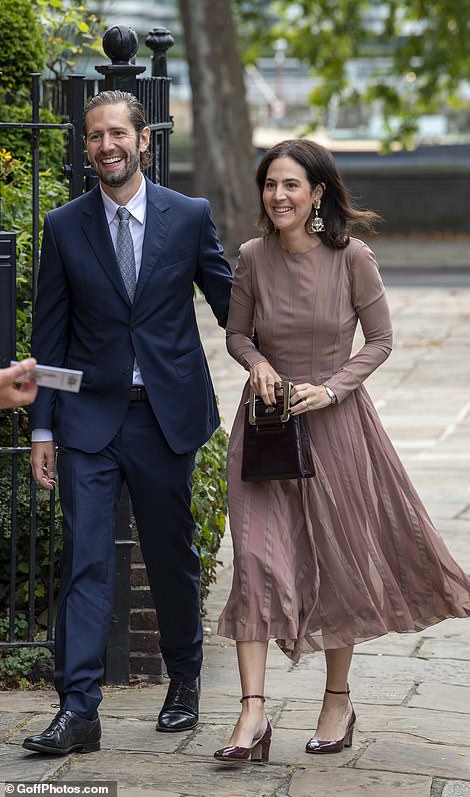 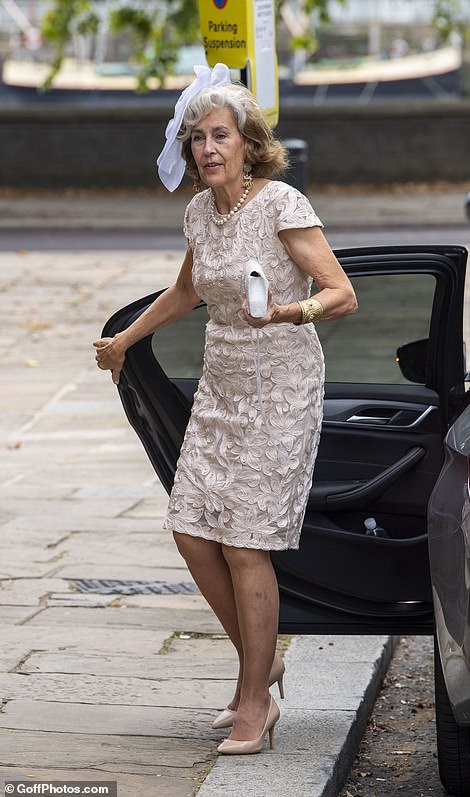 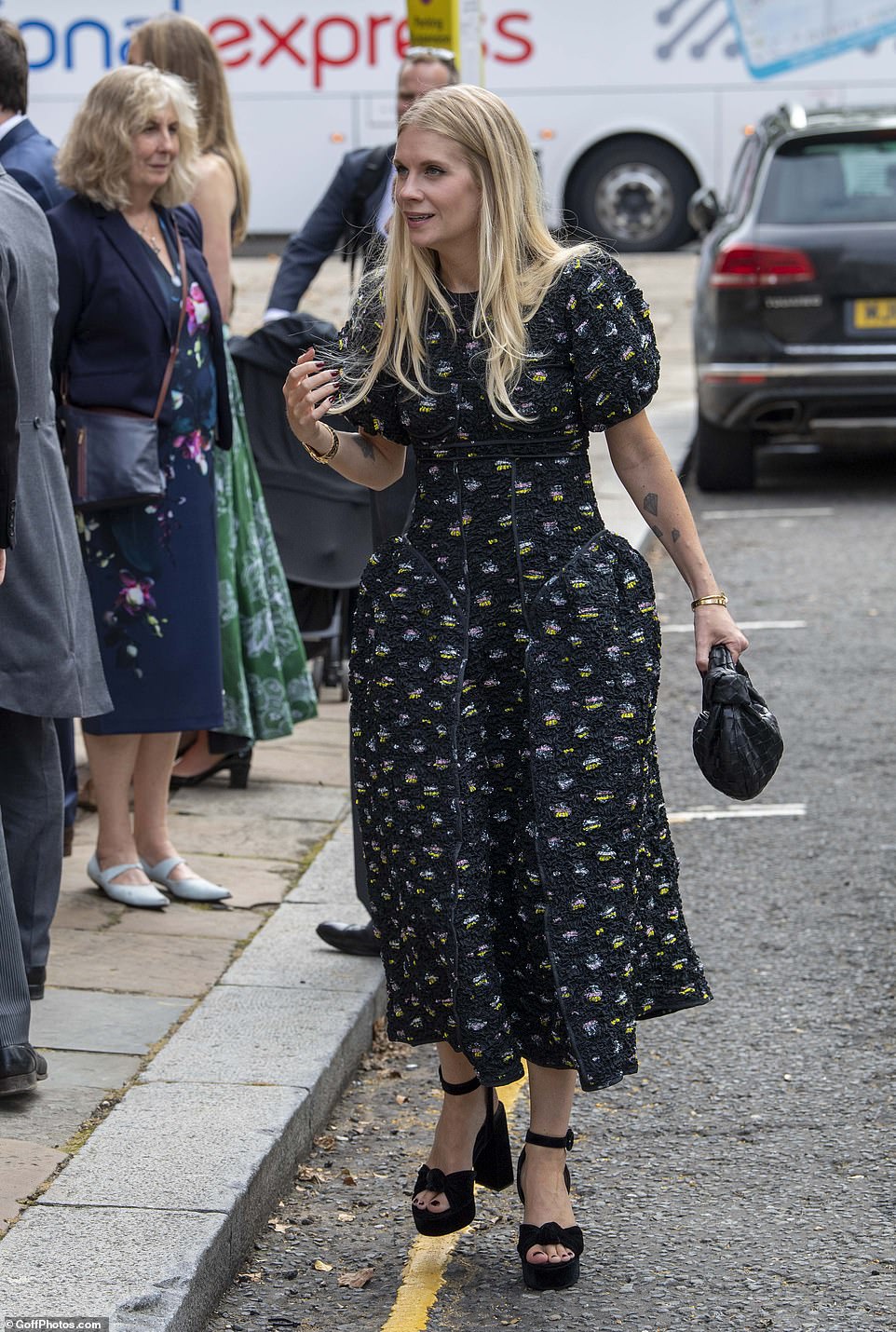 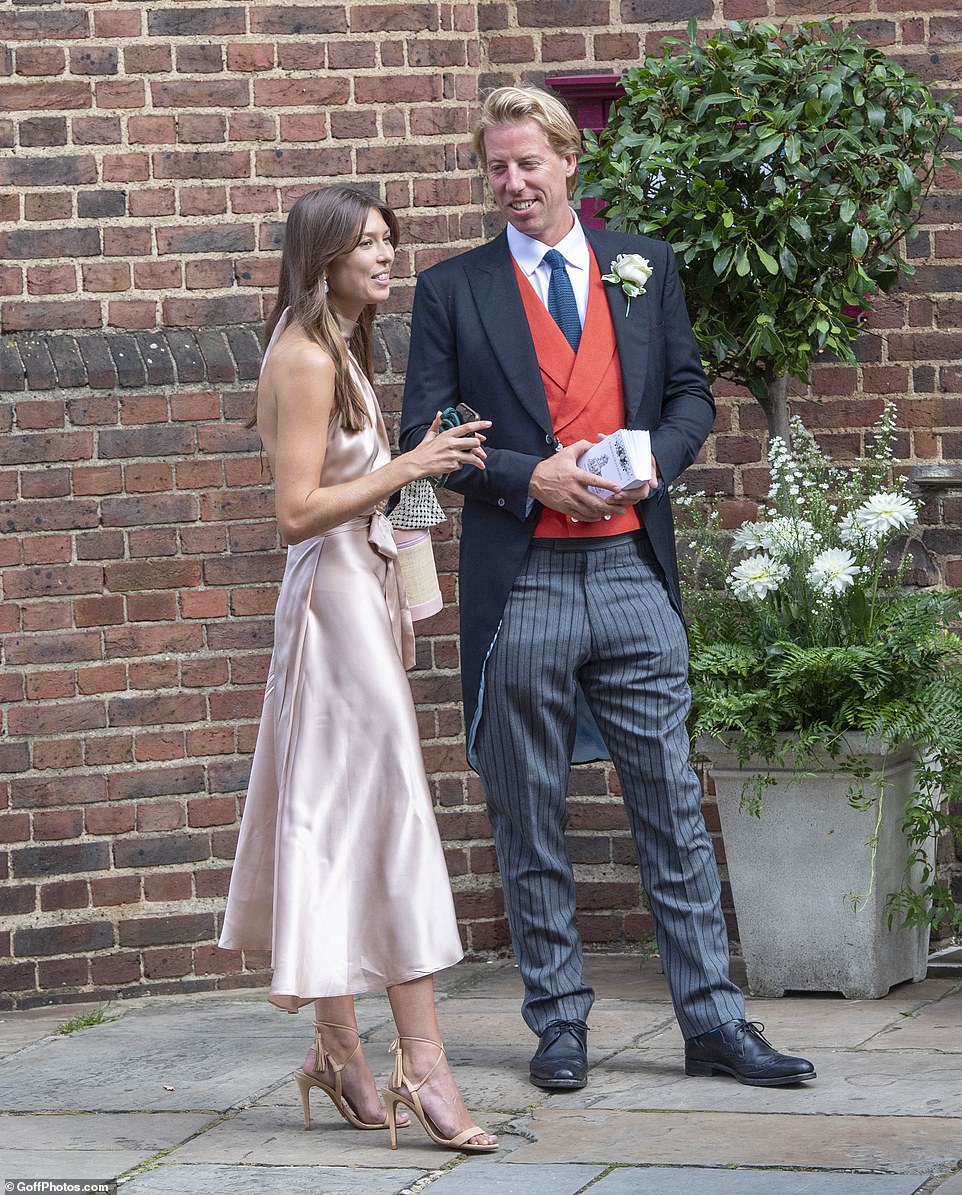 A male suitor made sure he stood out from the crown in a bold, bright red waistcoat which he contrasted with a navy tie 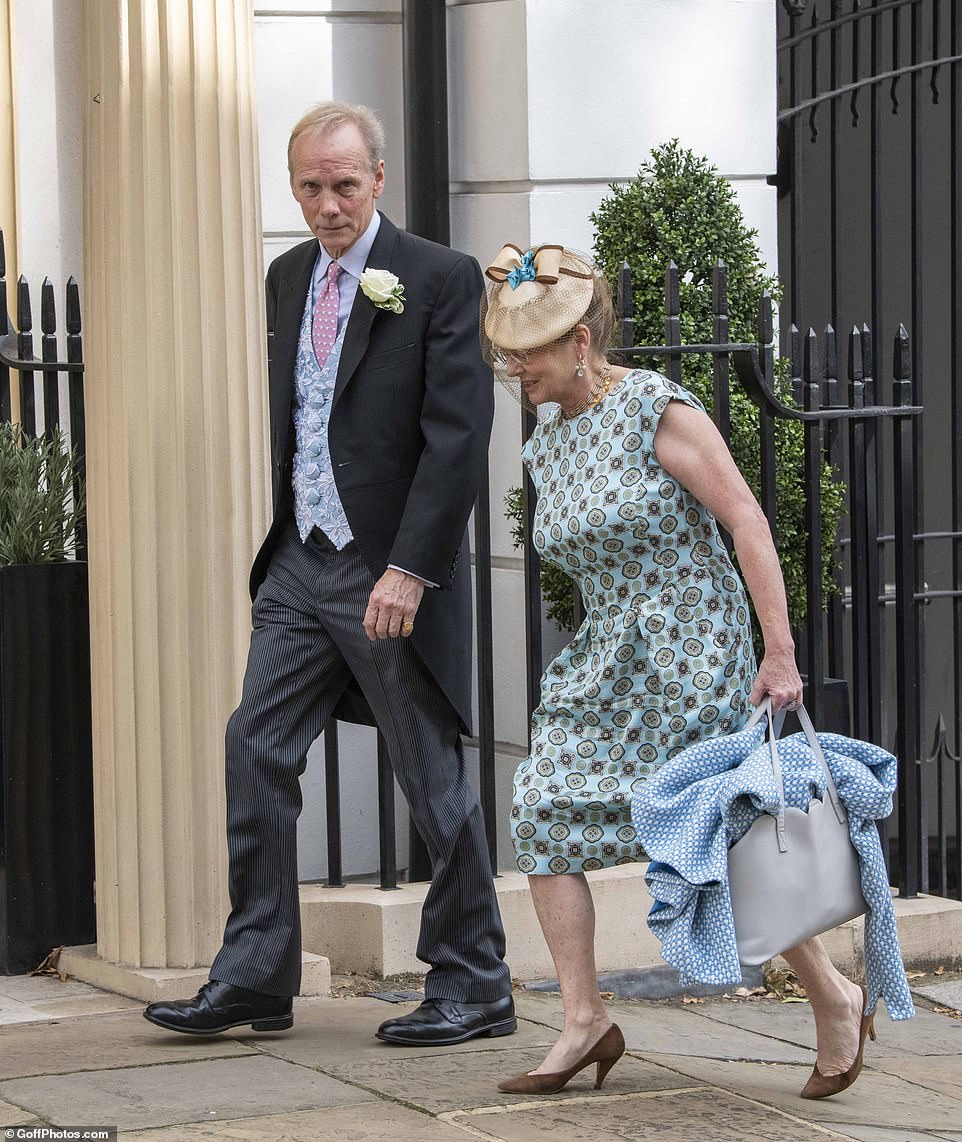 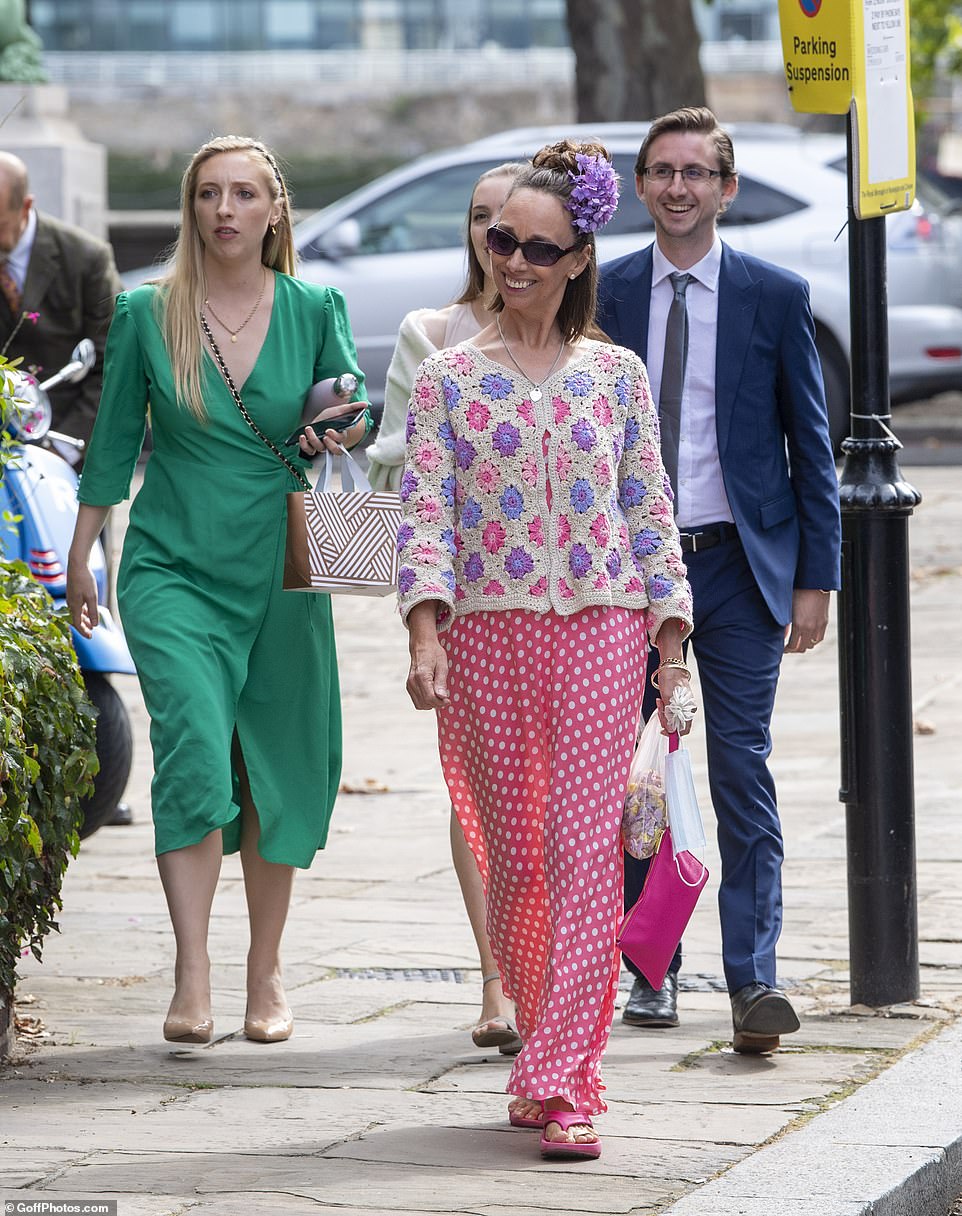 Pretty in pink! This guest brought the sunshine in a bold fuschia outfit complete with matching shoes and accessories

The pair were missing from the engagement party, which was a decidedly more intimate affair than the wedding.

Acoustic guitarists played in the background as guests sipped on glasses of Champagne as they toasted the happy couple, who became engaged on Christmas Day.

Phineas, whose family co-owns restaurant chains Franco Manca and The Real Greek, popped the question by presenting his girlfriend with not one, but four rings.

Speaking previously about the special moment, Sabrina said: ‘Inside my stocking were three small and beautifully wrapped gifts. The first was an emerald ring. I asked Phineas if it was an engagement ring and he said no.

‘I opened the second, a sapphire and diamond ring, and asked again if this was an engagement ring. He again said no.

‘I opened the third box, a beautiful ruby and diamond ring. I asked: ‘Is this an engagement ring?’ Phineas again said no. It was an emotional rollercoaster.

‘He handed me quite a large box. Inside was an elegant mini Cinderella pumpkin princess carriage — I love Disney — and inside the carriage was a beautiful diamond eternity ring.’

From stiletto heels to cool shades, guests were sure to put their best fashion foot forward for the society wedding (left and right) 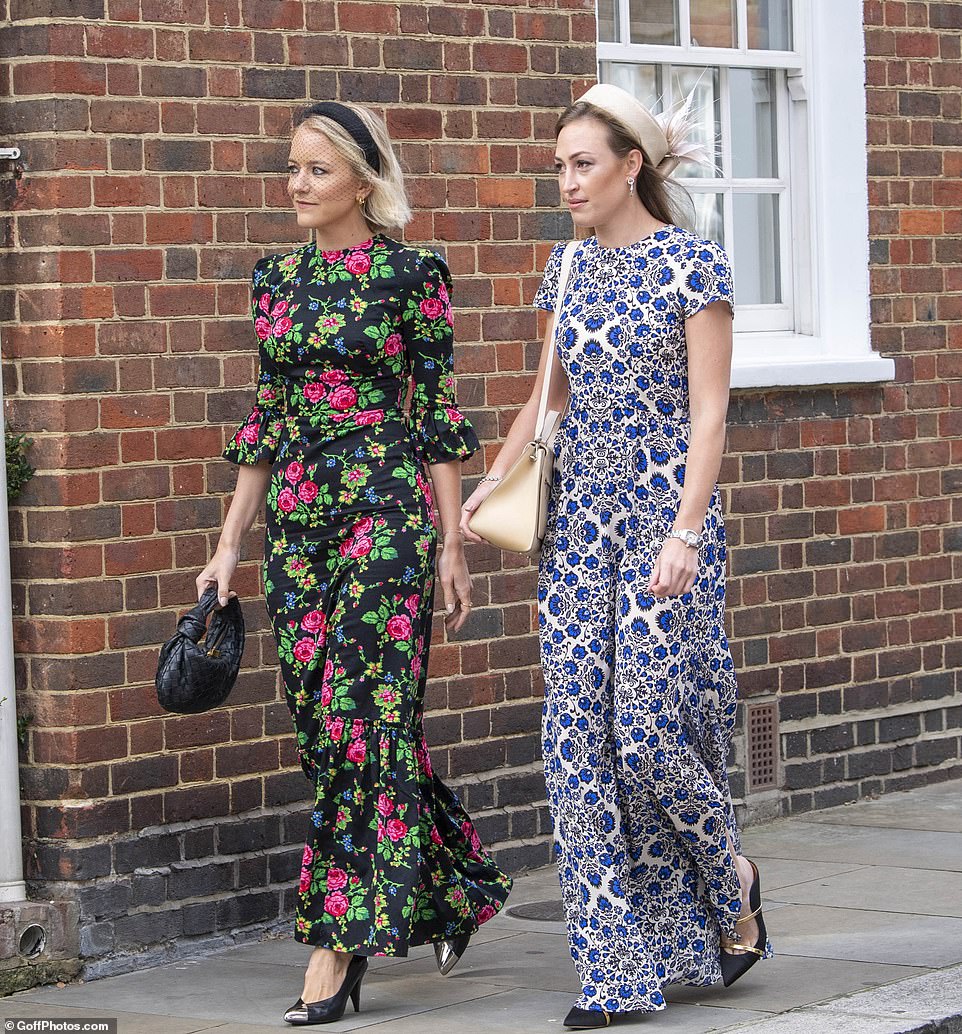 Flower power! These two guests both opted for floral full-length dresses as they arrived at the London venue

The couple had been due to tie the knot in June – one of a number of society weddings planned for this year – however they revealed to the Daily Mail’s Sebastian Shakespeare that they have now put the plans on hold due to the uncertainty surrounding the coronavirus pandemic.

‘I’m not really committing to a date at the moment because of Covid-19,’ she said.

This makes the children of the current Duke of Northumberland Sabrina’s third cousins, including Lady Melissa Percy, a close friend of the Duke and Duchess of Cambridge.

Alnwick Castle, which featured in the Harry Potter movies and Downton Abbey, is the seat of the Duke of Northumberland.