Merck’s antiviral COVID-19 pill may reduce risk of death from the virus by 30%, study shows

Merck’s antiviral COVID-19 pill may reduce risk of death from the virus by 30%, study shows

A new antiviral COVID-19 pill developed by Merck & Co may reduce the risk of death from the virus, a new study finds.

Molnupiravir was developed by the drug company Kenilworth, New Jersey, and may reduce the risk of hospitalization or death by 30 percent.

The company is currently seeking emergency use approval from the U.S. Food and Drug Administration (FDA), which will be discussed by agency advisers next week.

If the drug, developed in partnership with Ridgeback Biotherapeutics, is approved in the US – which it has already done in the UK – it will be the first oral medication approved to treat the virus.

A new study finds that molnupiravir (pictured), an antiviral pill developed by Merck, reduced the risk of hospitalization or death from the virus by 30%

The study, published Friday by the FDA, included more than 1,400 participants.

About 700 participants who recently started feeling symptoms of Covid were placed in one of two groups.

One group received the drug, the other received a placebo and operated as a control group.

Merck and Ridgeback Biotherapeutics have conducted a rigorous development program for molnupiravir and believe that molnupiravir has the potential to address a significant unmet medical need for an oral drug for adults with COVID-19 at risk of transition to severe COVID-19 and/or hospitalization,” Merck representatives wrote in a statement.

“We look forward to working with the FDA and other agencies in reviewing our applications.”

Previous studies have found even more promising results for molnupiravir, with the drug able to cut hospitalization risk in half, from 14 percent to seven percent. 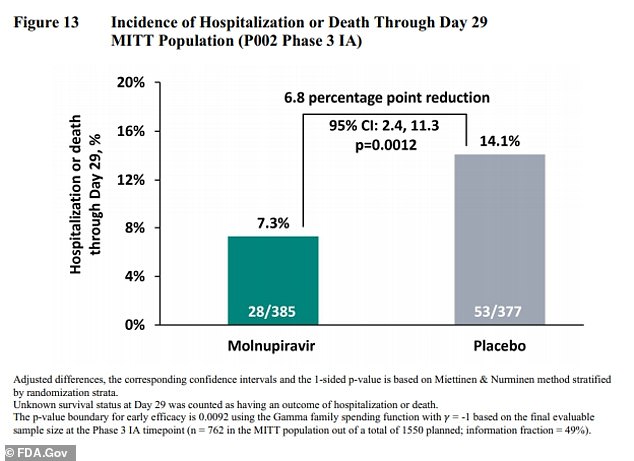 A previous study found that the drug could cut hospitalizations and deaths from Covid in half, from a 14.1% risk (right) to a 7.3% risk (left)

The drug works by stopping the virus from multiplying in the body.

It does this by introducing errors into Covid’s genetic code, hindering its ability to multiply in human cells.

The drug targets an enzyme that the virus depends on to make copies of itself. Merck said this process should make the tablet equally effective at tackling new variants.

If approved by regulatory authorities worldwide, the company plans to partner with generic drug manufacturers to distribute the drug in developing countries.

In July, the company announced it would partner with generic manufacturers in India to make the drug widely available in the Covid-hit country. 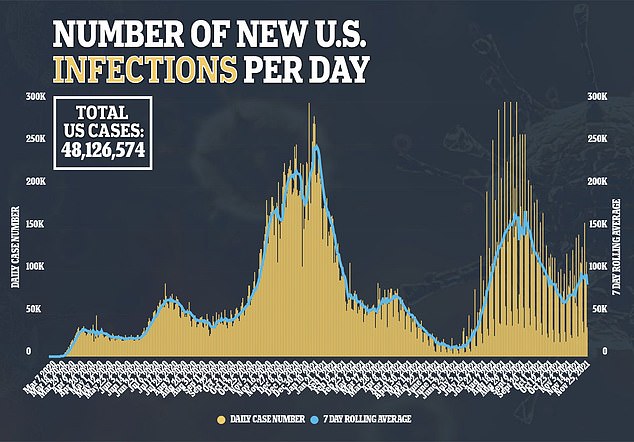 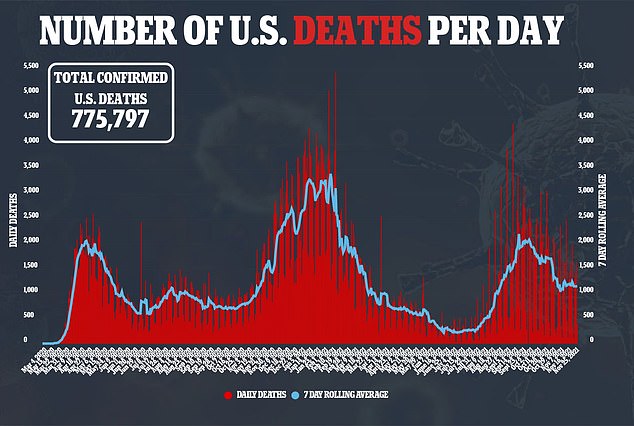 The company also announced this week a partnership with the Medicines Patent Pool, a United Nations-backed public health agency, to help distribute the drug to more than 100 other countries.

If the drug gets regulatory approval, the US will have a deal to order 1.7 million doses.

The approval could come as early as November 30.

France has also ordered 50,000 doses of the drug ahead of regulatory approval.

While the drug has not received full approval from EU regulators, it has been given the green light for use in some Covid patients who are considered to be at particularly high risk of serious complications from the virus.