A young woman from Japan stands at the back of a queue stretching down LaTrobe Street in Melbourne’s otherwise-empty CBD.

Armed with a shopping cart, the business student ought be across the road at the Queen Victoria Market preparing for a fun weekend with friends.

But this is Melbourne 2021 and she can barely afford to eat. 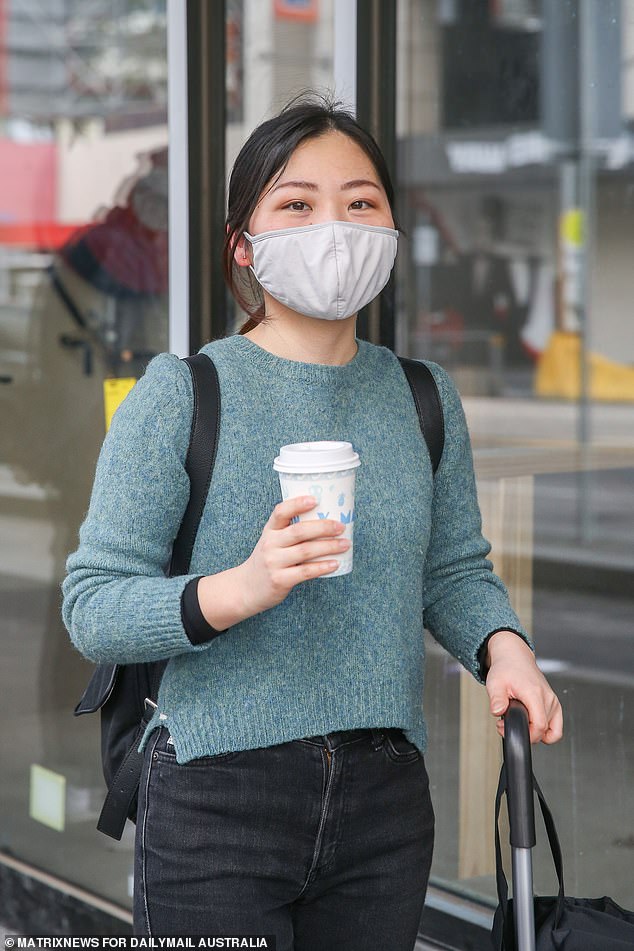 Japanese student Momoka has spent nearly all of her time in Melbourne isolated and locked away. She lined up on Friday at Melbourne’s Food Bank in the CBD 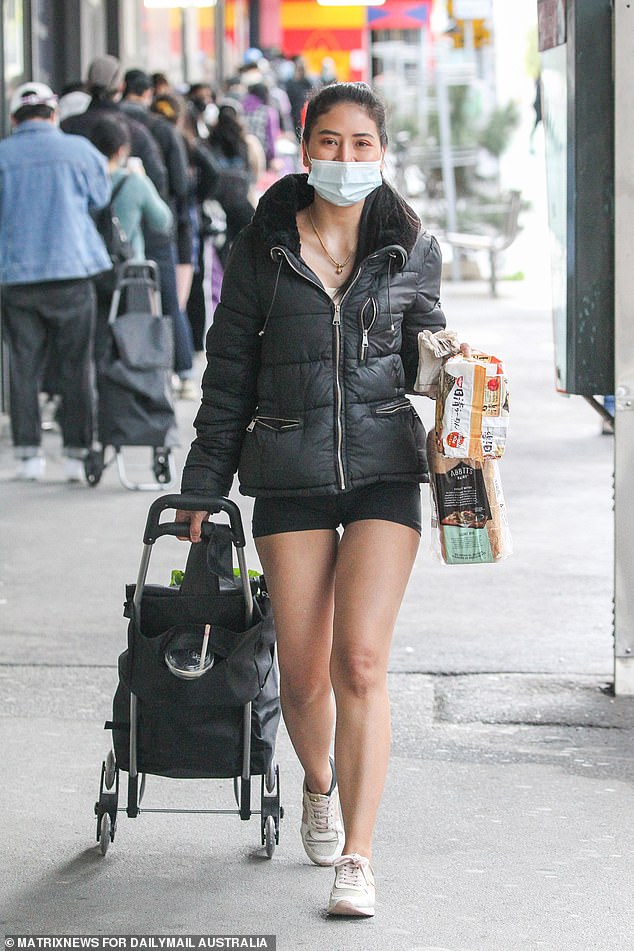 Kathy, an international student from Thailand who is studying business, leaves with free groceries from the Food Bank International Student Pop Up store on Friday in Melbourne 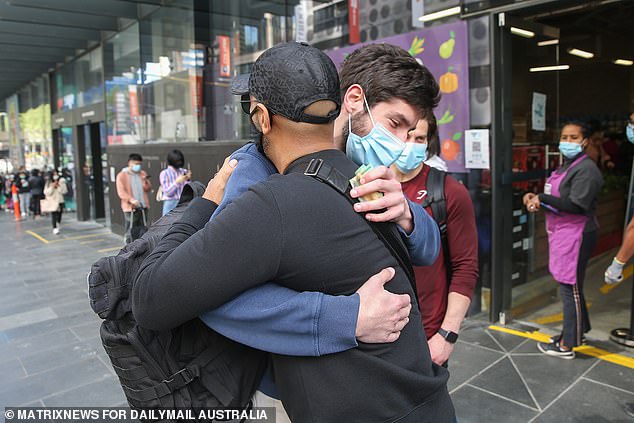 Luca (left) and Patrizio (right), both international students from Italy, are given $100 each from Good Samaritan James Godfrey at the Food Bank on Friday 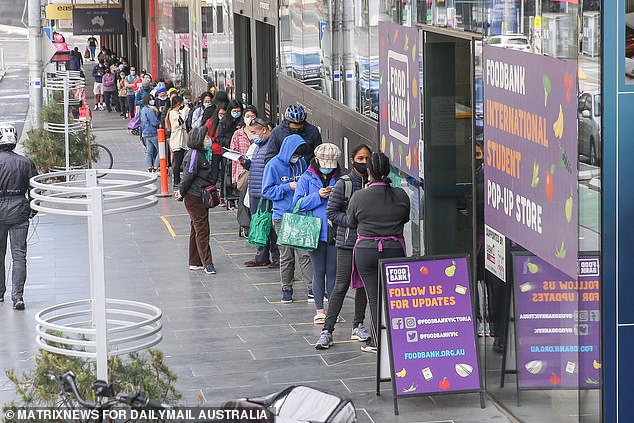 Hers is one of thousands of untold tragic stories forgotten or ignored amid Melbourne’s world-record lockdown.

Momoka was among hundreds to line the street outside of the Foodbank International Pop-Up Store.

She had landed in Melbourne almost on the day Australia shut its doors to the world last year and Victoria locked everyone away.

The plight of foreign students is often overlooked by the wider community, which largely dismisses them as ‘poor rich kids’ bankrolled by wealthy parents.

But the reality is there to be seen three days a week in Melbourne’s CBD, where students patiently wait for a chance to fill their baskets with fresh produce they cannot afford to buy themselves.

Despite the perceived indignity of their obvious hardship, the students were gracious with their time as Daily Mail Australia spoke to them candidly about their plight.

There have been other days standing in line where kindness has not be shown back to them by the general community.

Passersby often treat them with contempt, with one man just recently seen hurling abuse at them because he could not find workers to fill jobs.

International students are only able to work 20 hours a week while studying in Australia, which means many do it tough – pandemic or not.

Before the pandemic, about 400 students would attend the pop-up shop in a day.

Socially distanced, with only 25 at a time allowed in, they wait outside in the cold for a chance to eat. 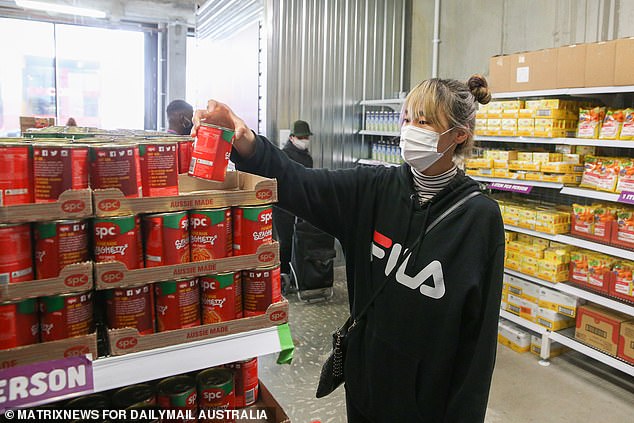 Yon, an international student from South Korea, attended the Food Bank on Friday. She was among hundreds to take advantage of the initiative 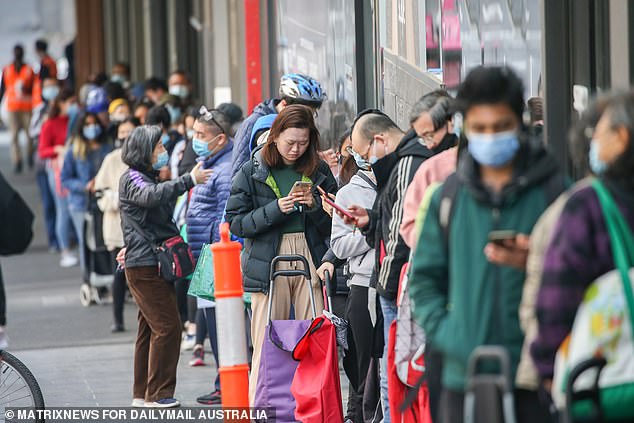 Hundreds line up outside Melbourne’s Food Bank on Friday. Many are in the same situation because of Melbourne’s harsh lockdowns 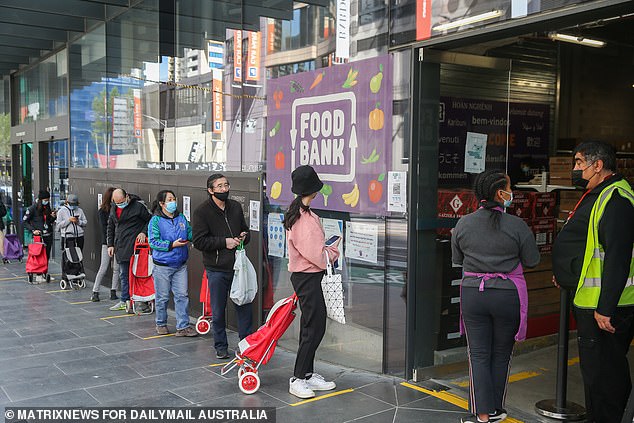 International students line up with trolleys outside Melbourne’s Food Bank on Friday. Many have lost what little work they can do due to the pandemic

Ramphaphak, or Kathy for us Australians, came from Thailand to study in Melbourne when the pandemic hit.

She came to study business, of which there was very little about in Melbourne CBD on Friday.

Kathy had found the Food Bank in desperation as she searched for help on the Internet.

‘Before, there was hardship. I lost my job and this has helped me a lot because they have many products here,’ she said.

Kathy had worked in a busy sushi restaurant before the pandemic saw it, and her, thrown on the scrap heap.

‘When they re-opened they only wanted full-time staff. So many people lost their jobs,’ she said.

‘Hopefully after lockdown ends I can find a job again.’

Like everyone Daily Mail Australia spoke to on Friday, Kathy expressed love for a town which she has been restricted from truly experiencing.

‘I love Melbourne. It’s tough times. But it’s better than Thailand I think because of the support we get here in Australia.’

Naeem Jummon was equally positive despite constant hardship during the pandemic.

From Bangladesh, Mr Jummon is studying carpentry at Victoria College. 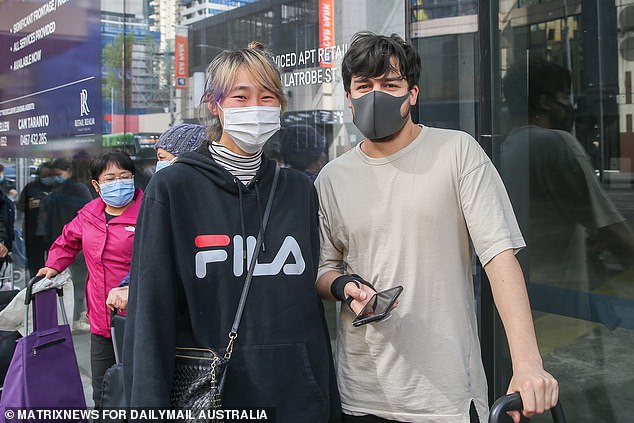 Yon from South Korea and Santiago Mal from Columbia attend the Food Bank on Friday. Both had lost jobs during Melbourne’s hard lockdowns 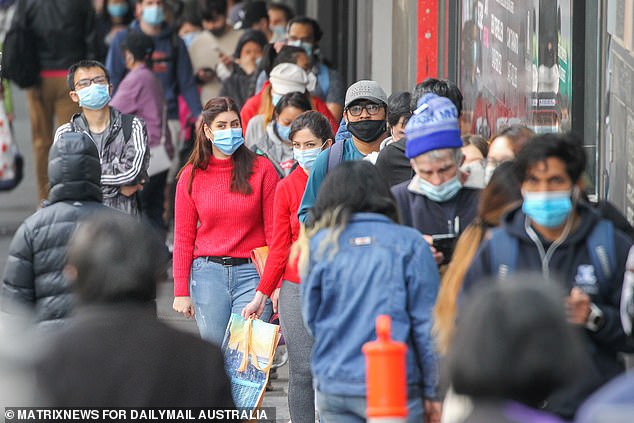 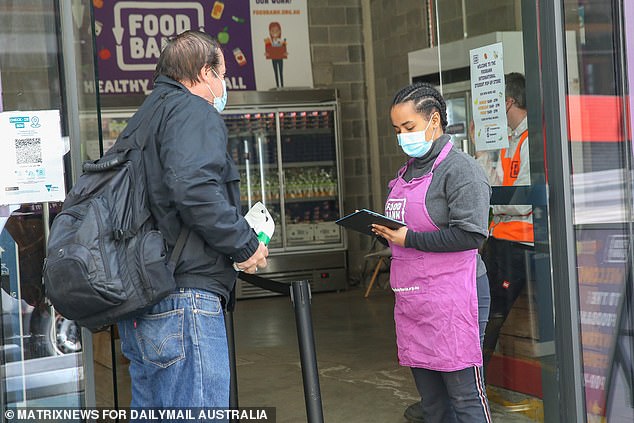 Food Bank staff make sure only 25 people at a time are inside the shop, which sees lines stretch down the road

He has been here for four years and claims he has only seen ‘good times’ despite losing more jobs during the lockdowns than he can remember.

While now working some hours at the nearby Queen Victoria Market, he still has to line up for free food.

‘I hope this job is going to be permanent,’ Mr Jummon said wishfully.

‘This Food Bank helps a lot. It’s helping everyone because we have to pay our tuition fees and expenses, pocket money. So it’s hard to find a job and get money. If this food was not here, we are going to be in trouble.’

Mr Jummon said students only got a government handout if they lost their job after working for six hours.

‘I lost my jobs in four hours. So I think the government should take care of us a little bit more, help with rent or something,’ he said.

‘We’ve been locked down too long. We need to meet our parents again.’

Along the line are similar stories from people that came here from all parts of the globe. 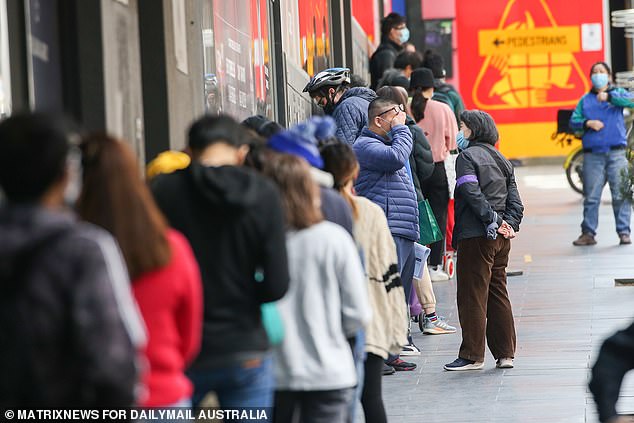 Come rain, hail or shine, the Food Bank opens to help those in need. 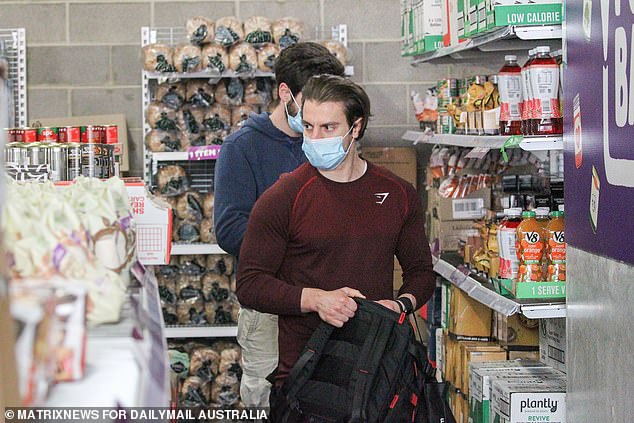 Italian student Patrizio does some shopping inside the Food Bank on Friday. A Good Samaritan slapped $100 on him as he left 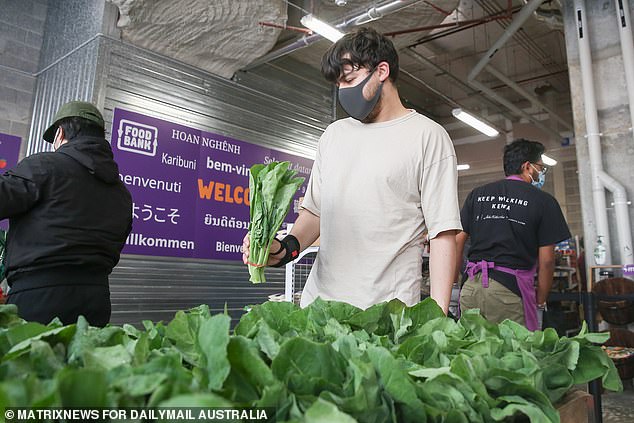 Santiago Mal has been in Melbourne for three years after coming here to study carpentry from Columbia.

His girlfriend Yon is from South Korea and got here too when the pandemic hit.

Like everyone else, the young couple has struggled to get by during the repeated lockdowns.

‘I’ve been sending a lot of emails and CVs, but most of the people say they need a full-time worker,’ Mr Mal said.

The couple has relied on the kindness of friends, who have helped them survive up until now.

‘I’ve lost my job temporarily,’ Yon said. ‘I used to work as a barista, but the cafe has closed.’

Their luck would pick-up by the time they left the Food Bank on Friday.

Standing at the front of the line, a man wearing a Bumbag looked on with quiet concern.

IT guru James Godfrey had seen hardship in his travels across the world too.

In Manilla, he would walk the street and help mothers and their babies that he had found huddled under bushes. 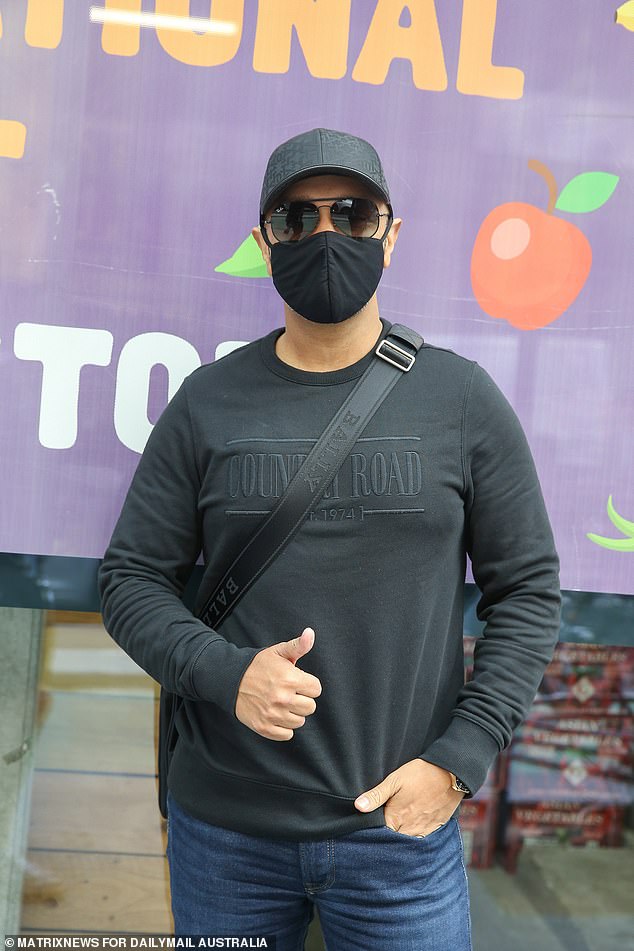 Melbourne IT guru James Godfrey arrived at the Food Bank with a bag full of money, which he handed out to struggling students 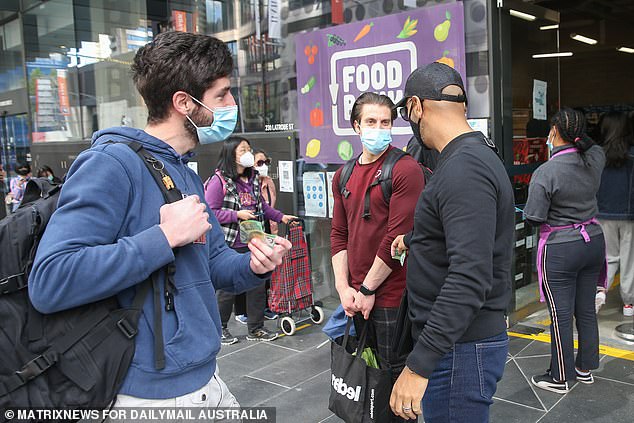 James Godfrey puts cold hard cash in the hands of two Italian students, who thought they were being pranked 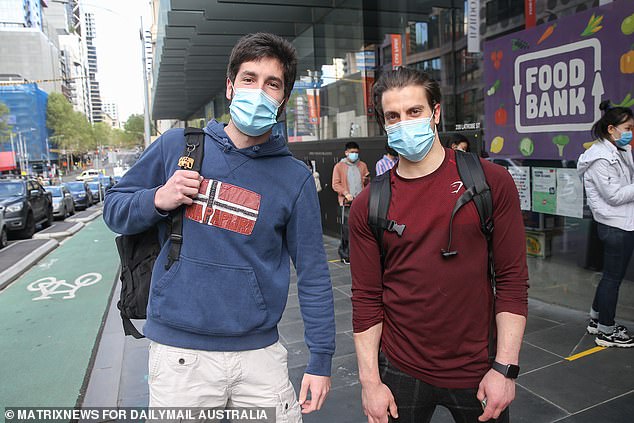 He didn’t know he was speaking to Daily Mail Australia when he asked who the most vulnerable people waiting in line were.

His bag was full of hundred dollar notes and he wanted to hand them out to random strangers.

As Italian students Luca and Patrizio departed the Food Bank, he jumped forward and pressed hundred dollar notes into their hands.

The shocked youths thought they had been set-up in some kind of sting as they were photographed by Daily Mail Australia.

The English and hospitality students had been doing it tough – both had lost work during the lockdowns.

‘We’re all in the same boat here,’ Luca said. ‘So this is amazing.’

A humble Mr Godfrey told Daily Mail Australia he simply had a ‘big heart for people who were struggling’.

‘You look at the people here. They’re not on the streets using drugs, they’re just trying to get by. They’re trying to support their families. A lot of these guys can’t even go and ask their families for money,’ he said.

‘They can only work 20-hours a week then they’ve got nothing. Everything has been shutdown and I just thought “you know what, why not come and bless them”. They’re forgotten, they can’t rely on government support. So I’m just here to love.’

With that, he walked down the line and handed out cash with no questions asked.

At the back of the line, Momoka quietly stood her position.

She was already among the ‘lucky ones’ who had managed to maintain a job as a cleaner.

Even then, the money was not enough to regularly put food on her table.

‘I clean offices and it’s not busy at all,’ she said.

Locked away on her own for nearly two full years, Momoka has struggled to make friends and spends much of her time locked-up alone.

She longs to be free and experience the stories she had heard about Melbourne before the pandemic ripped its heart out. 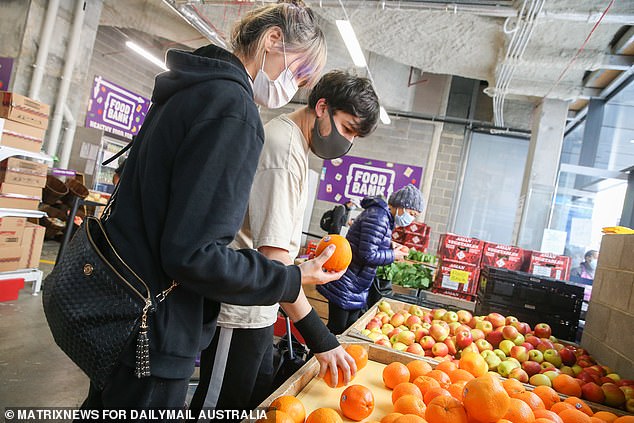 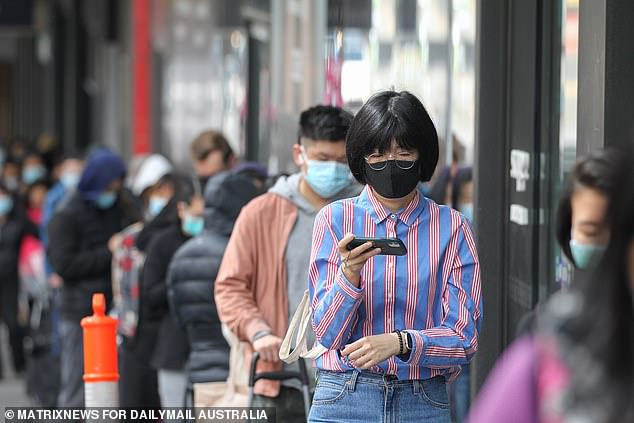 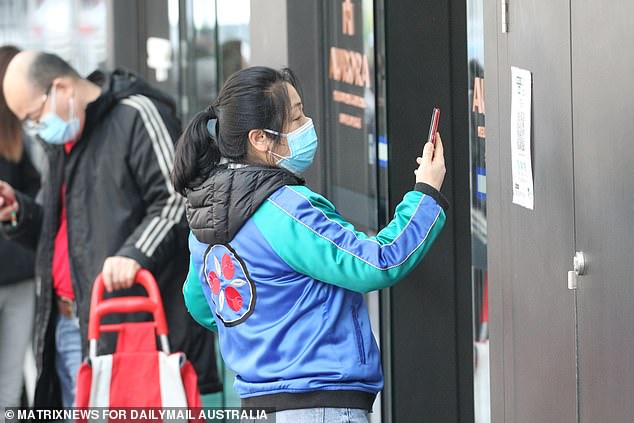