The Loose Women panel clashed today as they debated whether Covid-19 lockdowns should limit only unvaccinated people.

Coleen Nolan, Katie Piper, Jane Moore and Kelle Bryan were on the program today and discussed whether it was appropriate to put restrictions on those who had not had the shot.

While Katie claimed it would “create a two-tier society,” Jane insisted that the government “needs more persuasion” to encourage the public to get vaccinated.

The debate comes as it was revealed that Austria is considering a Covid-19 lockdown that would limit only unvaccinated people as virus cases continue to rise. 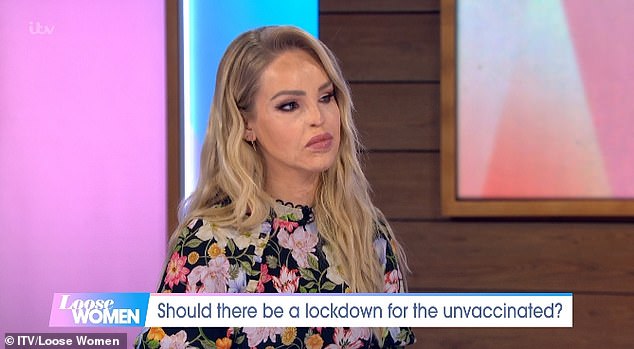 Katie started the discussion today, insisting she thought it would be wrong, saying: ‘I don’t believe in discriminating against people who, for whatever reason, haven’t had a vaccination.

“I think it would create more division and more isolation for a section of society that is already isolated pre-Covid and pre-pandemic.

“I’m concerned about the precedent it would set for other treatments and other shots that could deprive people of choice.”

She pointed out that people receiving end-of-life care, those with learning disabilities and those with severe allergies to all currently available vaccines are restricted under the rule. 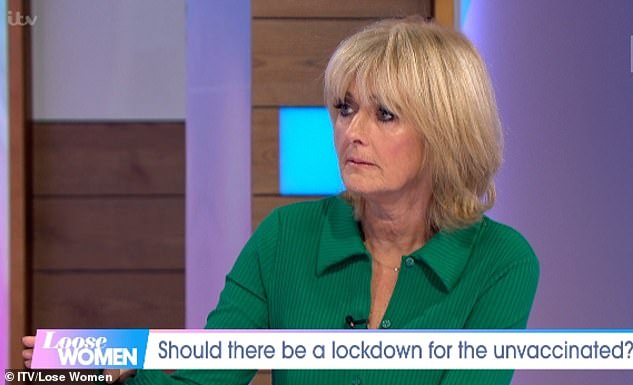 However, Jane Moore suggested that the government “need to be more persuasive” to encourage people to get the jab

She added: ‘A large number of people in my life would be restricted from leaving the house or entering certain immunities. It’s something I have to stand on and say I don’t agree with.”

Jane refuted this, saying: ‘I think people who are exempt from having the vaccine wouldn’t be locked up because it’s clearly not their problem – they can’t physically have the vaccine, so they can’t be discriminated against.

“What we’re talking about are anti-vaxxers — those who could get the vaccine.

“I’m just like you, I don’t agree, I don’t think we should discriminate against people, but we should be more persuasive.

‘Otherwise, we’re going to run into the same kind of problem over and over again. I don’t think any of us want to go back into lockdown again.’ 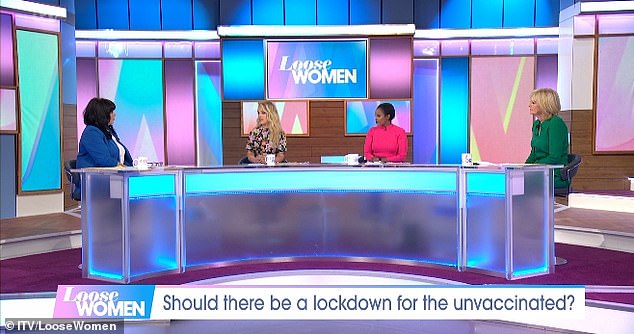 The panel was divided over the debate, with Jane insisting that the public “listen to people trained as doctors”

Katie said she felt it would create a ‘two-tier’ society, but Jane continued: ‘We need to be more persuasive about getting people to get their vaccines and follow it up with a booster.

“When you have the medical director of NHS England and he says, ‘The freedom we all enjoy now is the willingness of patients to come forward for jabs.’

Coleen interrupted him and said, “People have lost faith in it. I have to say, I totally understand your point of view and of course I’ve had my shots, but I don’t like to say to people whose choice it is not to have it, to have them in another part of society.’ 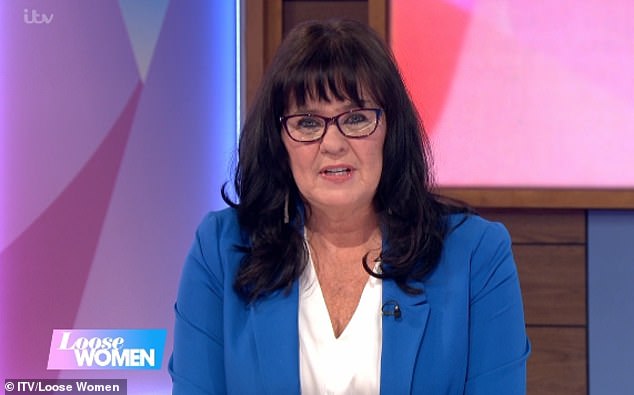 Sajid Javid hints 100,000 unvaccinated NHS staff could be fired as he admits he is ‘tending’ to mandate Covid shots for all medics

Unvaccinated NHS staff will be told to get their Covid shots or lose their jobs under plans being considered by the government.

About 100,000 health workers – or seven percent – have yet to show up for their first dose in England.

But Health Minister Sajid Javid said introducing mandatory jabs was the “clear direction”, despite fears that staff could leave the health service at a critical time.

When asked if the plans could come in this winter, Javid told Sky News, “I’m leaning towards doing it.”

He said those who didn’t get the shot were putting critically ill patients at risk.

Labor leader Sir Keir Starmer said forcing medics to be vaccinated was a mistake, and warned it could exacerbate staff shortages among doctors and nurses.

The ‘no shot, no job’ policy is already in place in care homes and staff working in old people’s homes must be put in place before November 11.

Healthcare bosses have warned that many homes will be forced to close because they cannot find enough vaccinated workers.

Studies show that the vaccines dramatically reduce a person’s risk of being hospitalized or dying from Covid, but they are slightly less effective at stopping the transmission.

‘It’s a change of mentality, not just thinking about yourself and your individual. But also think about the consequences that could have for people in the community.’

Katie added: “I’m definitely thinking about others, I’m thinking about people in my life and my community who are not only exempt, but don’t want it.”

She continued: ‘If you tell people you’re exempt, that’s fine, you don’t have to, doesn’t that make a mockery of the concept?

“If those people would then let the numbers rise and spread, even though they are exempt for legitimate reasons.

‘I just think it’s going to be dangerous territory where people have to declare health conditions, people have to explain private things from their past.

“Maybe you’re working with someone with an invisible disability they’ve never wanted to share.”

And many viewers supported Katie in the argument, with one writing, “We have to be very wary here. If we start locking people up for making a choice, it sets a very dangerous precedent.’

Another wrote: ‘I have been vaccinated twice, but would strongly protest against the right of people who do not want it. We live in a society where there should be freedom of choice without discrimination.’

It comes after Chancellor Alexander Schallenberg broke the news late Friday during a meeting with state-level leaders to discuss a national response to the rising number of infections.

“The pandemic is not yet in the rearview mirror,” Schallenberg said. “We are about to enter a pandemic of unvaccinated people.”

Schallenberg announced that if the number of Covid patients in intensive care units reaches 500, or 25 percent of the country’s total ICU capacity, access to businesses such as restaurants and hotels will be restricted to those who have been vaccinated or recovered from the virus.

When the number reaches 600, or a third of the total IC capacity, the government plans to impose restrictions on unvaccinated people. In that case, they should only be allowed to leave their home for specific reasons.

Currently, the number of COVID patients in ICUs stands at 220.

According to health authorities, Austria reported 20,408 new cases of the virus last week, bringing the seven-day average to 228.5 per 100,000 inhabitants.

Although the Austrian government has encouraged citizens to get vaccinated, efforts have slowed down in recent months.

About 65.4 percent of the total population has received one dose of the vaccine and 62.2 percent has been fully vaccinated. 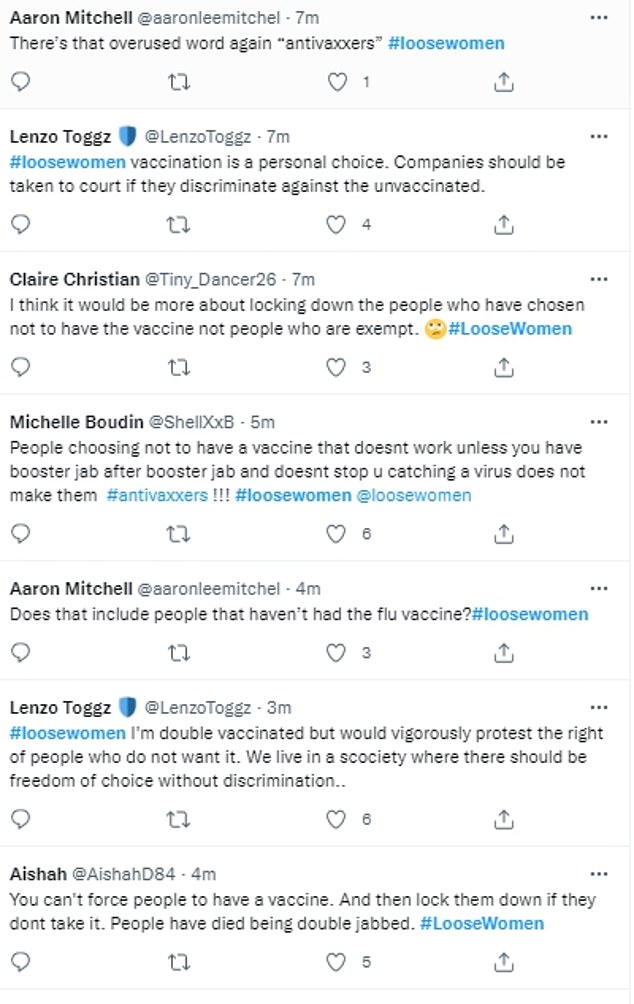