La Palma volcano stops, but experts warn that the eruption is not over yet

The brief hiatus, during which volcanic activity dwindled almost completely, caused scientists to scramble to find out what it means — amid warnings that the eruption isn’t over and could just enter a new phase.

Volcanologists theorized that a vent could be temporarily blocked or underground channels could shift, potentially diverting lava elsewhere and opening a new vent.

Meanwhile, new lockdown orders have been issued today for three areas as lava already expelled from the volcano continued to seep into the ocean.

Angel Victor Torres, president of the Canary Islands, said molten rock could reach the ocean “within hours” where it will release a cloud of poison gas as it mixes with seawater – warning local residents to stay in their homes with their windows locked.

Those directly in the path of the lava flow have already been evacuated. 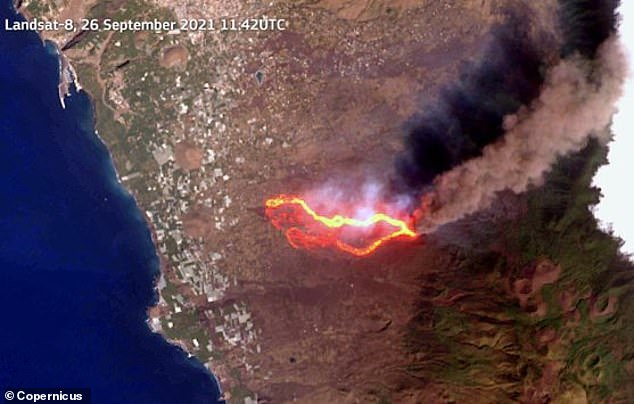 EU weather satellites took the first clear picture of La Palma’s volcano without clouds on Sunday, showing the extent of the devastation it has caused 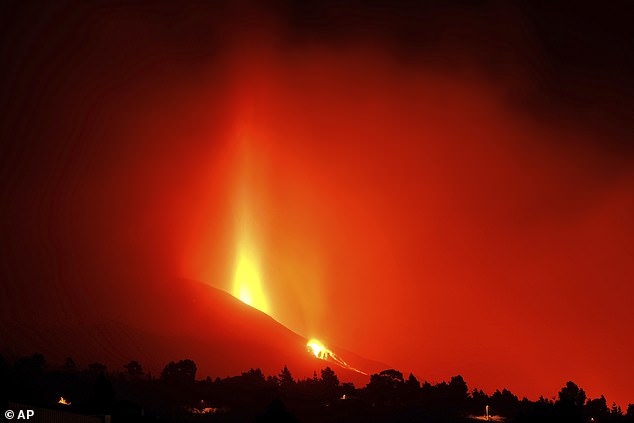 The volcano continued to erupt Sunday night but stopped around 10 a.m. Monday as scientists scrambled to find out why 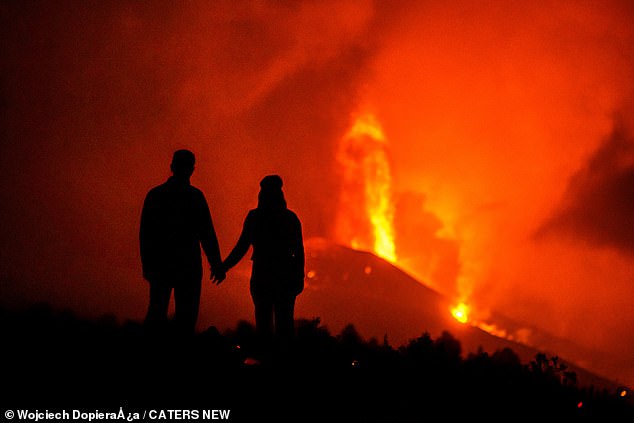 A couple hold hands as they watch the eruption of lava from La Palma volcano Sunday night, just hours before the eruption stopped 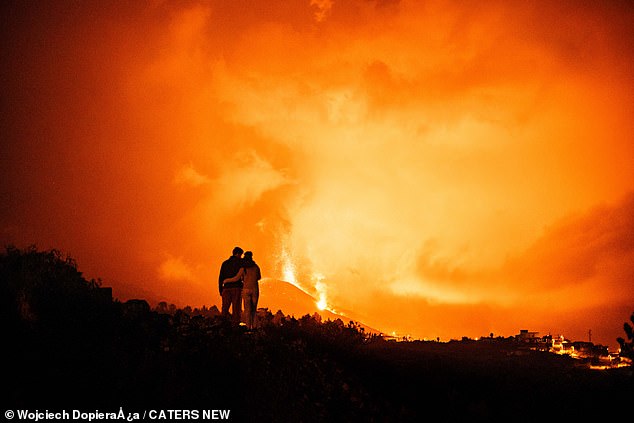 “The population will have to follow the guidelines of the authorities and stay in their homes with doors and windows closed,” the emergency services said on Twitter.

La Palma’s new volcano, located on the Cumbre Vieja ridge in the south of the island, started erupting on September 19 and has been spewing a continuous flow of lava and ash ever since.

There have been periods of high and low activity since the eruption began, Monday being the first time it has stopped completely.

Geologist Nahum Mendez Chazarra told Spanish newspaper LaSexta that the volcano could just “charge up” before an eruption of activity occurs.

David Calvo, of the Canary Islands Volcanology Institute, told La Vanguardia another explanation could be that a vent has become clogged.

That could mean the maga is diverging to another part of the island, Mr. Calvo added, noting that a cluster of earthquakes were detected today about 10 miles south of the eruption site, close to the Teneguía volcano that formed in 1971 broke out.

“It could be that there is magma migration in the interior of the island … to more accessible areas, or there may be an adjustment of the island’s structure in response to the magma egress.

“There’s more magma,” he added. “It’s not certain that it will come true.”

Monday’s slowdown in activity comes after a very active weekend, with a new vent in the volcano being opened on Saturday — ash rain on the east side of the island, which has been largely untouched by the eruption until now.

La Palma airport was completely closed on Saturday and most of Sunday due to the ash fall, fearing it could damage aircraft engines. 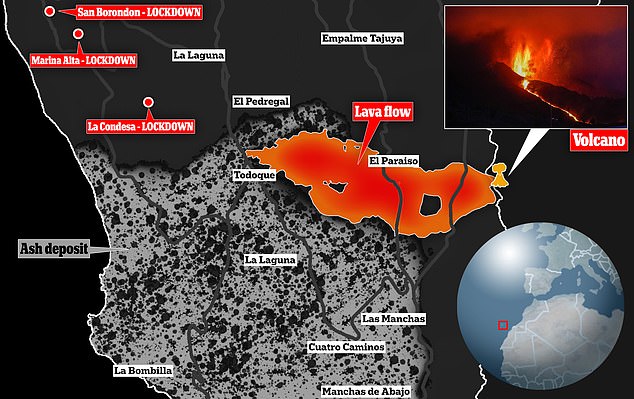 A map showing where the lava flow has reached (in orange), where the ash plume is covered (in gray), and the areas that have been sealed off today (top left) 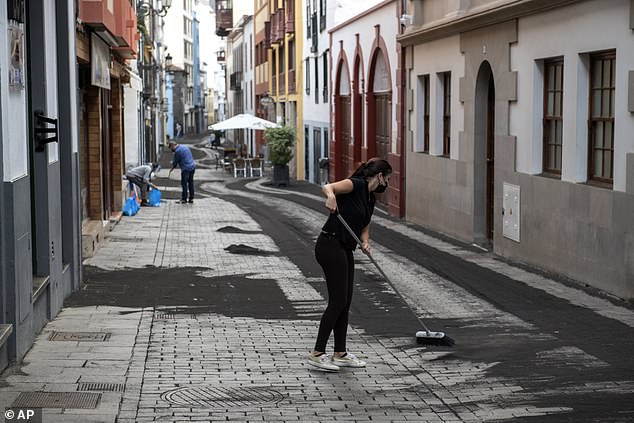 Ash has been pouring from the volcano since late last week, covering nearby towns as officials warned it could cause lung damage if inhaled 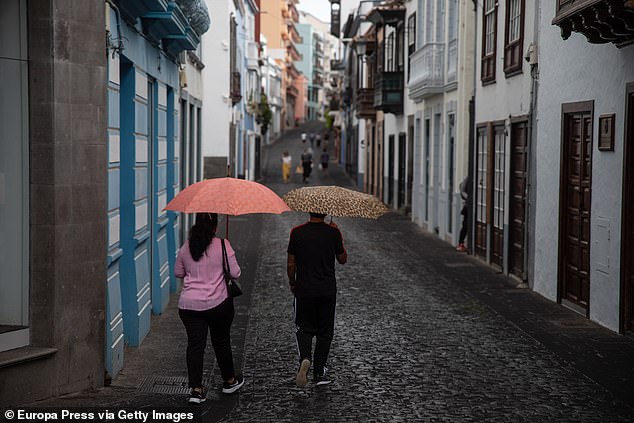 People carry umbrellas through Santa Cruz de La Palma, the island’s capital, on Sunday to protect themselves from ash falling from the volcano 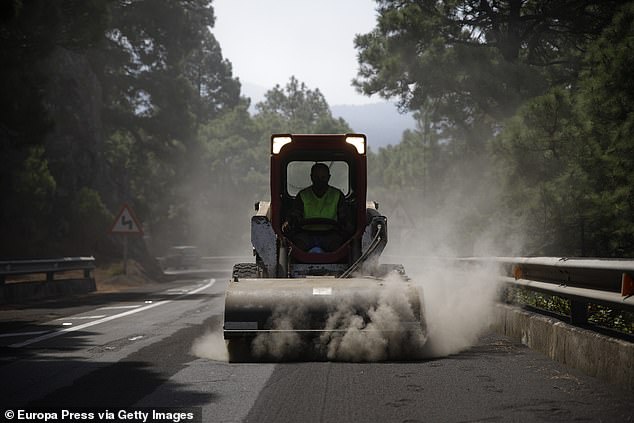 The runway reopened on Sunday evening after the runway was cleared, although all inbound and outbound flights were canceled by transportation companies.

As it turned out, flights took off and landed on Monday morning, with only one inbound and one outbound flight – both to and from Madrid – being cancelled.

About 6,000 people have been evacuated from their homes because of the eruption, which was triggered by a cluster of earthquakes, prompting authorities to stay alert and prevent casualties.

While ash and lava have covered an area on the west side of the island, life on the rest of La Palma – which is about 22 miles long and 12 miles wide at its widest point – is largely untouched.

“We are not in a state of total alarm,” the technical director of the volcano emergency response unit, Miguel Angel Morcuende, told a news conference.

“Life on the island continues, although those close to the eruption are struggling.”

Officials said the falling volcanic ash poses no threat to public health, but cleaning it up could be dangerous to people’s lungs and eyes.

They urged people to wear a face mask, gloves and eye protection, as well as pants and long-sleeved shirts when removing ashes.

About 25,000 tons of sulfur dioxide are emitted from the crater every day, but this poses no threat to health, officials said.

When the airport closed, long lines formed at ports as people tried to catch ferries from the island to its neighbors — where flights still took place.

Two rivers of lava flow down slopes: one to the north, where molten rock from a new fissure is spreading over an area where the lava spread and hardened last week, and another south of it, moving at about 30 feet per hour. moves.

The temperature of the lava is about 1250 degrees Celsius (2282 degrees Fahrenheit).

Pope Francis said Sunday he was praying for all those affected by the volcano, and dedicated a prayer to them at the end of his weekly afternoon blessing in St. Peter’s Square.

“I am thinking especially of those who have been forced to leave their homes,” he said. 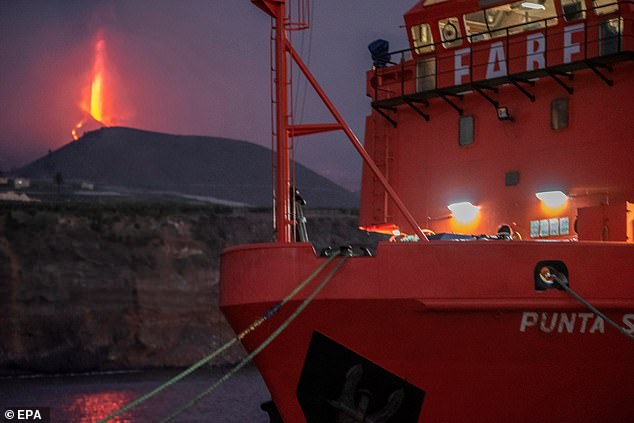 Ash from the volcano caused the island’s airport to close over the weekend, diverting people to ferries to neighboring islands – where planes took off 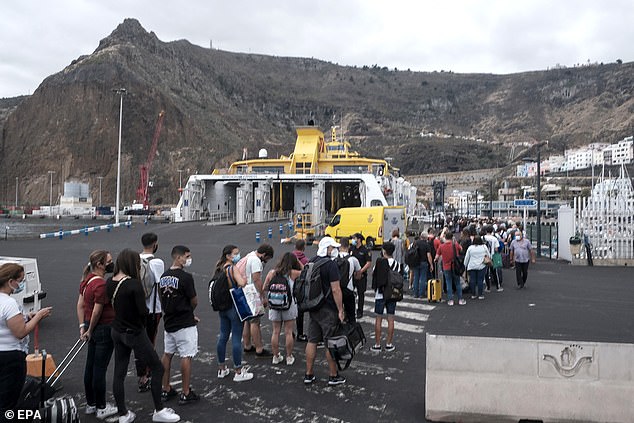 The best guided tours, from Thailand to Canada via Cornwall and Ireland