She recently stepped out in quirky ensembles in Paris for fashion week.

And Iris Law again showed her fashion credentials when she arrived on Friday at the Vogue exhibition at the Palais Galliera in the French city.

The budding actress, 20, wore a striped green and gold oversized suit which she wore with a striking glittery cardigan. 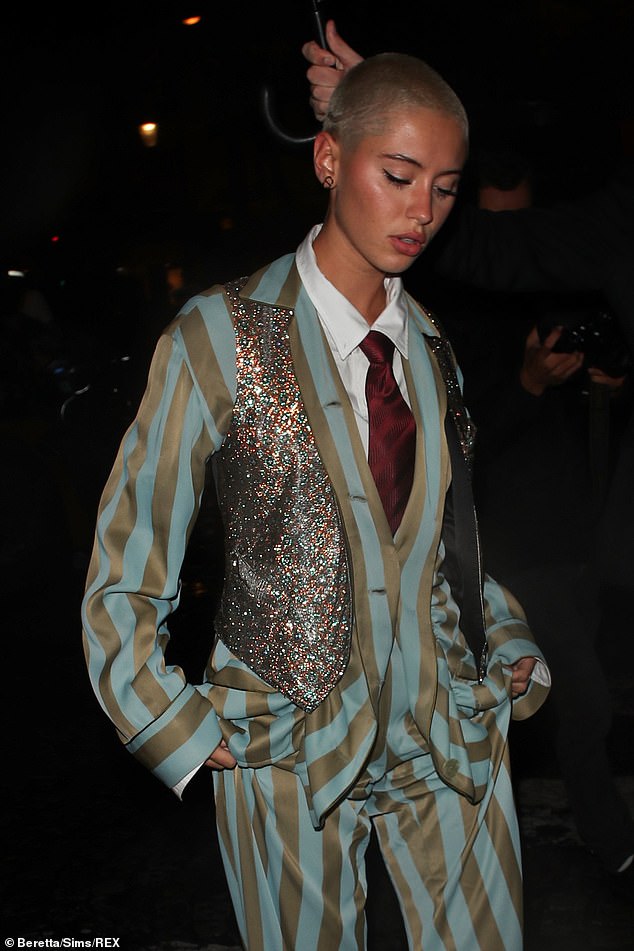 Stylish: Iris Law, 20, showed her fashion credentials when she arrived at the Vogue exhibition in the French city on Friday.

The androgynous look continued, and Iris wore a scarlet tie with a white shirt. She increased her height and wore huge black platform boots as she stepped into the venue.

Iris’ natural beauty was emphasized by a subtle makeup look complete with a neutral colored lip and a hint of black eyeliner.

The exhibition in the city celebrates the 100th anniversary of the iconic fashion magazine.

Iris’ blonde buzzcut, which she debuted in July, had an edgy pattern in the side of it. 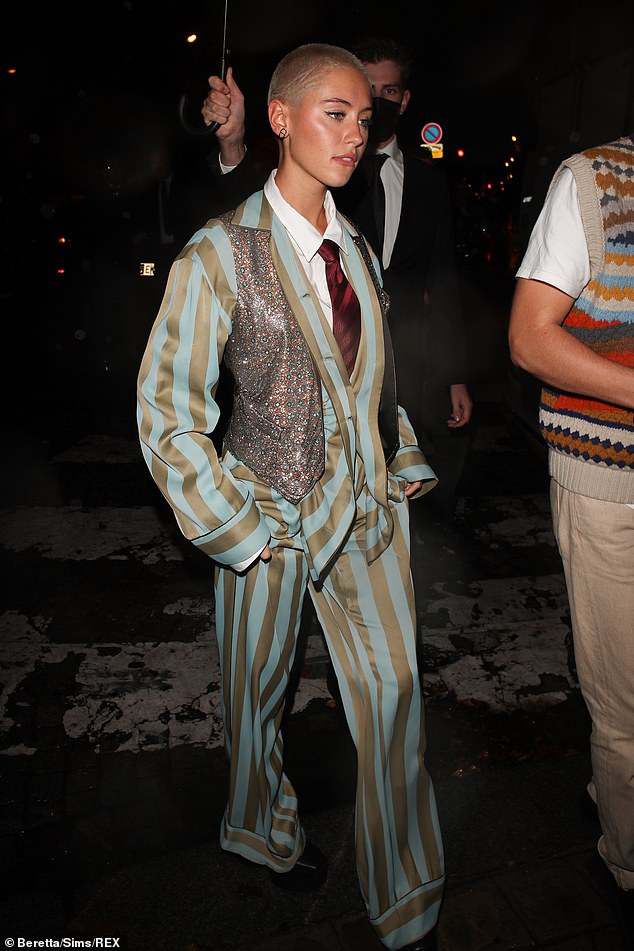 Quirky: The budding actress wore a striped green and gold oversized suit which she wore with a striking glittery cardigan

At the time, the beauty discussed with Vogue how she shaved her head for her role as Soo Catwoman in the upcoming series Pistol.

She said, “I wanted to do something that felt liberating. The day I shaved my head, I changed my life. I’ve never done anything like this.

“I looked in the mirror and thought it was going to get emotional, but it wasn’t. It felt so positive.’

Her first runway appearance was during Paris Fashion Week in 2019 for Miu Miu, part of the fashion house Prada. 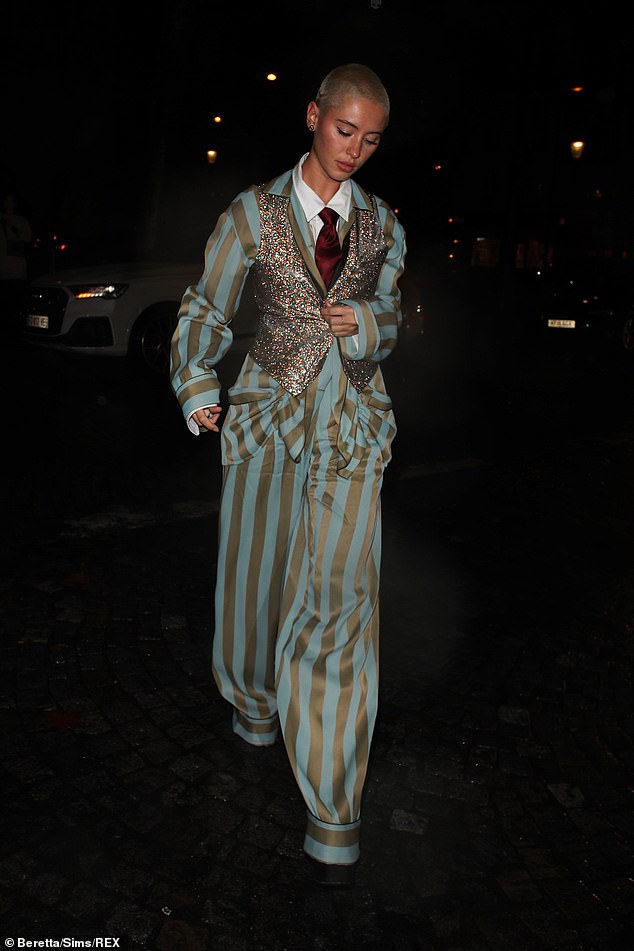 Elegant: She continued with the androgynous look and wore a deep red tie with a white shirt

Last year, in an interview with ES Magazine, Iris discussed growing up with famous parents and how she’s doing with her newfound fame.

She said her parents, who divorced in 2003 after six years of marriage, had given her the normality of her childhood despite their A-list status.

Iris explained: “My father was very young. He had all his children [with Frost] by 30. Mom too. She also had a baby face. 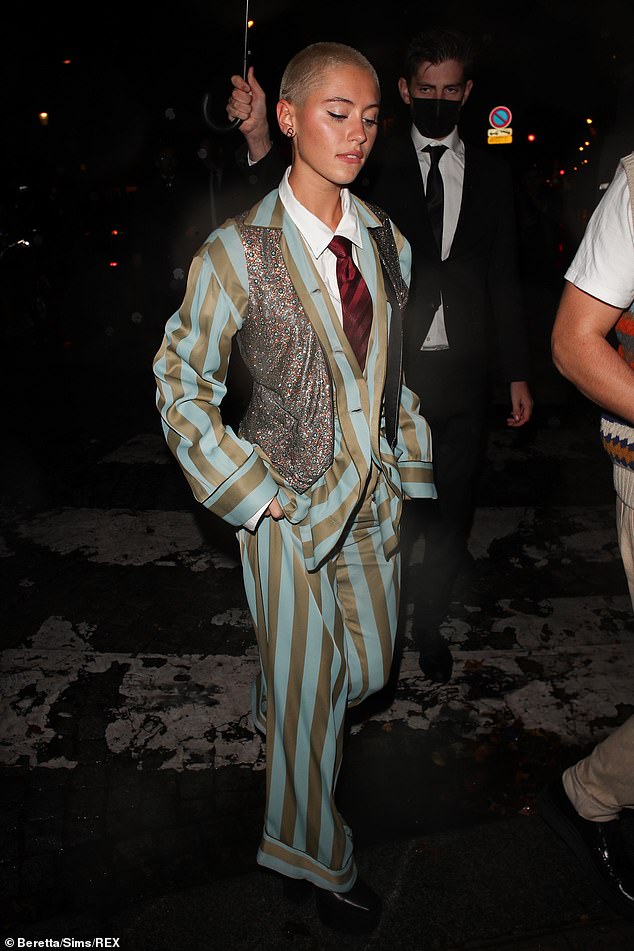 Amazing: She increased her height, wore huge black platform boots as she stepped into the venue and sported a subtle makeup look for the event

She recalled her own memories of that time eating snacks on Primose Hill, saying, “My parents weren’t rock and roll growing up, they were just my parents.

“Everyone’s parents were rock ‘n’ roll when they were young. That is not crazy.’ 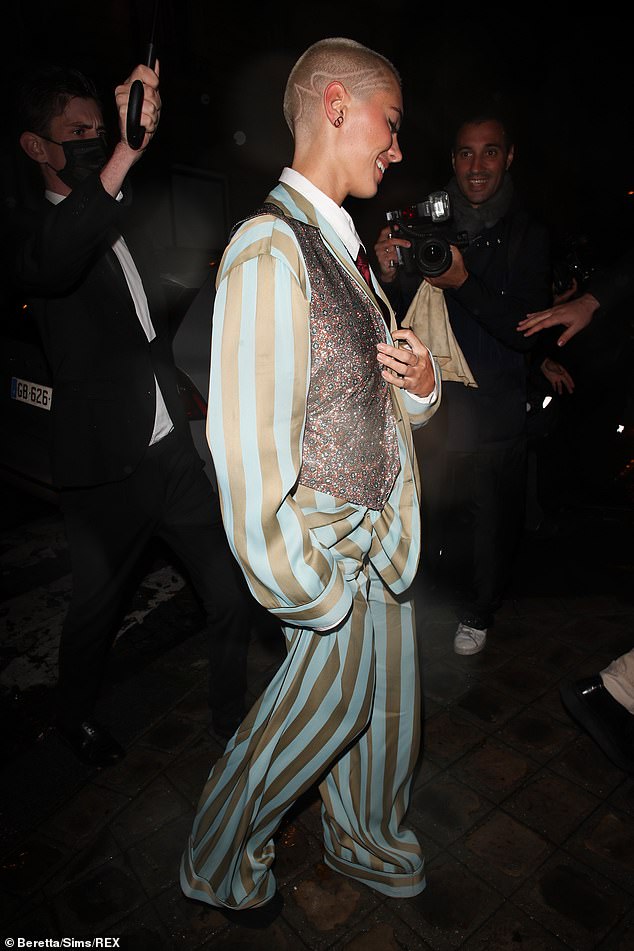 Edgy: Her blonde buzzcut, which she debuted in July, had a sharp pattern in the side of it