Mel Schilling is telling me she spent her ‘entire thirties single’. She dated, but ‘not particularly successfully’ because she was ‘the queen of self-sabotage’.

Where once it might have been a guilty pleasure, this year’s sixth series of the UK version has exploded in popularity, attracting 1.8 million viewers per episode and a witty, hugely engaged post-show audience on social media.

More even than Love Island, Married At First Sight UK promises to leave you with an expression of fascinated disbelief.

But yes, it’s true, Mel nods — she was hopeless at dating. 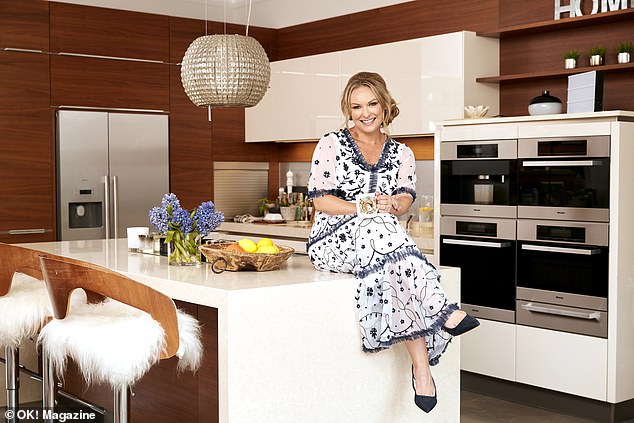 Australian relationship psychologist Mel Schilling (pictured), 49, said she spent her ‘entire thirties single’. She dated, but ‘not successfully’ as she was ‘the queen of self-sabotage’

‘For years, I was consciously selecting people [on dating sites], but choosing someone who was either emotionally unavailable or living abroad.

‘Looking back, I didn’t really want a relationship. I wasn’t ready to settle down, to make room for someone in my life… I made a lot of mistakes and learned a lot of lessons I’ve been able to pass on.’

Today, she’s happily married and mother to six-year-old Maddie, but finding love was ‘a process that only took me about ten years of trying!’.

Mel’s ascendancy to reality TV stardom began in 2015 when she joined season one of Married At First Sight Australia (also cult viewing in the UK) as part of a panel of three professional experts on love and marriage.

Yes, it’s a ridiculous concept: couples are brought together for a blind ‘marriage’, based on psychological testing and interviews, and though it’s a non-legally binding ceremony, in all other aspects the experiment mirrors the real thing with one difference — a camera follows the newlyweds for up to 11 weeks.

They are filmed living together (blazing rows and all), attending dinner parties with other couples on the series and discussing their relationship with the trio of experts at regular ‘commitment ceremonies’ until they decide whether or not to stay married.

And yet the show grips and moves us largely because it asks such universal questions. How hard should you try to make a relationship work? When do you quit? What does a successful match really require?

Of course the many explosive meltdowns — both between couples and within the group as a whole — are also part of the show’s schadenfreude-laden attraction. 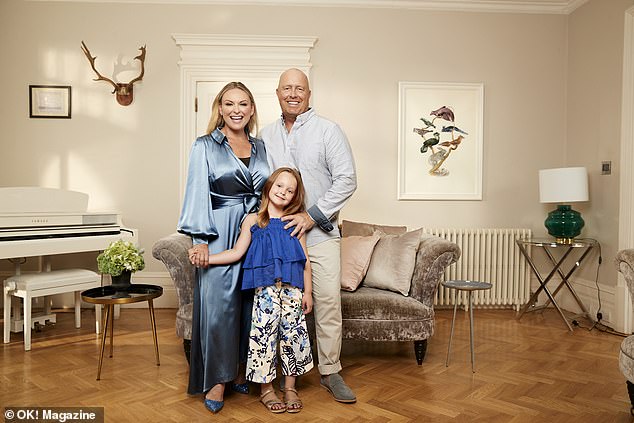 Mel is happily married and mother to six-year-old Maddie (all pictured), but finding love was ‘a process that only took me about ten years of trying’ 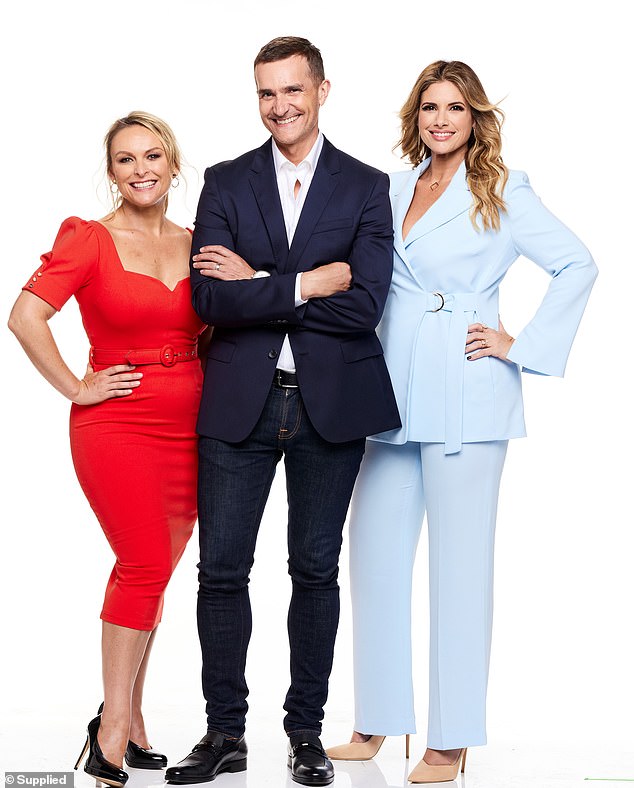 ‘The ring on the finger is just a small part of what the show is,’ Schilling agrees.

I’d also challenge anyone to watch and not, at some stage, recognise at least a sliver of their own relationship in those of the new couples.

It’s what makes the coaches’ wise insights so compelling, no matter how old you are or what stage your relationship is at.

And it isn’t just for the young, new to marriage. Older couples on the show (last year’s series featured 56‑year-old David and 47-year-old Shareen, for example) are often more interesting psychological specimens.

‘The message for everyone is that when you enter a relationship, you both bring stuff with you as adults,’ says Mel.

‘Assuming you’ve both had partners in the past, we’ve all had experiences and they won’t all be positive, especially with sex.

‘We’re muddling our way through, making mistakes. Most people have been hurt. It’s about learning to be open, transparent and accepting that a relationship is dynamic, so doesn’t stay the same.

‘By far, the most successful couples are those able to work as a team.’

That extends to basic respect and good communication, again especially around sex.

This is my number one. I know it’s often talked about for dating, but it’s just as important in long-term relationships.

And it takes work to keep that spark alive.

This might be as simple as sending a little sexy text during the day. Or even while doing the dishes, a little pat on the butt doesn’t go amiss!

Date nights are tricky when you’ve got children to take care of.

But remember, you’re intimate partners not flatmates. Stay out of the friend zone.

I recommend scheduling dates in at the beginning of the month — even if it’s just one or two — and committing to them to ensure you regularly connect emotionally and physically.

It’s easy to get very routine in your life and become a little too domestic together.

But your sex life is important — if this means scheduling it, go ahead and schedule it.

This will help you continue to relate to each other as a couple, not just as partners in life.

The odd blazing row is OK

Don’t let conflict go under the surface and bubble along for days, weeks or even months.

This is what undermines good couples. Deal with issues as they come up, then move on.

If things get too heated, take time out, then return and have an open, respectful discussion about what went wrong.

Take accountability for your part and work together to create a plan to avoid similar issues in the future.

‘It’s important for a couple to constantly talk,’ she says. ‘It’s not uncommon to be on the same level sexually [at the beginning of a relationship], but then for one person to go through something — either work stress or family stress — and find their inhibitions go up.

In terms of the show, Mel believes the couples with the best chance of making it long term are those who talk to each other about how many beans they’re prepared to spill in public.

‘At a dinner party, for me the successful ones are those who develop a little verbal contract with each other [beforehand], establishing boundaries and what they’ll talk about in a group and what they won’t.

‘They can then go their own way on the night and have separate conversations, feeling confident and safe in that trust.

‘Where trust gets broken is if one of the couple is off airing dirty laundry, which leads to embarrassment and vulnerability.’

The current UK show has shown promising signs of at least a handful of healthy couplings (such as Dan and Matt, and Adam and Tayah), though frankly the odds aren’t good.

Over six series of the UK version — and 22 couples — there’s been just one successful ‘real’ marriage: Owen and Michelle from series five, who now live together in Sheffield.

‘It’s a very inexact science’, Mel says of the premise. ‘There is no magic formula to this stuff.’

You do wonder what the majority of couples possibly get out of it, beyond five minutes of fame. Mel says many learn valuable lessons from the mistakes they make and have gone on to have happy relationships with other people in private.

‘It’s like a big personal development process,’ she claims, except it’s all played out in front of millions of armchair critics.

Shockingly, Mel herself has been on the receiving end of harsh public judgment — including death threats — as a result of show. In 2019, during the Australian version, she called out a male contestant, Bronson, for using the c-word to his partner Innes.

This was a couple in a ‘dysfunctional relationship’, she says now, and in footage she hadn’t at that point seen, Innes was verbally abusive to Bronson, too.

The Australian public, having seen how badly Innes had been treating Bronson throughout the previous week, leapt to the man’s defence and turned on Mel. ‘Everybody just piled on me,’ she tells me.

‘There was this perception that I was biased, that I was blaming somebody who was ‘the victim’, which people thought was him. That I was a toxic feminist, a man-hater. I got death threats, rape threats and 70,000 people signed a petition to remove me from the show.

‘It was really tough and had a real impact on my professional reputation. I’d say it took a couple of years [to die down], and only in the last 12 months have things started improving.’

The consequences were serious — twice, for example, she was hauled before professional peers to justify her involvement in the show.

‘Over the course of two years there were complaints to the psychologist registration board in Australia from the general public and other psychologists questioning my ethics and integrity for doing the show.

I had to have legal support and front up to a tribunal of five people in suits questioning me, not once but on two different occasions.

‘I was cleared of all complaints, but it took months and months and I was feeling so on edge. I saw there was a conflict between being a professionally-registered psychologist and being on TV.’

Forced to choose, she picked TV — and ‘stepped away’ from her professional registration.

‘A friend asked: ‘Which one would you miss the most?’ It was very easy for me.’ 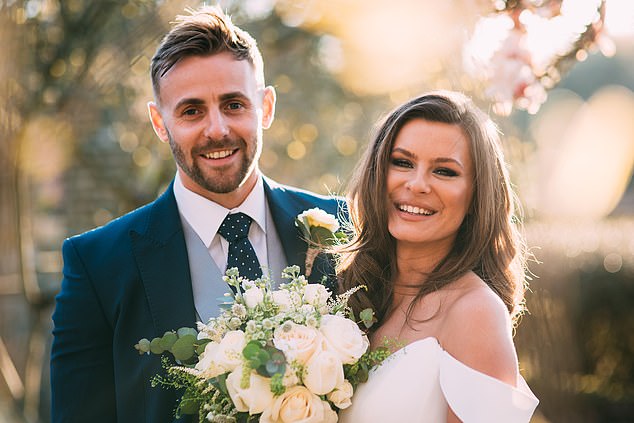 Loved up? The current UK show has shown promising signs of a handful of healthy couplings, such as Adam Aveling and Tayah Victoria (pictured), though frankly the odds aren’t good

Indeed, her TV career goes from strength to strength, as she shuttles between Australia and the UK for both versions of the show. Luckily, her husband Gareth comes from Northern Ireland, so has roots here, too.

They met in 2011 on the dating site eHarmony, while he was living in Australia, and ‘married’ in 2018 in Bali (a non-legal ceremony), formalising it last year.

‘Year on year, we get better at it,’ she says of the relationship. ‘We do travel a lot, there is a lot of change, and we are constantly having to adapt. We often ask each other: ‘OK, so where are we? What do you need? What do I need?’ ‘

Their successful courtship was built on six weeks of texting due to the distance between them (she was based in the Australian state of Victoria and he was 400 miles away in South Australia).

‘I couldn’t understand his Northern Irish accent so phone calls weren’t an option,’ she laughs.

A baby wasn’t on the cards back then. Approaching 40, Mel had reconciled herself to never becoming a mother.

‘I thought I’d accepted it and was OK with it,’ she says. ‘That’s what I was telling myself at least. But being in love, I had this drive to start a family.’

Mel became pregnant quickly, but she could barely believe it. At three months, she thought she was safe to celebrate with a shopping trip for one item for the baby.

‘It was my way of acknowledging that it had finally become real.’ But it was during that shopping trip that she began to miscarry, and ‘within 24 hours it was gone’.

‘There was lots of grief, but it only brought Gareth and me closer. We tried again for a year, then did IVF and I was so lucky — it worked first time. I had Maddie at 42.’

Mel hints that the family might relocate, at least for part of the year, to the UK.

Meanwhile, we watch enthralled to see what will happen to Marilyse and Franky, Amy and Josh, Morag and Luke, and this season’s other couples.

We love them for their ordinary, flawed, tender, couple-next-door qualities, and yet we shouldn’t forget how extraordinarily weird a situation they find themselves in. And that’s the genius of the show.

Man, 22, arrested for shooting a University of Utah soccer star at a party

George Floyd Statue in Manhattan Gets Destroyed by SKATEBOARDER