The head of the National Women’s Soccer League resigned on Friday after a high-profile coach was accused by players of sexual misconduct.

Lisa Baird, who was hired in February 2020 to run the league, stepped down a day after she was accused of not doing enough to investigate claims made against Paul Riley.

Riley, who has coached teams – mainly women’s – since the 1990s, was fired earlier on Friday over allegations of sexual harassment, sexual coercion and inappropriate comments about players’ weight and sexual orientation.

The move followed a bombshell report on Thursday by The Athletic, which details the allegations against Riley made by former players Sinead Farrelly and Mana Shim dating back more than a decade.

Baird’s resignation came after it was announced that the matches scheduled for this weekend had been cancelled, and was confirmed by NWSL

‘The National Women’s Soccer League on Friday has received and accepted Lisa Baird’s resignation as its commissioner,’ said a statement posted on NWSL’s Twitter account. 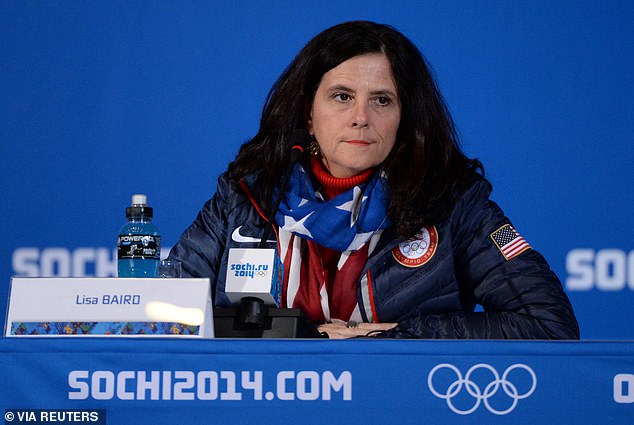 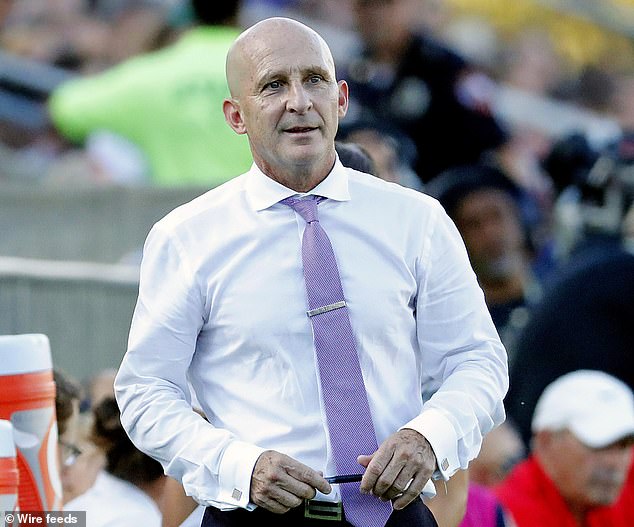 Paul Riley (pictured), the head coach of the North Carolina Courage of the National Women’s Soccer League, has been fired amid allegations of sexual harassment, sexual coercion and inappropriate comments about players’ weight and sexual orientation 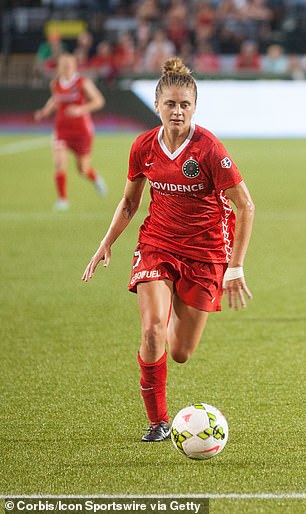 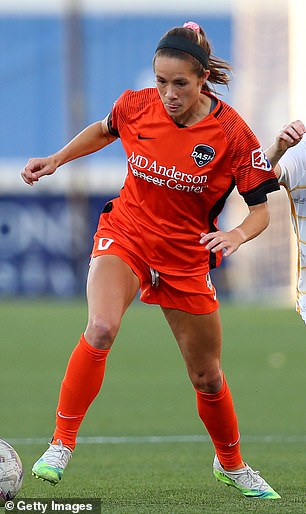 Riley’s dismissal followed a bombshell report on Thursday by The Athletic , which details the allegations made by former players Sinead Farrelly (left) and Mana Shim (right). Farrelly told The Athletic that there were multiple occasions in which she felt coerced into having sex with Riley, a decorated coach who reportedly had been considered for US national team duties. Shim, a former Thorns player, also allegedly experienced harassment, including one incident in which she says Riley asked her to kiss a teammate at his apartment on the condition that he would drop grueling conditioning exercises at the following practice

Some of the biggest names in women’s soccer expressed outrage at the league’s behavior, after Farrelly and Shim said the league ignored their concerns.

Megan Rapinoe tweeted: ‘Burn it all down. Let all their heads roll.’ 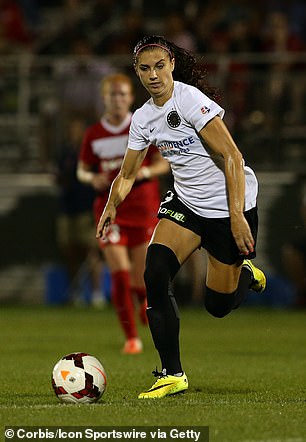 Alex Morgan, who now plays for the Orlando Pride but also played for the Thorns from 2013-15, in March led a group of players who asked the league to adopt policies to ensure safe and inclusive workplaces. The NWSL adopted its anti-harassment policy in April

She added: ‘Mana & Sinead you are so strong & we are with you.

‘To everyone in a position of power who let this happen, heard it & dismissed it, signed off on this monster moving to another team w/zero repercussions, F*** YOU, you’re all monsters,& can ALL hand your resignations in immediately.’

‘The league must accept responsibility for a process that failed to protect its own players from this abuse.’

She accompanied her tweet with screenshots of Farrelly’s email to Baird in April, asking what happened to her complaint about Riley. Baird replied saying that the matter was closed, without providing any detail.

Nadia Nadim, another NWSL star, who plays for Racing Louisville FC, said: ‘NWSL is such a joke.

‘League wants to see themselves as the best in the world but with this s*** that keeps coming we won’t be more than just a massive joke for the rest of the world.

‘The rest of the world is laughing. We’re nothing but a joke.. The players deserve more.’ 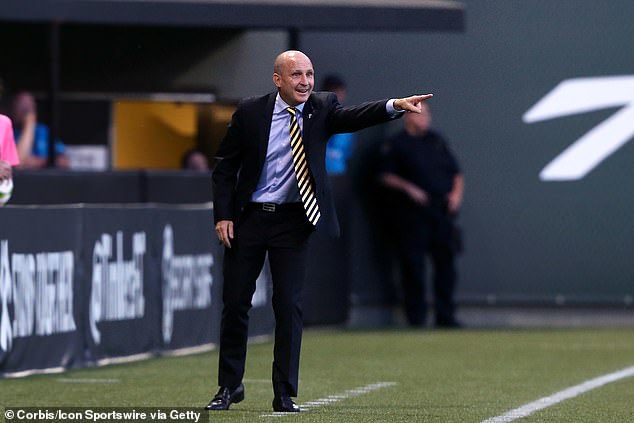 Riley, seen in 2015 while he was coaching the Portland Thorns, has denied the allegations 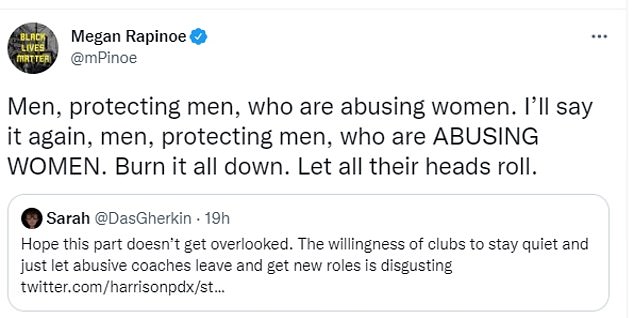 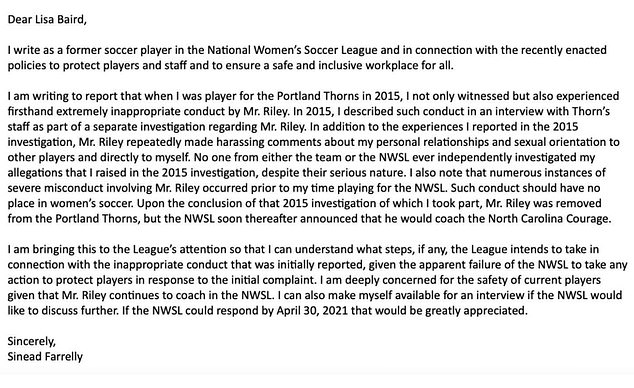 In an recent email to Baird that has since been shared on social media by Morgan, Farrelly said she reported her claims against Riley to the league in 2015, but the NWSL took no action 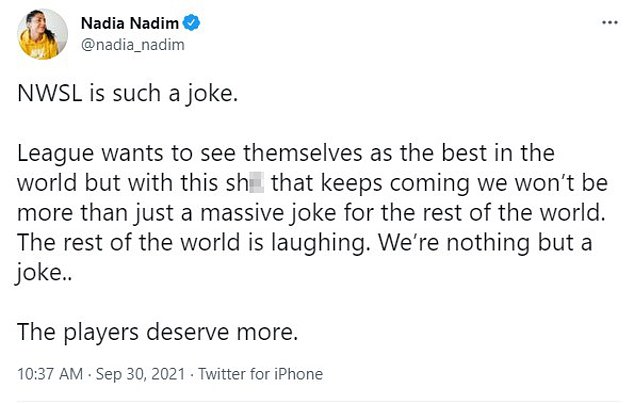 Nadim, who plays with Racing Louisville, said that the league was ‘a joke’

Both players claimed Riley often took them drinking and used those moments to pressure them into sex.

In one alleged 2012 incident, Riley, a British former professional soccer player, who was 47 and married at the time, took Farrelly and another player to his hotel room and had sex with both of them.

Riley’s refrain, which Farrelly said she often repeated to herself after having sex with her coach, was that they would be ‘taking this to their graves.’

Riley, now 58, told The Athletic the allegations were ‘completely untrue.’

‘I have never had sex with, or made sexual advances towards these players,’ Riley told The Athletic.

He said that he picked up occasional bar tabs for his players and socialized with them, but never took them out drinking.

The alleged harassment of Farrelly started in 2011 when she was a player with the Philadelphia Independence of the Women’s Professional Soccer league. 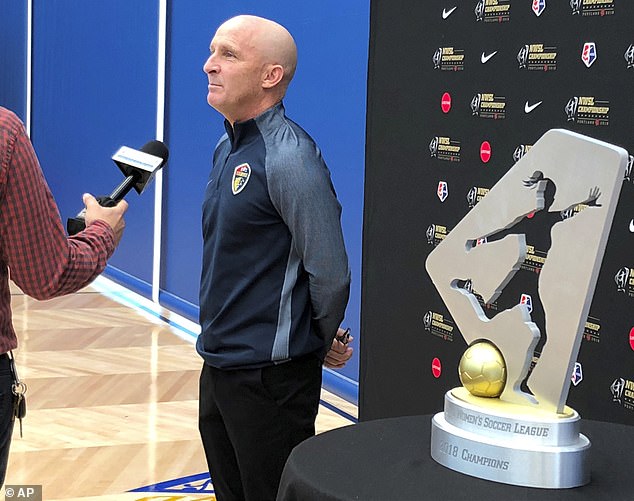 Riley is seen in September 2018, being interviewed as coach of the North Carolina Courage

Farrelly told The Athletic that there were multiple occasions in which she felt coerced into having sex with Riley, a decorated coach who reportedly had been considered for US national team duties.

Farrelly said the abuse continued when Riley coached her with the Portland Thorn of the NWSL.

As she explained, Farrelly felt manipulated by Riley, who praised her talent to the media, but routinely threatened to demote her to a bench role.

Riley’s underlying message, according to Farrelly, was that she could become a great player, but needed him to make that happen.

​​’He really ingrained in my brain that I had a lot of potential, was one of the best players he’d ever seen — but I needed the right coach to get me to where I wanted to go,’ Farrelly told The Athletic.

‘And that’s what he did, he took players and he made them great.’

Farrelly told the website that the abuse continued when she was with the Portland Thorns of the NWSL, but the two never had sex during his tenure there.

Instead, when Farrelly began dating a teammate, Riley allegedly started making comments about her relationship, saying she was ‘too hot to be a lesbian.’

‘I would have these daydreams about getting hurt and not having to play again,’ Farrelly said.

Shim, a former Thorns player, also allegedly experienced harassment, including one incident in which she says Riley asked her to kiss a teammate at his apartment on the condition that he would drop grueling conditioning exercises at the following practice.

‘I felt from the beginning like I owed him,’ Shim told The Athletic. 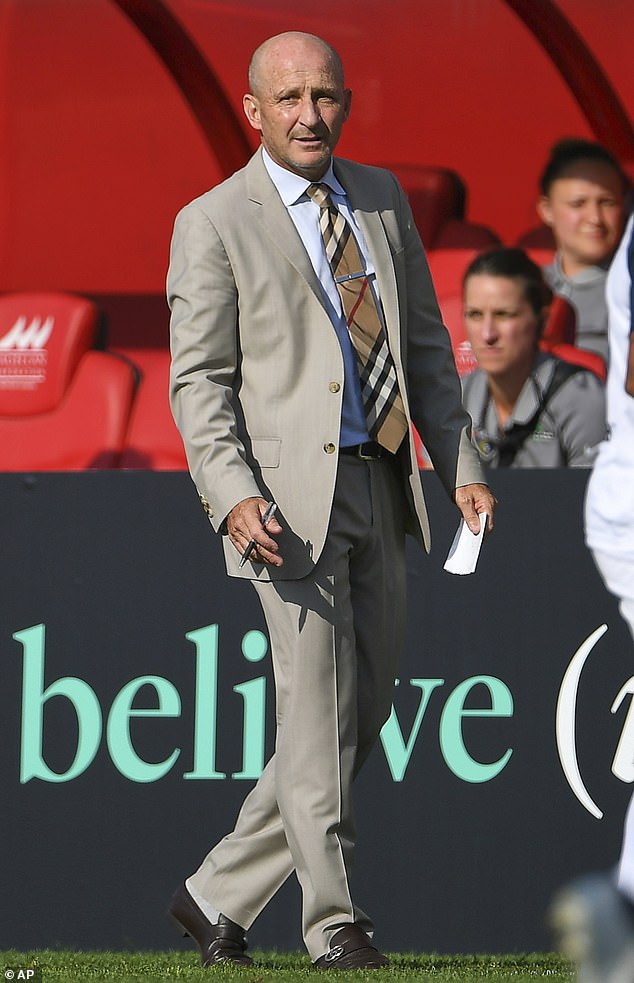 Both women are no longer playing in the NWSL.

After he was dismissed by the Thorns, he became head coach of the Western New York Flash for a season before the team was sold and moved to North Carolina.

The Thorns investigated Riley while he was with the team and reported the findings to the league.

‘While the findings did not show unlawful activity, they did uncover clear violations of our company policies. Based on this, we chose to sever ties with Riley,’ the Thorns said in a statement.

The statement also said: ‘The article is a difficult read and there are some horrifying revelations. We have grown since 2015 as an organization and will continue to seek to improve and get better.

‘We will fully cooperate with any additional inquiries into this matter and, more importantly, re-examine our own processes and protocol that are intended to ensure a safe space.’

The league, in its ninth season, is also mandating that anyone who interacts with players participate in training with SafeSport and be subject to background checks and additional screening.

US soccer said it is suspending Riley’s coaching license.

‘US Soccer is in communication with the NWSL as they review this matter and will work with them to ensure meaningful steps are taken to ensure a safe and supportive environment across the league,’ the federation said.

The Courage released a statement on behalf of team owners, the staff and players commending the women who came forward.

‘The North Carolina Football Club is united together in our commitment to creating a safe, positive, and respectful environment, not only within our club but across the league and our great sport,’ the statement said.

The Courage appointed assistant Sean Nahas as interim head coach for the remainder of the season.

The league has been rocked by several recent scandals involving team officials.

Washington Spirit coach Richie Burke was fired after a Washington Post report detailed verbal and emotional abuse of players. The league formally dismissed Burke and sanctioned the Spirit on Tuesday after an independent investigation.

Gotham FC general manager Alyse LaHue was fired in July after an investigation connected to the league’s anti-harassment policy. She has denied any wrongdoing.

Racing Louisville coach Christy Holly was fired earlier this month but the reasons for his dismissal were not made public.