A string of deaths has heightened fears that cancers and other illnesses are being missed because of the rise of phone and video consultations.

Before the pandemic around 80 per cent of GP appointments were in person. But the figure was just 57 per cent in July despite life returning to normal.

In some regions, just 45 per cent of consultations are face to face – even though most adults are now double jabbed. A senior coroner warned this month that not seeing a doctor in person may have contributed to the deaths of five people across Manchester.

Lisa King, who lost her husband Peter after a GP denied him an in-person appointment, said: ‘I hope this Daily Mail campaign can make a difference because I never want another wife, husband, son or daughter to have to go through what me and my two sons are going through.’

Arun Ghosh, 42, a GP partner in Liverpool, says virtual consultations are no replacement for a ‘hand on the tummy or listening to someone’s breathing’.

In today’s Mail he writes: ‘Many GPs, especially locum and salaried doctors, who are not partners in a GP surgery, now prefer remote appointments.’

He said: ‘I am committed to ensuring everyone, no matter who they are or where they live, can choose to see their GP face to face and I am grateful to the Daily Mail for launching this campaign.’

The low level of face-to-face appointments comes despite official NHS guidance telling surgeries to offer in-person consultations if patients wanted them, unless there were good clinical reasons, such as Covid symptoms.

Many family doctors argue that phone or video appointments via Skype or Zoom allow them to handle more patients in a typical day.

Doctors’ leaders also argue a long-standing GP recruitment crisis has made it harder to see everyone in person.

But others believe the pendulum has swung too far and that it is vital to get back to pre-pandemic levels of face-to-face appointments so that fewer serious conditions are missed.

And campaigners say it is often the vulnerable or elderly who lose out by not being able to see their family GP as they normally would.

The Mail is demanding action from ministers and the medical authorities to ensure the proportion of appointments carried out face to face is radically improved.

This newspaper is also calling for action to ensure there is no postcode lottery in the system and for the Government to deliver on its pledge to recruit 6,000 more GPs.

Dennis Reed of Silver Voices, a campaign group for the over-60s, is pressing for patients to have a legal right to ‘face-to-face GP appointments’.

His petition on an official government website has more than 16,000 signatures, and a survey of more than 500 elderly people by his group in May found 71 per cent had struggled to obtain an in-person appointment with a GP.

Mr Reed said: ‘Primary care is not a welcoming service any more. If you can get through to your GP surgery on the phone, you’ll be interrogated by a receptionist and have to jump through so many hoops to get an appointment.’

Caroline Abrahams, of the charity Age UK, called for increased resources for GP practices to enable them to carry out more in-person consultations.

And Gavin Terry, of the Alzheimer’s Society, said: ‘Virtual GP appointments cannot become the norm for everyone with dementia, as many people experience communication issues, and their true condition might not be picked up.’

Alison Cook, who works for Asthma UK and the British Lung Foundation, said that most asthma sufferers have told them they prefer face-to-face care.

An NHS spokesman said last night: ‘Every GP practice must provide face-to-face as well as telephone and online appointments.’

4) Urgent action to ensure the Government delivers on its election promise to recruit 6,000 more GPs and provide 50million more appointments a year

5) If necessary, pharmacists or nurses based at GP practices should receive extra training so they can ease burden on doctors and help with face-to-face cases 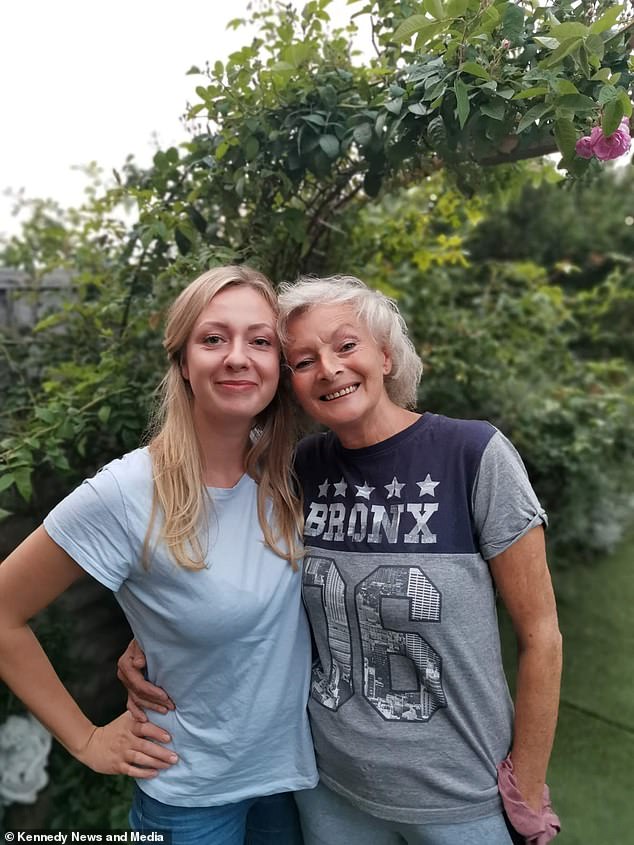 Marina Sendall’s (L) mother, Ellie Krzywy, 62 (R), was ‘fobbed off’ by her GP surgery, which did not want doctors to see patients face to face during the pandemic. Despite telling her family doctor she had a persistent cough and felt breathless in two phone consultations, Mrs Krzywy was not sent for an X-ray but was instead prescribed antibiotics for a chest infection

The daughter of a woman who died of lung cancer months after being refused an appointment with her GP said: ‘Nobody will ever know if she could have been saved.’

Marina Sendall’s mother, Ellie Krzywy, 62, was ‘fobbed off’ by her GP surgery, which did not want doctors to see patients face to face during the pandemic.

Despite telling her family doctor she had a persistent cough and felt breathless in two phone consultations, Mrs Krzywy was not sent for an X-ray but was instead prescribed antibiotics for a chest infection.

Eventually, the cleaner’s condition became so bad that Mrs Sendall decided to take her to A&E herself. Doctors there X-rayed her chest and – after seeing something suspicious – referred her for more tests.

A week later, in August 2020, they delivered the devastating news that Mrs Krzywy had terminal lung cancer and only six months to live. She survived for longer before dying in May. Heartbroken Mrs Sendall, 34, told the Mail the GP who refused to see her mother had ‘robbed’ the family of precious time together.

The retail administrator said: ‘Covid was used as an excuse not to see her. It was impossible for my mum to get an appointment. She told them she had the cough for a few months but they still prescribed antibiotics over the phone. She should have been sent for an X-ray sooner.

‘My mum had an aggressive form of cancer. Who knows if she could have survived? No doctor can tell us that – but she would have had more time.

‘Instead the day she was diagnosed she had to start treatment straight away otherwise she would have had weeks [to live]. We would still have been waiting for the GP had I not taken her to A&E.’ 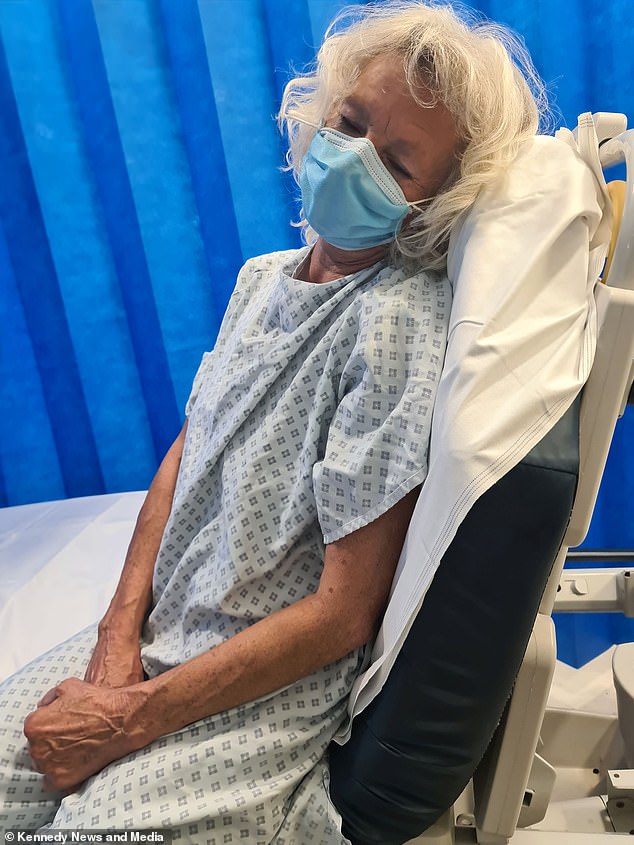 In August 2020, they delivered the devastating news that Mrs Krzywy had terminal lung cancer and only six months to live. She survived for longer before dying in May. Heartbroken Mrs Sendall, 34, told the Mail the GP who refused to see her mother had ‘robbed’ the family of precious time together.

Mother-of-three Mrs Sendall added of the diagnosis: ‘We cried for four days straight after hearing the news – it was awful.

‘To hear she’d been suffering all those weeks with cancer was terrible. The Daily Mail campaign can only be a good thing.

‘Sadly, there are plenty of stories like my mum’s out there.

‘Somebody has to force the Government to do something. The past year has been a nightmare.

‘I was very close to my mum and I never thought I could survive losing her, but I’ve got three children myself so I’ve had to keep going for them.’

Distraught Mrs Krzywy, of Gloucester, had told of her ‘disappointment’ at not being able to get an appointment with her GP. She said at the time: ‘I felt completely helpless. I’m in shock that I have so little time left.’ 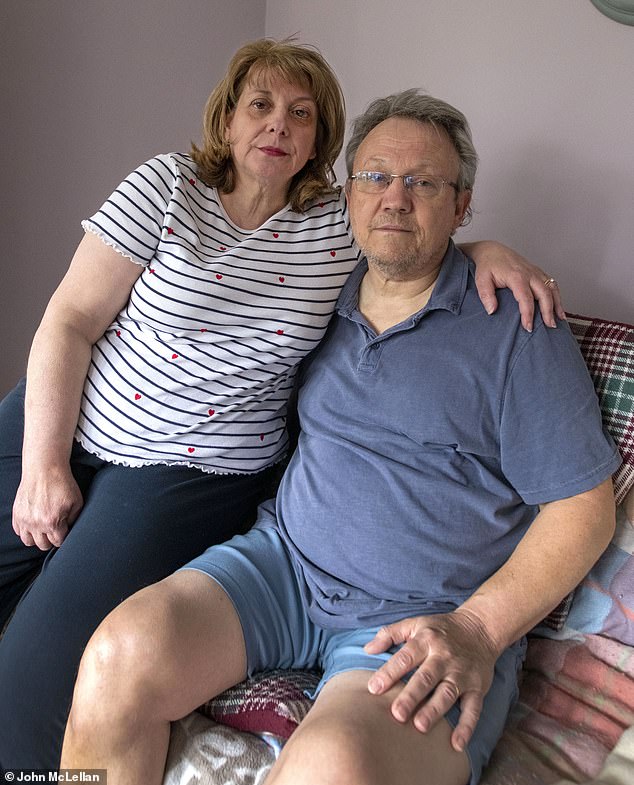 Lisa King, 55, sobbed as she told how she lost her beloved husband Peter after his GP denied him a face-to-face appointment. She said the 62-year-old retired taxi driver’s death had been ‘tragic and avoidable…just completely unnecessary’

A heartbroken widow hailed the Mail’s campaign yesterday and vowed: ‘If that doesn’t move them into action then they’ve got hearts of stone.’

Lisa King, 55, sobbed as she told how she lost her beloved husband Peter after his GP denied him a face-to-face appointment. She said the 62-year-old retired taxi driver’s death had been ‘tragic and avoidable…just completely unnecessary’.

Mrs King insisted: ‘It should never have happened. Every night I cry myself to sleep and when I unfortunately wake up – I say unfortunately because I just want to be with him – I weep again. If it wasn’t for the fact we have children, I wouldn’t be here now – that’s how broken I am.’

Mr King, of Brentwood, Essex, complained of pain in his stomach in July last year. His wife emailed their GP asking for a face-to-face appointment because she was worried it was cancer.

After a phone appointment, Mr King’s GP said he had acid reflux and prescribed medication, telling him to call back in a week if it had not improved.

Mr King was taken to hospital six days later and doctors removed a gallstone in his bile duct. It is thought the delay in treatment and going into hospital saw Mr King’s iron levels rise and damage his heart.

He had a heart attack four weeks after leaving hospital and died last October.

Mrs King said: ‘You can’t diagnose something like that over the phone. He passed away and it was all a result of not seeing his GP.

‘Our family has been torn apart by the incompetence and neglect. On September 30, 2020, Peter and I celebrated our 21st wedding anniversary. Nine days later, I was a widow at 55 and our two sons aged 21 and 19 will forever miss asking their dad for fatherly advice and sharing their experiences with him.’

She added: ‘No one goes to a GP because they have nothing better to do. They need treatment – there’s something wrong…Patients are losing trust in their doctors. They need to regain the public’s trust by seeing people face to face.

‘It seems as though GPs can do what they like. They can ignore patients, ignore the Health Secretary, the British Medical Association…They are a law unto themselves.

‘I hope this Daily Mail campaign can make a difference because I never want another wife, husband, son or daughter to have to go through what me and my two sons are going through.

‘Let them read Peter’s story. And if that doesn’t move them into action then they’ve got hearts of stone.’ 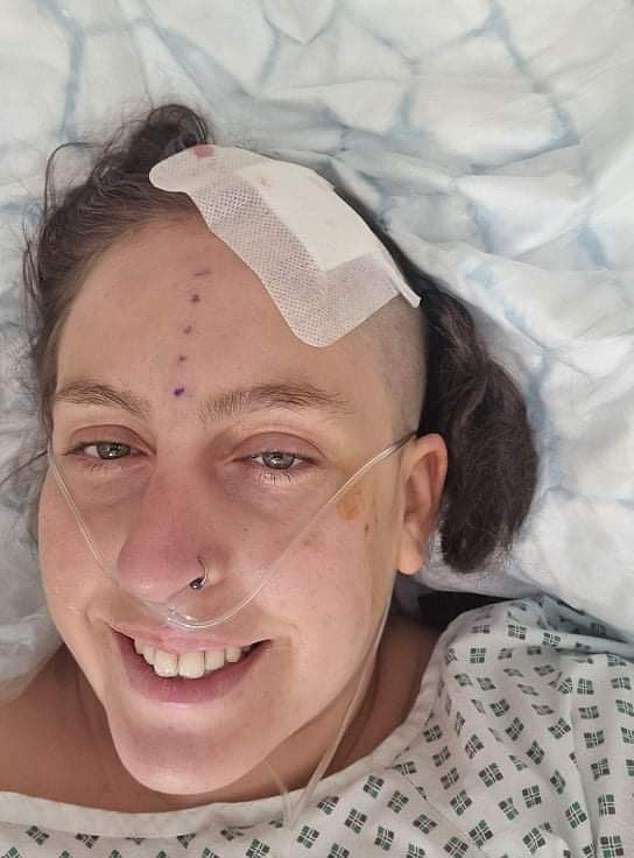 Katie Lee, 30, a painter and decorator is recovering in the James Cook Hospital in Middlesborough after emergency surgery. She says: ‘I’ve been trying to get a face to face appointment with a doctor or a consultant for over a year but have been fobbed off with phone calls or online forms.’

A woman had to undergo emergency surgery – after trying to get a face-to-face appointment with her doctor for more than a year.

Painter and decorator Katie Lee, 30, of Hartlepool, suffers from high pressure in her brain. She said since the pandemic started ‘it’s been impossible to get anyone to see me’. She added: I’ve been in terrible pain at times – as if my head is in a vice and someone is stamping on me.

‘I’ve tried getting through to my GP over and over but they don’t seem interested and kept putting me through to the hospital.

‘The pressure was becoming worse and worse. My vision was going. A simple eye examination could have shown something was seriously wrong.’

She eventually saw a GP and later found out ‘I was only a cough or a sneeze away from having a stroke’.

Miss Lee said after the surgery ‘I can see again – but I feel like I’ve been hit by a bus’.

She called the GP service a ‘nightmare’, saying: ‘Every appointment has been over the phone and it’s not good enough.’