Two U.S. Capitol officers were charged with “seemingly staring at TV” instead of helping their colleagues during the Jan. 6 Capitol riot.

In a 16-page letter addressed to members of the House and Senate on Sept. 28, a whistleblower denounced the actions of Assistant Chief Yogananda Pittman and Acting Assistant Chief Sean Gallagher.

The whistleblower claimed they sat in the control room doing nothing while the Capitol was besieged and their fellow officers were injured or even killed.

“They did not try to help or assist while officers and officers were literally fighting for each other, their lives and Congress,” the anonymous complainant wrote.

“What I saw was that they were sitting there most of the time, blankly staring at the TV screens showing real-time images of the officers and officials fighting for Congress and their lives,” said the former department official, who said she was a spent much of the time in the command center. the attack, wrote.

It also claims the pair did not share crucial information about the riots, which they received the month before the siege, and allegedly “changed the paradigm from that day.”

The whistleblower, who has reportedly been employed by the department for more than 30 years, said the couple had not even suffered the consequences of allegedly evading their duties.

‘Their failures are marginalized, negligibly researched’ [and] categorically underreported,” claimed the whistleblower, who said they were working in the Capitol on the day of the Jan. 6 “Stop the Steal” protests.

“Without justification… they have been returned to the exact same positions as if they were not responsible for the greatest intelligence failure in US history.” 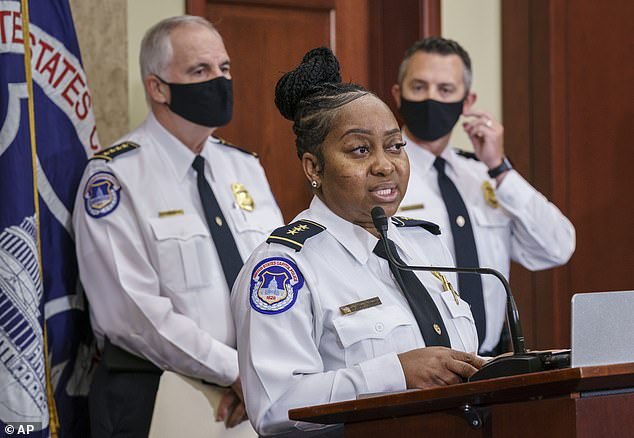 The whistleblower accused head of protective and intelligence operations Yogananda Pittman, center, and acting assistant chief of uniformed operations Sean Gallagher, right, of failing to share vital information with other police leaders and not act to assist officers when the violence began on Jan. 6. during the Capitol Riots 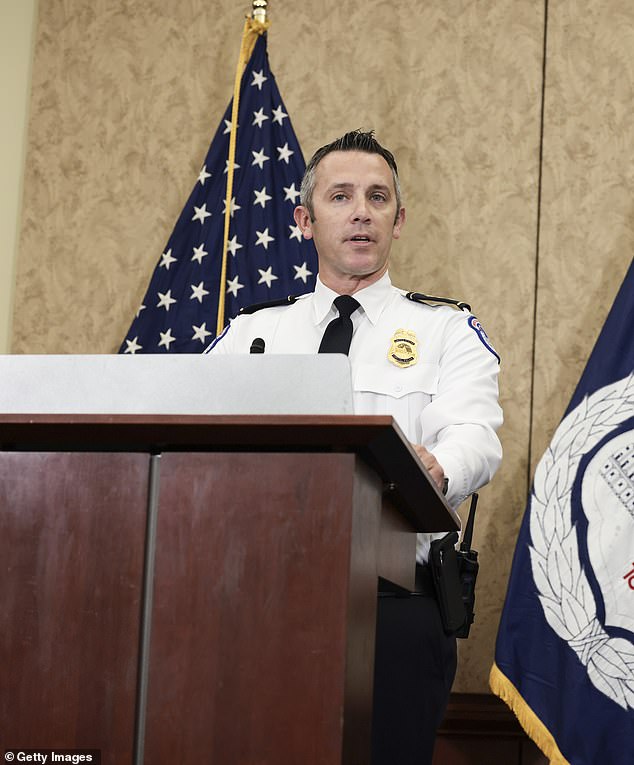 Reportedly, Assistant Chief Sean Gallagher (pictured) and Chief Yogamana Pittman did not share intelligence information with other members of the department, which the whistleblower said “would have changed the paradigm of that day.” 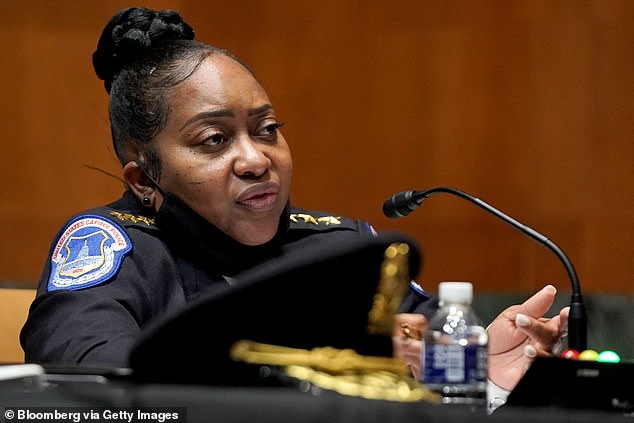 The writer said Pittman lied to Congress about a piece of information received by the Department in late December — that a blog called “thedonald.win” posted a map of the Capitol, and that forum members encouraged each other to bear arms. and use them to confront politicians. She is pictured as a witness for the body in April

While the letter addresses other topics in the Senate Judiciary Committee’s reports on the insurgency, the letter primarily focuses on the two department leaders — accusing some congressional leaders of “deliberate failure.”[ing]’ to tell the truth to protect that leadership.

The writer also said that Pittman lied to Congress about information the department received in late December — that a blog called “thedonald.win” posted a map of the Capitol, and that forum members encouraged each other to bear arms and to confront politicians.

Pittman told Congress that other members of the U.S. Capitol Police department had been briefed on the forums, but the alleged high-ranking tipster said other officials of the department had not received the intelligence report.

“The single most important piece of intelligence information … was never shared with members of the USCP leadership,” the whistleblower wrote, asking, “Why did they approve the operational plan for the 6th if they knew the intelligence?” 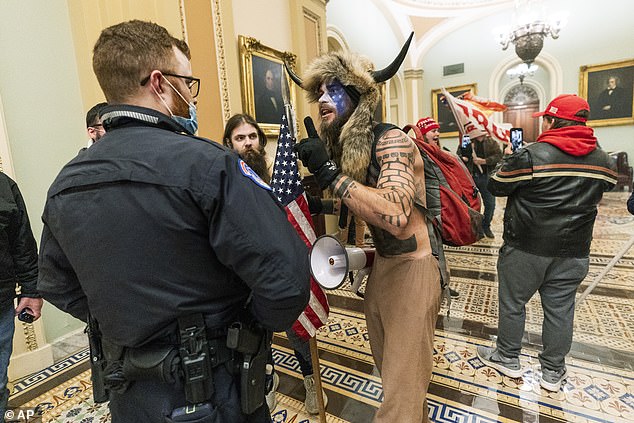 “Without accountability… they have been put back in the exact same positions as if they were not responsible for the biggest intelligence failure in US history,” the whistleblower wrote. 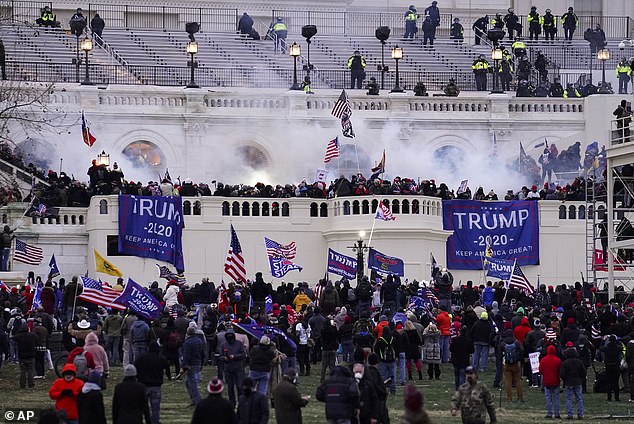 “They were not trying to help or assist as officers and officials were literally fighting for each other, their lives and Congress,” the anonymous complainant said. 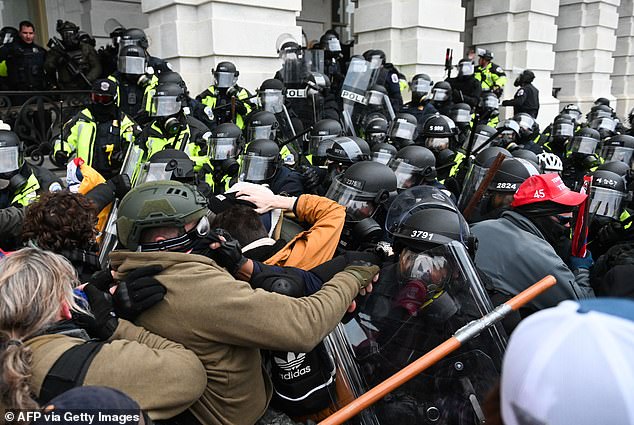 Gallagher and Pittman reportedly had information that the permits obtained for that day to hold events around the Capitol were actually all obtained by Stop the Steal under the names of shell organizations. Pictured are Stop the Steal protesters on January 6

Gallagher and Pittman also had information that the permits obtained for that day to hold events around the Capitol were actually all obtained by Stop the Steal under the names of shell organizations.

Since the unprecedented attack on the Capitol, the department has made lightning-fast changes that are under scrutiny — all regular officers, for example, get daily intelligence alerts sent directly to their cell phones.

In a statement to CNN, the Capitol Police executive team said that “a lot has changed since Jan. 6… [though] there is more work to be done, many of the issues described in the letter have been resolved.

USCP leaders, led by new Chief Tom Manger, are determined to learn from past mistakes and protect our brave officers, who fought valiantly on Jan. 6, so we can continue to carry out the department’s critical mission. the explanation.

“The men and women of this department are committed to that crucial mission. Our goal is to work as a team, move forward and advance the work that keeps the US Capitol and the people who work here safe.”

A month after the January 6 attack, both Pittman and Gallagher were still in the leadership of the force, and received a vote of “no confidence” from members of the division.

The vote by the department’s union was intended to express dissatisfaction with the leadership and signaled the USCP officers’ deep frustrations with management.