Father, 43, who eats red meat before EVERY meal, warned he is headed for an early grave

A father who ate red meat for every meal has been forced to change his eating habits after being warned his diet could send him to an early grave.

Kevin, 43, from Somerset, started having problems eating at the age of three and had not touched a vegetable since childhood. He indulged in sandwiches with pulled pork, ribs and bacon seven days a week.

His health had already been affected by his diet, with the father revealing that he developed diverticulitis after food got stuck in his gut, which “nearly killed him.”

In an effort to address his issues, the father appeared on Extreme Food Phobics, which airs Wednesdays on W, where host Dr. Ranj warned that he could consume up to three times the recommended amount of meat per day. 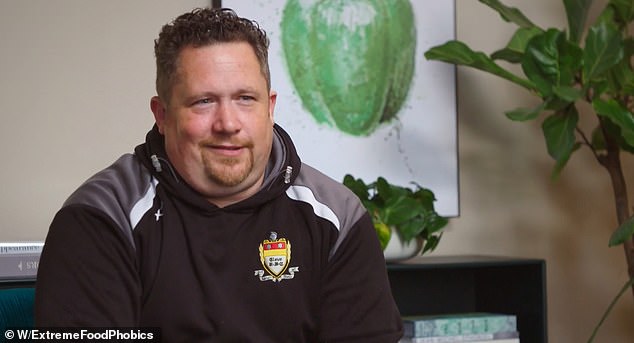 Kevin, 43, from Somerset, started having problems eating at the age of three and had not touched a vegetable since childhood. In an effort to address his issues, the dad appeared on Extreme Food Phobics, airing tonight on W 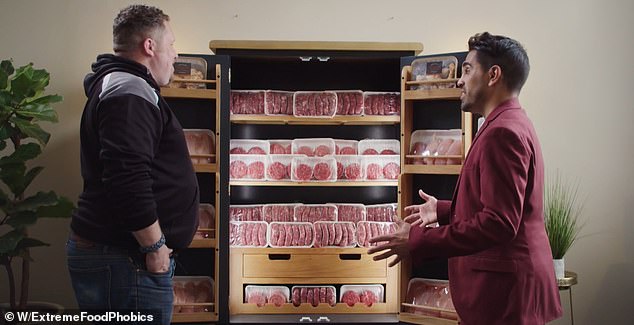 “My diet generally consists of a lot of meat,” says Kevin. ‘I like cooking big joint, pulled pork on the BBQ or spare ribs, or just something as small as a bacon sandwich.’

His brother Mark added: “You can’t get Kevin to eat something green or something healthy. It hasn’t been very varied since day one. Even as a child it was spaghetti bolognaise, Weetabix or nothing else’.

Kevin admitted that his children Lauren, 11, and Alex, eight, have both become “really picky eaters,” which he says is due to his own habits.

“I always thought, ‘They don’t have these habits of mine’ — I think they do,” Kevin said. I remember when I was seven or eight and said “I don’t like it” and they said the exact same things I did. 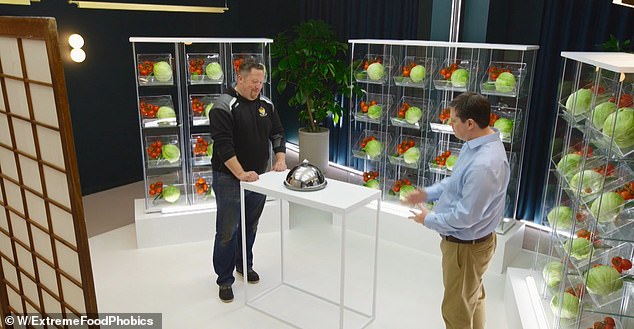 The first step in Kevin’s rehabilitation is aversion therapy with Anthony Tait, a leading food phobia expert, who leads him into a room full of vegetables, with a plate of avocados under a serving platter. 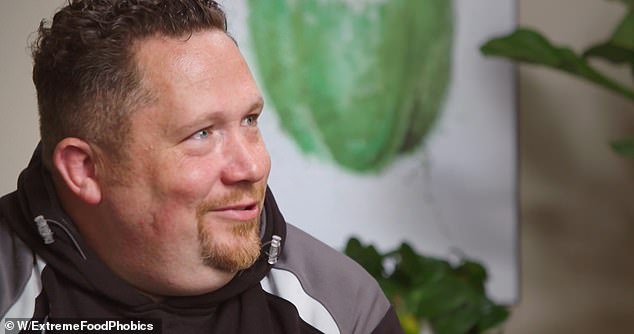 “If I could eat a balanced meal, I know it would make a big difference in my life,” Kevin said in a candid conversation with Dr. Ranj

‘What I would like is to eat less meat, eat healthier and be a better role model for my children.’

Kevin added that his diverticulitis brush was an “alarm bell,” saying, “I need to change my lifestyle.”

“If I keep going like this, there’s a good chance I’ll die one day, my cards are marked,” he said.

Bowel Disease Is More Common Than IBS In Adults: What Is Diverticular Disease And Is It Dangerous?

Diverticular disease occurs when pouches form on the lining of the colon.

The pouches occasionally occur in the small intestine and in rare cases elsewhere in the intestine.

The condition affects between 30 and 50 percent of people in the Western world, but about 75 percent never develop symptoms.

Diverticular disease is caused when there is a weakness in the muscle of the intestinal wall.

This leads to the inner layer penetrating and forming a pouch.

Patients with diverticular disease usually don’t eat enough fiber, making their stools hard and small instead of soft and bulky.

This means that the gut has to work harder to push the stool along.

And these contractions create a high pressure in the gut, which gradually weakens its lining.

Untreated diverticular disease causes infection in about 10 to 25 percent of patients.

This happens when a piece of hard stool gets stuck in one or more of the pouches.

Scar tissue can also form around an inflamed pouch, narrowing the colon and leading to a blockage.

If a pouch bursts, it can lead to the serious condition peritonitis – inflammation of the thin layer of tissue in the abdomen.

Medication may also be prescribed to soften the stool.

Surgery is usually only needed if the abdomen is infected or if there is widespread inflammation of the colon.

The surgery usually involves removing the part of the bowel that has an affected sac.

“I’m now getting to the age where it’s affected my health and I see it wearing off on my son and that’s when I realize I need to make some changes.

“With my son Alex I see it getting worse and maybe I feel like I’m to blame. I’m not just here for myself, but I really want to do this for my son.

“I never want to hurt my kids and maybe I do, by accident. I need to break the habit a bit and find comfort in food that isn’t meat.’

Mark added: “It’s all very disturbing for everyone involved because someone so young shouldn’t have any problems, they should be enjoying themselves.”

Kevin, who said tomato, celery, cucumber, and avocado is his idea of ​​”hell,” sat down with Dr. Ranj for a candid talk about his health – where he warned that the father had an increased risk of cancer, heart attacks and strokes due to his diet.

‘Processed meat, and possibly also red meat, increases your risk of colon cancer,’ he explains. ‘There are chemicals that occur naturally in red meat that can directly damage cells.

“Some of the preservatives added to it can be carcinogenic, if you cook some of this meat you create things like heterocyclic amines and they can even damage your gut cells.”

‘Just 25 grams of processed meat, ie a slice of ham or a slice of bacon, demonstrably increases the risk of colon cancer.

‘It’s actually recommended to limit your meat intake to about 70 grams per day, I think you probably eat 70 grams per meal. We know that colon cancer, especially among men, is a major problem.

“I haven’t even talked about what your heart is saying right now — it’s going to put you at risk for things like a hearing attack, stroke, things like that in the long run, it’s a problem.”

“If I could eat a balanced meal, I know it would make a big difference in my life,” Kevin said.

The first step in Kevin’s rehabilitation was aversion therapy with Anthony Tait, a leading expert on food phobia, who took him to a room full of vegetables, with a plate of avocados under a serving platter.

Despite feeling ‘terrible’ at the sight of the vegetable, Kevin managed to try a slice of avocado but was immediately disgusted by the food and kept insisting, ‘That’s not tasty.

‘That’s really not tasty, really tough, chewy, that taste won’t go away, it’s hard to swallow. That’s not pleasant, but the hard truth is that I have to eat healthier.’

Next up in the therapy course was hypnosis with the help of food aversion hypnotherapist Jackie Fraser, who began the session by saying, “Sometimes when something isn’t right, or you’re afraid of something, there are energies that aren’t right.” run in sync.’

Kevin then went on a course of tap therapy, in which the hypnotherapist addressed Kevin’s subconscious while tapping acupressure points on his face.

Addressing the father’s subconscious, she said, “Think about the problem, think about this unhealthy habit of eating way too much meat and everything it does to shorten your life, shorten your time with your son.”

After tasting his first salad in years after the therapy session, Kevin’s last challenge was the banquet with his brother, where he sampled chicken and bacon salad, potato salad, and beetroot.

“The things I’ve learned from this are actually quite manageable. I could definitely expand my palette and expand my life a little bit by eating healthier,” Kevin said.

‘It hasn’t sunk in yet. I’m getting a little healthier, a little thinner, a little happier. Maybe I’ll start to believe in myself a little more.’

Four weeks later, Kevin revealed how he regularly ate cauliflower, peppers and tomatoes, insisting, ‘The reassurance that it’s not terrible got me thinking, maybe it wasn’t as bad as I thought it was’.

Tokyo Lamington in Sydney makes charcoal and PUMPKIN lamington for…