Eurocrats eye ‘EU army’ could activate up to 5,000 troops without full support from member states

Eurocrats eye on ‘EU army’ that could activate up to 5,000 troops without full support from member states

Eurocrats are planning a 5,000-strong ‘EU army’ that can be activated without unanimous support from member states.

Controversial proposals in draft documents outline the creation of a military force by 2025 that could be sent into battle without the approval of all 27 EU governments.

Officials could “quickly deploy a modular force of up to 5,000 troops, including land, air and maritime components,” according to a document seen by the Daily Mail.

It said the force could “respond to imminent threats or react quickly to a crisis situation, for example a rescue and evacuation mission or a stabilization operation in a hostile environment”.

But in a move likely to set off backlash today, EU foreign policy head Josep Borrell said soldiers could be sent to war zones without the support of all member states, potentially in violation of the EU’s own founding treaty. block.

Mr Borrell said smaller groups of countries may choose to take action because ‘we cannot decide unanimously on every step of the process’.

He said he would not ask for the unanimity rule to be abolished, but added: “I believe this institutional setting can be ‘flexible’ to act faster and better.”

The plan would give EU members the power to “enable willing and capable European-led coalitions”.

Brexit has opened up the possibility of Brussels creating an EU army. 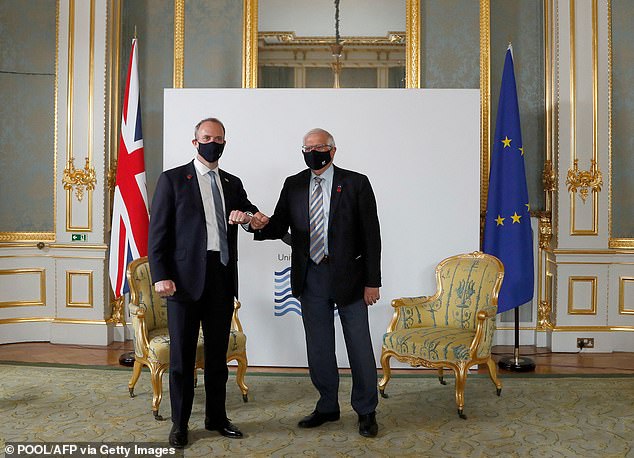 British Foreign Secretary Dominic Raab, left, and European High Representative of the Union for Foreign Affairs Josep Borrell pose for a photo at the G7 foreign ministers’ meeting in London in May this year

Britain vehemently opposed such a plan during its membership, arguing it would undermine NATO.

The EU’s draft documents for the ‘Strategic Compass’ plan were drawn up after European countries were humiliated by the US’s hasty withdrawal from Afghanistan this summer, leaving them incapable of acting alone.

Mr Borrell wrote in the briefing paper that the bloc must begin “learning the language of power.”

The draft plan will be presented to the Ministers of Foreign Affairs and Defense on Monday. It is not expected to be fully approved until 2023.

Travel tests for holidaymakers with double jabs will be abolished…