Get off my GRAPES! English winemaker forced to cover his vines with ugly blue gauze after being targeted by cheeky deer, greedy badgers and thieving magpies (but they seem to prefer white over red…)

By Mark Tovey for Mailonline

A British vineyard has been forced to cover its grapes with nets after greedy wildlife continued to steal their crops.

Little Waddon Vineyard in Dorset is the target of a cheeky family of deer, voracious badgers and thieving magpies and woodpeckers who steal their grapes. 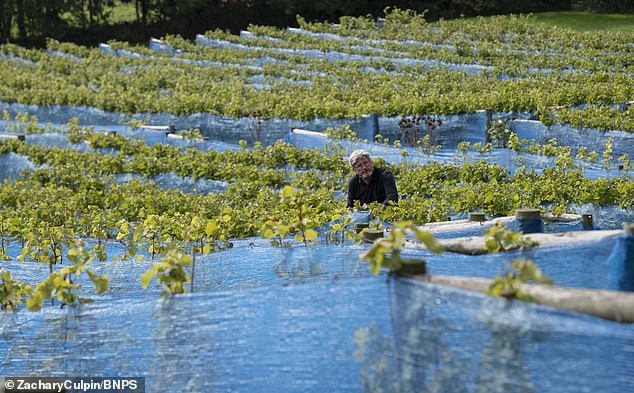 Little Waddon Vineyard in Dorset has had to take drastic measures to protect its grapes. Owner Simon Priestman (photo) inspects the nets 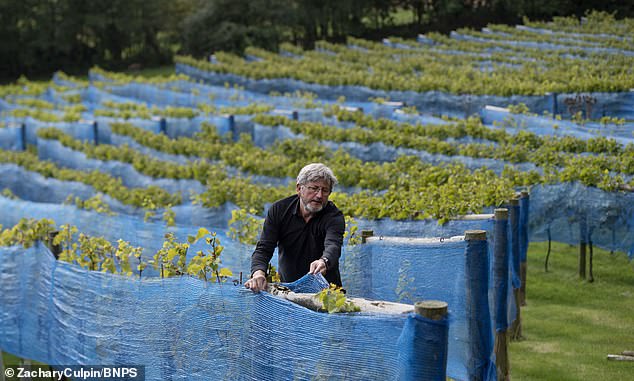 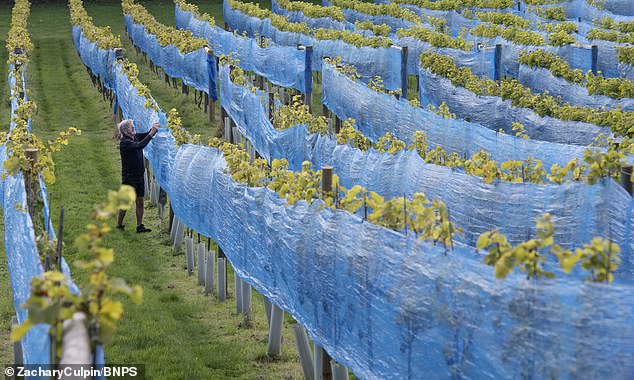 Row upon row of ugly blue mesh is meant to keep out a range of intrusive pests, including the woodpecker – which can destroy grapes at a rapid pace 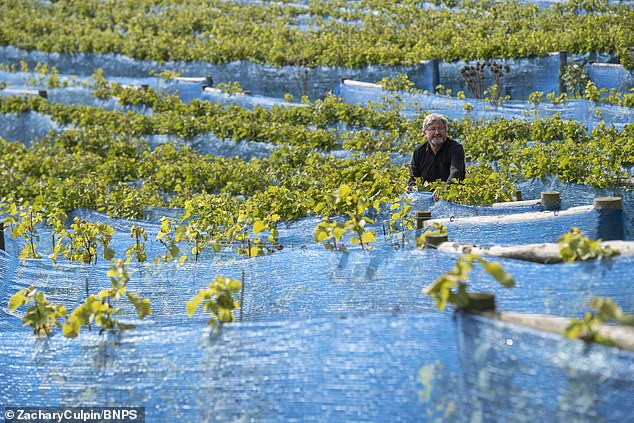 The nets are an insurmountable barrier for badgers. The badger can be a particularly destructive pest to vineyards, whose modus operandi is to jump on vines and pull the entire structure down to earth where it then rips the fruit off 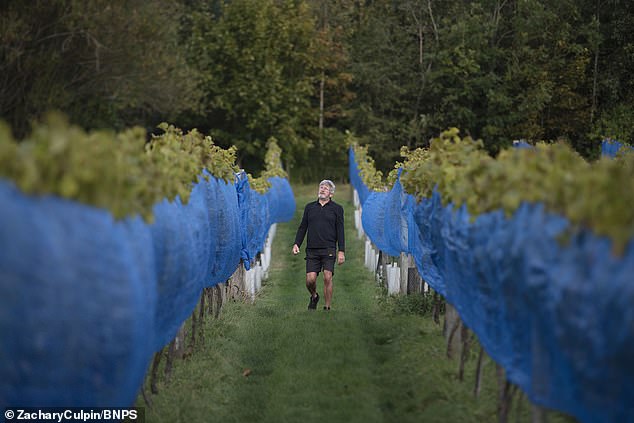 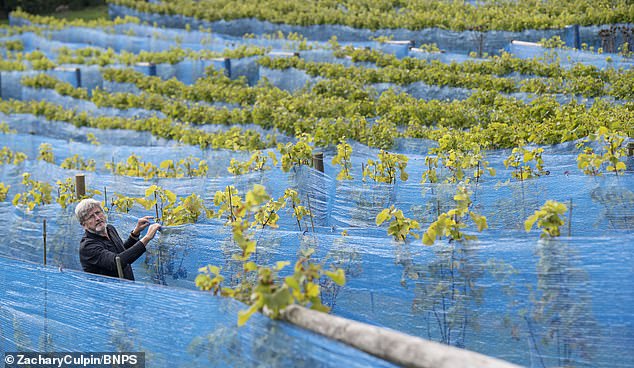 The pest problem dates back to 2018, when husband and wife Simon (pictured) and Karen Priestman took over the vineyard, which was established in 2004 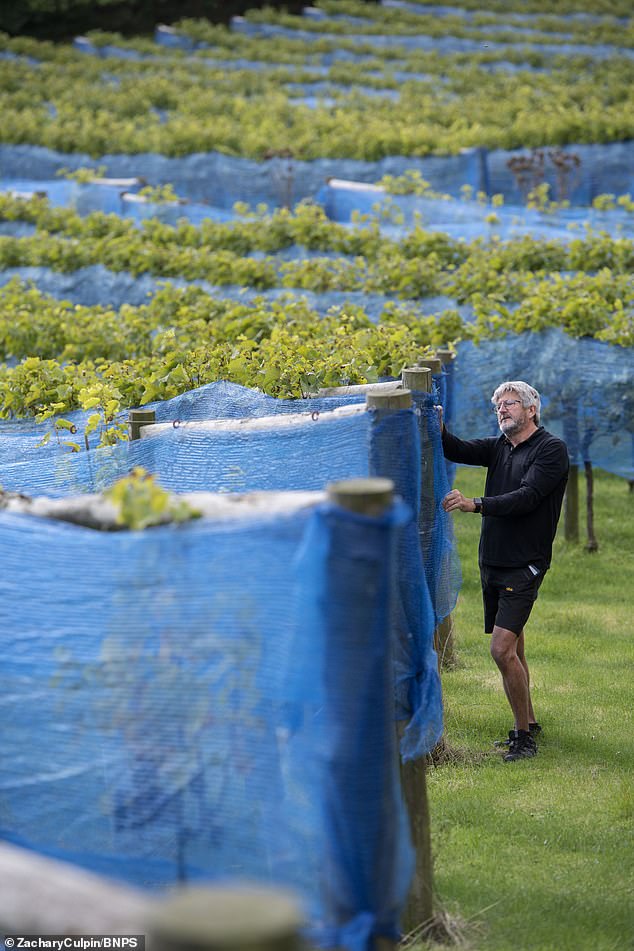 The nets, measuring 6,500 meters in length and covering 4,000 vines, took staff a week’s work to hang 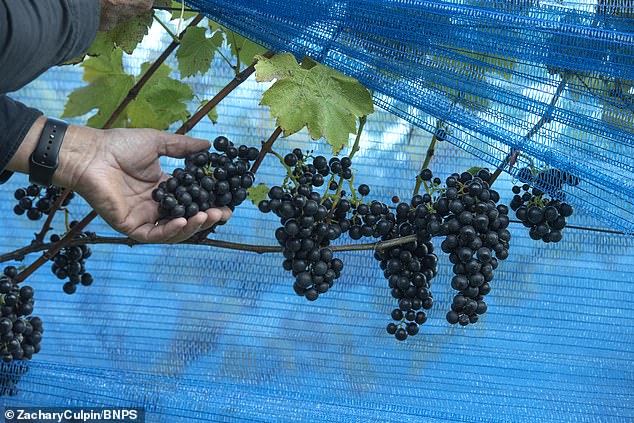 The vineyard was established in 2004, but Karen and Simon Priestman took over in 2018.

HOW MUCH WINE IS PRODUCED IN THE UK?

There are 800 vineyards in Britain.

Wine production by the vineyards for 2020 was the equivalent of 8.7 million bottles.

Of the wine produced, 64 percent is sparkling and 36 percent still.

English wine is now exported to 30 countries – an increase from 19 in 2015. Major markets are the US, Scandinavia and Japan.

Most of the plantings are the three traditional varieties (Chardonnay, Pinot Noir, Pinot Meunier).

They grow three grape varieties – Regent for red wine, Phoenix for white and Seyval Blanc for English sparkling wine – and nature seems to prefer the white.

Karen said, “Since we came here in 2018, we’ve had a problem with wildlife. First we had a whole family of deer come in and happily eat all the grapes. Also in the spring they ate all the young buds.

“Then we’ve had some badgers, they like grapes, but they’re pretty destructive because they jump up and pull them down so they can destroy the vine too.

‘And then we finally had birds. The woodpeckers can destroy a bunch of grapes in 30 seconds.

“We’ve tried other methods to prevent them, such as those kites that look like buzzards but didn’t work. We’ve tried old CDs, everything that flickers, all the usual gardening that growers try.

‘These nets are durable, they last for years, so we can use them again and again.

“It took about a week to hang them up and we’ve noticed a difference since they went up. Although we did have a hole and actually saw a magpie crawling through it.

‘The problem now is that we’ve had a lot of wind, causing the poles to fail because the nets act like a sail.

‘Normally we would have harvested by now, but due to the cold start and the wet weather it has declined. But our grapes look great and are quite plentiful.”