DHS fears up to 400,000 migrants could cross border in October when Biden drops Trump-era COVID rule

Homeland Security Secretary Alejandro Mayorkas reportedly asked his officials whether the department was ready to handle the possibility of up to 400,000 migrants, nearly double the 21-year high seen in July, crossing the border in October.

Despite public attempts to appear in control of the situation at the southwest border, a phone call between Mayorkas and senior officials earlier this week shows a Biden administration scrambling to contain a growing crisis.

Mayorkas asked on the call if the border was ready for a worst-case scenario of 350,000 to 400,000 migrants crossing the border next month, two DHS officials told NBC.

Even the lower estimate would be record breaking, but 400,000 border crossings is nearly double the 21-year high hit in July of 210,000. August saw more than 208,000 encounters at the southwestern border.

The officials said the estimates weren’t based on internal intelligence. Instead Mayorkas and others within DHS are worried about a spike in migrants crossing the border if a court-ordered repeal of the Title 42 expulsion policy takes effect today.

Title 42 is a Trump-era Centers for Disease Control and Prevention (CDC) order that enables any border officer to immediately turn asylum-seekers away during the pandemic regardless of their status. 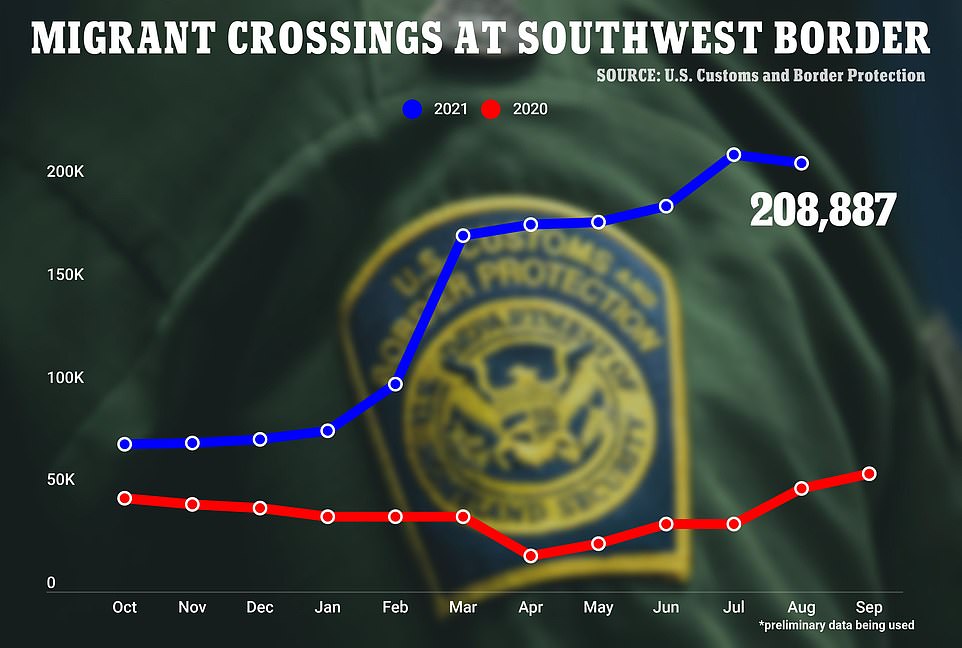 The Biden administration has rolled back its enforcement of the policy somewhat to allow exceptions for unaccompanied minors and some families with young children.

But immigrant advocacy groups and some of Biden’s fellow Democrats are outraged at the White House’s continued enforcement and defense of the rule.

DHS is concerned that with Title 42 gone, however, migrants may misinterpret the shift to mean the border is wide open even as Mayorkas himself insisted last week ‘our borders are closed’ during a contentious Senate hearing.

US District Judge Emmet Sullivan gave the White House 14 days to comply with a September 16 ruling that decided the Trump administration’s policy didn’t give Biden the authority to block migrants seeking asylum.

The administration appealed the ruling but so far the US Court of Appeals has not moved to stop it from expiring.

Biden considered lifting Title 42 in July but officials issued a dire warning: ‘We could have a rush at the border. It would be catastrophic.’

The officials who revealed the Mayorkas call said Customs and Border Protection   has been given no guidance on what to do when Title 42 ends. 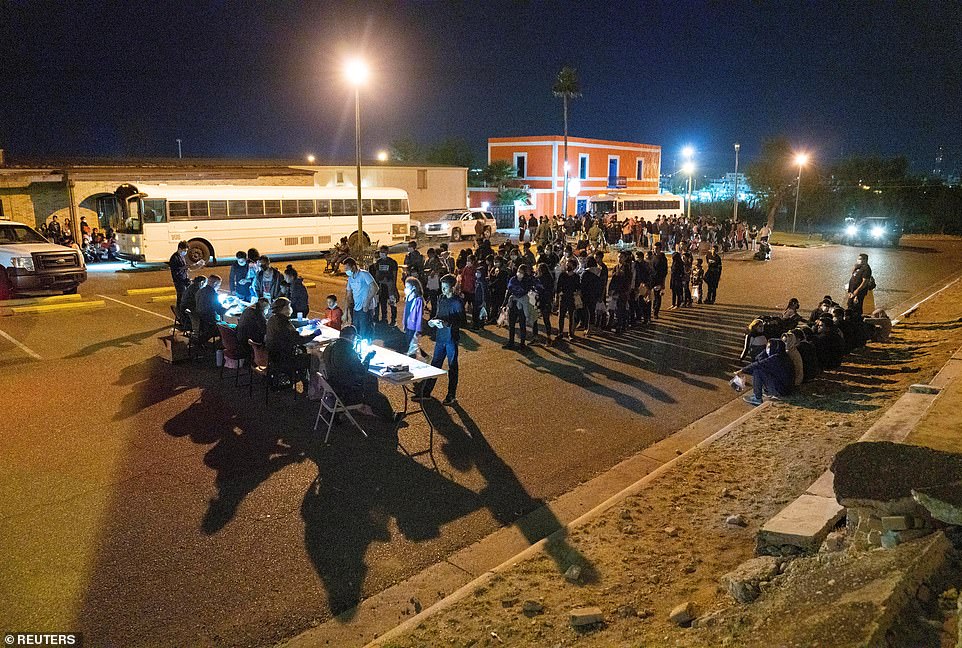 A group of migrants is processed by immigration officials after crossing from the Mexican border in Roma, Texas, U.S., September 30, 2021 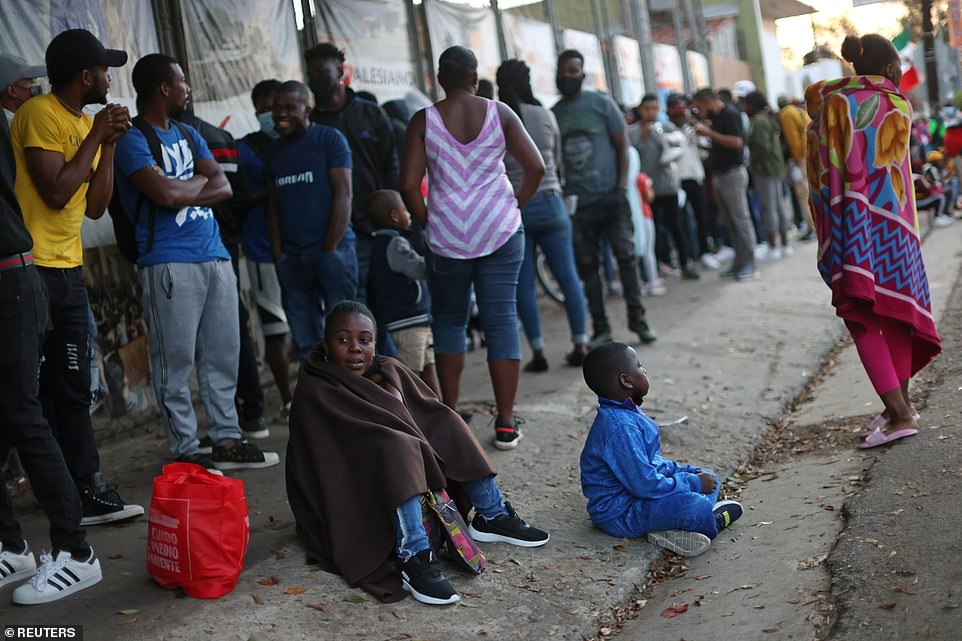 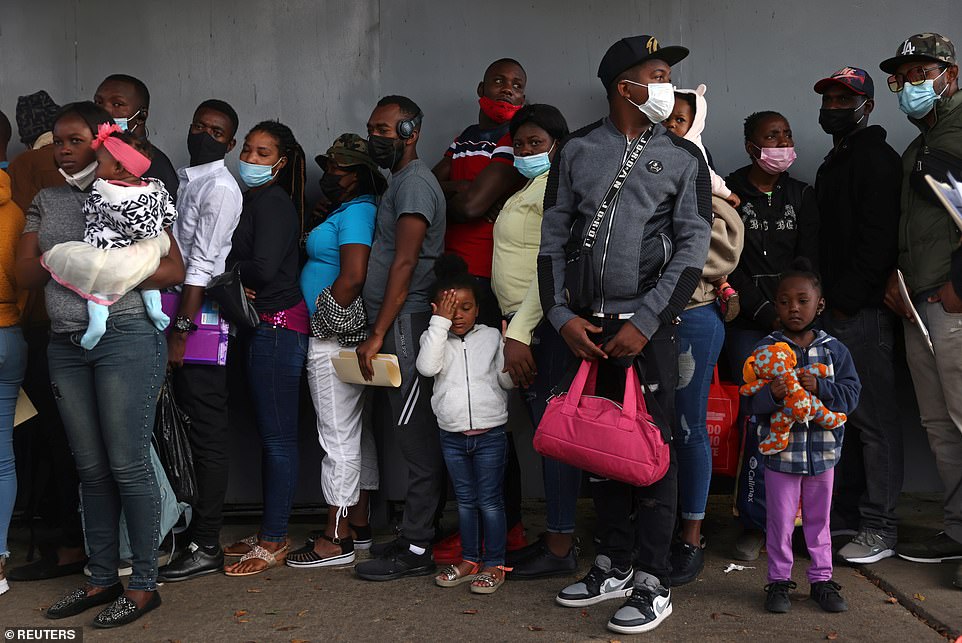 Thousands of mostly Haitian migrants were expelled from an encampment under a bridge in Del Rio, Texas

But Mayorkas did issue new guidelines on to another DHS agency on Thursday.

In a seven-page memo, the DHS chief instructs Immigration and Customs Enforcement (ICE) officers to use discretion and determine whether an undocumented immigrant ‘poses a current threat to public safety’ in deciding whether to deport them. 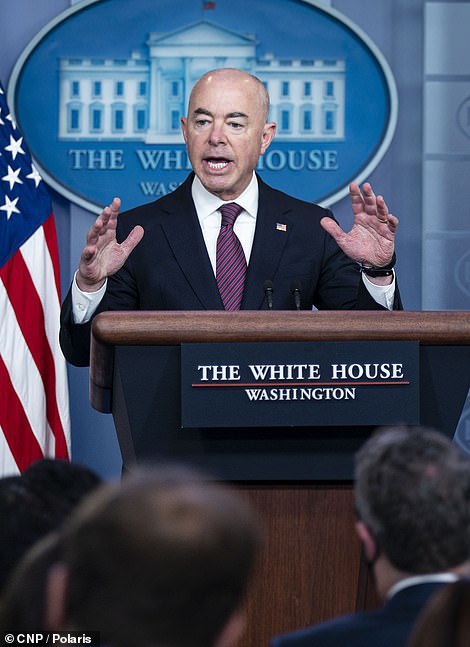 ‘The fact that an individual is a removable noncitizen should not alone be the basis of an enforcement action against them. We focus our resources because they are limited, and because of our dedication to doing justice,’ Mayorkas wrote.

It comes after a week that saw more than 25,000 Haitian migrants arrive in the border city of Del Rio, Texas, quickly overwhelming local officials there.

Border officials worked to quickly clear them out from an encampment under a bridge where many of the thousands had settled.

Mayorkas told the Washington Post that removing a farmworker ‘breaking his or her back to pick fruit that we all put on our tables’ would undoubtedly take resources away from apprehending someone who poses a public threat.

Others he instructed ICE to pass over are the elderly and migrants who speak out at public demonstrations, according to the memo obtained by the same outlet.

‘It instead requires an assessment of the individual and the totality of the facts and circumstances,’ the memo reads.

It leaves little room for ICE to deport anyone other than violent criminals.

For migrants who’ve been apprehended by ICE and have committed crimes, Mayorkas said agents should consider a broad range of factors: How serious their offense was, whether they used a weapon, past criminal history and even when they arrived in the US or have a mental condition.

He also wants them to look at how the deportation would affect the person’s family. 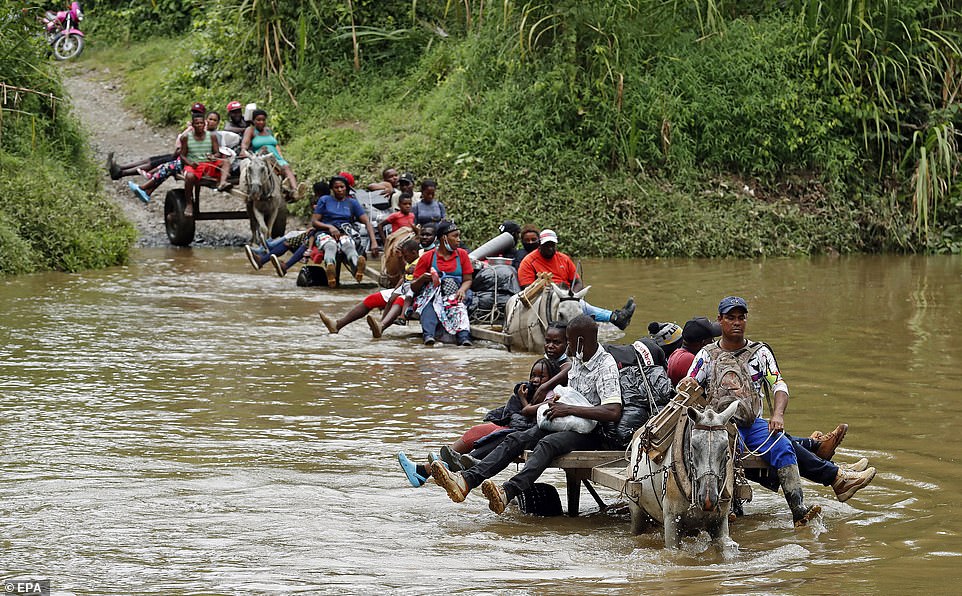 Haitian migrants cross the Guati River during their transfer to a camp where they will sleep to start their journey to the Darien Gap, in Acandi, Colombia on September 28

However, Mayorkas is also giving them more room to weigh all the information for themselves. He’s overwritten temporary guidance issued in February that requires ICE supervisors to approve of some deportation cases to ensure agency compliance.

DHS released a statement Wednesday announcing its intent to issue a memorandum terminating the Migrant Protection Protocols (MPP), also known as the ‘Remain in Mexico’ program.

The order, according to the statement, will come in the next few weeks.

In June 2021, DHS issued a memorandum terminating the MPP that a Texas district court ruled in August violated the law and issued an order requiring the agency to restart the Trump-era program.

In another blow to the Biden administration’s attempt to shut down the program, the Supreme Court in August rejected the Justice Department’s request to put the policy on hold while litigation over Biden’s efforts to rescind the policy was resolved in the courts. 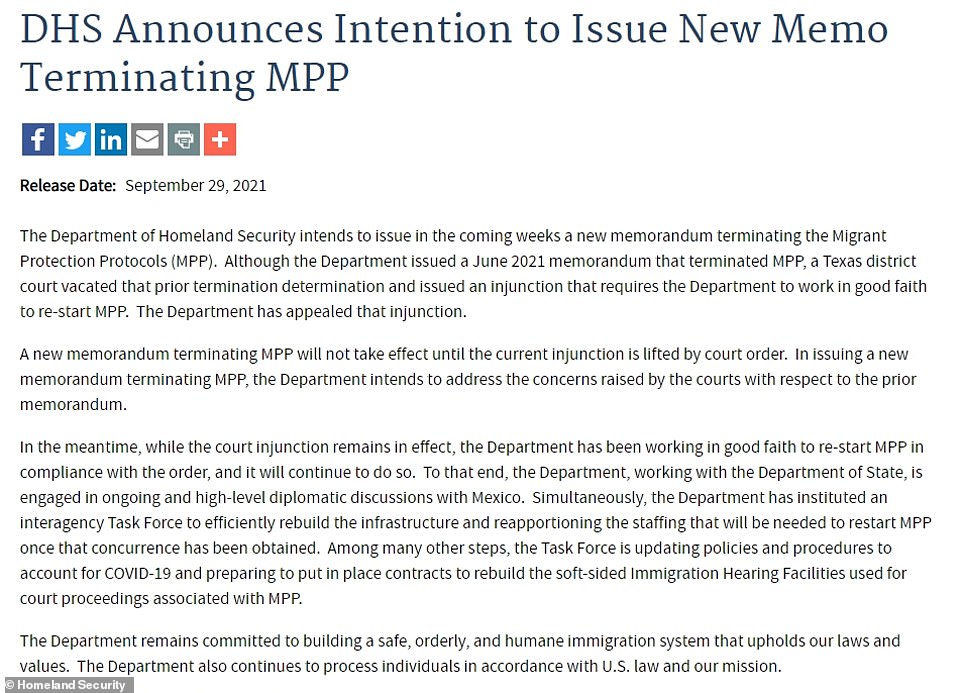 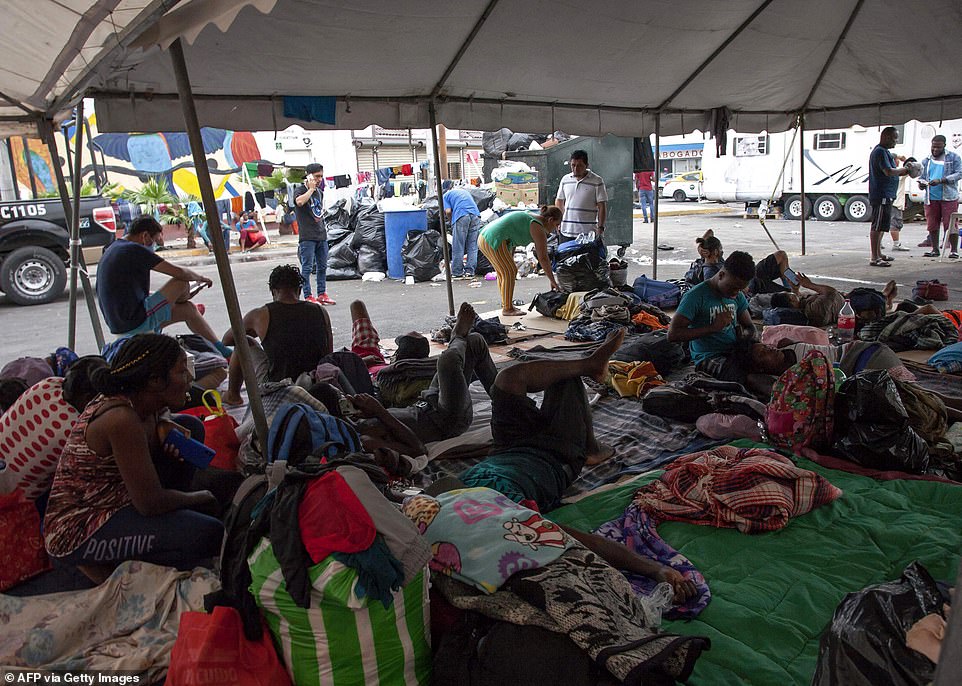 It also comes after thousands of mostly Haitian migrants crossed into the U.S. over the last month. Here the migrants wait in a shelter in Mexico on Tuesday to hear status of their case for asylum in the U.S.

MPP states that illegal immigrants entering the U.S. by way of the southern border may be returned to Mexico to wait during the duration of their immigration proceedings. The deal with Mexico was struck during the Trump administration and makes it so the neighbors to the south are responsible for providing all appropriate humanitarian protections for those seeking entry into the U.S.

DHS assured that until the new memorandum takes effect, it is working to restore MPP in line with order from the Texas court.

‘To that end, the Department, working with the Department of State, is engaged in ongoing and high-level diplomatic discussions with Mexico,’ the agency wrote. ‘Simultaneously, the Department has instituted an interagency Task Force to efficiently rebuild the infrastructure and reapportioning the staffing that will be needed to restart MPP once that concurrence has been obtained.’

‘Among many other steps, the Task Force is updating policies and procedures to account for COVID-19 and preparing to put in place contracts to rebuild the soft-sided Immigration Hearing Facilities used for court proceedings associated with MPP. ‘

President Joe Biden, DHS and its secretary, Alejandro Mayorkas, have received a slew of criticism over the prevailing migration and illegal immigration crisis at the southern border – especially after thousands of mostly Haitian migrants set up camp in Del Rio, Texas this month.

DHS ramped up it’s deportation efforts after a group of around 15,000 of these migrants set up an encampment under and around the Del Rio International Bridge, then proceeded to used a dam to cross daily between their camp in the U.S. and an area to obtain food and resources in Ciudad Acuña, Mexico.

The agency released partial figures last week showing 12 removal flights had taken 1,401 migrants back to Haiti, but at the time said 3,206 remained in custody and 5,000 were still camped out beneath the bridge in Del Rio. This meant that of the 15,000 – 5,000 were unaccounted for in those figures. 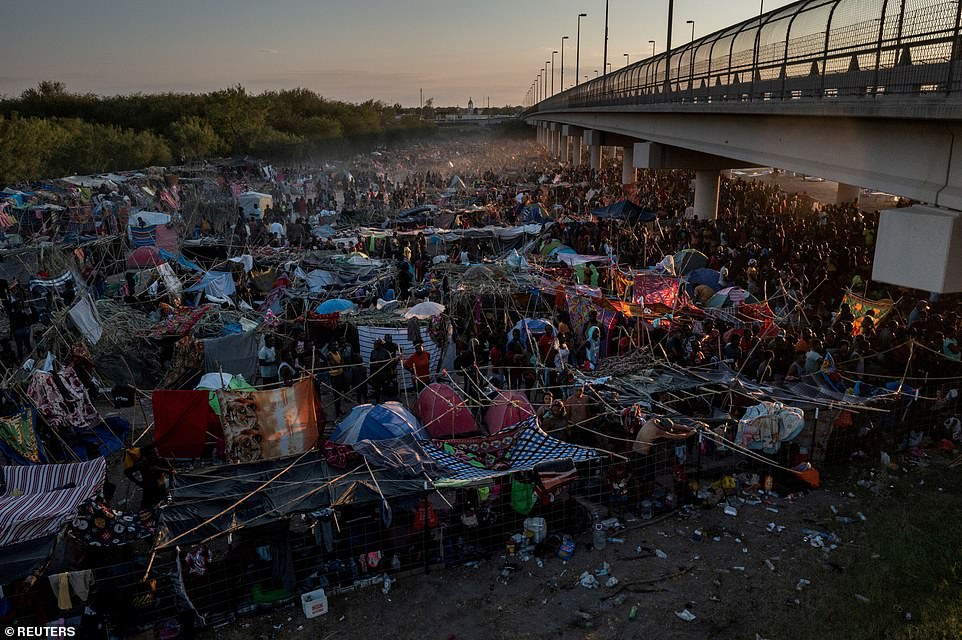 A group of around 15,000 mostly Haitian migrants set up an encampment near the Del Rio International Bridge this month. An image of the makeshift camp here on September 19 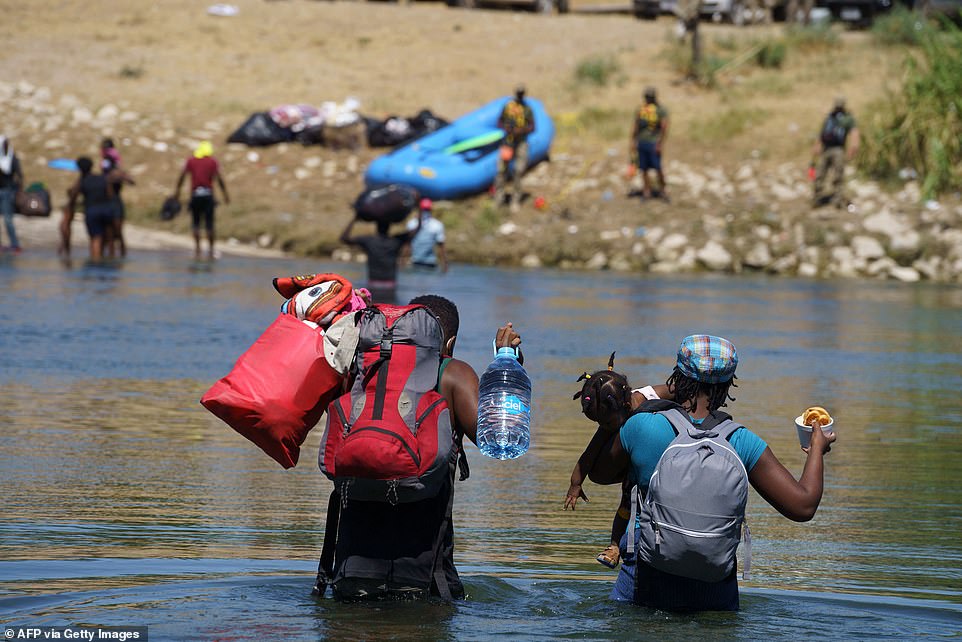 Here Haitians cross the waist-high water in the Rio Grande river on September 23 as they wade back to the U.S. after getting supplies and food from Ciudad Acuna, Mexico

Democrats were enraged when images emerged earlier this month of Border Patrol agents on horseback wielding split-reins. Some accused the agents of using the reins to whip migrants, while agents and witnesses claim they were never used as a weapon, and just a tool to direct their horse and wrangle the illegal border jumpers.

Mayorkas reassigned the agents in the images to administrative duties while an investigation ensues. He also assured civil rights activists, after Representative Maxine Waters called the images ‘worse than slavery’, that agnets in Del Rio are no longer operating on horseback.

Republicans decried the Biden administration for attempting to dismantle MPP, claiming it is one of the successful programs that helped quell mass migration during Trump’s presidency.

Since Biden took office, the rate of illegal immigration has skyrocketed.

July saw the highest number of migrant encounters with Customs and Border Protection (CBP) with 213,534. That monthly figure dipped for the first time since Biden took office in August, when 208,887 encounters occurred at the U.S.-Mexico border.

More than 1.2 million migrants have illegally crossed into the U.S. from February to August.

‘The Department remains committed to building a safe, orderly, and humane immigration system that upholds our laws and values. The Department also continues to process individuals in accordance with U.S. law and our mission,’ DHS wrote in their Wednesday statement.

With Museum to bring back ancient sculpture to Nepal