Barnaby Joyce has likened striking unanimous state agreements on coronavirus to collecting cats, as he warned that a continued pursuit of zero cases would lead to economic collapse.

The acting prime minister said states should rejoin the nation when vaccination rates reach nationally agreed targets of 70 and 80 percent.

“If you want to have zero outbreaks and nobody gets Covid, you could, but we’re going out of business. The economy will collapse,” he told reporters in Tamworth on Tuesday.

Joyce described state lines as random lines and colonial remnants that were a strange way to determine the epidemiology of a virus. 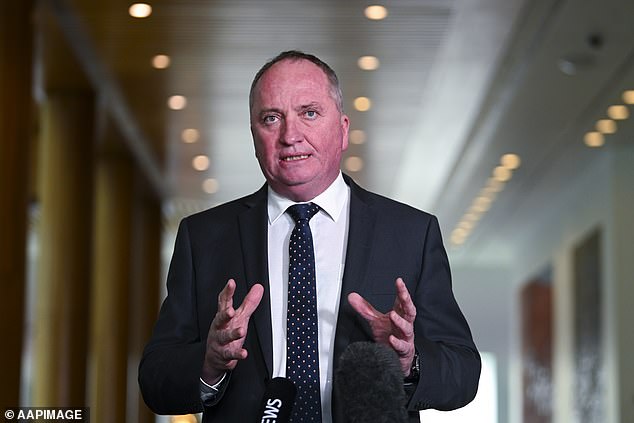 Barnaby Joyce has likened striking unanimous state agreements on coronavirus to cat collecting, as he warned a continued pursuit in zero cases would lead to economic collapse

But opposition leader Anthony Albanese said the federal government should treat states and territories with more respect in an effort to get all leaders on the same page.

“To do that, you have to have less politics and more substance,” he said.

“They’ve made decisions that I probably would have preferred to have been made on a national basis rather than a state basis,” he said.

Joyce said parochial arguments about keeping states safe with measures that worked at the start of the pandemic would not hold up at 70 and 80 percent vaccination rates.

“So the debate continues and it goes from ‘you save me’ to ‘you fucking annoy me,'” Mr Joyce said.

Leading coronavirus experts believe there is now strong evidence that the Delta variant is more deadly than other species the country has fought before.

The Doherty and Burnet Institutes support the findings of a Canadian study showing that unvaccinated people who contract Delta are twice as likely to receive intensive care treatment.

Death is one and a half times more likely than the Alpha variant.

Delta cases continue to rise in NSW, where there were 1,022 new infections and 10 deaths on Tuesday.

Victoria registered an outbreak of 603 cases and one death on the first day of a two-week construction freeze following violent protests.

Australia has fully vaccinated 47 percent of the population aged 16 and over, while 72.1 percent received the first dose.

Pfizer has said it will seek regulatory approval in the US, Europe and elsewhere for the use of the injection in children aged five to 11 years following promising clinical trial results.

Mr Albanian urged the government to plan ahead of pediatric vaccines.

Tobias Menzies dedicates his Emmy win for The Crown to the late Michael K. Williams on Twitter