Global markets were in turmoil yesterday over fears that a debt crisis at one of China’s largest real estate companies could trigger a ‘Lehman moment’, sending the global economy plunge into crisis.

Shares in Evergrande, a builder of luxury condominiums for China’s upper and middle classes, crashed to an 11-year low on the Hong Kong Stock Exchange amid concerns the group could default on its loans, with a major payment deadline approaching. Thursday.

The company’s shares have fallen about 48 percent since late August, when it first warned of a potential default. 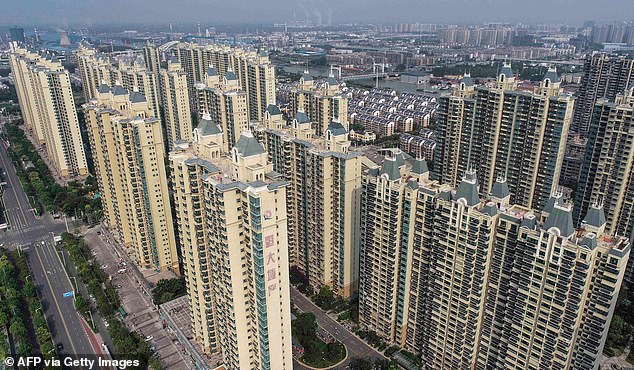 High-rise buildings: a residential complex in Evergrande in Huaian in the eastern Jiangsu province of China. The builder saw shares crash to an 11-year low amid concerns it could fail to pay its loans

Evergrande is one of the world’s most indebted property developers, with debt totaling £217 billion.

If it collapses, there are fears that the effects will hit the broader Chinese economy and create a knock-on effect around the world.

The situation bears a resemblance to US investment bank Lehman Brothers, which catalyzed the financial crisis when it went bankrupt in 2008.

There were already signs of Evergrande ‘contamination’ in Hong Kong markets, with the Hang Seng index hitting a year-long low as the panic kicked in. The mainland Hang Seng real estate index, which tracks the Chinese real estate sector, plunged to its lowest level in four years.

The fallout hit international markets over the course of the day, with the FTSE 100 briefly falling to a six-month low before recovering towards the end.

Blue-chip stocks with large Chinese corporate interests were among the hardest hit in London, with insurer Prudential, which has increased its exposure to Asian markets, the biggest loser on the FTSE 100, down 8.4 percent, or 121p, on 1324p.

Meanwhile, there are fears that the implosion of the Chinese real estate sector will dent demand for commodities, causing spelling problems for the mining sector.

Fears of a slowdown in Chinese demand also hit oil markets, with Brent oil falling 1.6 percent to $74.10 a barrel.

Analysis | What if vaccine advocates actually want people *not* to die?

Rihanna leaves little to the imagination as she releases Savage X Fenty Show Vol. 3 in silver