Chris Whitty urges pregnant women to get vaccinated against Covid 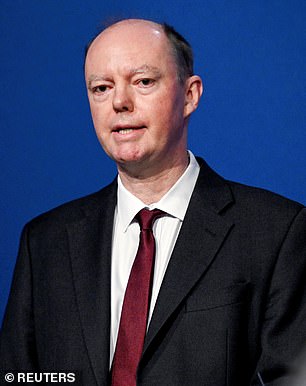 Professor Chris Whitty, England’s chief medical officer, said: ‘All the medical opinion is really clear that the benefits of vaccination far outweigh the risks in every area’

Professor Chris Whitty urged mothers-to-be get jabbed as he shared ‘stark’ figures that just 33 vaccinated pregnant women were admitted to hospital with Covid between February and September.

For comparison, 98 per cent of hospital admissions (1,681) were among unjabbed mothers-to-be.

Professor Whitty told a Downing Street press conference that hospitalisations among unvaccinated pregnant women are ‘preventable’ and it is ‘clear the benefits of vaccination far outweigh the risks in every area’.

There is no evidence that the current crop of Covid jabs harm fertility or are unsafe for pregnant women or their unborn children.

But scores of women have been reluctant to get jabbed due to misinformation and reports of temporary menstrual changes after getting an injection.

Repeat Covid jabs could be offered for ‘years to come’, says SAGE adviser

Britons could be offered top up doses of the Covid vaccine for years to come, a SAGE adviser said today.

He told Sky News: ‘In the longer term, Covid is likely to become endemic and we probably are going to have to manage it with repeated vaccination campaigns for years to come.’

‘If we look at (the trends) we can see that although there has been quite a lot of variation over the past few weeks, and we’re still reporting very high numbers of cases, the total number of daily hospital admissions and the total number of deaths are quite a long way below where we were in November last year, which should give us some level of confidence.’

He added: ‘The booster vaccination campaign is going far better than it was a few weeks ago, but there’s still quite a lot of eligible people who have not yet had their booster jab.

‘So it’s really important if we do want to avoid restrictions ramping up that we get as many of those people out to get their booster jabs as possible over the next few weeks.’

Professor Whitty said: ‘I would… like to pull out in particular the issue of women who are pregnant or intending to get pregnant.

‘And I would just like to give you some fairly stark facts about this because this is a major concern.

‘Based on academic data from February 1 to September 30… 1,714 pregnant women were admitted to hospital with Covid.

‘And if you go to those who are very severely ill in intensive care, of 235 women admitted to ICU, 232 of them – over 98 per cent – had not been vaccinated.

‘These are preventable admissions to ICU and there have been deaths.

He added: ‘All the medical opinion is really clear that the benefits of vaccination far outweigh the risks in every area.

‘So can I please encourage all women who are pregnant or wishing to become pregnant to get their vaccination.’

There is no evidence vaccines are unsafe for women who are pregnant because the side effects reported are similar to those seen among women who are not pregnant.

And real world data shows the virus is a bigger risk for pregnant women, especially if they catch it in their third trimester or have underlying conditions, because there have been more cases of premature and stillbirths among this group.

Data also shows there is no evidence the jabs harm unborn babies and there is no ingredient in the vaccines that can infect a child.

The Association of Reproductive and Clinical Scientists and the British Fertility Society reassured women there is ‘absolutely no evidence’ or mechanism that would allow the jabs to affect fertility.

The press conference came after the Joint Committee on Vaccination and Immunisation today announced Covid booster jabs would be rolled out to 8million people in their 40s, while second doses were recommended for 16 and 17-year-olds.

It said people could come forward for them ‘with the confidence that they are safe and effective’. A total of 12million top-up doses have already been administered. 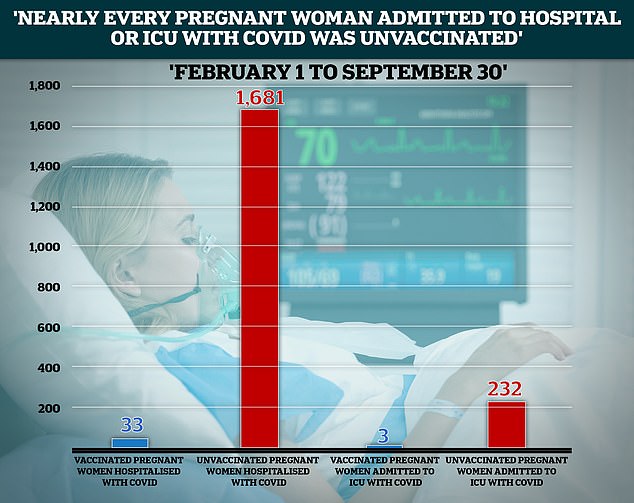 Professor Chris Whitty urged mothers-to-be get jabbed as he shared ‘stark’ figures that just 33 vaccinated pregnant women were admitted to hospital with Covid between February and September. For comparison, 98 per cent of hospital admissions (1,681) were among unjabbed mothers-to-be. And just three infected pregnant women admitted to intensive care were vaccinated, compared to 232 infected unvaccinated women, he said 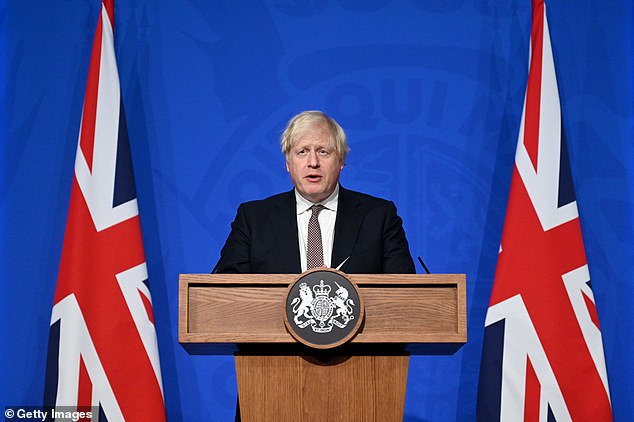 At a press conference following the announcement, Prime Minister Boris Johnson admitted a Christmas lockdown was not completely off the cards and made a desperate plea for Britons to get their booster Covid jabs 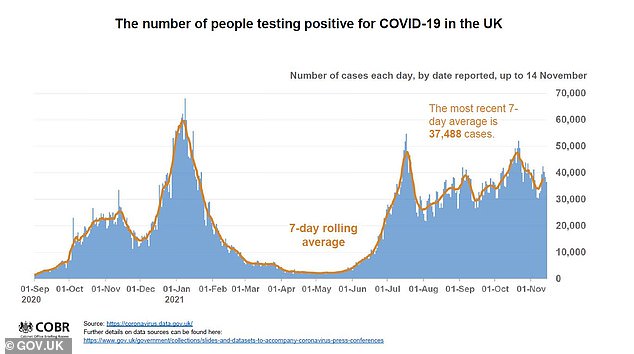 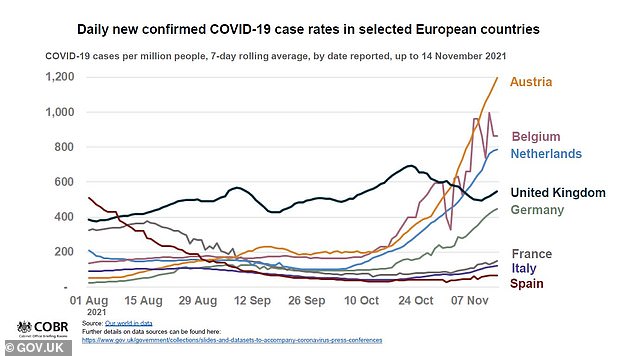 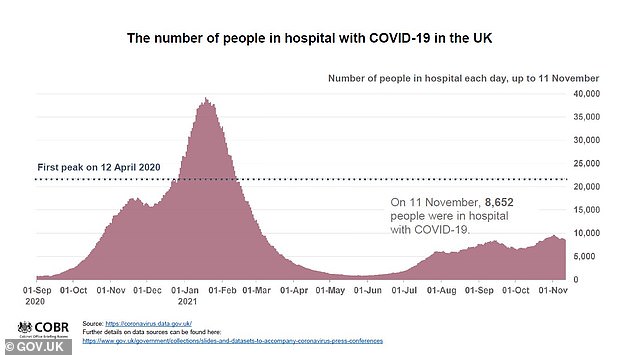 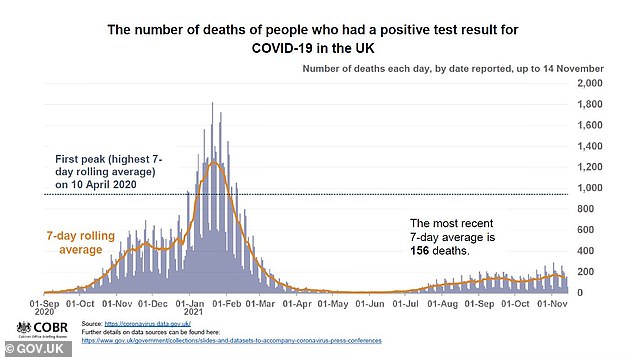 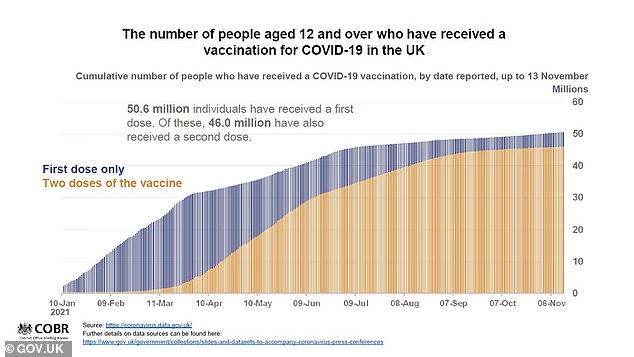 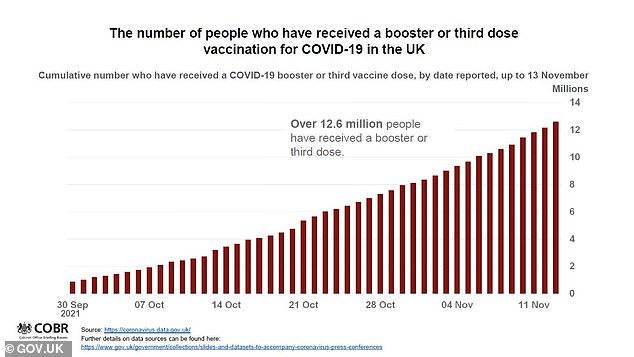 Data published today by the UK Health Security Agency revealed that people who get a third shot are 80 per cent less likely to get symptomatic Covid than those who had their second dose in spring.

There has not been enough time to measure the effect on hospitalisations and deaths but officials claimed protection is expected to be ‘even higher’.

At a press conference following the announcement, Prime Minister Boris Johnson admitted a Christmas lockdown was not completely off the cards and made a desperate plea for Britons to get their booster Covid jabs.

The PM — who appeared to be suffering from a cold — warned that ‘storm clouds’ of infection were gathering over Europe and forcing nations back into restrictions, which highlighted how the UK ‘cannot afford to be complacent’.

He said that if Britons want to ‘avoid restrictions on daily lives’ then they should get a booster, adding that it would be an ‘utter tragedy’ if double-vaccinated people died from Covid because they didn’t get one.

He admitted people might need proof of a booster jab to be considered ‘fully vaccinated’ in the future, in a move which could cause fresh chaos for Britons’ travel plans.

Asked if a lockdown would be necessary if cases continue to rise, the PM said ‘clearly we cannot rule anything out’ but insisted he didn’t ‘see anything in the data that says we have to go now’.

The comments came after Austria announced a draconian new lockdown on the unvaccinated, after a dramatic increase in infections, and the Netherlands imposed a curfew on pubs and restaurants to deal with rising cases.

Germany, France and Italy have also been seeing a significant uptick in their outbreaks. The PM was joined today by his chief scientists Chris Whitty and Patrick Vallance at the Government’s first Covid briefing of the month.

Professor Whitty said that even though the Covid numbers are ‘broadly flat’, there was ‘substantial pressure on the NHS and that is widely recognised by everybody, ministers obviously included.’

‘But in terms of the Covid numbers, they’re not currently going up in the kind of numbers you’re seeing in continental Europe, but obviously if they did that would be a situation where we would have to look again at what the situation is at that stage.’

Q&A: Everything you need to know about Covid vaccines in pregnancy

Are vaccines safe for pregnant women?

There is no evidence the vaccines cause a different reaction in pregnant women.

Side effects reported by expectant mothers are similar to those seen among non-pregnant women.

Real-world data does, however, show mothers-to-be face a greater risk from Covid, especially if they get infected in their third trimester or have underlying health conditions.

The Royal College of Obstetricians and Gynaecologists warn pregnant women are slightly more likely to give birth prematurely or suffer a stillbirth if they catch Covid.

And NHS chiefs last month revealed one in five Covid patients on ventilators were expectant mothers who had not been jabbed.

Could vaccines harm babies in the womb?

Experts have uncovered no proof that the jabs can harm babies in the womb — and insist there’s no reason to suspect they would either.

Covid vaccines do not contain ingredients that are known to be harmful to pregnant women or to a developing baby.

Nor do they contain organisms that can multiply in the body, so they cannot infect an unborn baby in the womb.

Studies of the vaccines in animals to look at the effects on pregnancy have shown no evidence jabs cause harm.

Research from six studies involving 40,000 women show the vaccines don’t raise the risk of miscarriage, preterm birth, stillbirth, or the baby being born smaller than usual or with birth defects.

Can vaccines make it harder to get pregnant?

There is also no evidence the Covid vaccines hamper a woman’s chances of getting pregnant.

The Association of Reproductive and Clinical Scientists and the British Fertility Society says there is ‘absolutely no evidence, and no theoretical reason, that any of the vaccines can affect the fertility of women or men’.

But some concerns have been raised because thousands of women have recorded disrupted period after getting the jabs.

By October 27, the UK medicines watchdog, the Medicines and Healthcare Products Regulatory Agency (MHRA), had received 41,332 reports of menstrual cycle side effects after first, second or third doses of the Covid jabs.

Nearly 50million Covid vaccines had been administered to women up to the same date.

The side effects included heavier or lighter bleeding than usual, as well as more painful periods. But the MHRA said the changes are ‘transient in nature’ — meaning they are short-lived.

Period problems are very common — with up to a quarter of women of childbearing age reporting them at any one time —  and are often triggered by stress.

Why were vaccines not initially offered to pregnant women?

Like other vaccines and medicines, clinical trials of the Covid jabs did not include pregnant women.

This meant the UK’s vaccine advisers, the Joint Committee on Vaccination and Immunisation (JCVI), did not have enough evidence to recommend pregnant women should get vaccinated when jabs were initially rolled out last winter.

But real-world data from the US — where 90,000 pregnant were given doses of Pfizer or Moderna — did not reveal any safety concerns.

So the JCVI advised that these jabs should be offered in the UK.

And subsequent studies show the jabs were just as effective in pregnant women as those who were not pregnant.