Bridgerton’s acclaimed first season was viewed by a staggering 82 million Neflix accounts in one month, new data has revealed.

The steamy period drama – the first run of which focused on the romance between Daphne Bridgerton, (Phoebe Dynevor), and Simon, Duke of Hastings (Rege-Jean Page) – topped the streaming service’s series list, beating dramas including Lupin Part 1 and The Witcher Season One with 76million accounts each.

Bridgerton’s stellar success was revealed in data from the 2021 Code conference, presented by Netflix co-CEO and chief content officer Ted Sarandos, and was based on how many accounts viewed at least two minutes of the title during its first 28 days on Netflix.

Take us back: Bridgerton’s acclaimed first season was viewed by a staggering 82 million Neflix accounts in one month, new data has revealed (above Phoebe Dynevor and Rege Jean Page)

Sex/Life season one, Stranger Things season three and Tiger King also made notable entries on the list with 64 million, 64 million and 67 million accounts.

It also showed that Extraction led the most viewed films list with 99million accounts viewing, followed by Bird Box with 89 million and Spenser Confidential with 85 million.

A further slide ranking Netflix’s top 10 films and series based on their total viewed hours during their first four weeks on the service also saw Bridgerton triumph in the latter category with 625million hours viewed. 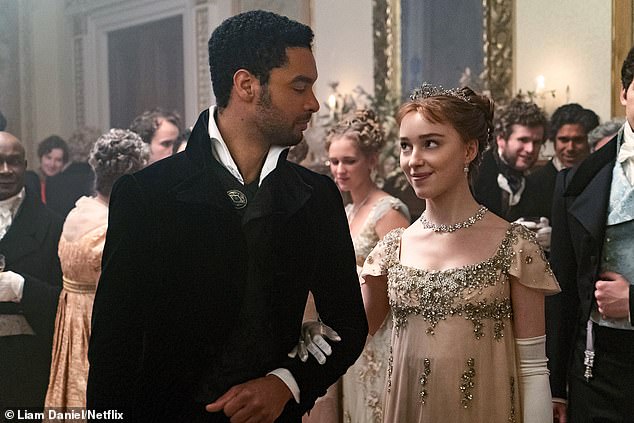 Spellbinding: The first season focused on the romance between Daphne Bridgerton, played by Phoebe Dynevor, and Simon, Duke of Hastings, the role which Rege-Jean Page played 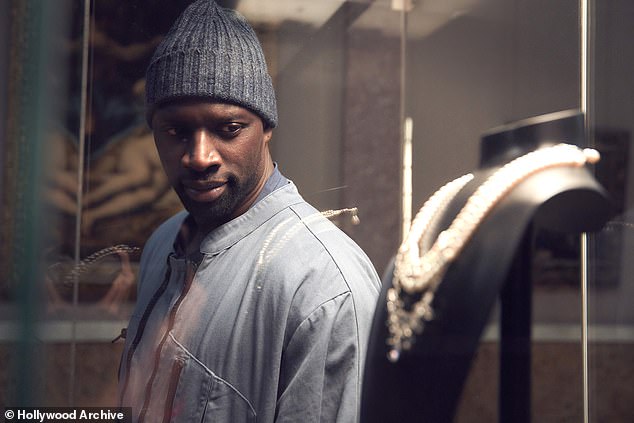 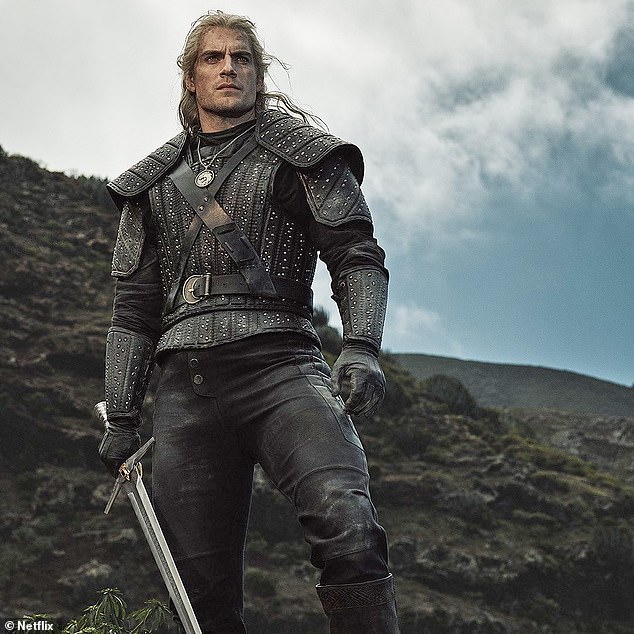 Mysterious: Henry Cavill’s The Witcherseason one was also viewed by 76million accounts 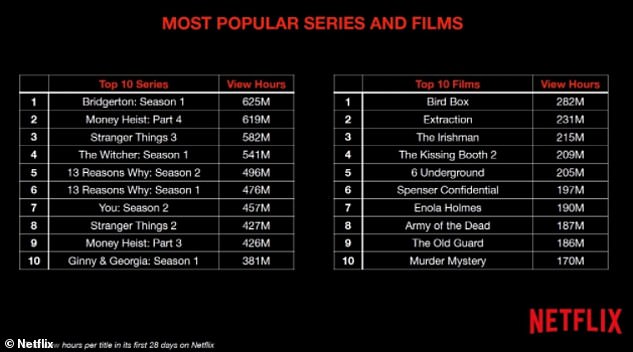 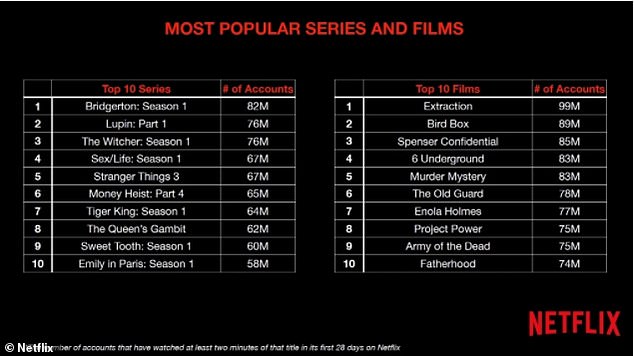 Wow: Bridgerton topped the charts overall for the streaming giant

On the films list, Bird Box topped the charts with 282 million hours, with Extraction just behind with 231 million hours and The Irishman with 215 million.

Bridgerton swiftly became Netflix’s biggest show ever upon its launch in December 2020 – with fans going wild over the antics of the self-titled family and how their lives are turned upside-down by the revelations of the illusive and anonymous Lady Whistledown in London.

New show star Simone Ashley recently dished on series two of Bridgerton in a new video which has given fans an insight into what is to come in series two of the popular Netflix romp.

It comes as new pictures also show newcomer Simone, 26,  playing Kate Sharma, in an intimate chat with Jonathan Bailey’s character Anthony Bridgerton, and she revealed their relationship is set to have ‘lots of arguing and passion.’

Kate’s extended family are introduced to the show while familiar faces including the Bridgertons and the Featheringtons are also set to return in the forthcoming series. 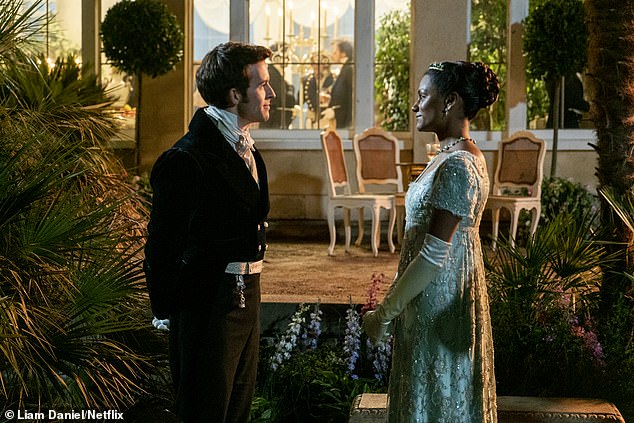 Upcoming: Simone Ashley has dished on series two of Bridgerton in a new video which has given fans an insight into what is to come in series two of the popular Netflix romp

Simone – who also stars in Sex Education – discussed her new role as Kate with her fellow cast members Jonathan, Nicola Coughlan, and Charithra Chandran, in a video which is part of Netflix’s TUDUM event.

Kate will be equal parts headstrong and whip-smart and will ‘stand up to’ macho Anthony, according to co-star Nicola in what the cast members have labelled a ‘volatile’ relationship.

Nicola said of the upcoming on-screen couple: ‘It’s great seeing someone being able to stand up to Anthony and him not knowing how to sort of deal with that. He’s really met someone that’s really his match.’

Anthony will have a bigger role in season two, and even though he is on a quest for love, he will also embark on a journey of self discovery with the actor saying that despite having ‘toxicity’ and being ‘controlling’ in season one he grows into a much more likeable character. 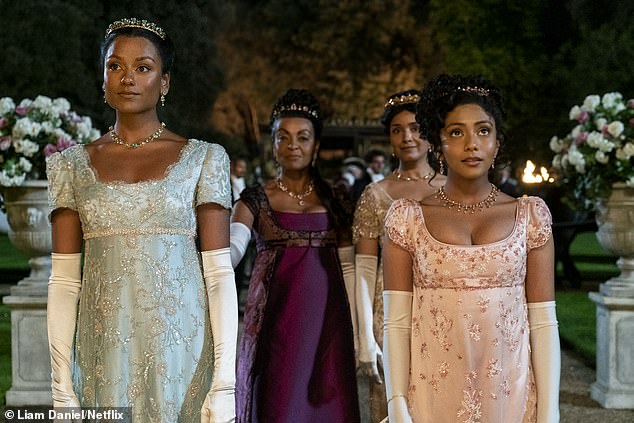 ‘He gets to deal with a lot of things he hasn’t been given the space to deal with. […] I’m completely aware of the toxicity and the control and manipulation of his actions in series one but I’ve never doubted him being a brilliant, complex person.’

Despite this change of character, he joked that the impressive side-burns he sported in season one will once again appear.

The Sharma’s are a new family in the ‘ton’ and the clan also includes Lady Mary Sharma (Shelley Conn) who are pictured with Lady Danbury (Adjoa Andoh).

Mary was the daughter of an Earl, but gave up her title to run away with her true love – a merchant. The scandal that quickly ensued has made Mary somewhat of an outsider upon her return to London society for the debut of her daughters.

Simone said that the family dynamic of the Sharma’s is of sisterhood, and that they have ‘had to adapt a lot’ but they ‘never lose their true selves.’ 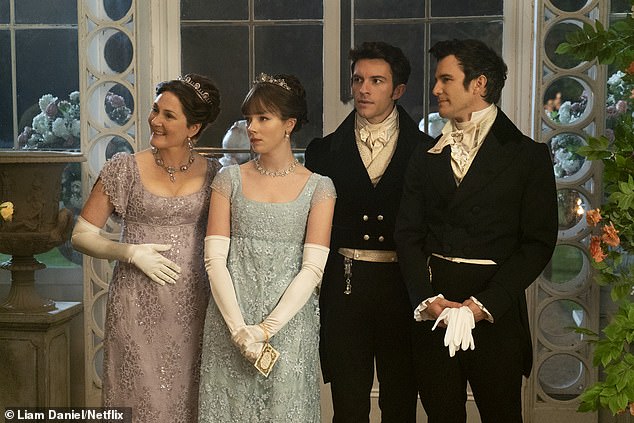 Comeback: Familiar faces including the Bridgertons and the Featheringtons are also set to appear in the series

She continued: ‘We don’t have a dad in our family we have Mary, […] is my step mum and then Edwina who’s Kate’s step sister but regardless of that we’re really close. They’re different to the [other families] because they’ve come to London and had to adapt a lot.’

Nicola, who plays the character Penelope, was revealed as Lady Whistledown in the final scene of series one, in a bombshell final episode which left viewers shocked.

It was revealed by the Derry Girls star in the video that this was not the original ending for her character and what appeared in the episode which aired was a reshoot at a later date.

The creators of the show wanted to leave the story on the cliffhanger but decided against it.

Nicola then alluded to her character having a ‘satisfying’ story arc in season two, but didn’t give anything more away about what is to come for her.

She then went on to reveal that Kim Kardashian is a fan of the show, and often messages her about it.

Hilariously, she dubbed the reality star as ‘Lady Kardashian of Calabasas.’

The show was praised in series one for being inclusive of race, gender and sexuality in both the storylines and casting.

Charithra harked back to her childhood watching period dramas with her mother, saying in the video saying: ‘I never imagined someone who looked like me would be in those outfits in a show like that.’

The first season focused on the romance between Daphne Bridgerton, played by Phoebe Dynevor, and Simon, Duke of Hastings, the role which Rege-Jean Page bade farewell to in April– to the dismay of his many fans. 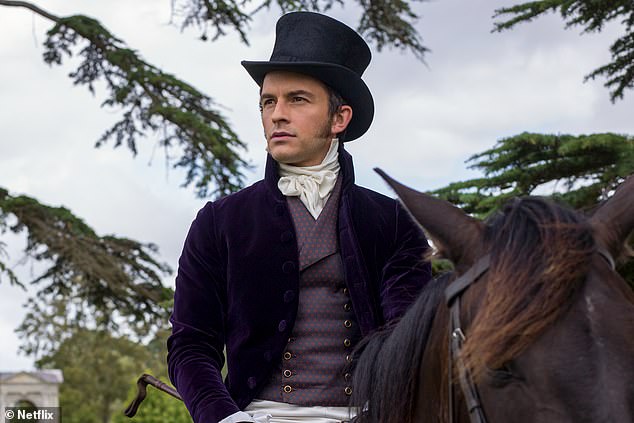 ‘I am so in love with her already’: Newbie Kate put Viscount Bridgerton in his place in a brand new teaser for period drama’s second season on Saturday

Daphne will help navigate her brothers love life – while still being married to the Duke who will not appear.

Bridgerton is Netflix’s most-watched series ever, as more than 82million households tuned in to watch after its release on Christmas Day last year.

Renewed for a second, third and fourth season, the next is based on Julia Quinn’s second Bridgerton novel The Viscount Who Loved Me. 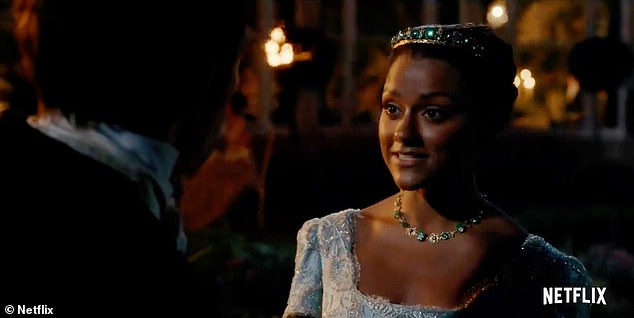 The discussion comes after a first look teaser for the highly-anticipated second season of Netflix’s Bridgerton dropped on Saturday.

The clip saw Kate defiantly confronting Anthony in a bid to call out his objective views of women.

The show-stopping clip begins with the titular character entering the garden announcing, ‘I can hear…’ before Kate interrupts, ‘Pardon me, my Lord.’ 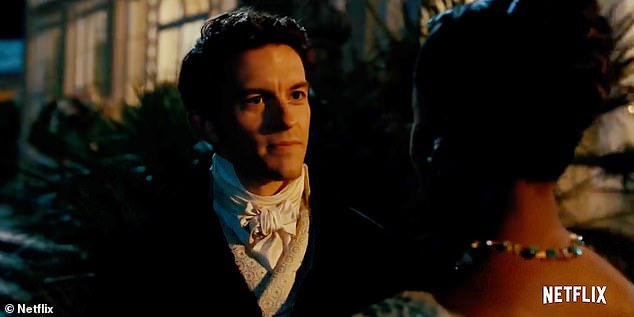 Look of surprise: ‘When you manage to find this paragon of virtue, what makes you think she will accept your suit?’ she asks the Viscount in the show-stopping trailer

‘I never got your name. I was wondering if we would meet again,’ says Anthony, to which Kate sassily replies, ‘So you might discern if my wit is acceptable, my manners genteel?’

‘You were eavesdropping,’ he says.

‘It was hardly an effort. Seeing as you were proclaiming your many requirements for a wife loud enough for the entire party to hear,’ the newcomer says.

‘You take issue with my requirements,’ Bridgerton questions. 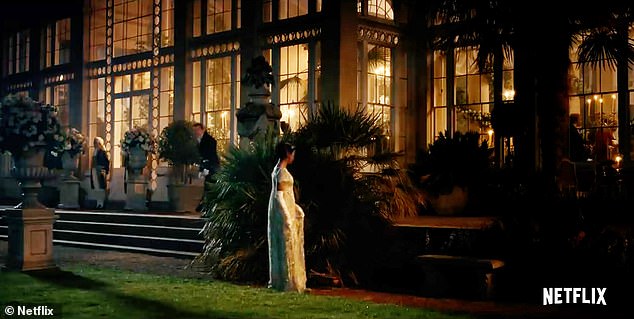 Hilarious: Adding that Bridgerton’s opinion of himself is ‘entirely too high,’ she concludes, ‘Your character is as deficient as your horsemanship’

‘I take issue with any man who views women merely as chattels and breeding stock,’ Kate declares.

‘None of that was meant for…’ Anthony insists before he is cut off with, ‘Viscount Bridgerton, yes, when you manage to find this paragon of virtue, what makes you think she will accept your suit?

‘Are the young ladies of London truly so easily won by a pleasing smile and absolutely nothing more?’

The teaser was introduced by Jonathan and co-star Nicola, who jokingly warned fans to ‘prepare thyself.’

Bridgerton production reportedly ground to a halt once again late last month after bosses muddled up positive and negative COVID-19 tests, according to The Sun.

In August, production resumed on the second season after two positive coronavirus tests shut it down – but the set experienced a further minor delay due to the testing gaffe, meaning it was not known which test belonged to whom.

It was alleged due to a positive test among the tests, bosses on the set in High Wycombe, Buckinghamshire had to retest the entire cast and crew and wait for the results.

A source said: ‘Nothing can account for mistakes, sadly, and producers cannot take any chances, given it could quickly tear through cast and crew and shut production down for a while. The tests were cross-contaminated, meaning they all had to be done again.’ 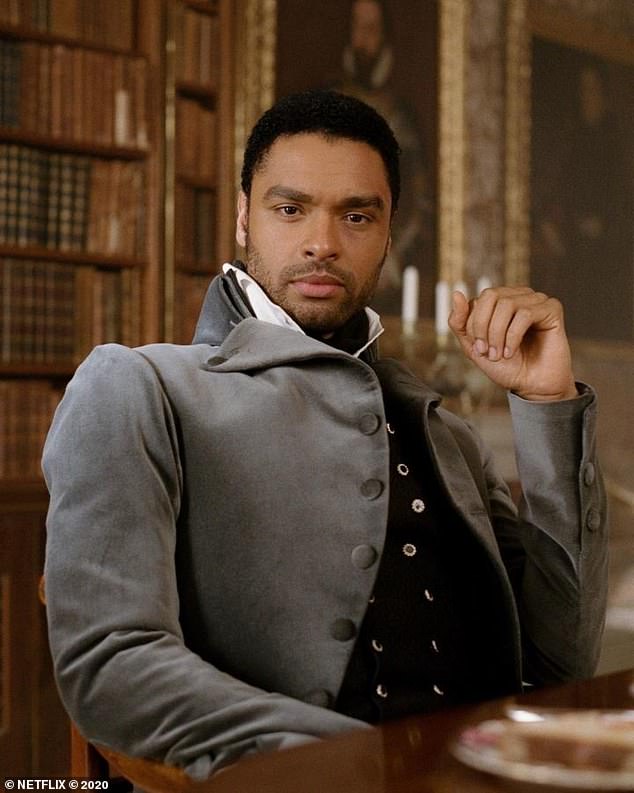 Exit! Rege-Jean left fans disappointed when he revealed he won’t be starring in the follow-up season, after alluring legions of admirers

Mothers at risk of preeclampsia should be given aspirin to stop condition, US medics